What is Super System Optimizer?

Developed by Systuit Inc., Super System Optimizer is a system tool that you should better not trust. Although it boasts to be super and capable of optimizing computers in a very comprehensive way, it’s just a catch to make you install it. According to security experts, Super System Optimizer may be referred to as a scareware as it tend to scare its users into thinking that their computers are contaminated with tons of useless files, registries, outdated apps, junk, etc. in order to make them buy a licensed version to fix supposed issues.

Although it can be downloaded from the Internet with a reason, most frequently it enters systems without requiring authorization directly. Usually, it is attached to other freewares and sharewares; therefore, unless it is deselected during freeware’s installation, it slithers onto the system silently. Once installed, it may show you how it loads its scanners and initiated a full system check. Right after it delivers search results, which usually contain a long list of file names. Although it may seem convincing, clicking on the ‘Fix’ button will help nothing except redirect you to the official website of this tool and ask you to buy a full version. Don’t slip on this trick because the majority of issues that Super System Optimizer finds are bogus. Even more, it might take the names of random files from your PC’s system removal of which may result in boot problems or damage of other important programs. Moreover, it may decrease your PC’s performance, speed, and may even install cookies to track you and spread non-personal data to third parties. All in all, although Super System Optimizer is not a malicious application, it’s developers use unfair tactics to earn the money. Therefore, you should remove this rogue without any delay. The best way to do that is to run a full system scan with Reimage Reimage Cleaner . 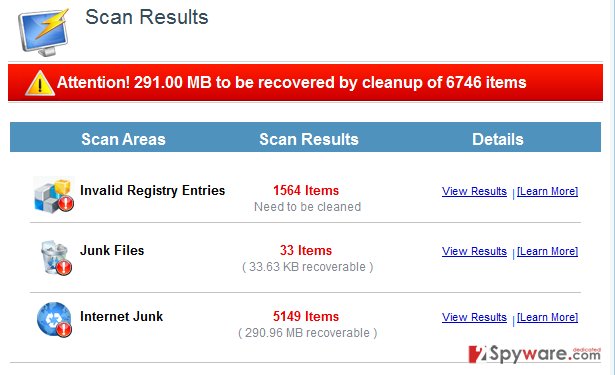 How can Super System Optimizer hijack my computer?

Super System Optimizer used to have the official website with an active download button. At the moment of writing, the website is down, which means that you will not be able to install this tool manually. Nevertheless, it still spreads as an ‘additional component’ of other freewares and sharewares, such as download managers or media players. Security experts warn that software bundles that contain Super System Optimizer virus are very common on third-party download websites, such as Cnet, Softonic, Soft32, Download, and so on. Therefore, whenever you decide to install a freeware on your computer, select Advanced or Custom installation option, follow every step attentively and unmark ticks saying that you agree to install Super System Optimizer or another similar tool, for instance, A1PCCleaner, Advanced System Protector, Driver Performer, and so on. In case Super System Optimizer has already started its fake scans, then remove this tool without any delay.

Super System Optimizer is not worth keeping. If it’s already running on your computer, then remove it by performing these steps:

Nevertheless, after that we recommend checking your computer with a reputable anti-spyware in order to make sure that it’s virus and PUP-free. You can use one of the following programs:

You can quickly scan the QR code with your mobile device and have Super System Optimizer manual removal instructions right in your pocket.