Tik Tok ads is an annoying ad campaign that turned into a nightmare for YouTube, Snapchat, Twitter and other application users 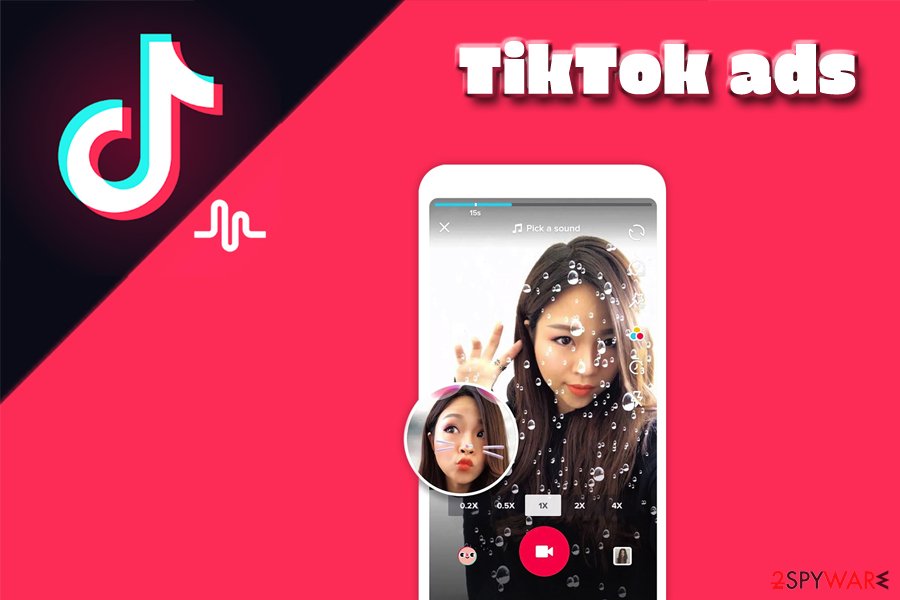 Tik Tok ads is an annoying advertisement campaign started by a ByteDance – an internet technology company from China. Initially, many people praised the app as an alternative to many social network platforms. The application TikTok was first launched in 2016 and since then got immensely popular reaching over 500 million global users. Additionally, it acquired a similar app called Muscal.y and later merged it with TikTok. It allows users to make and share short videos (usually 15 seconds long) with everyone. However, because the app reached great success in China, it started to spread elsewhere – the USA and Europe. Due to increasing popularity, app developers launched various ad campaigns (e.g., #ImaDoMe), promoting TikTok on Snapchat, YouTube, Instagram, and Facebook. The Tik Tok ad problem is especially prevalent in Asian countries like Thailand and Japan, although American users complained as well.

According to users, these ads are everywhere: Google Chrome, Internet Explorer, Mozilla Firefox, Safari, iOS, macOS, Windows. While many users tried to disable ads by reporting it Google – it did not help. Tik Tok ads removal might be tricky, but please check the bottom section for complete instructions.

Many users complained that they are shown a girl in Tik Tok ads, while others see creepy men making weird noises. If anything, most of the users found these ads disturbing and some even raised concerns to whether or not the app is save to used for teens below 16.[1] 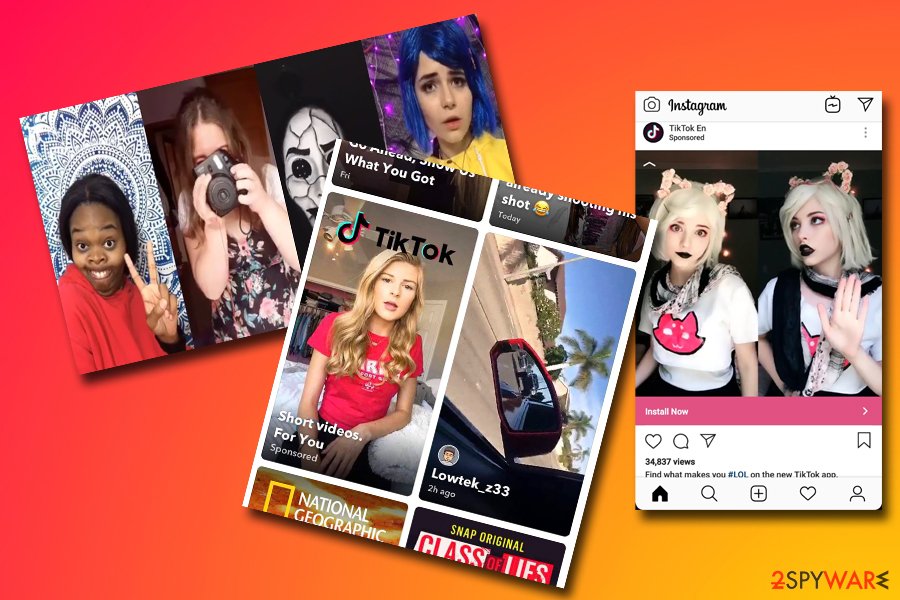 Additionally, videos like “TikTok cringe compilation” or 'MORE Cringe TikTok Ads!” are flooding YouTube as a way to make fun of low-quality ads made by random users. Finally, some users showed concerns about ads being sexist or even racist.[2]

I've been getting the same Tik Tok ads.

At first I thought it was because I had watched some or Pyrocynical's videos on TikTok but now I see that everyone getting these ads.

Now nearly every time there's an ad on a video, it's a TikTok ad.

glad i'm not the only one suffering from these, the worst thing is it's not just youtube with this stupid ads, they're all over my instagram and snapchat.

These ads are a cancer on the Internet. They show up everywhere. It's another stupid trend. Call me Grandpa Kyle Broflovski, but that's how I feel.

AND THEY SHOW UP EVERYWHERE. Just like Monday.com ads on the New York City Subway.

TikTok ads might be associated with adware[4] applications. Ad-supported software is usually disguised as an allegedly useful app, such as system optimization tool, add-on or a toolbar. However, as soon as users install it, they notice the increased amount of pop-ups, deals, offers, coupons and similar unwanted content plaguing their browsers.

If that is the case, you should use out instructions below, and you will be able to remove Tik Tok ads from your machine. Additionally, you should scan your computer with Reimage Reimage Cleaner Intego or similar PC repair software to make sure your system is running smoothly.

However, in most cases, it is not adware that is causing TikTok ads to appear. ByteDance spent a lot of money on advertising campaigns. Thus, users might be seeing it without having adware on their PCs. In such a case, the best way to avoid Tik Tok would be to install ad blocking program, such as AdBlock or uBlock, although this solution is not optimal. 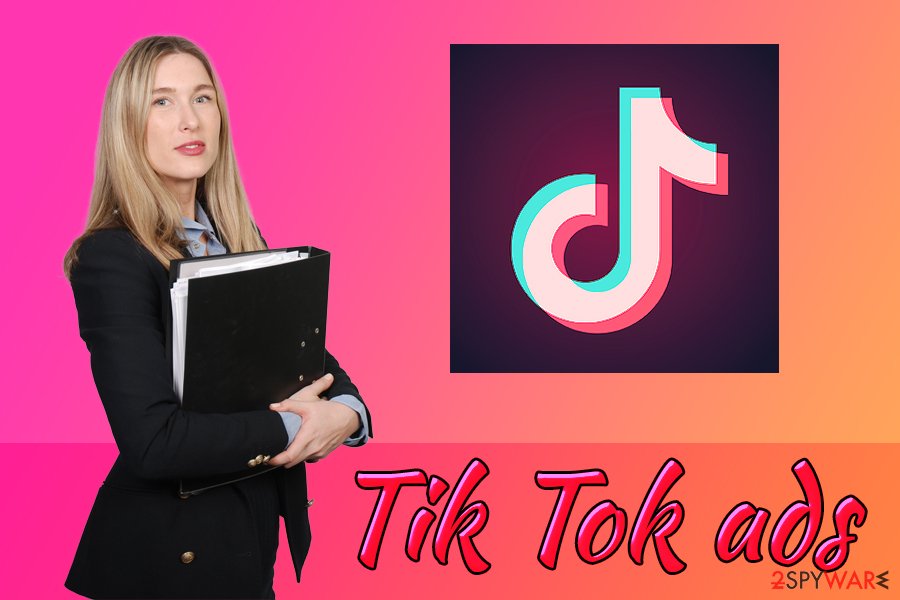 Software bundling is a widely practiced tactic when it comes to potentially unwanted programs distribution. While marketers are quick to put the practice in use, there are not as many end users who are aware of this trick. Freeware authors often collaborate with each other, promoting the sponsored application by inserting it into their installation wizards. Unfortunately, they (purposely) fail to adequately disclose the full extent of the installation, sneakily asking users to opt for Recommended or Quick installation settings.

However, this is where most users make a mistake and avoid picking Advanced/Custom installation mode. For that reason, the full list of applications about to be installed remains hidden from the user, although, he or she technically agree to install them. Therefore, do not let tricky marketing practices fool you – select Advanced mode and deselect all the pre-checked boxes.

Get rid of TikTok ads

As we already mentioned, if the annoying ads are related to adware, you should use our instructions below to eliminate it. Alternatively, you can remove Tik Tok adware with the help of reputable security solutions that specialize in PUP elimination.

However, we suggest manual Tik Tok removal first. Please enter the list of apps via Control Panel (Windows) or Applications folder (Mac) and get rid of all questionable applications as explained below. We suggest you try all apps, even if they come from a well-known company. For example, some users reported that they got rid of a similar problem after they uninstalled Amazon assistant.

If that does not help, experts advise using an ad blocker. This is not an optimal solution as it might prevent you from supporting artists that you like on YouTube or other platforms but at least the annoying TikTok ads will be gone. Unfortunately, the targeted advertisementis here to stay, and it is ruining many peoples' day.[5]

To remove Tik Tok ads from Windows, follow these steps (please not that the method only works if adware is hiding in your PC):

Get rid of Tik Tok from Mac OS X system

To get rid of the PUP on macOS, follow these instructions:

Once these steps are finished, Tik Tok should be removed from your Microsoft Edge browser.

In case adware made changesto Mozilla Firefox, reset it the following way:

You can quickly scan the QR code with your mobile device and have Tik Tok ads manual removal instructions right in your pocket.