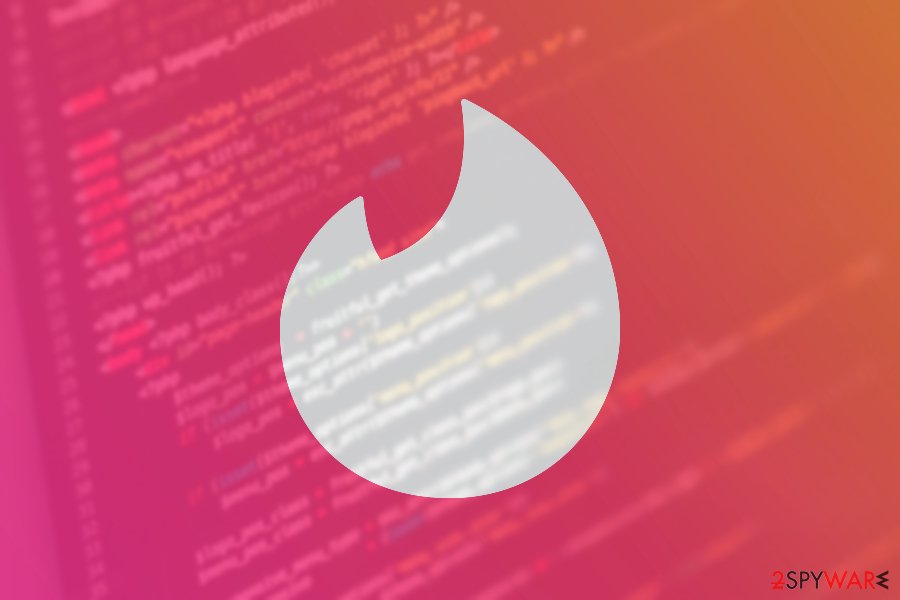 Tinder virus is a term used to describe various scams and hoaxes on a popular dating app. The purpose of these activities are typically used for getting sensitive user’s information, such as credit card details, or promoting various games, applications or websites.

“Catfishing” cases and Tinder bots are quite common nowadays. Most of the time, they are willing to trick you into clicking a suspicious link, filling surveys, installing shady apps or performing other activities that require entering personal information or credit card details.

However, in some cases, users might be tricked into installing malware to their devices. Numerous malicious programs might be spread via dating app, including, ransomware, spyware, data-stealing trojans, adware or other mobile malware. Thus, in such case, Tinder virus removal with Reimage Reimage Cleaner Intego or another anti-malware is needed.

Variants of Tinder scams and hoaxes

If you are not aware what is Tinder, you might be happily in love or married. However, it’s a location-based dating app that allows getting to know people in your location. The app was released in 2012 and instantly became popular worldwide. Thus, there’s no surprise that cyber criminals stepped in there too.

During the past couple of years, numerous versions of Tinder malware, scams and bots were detected. Criminals use clever social engineering techniques to trick users who hope to find love. Today we are going to present the most popular scams spreading on the dating app.

The first account verification scams were noticed in 2016. [1] The scam is designed to trick users into verifying their Tinder accounts. When a user matches with a bot, he or she receives a friendly and flirty message. Thus, it’s hard to suspect that you are talking with a robot.

However, the conversation usually is shifted in a way that user is asked to verify his or her account in order to prove his/her identity. Bot gives legit reasons, such as to make sure that a person is not a criminal.

Thus, if a user is convinced into clicking a link provided by a bot, he or she is redirected to a third-party website. Despite the fact, the domain includes the name of “tinder,” this site has nothing in common with a dating app. However, users are asked to enter personal information, including credit card information.

Victims who fell fro Tinder virus lost hundreds of dollars for signing up for a fake Tinder verification service. Keep in mind that, verified accounts feature do exists on Tinder. [2]However, it’s available for famous people and does not require registering in shady third-party sites. 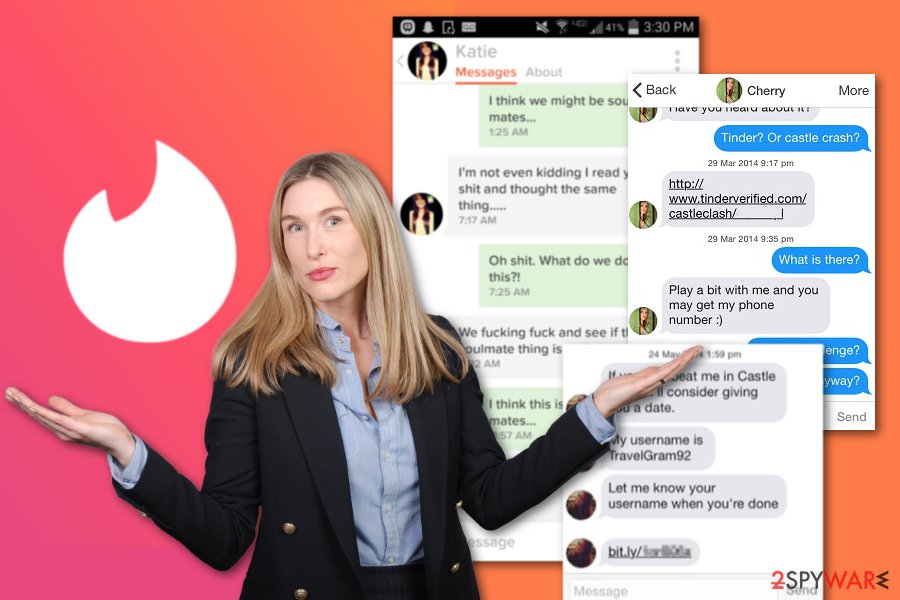 Scam bots are widely used in the dating app too. Numerous bots were detected within the years promoting online games, chatting app or other applications. One of the most well-known cases were reported in 2014 when scammers promoted Castle Clash game.

Victims received a link to tinderverified.com website from one of their bot-matches. According to the reports,[3] users from the United States were redirected to the game download page. However, users from the UK were asked to fill numerous fake surveys.

Human scammers can cause the biggest damage to Tinder users

While previous two versions of Tinder scams were used by bots, this one includes real people. There’s no doubt that humans are better in psychology and social engineering than bots. Thus, this type of scam can cause the biggest damage to users.

This version of Tinder virus is also known as “catfishing.” Scammers create a fake profile, possibly of a real person, and then they start a conversation. As soon as an online friendship or relationship is established, they start telling stories and asking to lend money for various emergencies,[4] for instance, paying hospital bills.

Most of the time, real scammers ask to move the conversation outside the Tinder, such as email. In some cases, scammers trick people, usually women, into sending compromising pictures and then threatens into posting them unless they pay the money.[5]

How to spot Tinder virus

If your Tinder match sends you suspicious links and asks to verify your account, suggests installing unknown apps or games, the chances that you are dealing with a bot are high. Other signs that might identify Tinder scam are:

Security specialists from dieviren.de[6] also warn that clicking on such links or downloading content from there might lead to infiltration of mobile malware, such as Android virus or iPhone virus. Therefore, you should stay away from questionable links received from unknown Tinder matches.

If you realized that you are dealing with a bot on Tinder, you should unmatch with it and continue swiping until you find a real human being. However, if you have clicked on a link or installed some applications, you should focus on Tinder virus removal.

In order to remove Tinder virus and clean your smartphone from possible cyber threats, you should obtain a mobile security program, such as Reimage Reimage Cleaner Intego, and run a full system scan with it. Within a couple of minutes, all malicious components will be wiped out entirely.

You can quickly scan the QR code with your mobile device and have Tinder virus manual removal instructions right in your pocket.