Trojan:win32/Tiggre!rfn is a virus that secretly mines cryptocurrency and causes slow downs and related problems on the system 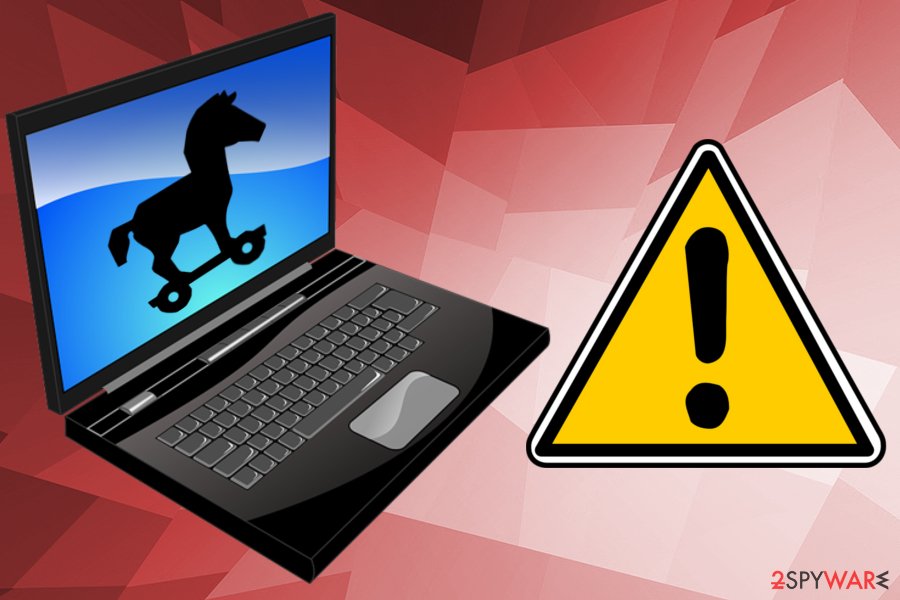 Trojan:win32/Tiggre!rfn is a malicious program created by cybercriminals to mine cryptocurrency on victims’ computers. The malignant file is sent out to users as a video file, but, in reality, it is AutoIt script that runs specific tasks to misuse computer's resources for making cryptocurrency. At the moment, Windows security software is detecting it as Trojan:win32/Tiggre!rfn. However, you can also find this threat under other names, including TROJ_DIGMINEIN.A (Trend Micro), Trojan.GenericKD.12694003 (BitDefender), W32/Autoit.CGO!tr (Fortinet) and others. If any of these names comes on your computer's screen, make sure you take needed actions to stop malicious activities on your computer.

As soon as win32/Tiggre!rfn virus is delivered, it modifies registry entries[1] and makes other changes to users’ computers to ensure its presence each time Windows start. Additionally, malware disables any security software located on a targeted computer, making it much harder to detect and delete. To ensure full elimination, reboot your PC in Safe mode and scan your computer with Reimage Reimage Cleaner Intego or another reputable security tool.

The malicious file arrives at the victims’ systems with the help of other malware programs or is downloaded from malicious websites. Trojan also was noticed to be spread via Facebook Messenger. Therefore, users should be careful while downloading files from Facebook.

win32/Tiggre!rfn trojan affects all versions of Windows, including Windows Vista, Windows 7, Windows 8 and others. It drops an executable file called cherry.exe. This file can be found in the task manager with its original location being %Application Data%\{User name}\cherry.exe.

Cryptojacking is a term used to describe a process when hackers employ malicious software to farm cryptocurrency (like Bitcoin, Monero, Ethereum and many others) every time the machine starts. Alternatively, a malicious script ran online can execute the same process without intruding computers directly.

The most significant problem of a trojan that it typically does not expose many symptoms. However, the crypto-mining virus usually has one distinctive feature – it slows down the CPU[2] and GPU performance considerably because cryptocurrency mining uses a lot of computer resources to solve complex mathematical problems.

Not only simple tasks might become hard to accomplish because of high CPU usage, but even simple ones like loading a webpage or rebooting your PC might take a very long time. This might decrease the life of your CPU or damage it beyond repair because of the overheating issues. If your PC started to behave sluggishly, its time to perform a full computer scan and instantaneously proceed with Trojan win32/Tiggre!rfn removal.

Another nasty trait of a trojan horse is that it can open the door to other malicious infections, including spyware, keyloggers, ransomware, other trojans and similar. These dangerous viruses can steal and share personal information, lock up your files and even lead to hardware failure. 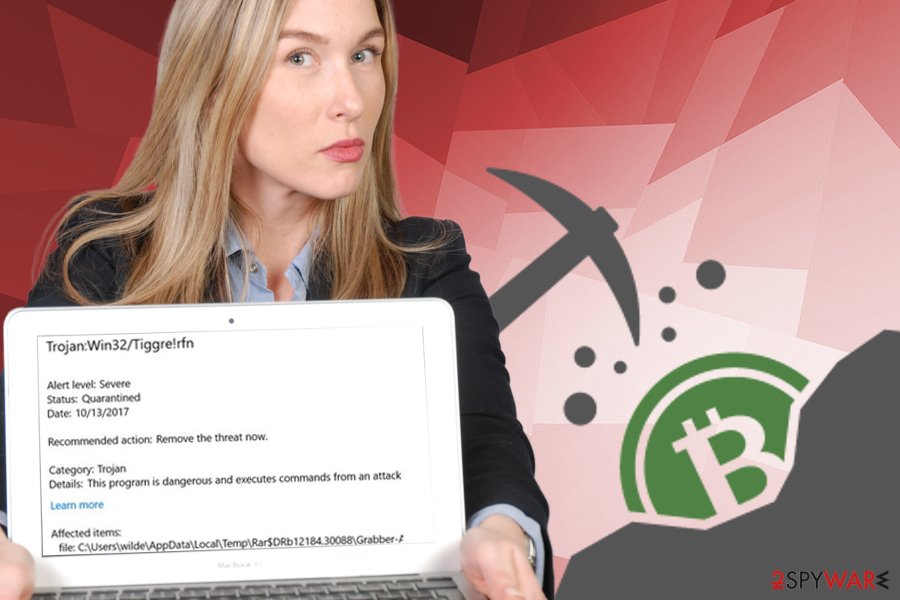 Ways to protect yourself from harmful trojan horses and other malware

Malware can cause extreme damage, not to only your computer but can endanger your virtual safety too. Therefore, it is vital to know how malicious programs are distributed to be able to protect yourself from them.

Trojan win32/Tiggre!rfn elimination can prevent your CPU from overheating

We do not recommend manual Trojan win32/Tiggre!rfn removal. Trojan horses are dangerous and complicated viruses, and its elimination requires in-depth computer system files knowledge. Besides, tampering with system files can permanently damage your OS.

Thus, we advise you to remove win32/Tiggre!rfn virus using powerful security software. We recommend using Reimage Reimage Cleaner Intego, SpyHunter 5Combo Cleaner or Malwarebytes. Do not forget that the trojan will not let security software to start properly. Therefore, you need to restart your PC in Safe Mode with networking and start the security program from there.

To make sure the anti-virus program can start correctly, reboot your PC in Safe Mode with Networking. Please follow these steps:

Finally, you should always think about the protection of crypto-ransomwares. In order to protect your computer from Trojan win32/Tiggre!rfn and other ransomwares, use a reputable anti-spyware, such as Reimage Reimage Cleaner Intego, SpyHunter 5Combo Cleaner or Malwarebytes

You can quickly scan the QR code with your mobile device and have Trojan win32/Tiggre!rfn manual removal instructions right in your pocket.