Trojan:win32/tiggre!plock is the virus that can negatively affect the performance and state of the security 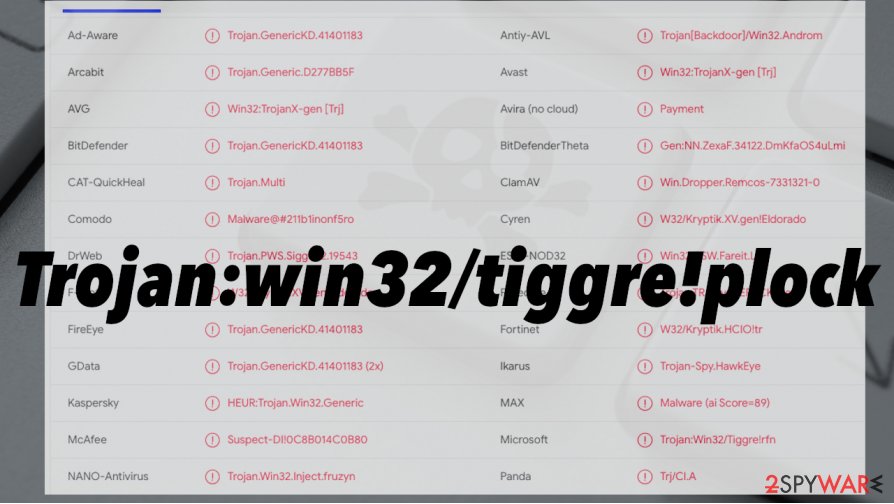 Trojan:win32/tiggre!plock is the trojan detection result that shows up on the screen once the infection is detected. Unfortunately, there are no particular indications or symptoms that could indicate this infection, so people[1] keep complaining and asking questions about the particular heuristic name and the intruder associated with it. There are many things that malicious actors can run the malware for, so your device can get damaged significantly when the malware is present. Sometimes a particular number of samples can show that the threat is widely spread and can be more dangerous than any other typical trojans or malware infections. It is hard to determine the particular threat and the name is also not identifying anything.

However, Trojan:win32/tiggre!plock virus is the Windows operating system specific threat that should be investigated when anti-malware tool reports the possible danger. It can be an indicator of a damaging infection that distributes other threats or even directly installs ransomware.[2] It is common for malware of such type to be the vector for threats like money-demanding malware.

Trojan:win32/tiggre!plock is the threat that infiltrates the system silently and triggers issues with the system when all the processes and programs that this virus installs triggers damage to system functions and security. This malware can be set to perform many different functions because it is silent and can be extremely intrusive, dangerous.

You should remove the threat as soon as possible. Especially when the virus is detected and anti-malware tools determined that Trojan:win32/tiggre!plock removal is needed. You can trust the AV engine and quarantine the virus, delete it from the machine directly. Trojans can be persistent, so you might reboot the machine in Safe Mode before you launch any of the anti-malware tools. 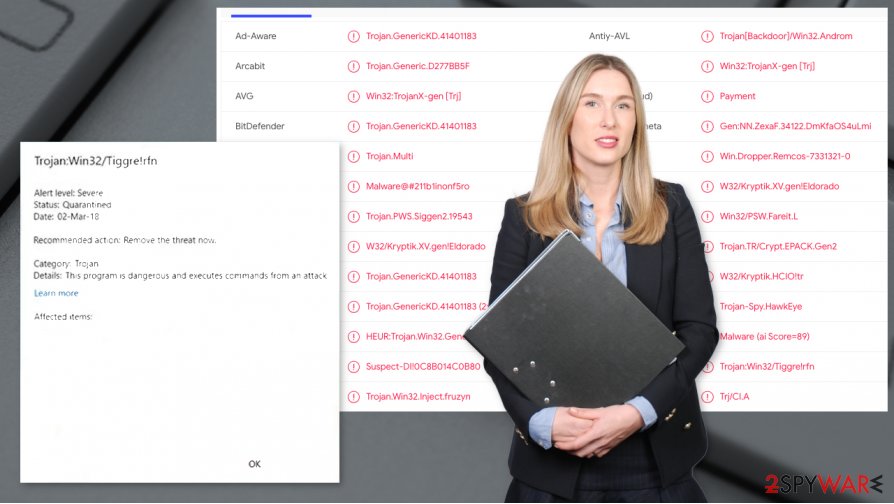 Trojan:win32/tiggre!plock is the name of a trojan that gets detected suddenly. This particular alert shows that machine is possibly affected by the trojan. Unfortunately, you cannot remove Trojan:win32/tiggre!plock easily by running through the programs or files on the machine. There are many issues that this infection creates, so you should get a proper anti-malware tool and launch the proper check on the system. Try SpyHunter 5Combo Cleaner or Malwarebytes for this step though there are many different databases that AV tools use, so detection and success of the termination depend on that.

Trojan:win32/tiggre!plock also can trigger the execution of other programs and files, so your machine gets further affected when you allow the intruder to run for a while. Make sure to avoid those infections or remote access attacks by eliminating the virus yourself. Experts[3] note about the danger level of these threats.

Commands, processes, and other threats can affect the system and interfere with the persistence of the virus. Also, changes in the system folders, functions, and programs make the infection last for a while undetected. Run a check using ReimageIntego or a similar tool, so you can clear any Trojan:win32/tiggre!plock damage.

Trojan:win32/tiggre!plock - the threat that can damage files, registry entries and programs on the machine.

Trojans spread the same as other silent infections

Fake error messages can wrongfully report issues with your machine or applications, gadgets, operating systems, so you fall for the error and think that the update or installation is needed. However, these downloads mainly lead to issues with malicious files, so the download is not related to problems on the computer.

This issue with malicious files can also trigger issues when you receive spam emails. Those notifications contain malicious attachments in the form of MS documents or JavaScript files. Once such a file gets opened, the payload of the malicious program is dropped and activated. The process is not noticed by the user, so infiltration happens silently.

Clear the machine form traces of any malware and eliminate Trojan:win32/tiggre!plock trojan

You cannot know how long this Trojan:win32/tiggre!plock virus has been active on the machine, so you need to run the proper anti-malware tool and clean the system fully, so these infections cannot lead to anything more damaging or dangerous. Rely on the professional application to get better results.

To remove Trojan:win32/tiggre!plock with all the associated programs and files, intruders, you need to run SpyHunter 5Combo Cleaner or Malwarebytes, so the software designed to fight malware can find the infection files and terminate the trojan fully. Then you need to double-check and ensure that the machine virus-free.

When you completed Trojan:win32/tiggre!plock removal, you should also clear the damage of this threat and try to alter files and functions that malware triggered while running in the background. The proper system optimization tool like ReimageIntego or a repair application can help with affected files and OS features.

Reboot the system in the Safe Mode with Networking, so the AV tool can run properly and find Trojan:win32/tiggre!plock malware

System Restore can help you with malware termination

Finally, you should always think about the protection of crypto-ransomwares. In order to protect your computer from Trojan:win32/tiggre!plock and other ransomwares, use a reputable anti-spyware, such as ReimageIntego, SpyHunter 5Combo Cleaner or Malwarebytes

Your opinion regarding Trojan:win32/tiggre!plock Cancel reply

You can quickly scan the QR code with your mobile device and have Trojan:win32/tiggre!plock manual removal instructions right in your pocket.