Vghost.exe is a BitCoin miner that eats up CPU resources 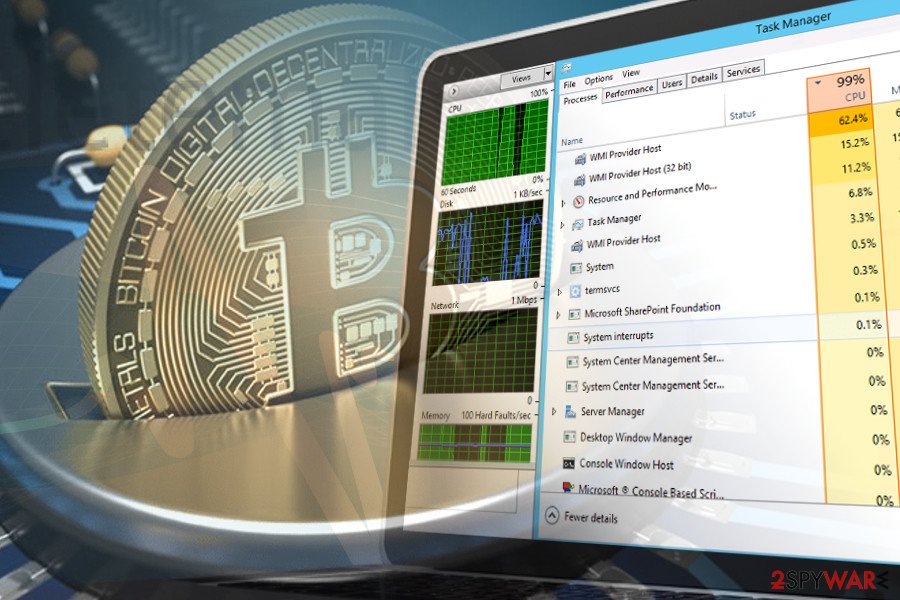 Vghost.exe is a malicious process that may be running in the background of your PC and draining CPU and GPU resources to mine cryptocurrency BitCoin. The file is dubbed as Crypto Miner or BitCoin Miner,[1] while technically it's known as a Trojan horse. According to technical security ratings, it's 56% dangerous, especially when located in sub-folders of the user's profile folder. The Vghost.exe miner is extremely intrusive and can lead to severe system's problems due to overused CPU and GPU resources.

After an in-depth analysis of this file, it turns out that the Vghost.exe mining activity reached the peak in March 2018. IT forums are full of threads on how to remove Vghost.exe virus. Some people claim that it's exceptionally immune to removal, though it cannot be disabled via Task Manager. Any attempt to stop it from running ends up with a pop-up saying:

Vghost.exe Not Found Could not find this item Verify this item's location and try again.

Trojans are dangerous. They have been developed to camouflage useful programs to prolong their existence and initiate malicious activities, such as leakage of personal files. The Vghost.exe Trojan does not seem to target sensitive data. Its task is to root into the OS and start sucking CPU and GPU resources[2] at full capacity to perform BitCoin mining tasks.

In other words, while BitCoin mining is a legitimate process, criminals misuse Vghost.exe Miner to infect vulnerable PCs to steal PC's processing power. This drastically affects the performance of the system, which is why cryptocurrency miners should not be ignored. The main symptoms of the Vghost.exe miner:

In general, the short period of BitCoin Miner being installed won't do much harm. However, less experienced PC users might not understand what is happening with their PC and relate all problems to PC's age, congestion of useless apps, and similar issues.

However, since the cryptocurrency bubble seems not to blow up shortly, the distribution of miners is expected to grow. Therefore, people should be more careful when downloading freeware, clicking on ads or visiting doubtful websites.

If you have noticed high CPU usage by Vghost.exe, immediately scan the system with a reputable anti-virus. We recommend using Reimage Reimage Cleaner Intego, SpyHunter 5Combo Cleaner or Malwarebytes. In fact, we would recommend checking resource consumption regularly and scan your PC with anti-malware in case there are a suspicious .exe sucking up CPU.

If Vghost.exe removal os forbidden because the file cannot be found, we will provide a guide on how to get rid of this cyber threat at the end of this article. 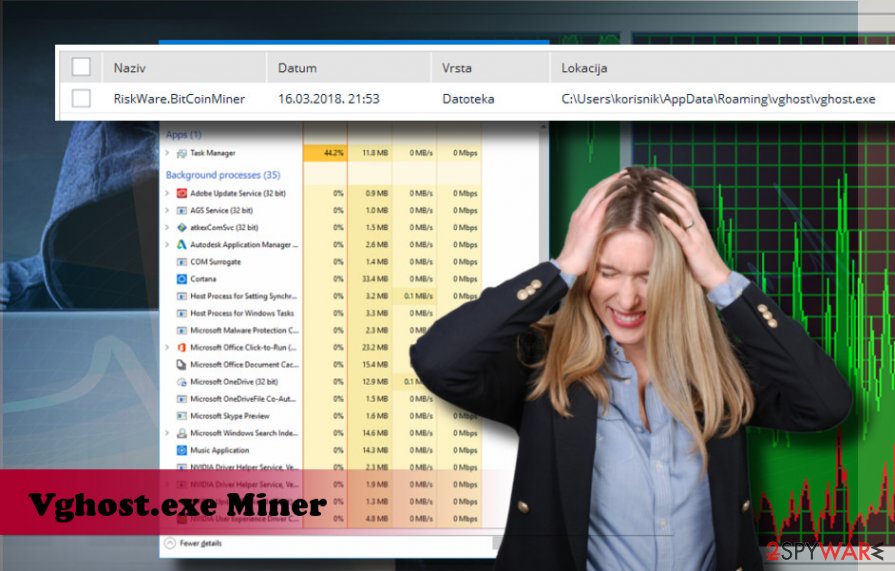 Infiltration of the BitCoin miner malware

BitCoin miner is legitimate. Most of them have official websites and can be downloaded for a particular amount of money or used for free in exchange for a percentage of income. However, this coin miner is being misused by evil-minded people who seek to misuse the CPU resources of inexperienced PC users without their permission. Not only this results in PC's slowdowns but also can lead to complete system's crash due to overheated hardware.

In most of the cases, BitCoin Miners are spreading via an obfuscated version of the freeware or shareware bundle. This way, criminals can easily trick inexperienced users into downloading malicious programs and files.
Also, miners can infiltrate the system via hacked websites. They may contain a JavaScript code, which foists a Trojan immediately.

Besides, miners can be disguised under fake software updates or stand-alone .dll or .exe file installers.
Anyway, having a reputable anti-virus installed is the number one precautionary measure against miner attack. Besides, carefully select what websites to visit and what software to download. The dieviren.de[3] team adds to the subject that it's essential to opt for Advanced or Custom methods when installing freeware.

Vghost.exe removal procedure can hardly be initiated manually. Trojans can be deleted with the help of adapted security software. Therefore, if you want to stop excessive CPU usage and other abnormal PC's behavior, we would recommend you to run a scan with Reimage Reimage Cleaner Intego, SpyHunter 5Combo Cleaner or Malwarebytes security tool.

As soon as you remove Vghost.exe miner, reset your web browser's default settings. According to experts, this miner may also affect web browser or even install related extensions. You can find a tutorial on how to reset each web browser in this article.

In case you cannot launch the antivirus or download a new one, it means that the virus is using a block. To bypass it, follow these steps:

If you could not delete the miner while in Safe Mode with Networking, here's what you should try:

Finally, you should always think about the protection of crypto-ransomwares. In order to protect your computer from Vghost.exe Miner and other ransomwares, use a reputable anti-spyware, such as Reimage Reimage Cleaner Intego, SpyHunter 5Combo Cleaner or Malwarebytes

You can quickly scan the QR code with your mobile device and have Vghost.exe Miner manual removal instructions right in your pocket.