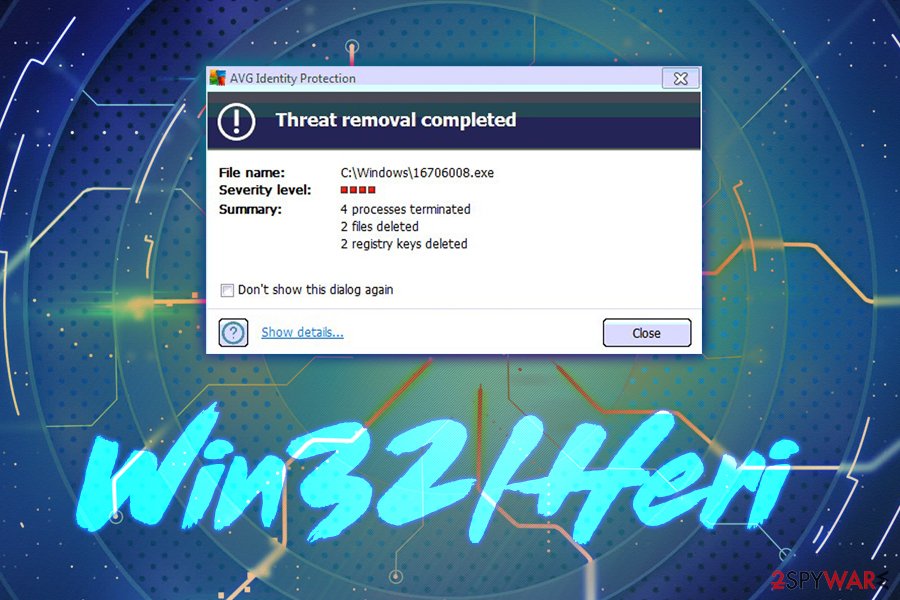 Win32/Heri is a heuristic detection used by AVG anti-malware software. While heuristic detection is an effective way to track never-before examined viruses, flag up and quarantine them, it can often result in false positives. Multiple users complained that certain games or Google Chrome[1] browser was blocked by the AV engine and then Win32/Heri was detected. If you encountered these blocks by your anti-virus software, it is important to perform certain steps before adding the file to the exceptions list, as the Win32/Heri might be associated with such threats like Zbot.

A false positive is when your security software detects a file being malicious, while, in reality, it is useful and desired. In such a case, users could be misled by their AV software, making them believe that their systems are infected with malware. However, if your AVG software flagged Win32/Heri virus, do not instantly assume that it is a false positive.

Even though it is highly unlikely, but Win32/Heri can be associated with malware such as:[2]

Trojans like Win32/Heri usually use deceptive methods to enter the system. Malware can be hidden in malicious or hacked websites, transferred via the backdoor, incorporated into a spam email attachment, or installed as fake updates. Unfortunately, the infiltration of the virus cannot be noticed, unless certain system settings are checked. For example, Zbot copies its executable into %System%\sdra64.exe and adds several registry keys to force the system to execute the malicious script with every system boot.

Trojan horses are one of the most dangerous infections, among ransomware and rootkits. If Win32/Heri virus enters the machine, it can perform various malicious actions, such as download and install additional malware, spawn and shut down processes, access video camera, record keystrokes, and similar. Therefore, It is vital to take care of Win32/Heri removal before sensitive information is stolen.

However, you should not remove Win32/Heri if a legitimate file is detected. For example, some users complained that Battle.net-Setup.exe (official Blizzard application),[3] FantasyGrounds.exe[4] (a virtual tabletop) or even Google Chrome is detected as Win32/Heri. In such a case, you should add the legitimate program as an exclusion.

We suggest you scan your machine with a different anti-malware software (such as ReimageIntego, SpyHunter 5Combo Cleaner or Malwarebytes) to make sure that Win32/Heri is a false positive. 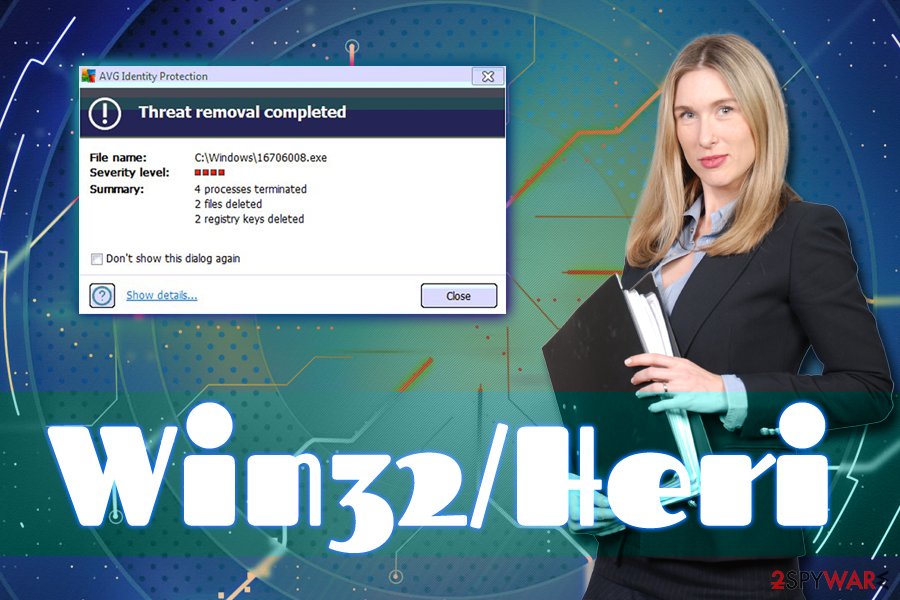 Win32/Heri is a heuristic detection used for previously unknown viruses

Trojan infection can be prevented with comprehensive online security measures

Trojans and worms are sneaky infections that are programmed to do everything to avoid detection. For that reason, many users are not aware for months or even years that their machines are infected. Therefore, it is vital to have reputable security software installed on your computer at all times and make sure it is always up to date (heuristic detection is used for viruses that have not been examined before by the vendor).

To avoid trojans and other malware, experts recommend the following:

Remove Win32/Heri if it is a genuine virus

Before your remove Win32/Heri, you need to make sure it is not a false positive. To do that, you should uninstall AVG antivirus software, enter safe mode with networking and install reputable security program. Update it to the latest version and perform a full system scan. If the AV engine detects any suspicious activity, it will flag it and then assist with Win32/Heri removal.

As we already mentioned, there is a high chance that the Win32/Heri virus detection is a false positive. In such a case, you should add the application or executable that is being detected to exceptions. To do that, follow these steps:

As soon as you do that, false  Win32/Heri notifications should stop.

To remove Win32/Heri and make sure it is not a false positive, enter Safe Mode with Networking the following way:

You can also make use of System Restore to stop the virus:

Finally, you should always think about the protection of crypto-ransomwares. In order to protect your computer from Win32/Heri and other ransomwares, use a reputable anti-spyware, such as ReimageIntego, SpyHunter 5Combo Cleaner or Malwarebytes

Your opinion regarding Win32/Heri Cancel reply

You can quickly scan the QR code with your mobile device and have Win32/Heri manual removal instructions right in your pocket.