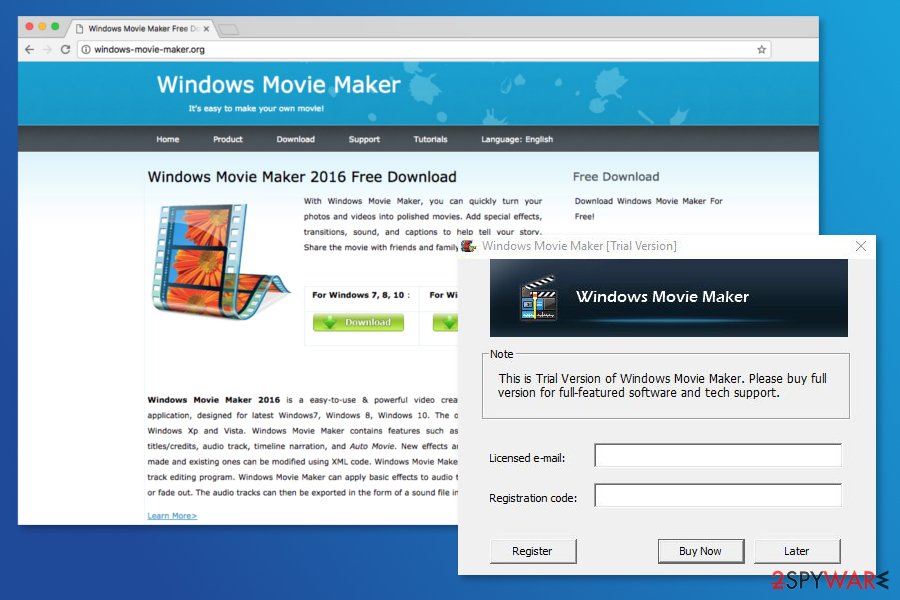 Windows Movie Maker is a legit Microsoft's video editing application that was discontinued in January 2017.[1] However, scammers have been noticed spreading a fake version of the program. Once users install a bogus software, it delivers an alert that it’s a trial version. In order to use the program users have to obtain a license.

Therefore, Windows Movie Maker virus spread as a fake video editing software. It has an official download website windows-movie-maker.org which might appear on the top of the Google search results when users enter “movie maker” keywords. The similarity of the names might trick users into downloading the program themselves.

However, security programs might detect this cyber threat under the Win32/Hoax.MovieMaker name. According to the ESET analysis,[2] Windows Movie Maker scam was the thirst most detected malware worldwide on the 5th of November 2017. The majority of victims were in the Philippines, Israel, Finland,[3] and Denmark.

The purpose of the Windows Movie Maker malware is to convince users into buying the license of the fraudulent video editing program. After the installation, users find out that they have downloaded a free trial of the program. This fact should seem suspicious because the legit version of Windows Movie Maker was always free of charge.

While using a fake version of the program, users receive pop-ups saying:

This feature is unavailable in Trial Version. Please buy full version software to use this feature.

The alert includes “Register,” “Buy Now” and “Later” buttons. Users, who fell for the scam and decided to obtain the license, where redirected to the payment website where people are asked to pay $29.99 for the non-existing version of the program. Scammers know how to motivate users into falling for the scam – they lie about generous 25% discount.

Researchers haven’t detected any malicious components of the program. It seems that cyber-criminals use it only for getting money from unsuspected computer users. However, if you are one of the unlucky ones who suffered from the scam, you should still remove Windows Movie Maker from the PC.

However, if you noticed other suspicious activities after installation of the fake app, such as system slowdowns, an increased amount of ads or security pop-ups, you should opt for the automatic Windows Movie Maker removal. It requires scanning the system with ReimageIntego or another malware removal tool to wipe out potentially dangerous components from the system. 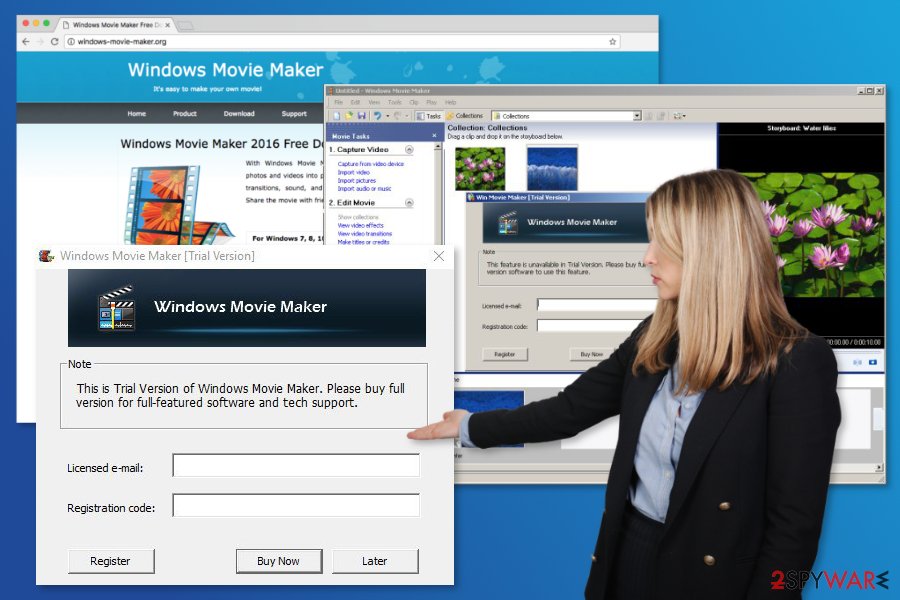 Computer users, who are looking for a free movie making or editing program, might find a hoax software download site among top results in Google search. However, windows-movie-maker.org was reported as a malicious website to the search giant. Though, it hasn’t been removed from Google yet.

Currently, there is any information related to other distribution methods of the Windows Movie Maker scam. However, you should be aware that this program might be available on various file-sharing sites, P2P networks and torrents. Additionally, it might be promoted in freeware packages. Security experts suggest following these tips in order not to fall for the hoax:

Talking about this particular program, the main signs that it’s a hoax is developers. Originally, Windows Movie Maker is developed by Microsoft. However, the fake download site tells that it’s developed by windows-movie-maker.org Software Studio.

If you have installed the fake version of the movie editing program, you should get rid of immediately. You can remove Windows Movie Maker from the Control Panel like any other program:

Additionally, you can opt for the automatic Windows Movie Maker removal. You can obtain a professional and reputable anti-malware and run a full system scan with an updated tool. We recommend for this task using ReimageIntego or Malwarebytes.

You can quickly scan the QR code with your mobile device and have Windows Movie Maker virus manual removal instructions right in your pocket.