XiaoBa is a file-encrypting virus that threatens users since 2017 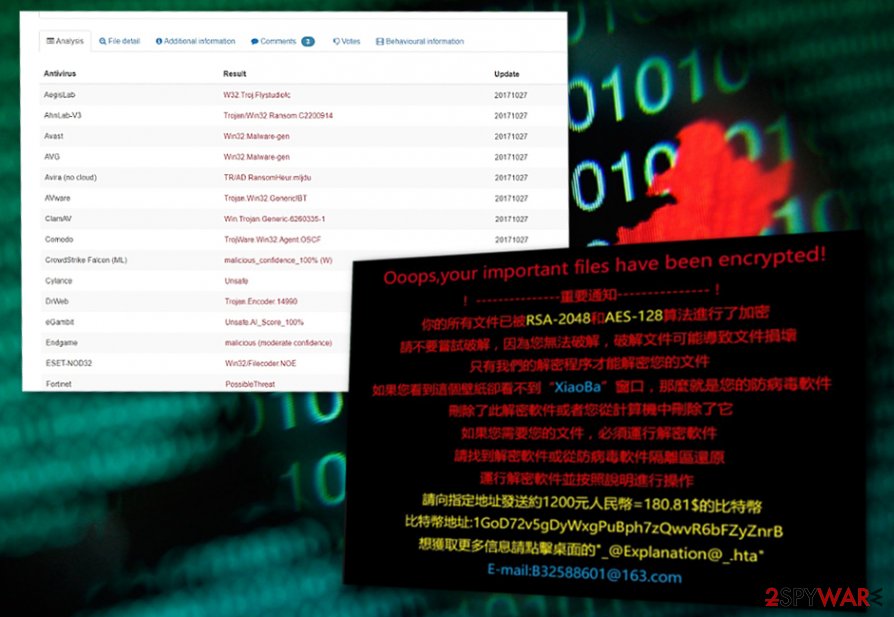 XiaoBa is a file-encrypting virus that started its activity at the end of October 2017. Originally, it aims at Chinese computer users[1] and encodes their files using RSA-2048 and AES-128 cryptography. Encrypted files become unusable due to the appended file extensions – .XiaoBa1 or .XiaoBa34. However, in June 2018, a new variant of the virus has been detected. It seems that developers decided to launch international cyber attacks and aims at English-speaking computer users. The latest version of ransomware locks data with .AdolfHitler file extension.

It seems that XiaoBa virus arrives on the system with the help of malicious spam emails. When users open an obfuscated attachment, malware payload is downloaded and executed on the computer. Following data encryption, ransomware explains how victims can recover their files in two ransom notes – _@XiaoBa@_.bmp and_@Explanation@_.hta (the note greatly resembles the one used by WannaCry ransomware).

The second variant of XiaoBa ransomware came out later that year in November. Because the virus used FlyStudio[2] adware trojan, this version was also dubbed as FlyStudio ransomware. Victims are asked to pay 250 RMB ($37.7) in BTC and contact cybercrooks via B32588601@163.com email. Once inside the system and finished with its file encryption activity, virus displays such ransom note:

Though the virus is not as elaborate as WannaCry virus, it is capable of deleting shadow volume copies.[3] What is more, the virus also disables startup repair functions, which only makes XiaoBa removal more complicated.

Next, at the end of February 2018, cybersecurity experts detected the third variant of XiaoBa ransomware, which appends the .Encrypted[BaYuCheng@yeah.net].XiaBa file extension to encrypted files. It also generates a ransom note named _XiaoBa_Info_.hta, which introduces the ransomware and indicates how much the victim has to pay for XiaoBa decryptor. Besides, this infection plays a voiceover from a VBA file and distinguishes from the others due to extremely high CPU consumption.

Popular security programs can identify XiaoBa virus and eliminate it without any problems.

Besides, the ransomware has also been found to install these three files:

The above-given files are associated with the first XiaoBa malware version, while the executable pdf_20180118.exe has exceptionally been found in the third virus version.

While the original version is oriented to Chinese-speaking users, the third version might also seek for Japanese computer users' money as the picture it generates on the desktop features Japanese characters. 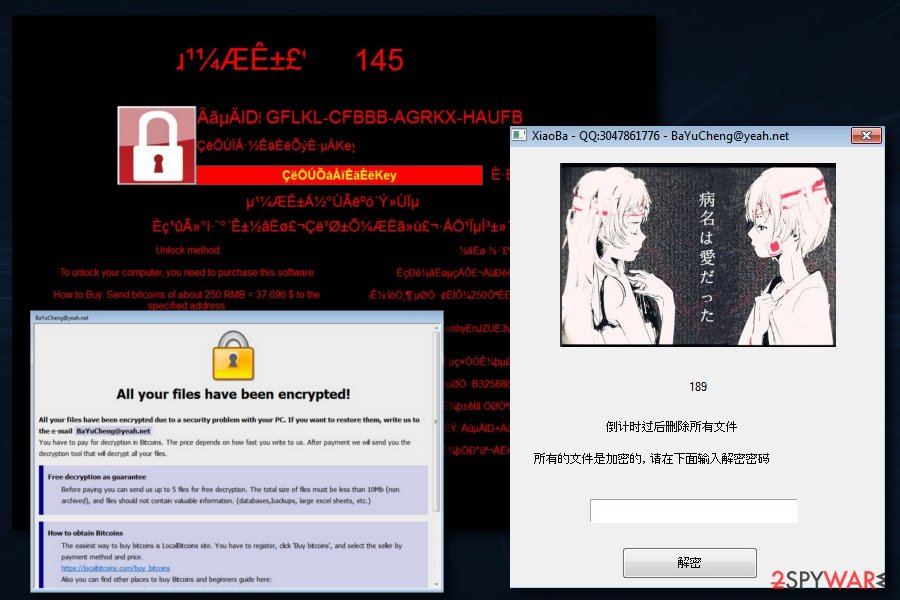 The newest variant was discovered by MalwareHunterTeam[4] in early May 2018; it came back with a new extension – .[BaYuCheng@yeah.net].china. Security experts note that it is the first variation of the virus that uses a country name in the file appendix. The ransom note is very similar to the previous version; however, it is written in Chinese only. It seems to be actively spreading via fake Flash updates.

The fact that it is written in a traditional and not simplified version of Chinese, sparks doubts about the initial target.
In case victims run into technical difficulties, they can contact the perpetrators via B32588601@163.com email address. It is not recommended to remit the payment but remove XiaoBa ransomware instead. Reimage Reimage Cleaner Intego or Malwarebytes might be of use in this situation. Even if the malware deletes shadow volume copies in advance, you can recover the data with the assistance of online backup copies if you have set up them in advance. 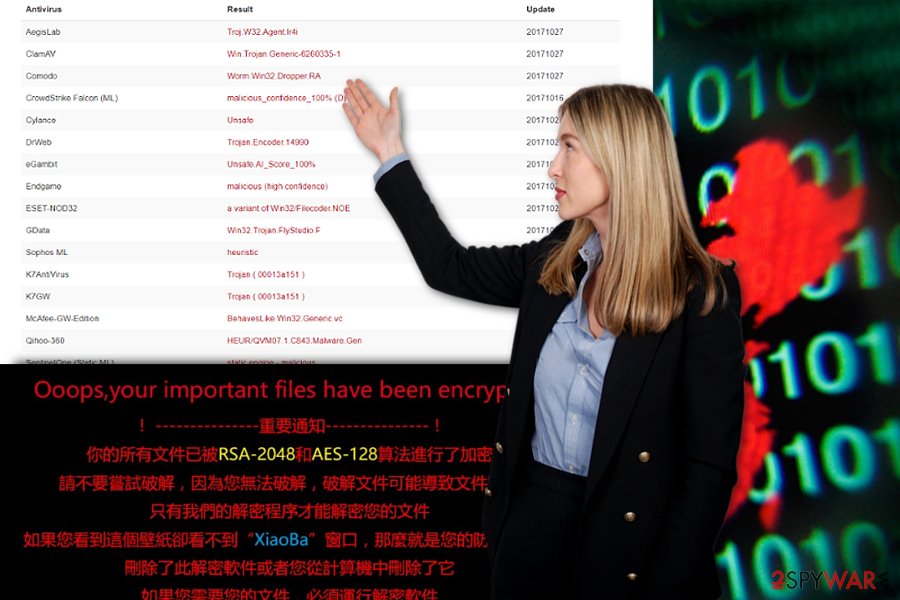 XiaoBa is a file-encrypting malware that usually infiltrates the system after opening malicious spam email attachment. In this way, it can bypass detection and start data encryption.

In June 2018, malware researchers reported that new variant of ransomware emerged. Malware is executed from New Folder.exe file which typically is dropped from the malicious email attachment. Immediately it starts scanning the system and looks for the file to encrypt.

This time creators of malware launched a campaign targeted at English-speaking computer users, and use the name of a German historic figure. During data encryption, it appends .AdolfHitler file extension. After that, it provides data recovery instructions in  # # DECRYPT MY FILE # #.bmp which becomes affected computer's wallpaper. Additionally, it delivers a pop-up window informing about ransomware attack and plays audio in the background. Thus, this cyber attack is loud and cannot be overlooked. 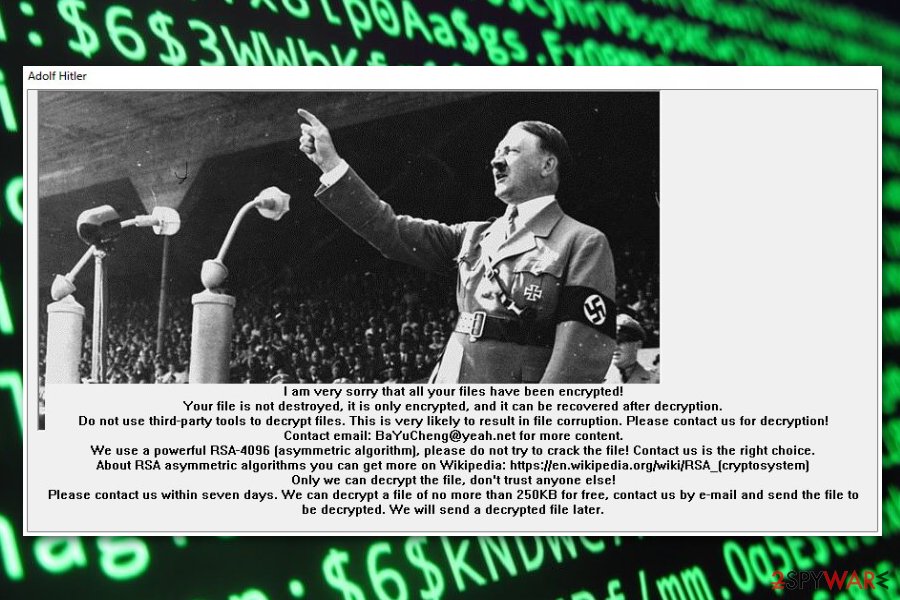 XiaoBa AdolfHitler ransomware is an English variant of the file-encrypting virus.

In the pop-up window, authors of the XiaoBa AdolfHitler ransomware informs that files are encrypted using RSA-4096 encryption and can be decrypted only with a specific software. In order to take this offer, victims have to send an email to BaYuCheng@yeah.net in seven days time. The new background picture also provides the same threatening message:

I am very sorry that all your files have been encrypted!

Your file i snot destroyed, it is only encrypted, and it can be recovered after decryption.

Do not use third-party tools to decrypt files. This is very likely to result in file corruption. Please contact us for decryption!

We use the powerful RSA-4906 asymetric algorithm, please fo not try to crack the file! Contact us the right way.

However, security specialists do not recommend following hackers' instructions. Crooks may not provide the decryption software once they receive the ransom. Hence, instead of risking to lose the money, remove .AdolfHitler file virus from the machine with anti-malware software. 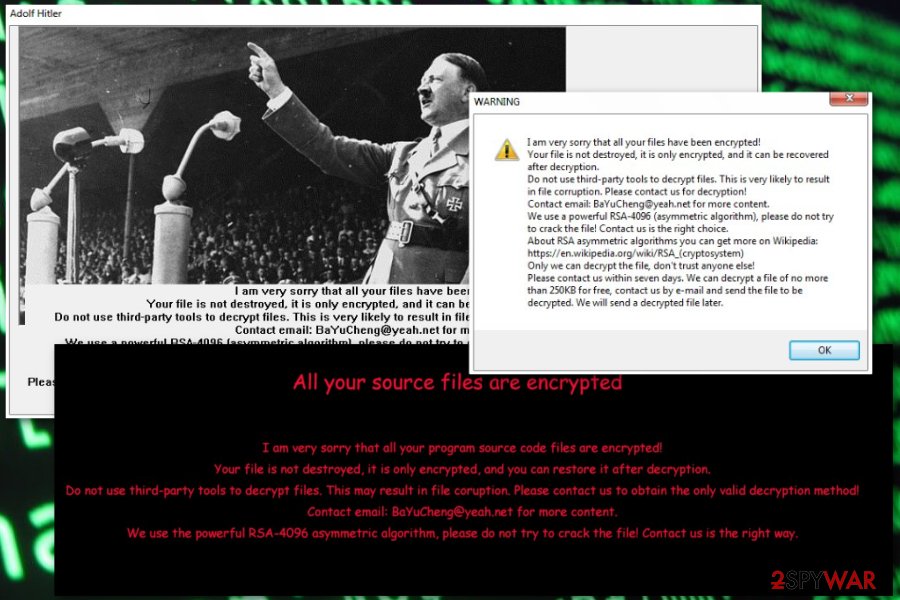 Cyber criminals might use multiple methods to spread ransomware

The malware is likely to be spread via typical means of distribution.[5] You can get infected with ransomware threats via spam emails, trojans, corrupted apps, and extensions. Exploit kits are also known to help distribute certain ransomware, but at the moment, there is no information whether this particular threat uses the services of these hacking tools.

Therefore, it is crucial to pay attention to the received spam folder. Even if the email urges to open a highly important email attachment, verify the sender before extracting the contents. Cyber villains prefer targeting users with invoices, package delivery notices, etc.

In addition, fortify the overall protection of the device with a few different type applications. Do not download content from websites with no HTTPS protocol or crowded with ads. These tips should assist you in warding off XiaoBa hijack in the future.

Make XiaoBa removal your top priority. Since there are no guarantees that you will retrieve the data, it is necessary to eliminate the virus entirely. Since the crypto-virus meddles with the system files, it is not surprising if you may not succeed in eliminating at first attempt.

Reboot the computer in Safe Mode and launch the security tool. It should remove XiaoBa virus within a couple of minutes. If you are not sure what program to use, we suggest using Reimage Reimage Cleaner Intego or Malwarebytes. If you did not make online backup copies in advance, you might need to wait for the free decryption tool to be released.

Enter advanced setup settings and perform System Restore, if Safe Mode does not grant you access to the computer. After that, you should be able to run the security tool and remove XiaoBa virus.

Guide which is presented above is supposed to help you remove XiaoBa from your computer. To recover your encrypted files, we recommend using a detailed guide prepared by 2-spyware.com security experts.

If your files are encrypted by XiaoBa, you can use several methods to restore them:

This tool is designed to help users recover files after an unexpected system crash. On the other hand, it might be a practical tool in the case of XiaoBa hijack.

Use ShadowExplorer if ransomware did not delete Shadow Volume Copies

If ransomware failed to delete shadow copies of the encrypted data, download this tool and start data recovery.

XiaoBa decryptor is not available yet.

Finally, you should always think about the protection of crypto-ransomwares. In order to protect your computer from XiaoBa and other ransomwares, use a reputable anti-spyware, such as Reimage Reimage Cleaner Intego, SpyHunter 5Combo Cleaner or Malwarebytes

You can quickly scan the QR code with your mobile device and have XiaoBa ransomware virus manual removal instructions right in your pocket.