xmr-stak.exe is the trojan responsible for extracting Monero and other cryptocurrency running on the CPU of your PC

xmr-stak.exe is the threat that creates issues with the system because it causes changes and damages some crucial parts of the computer. This is the file related to the Nicehash and other similar programs used for the users' profit.[1] However, it is a known and commonly reported issue regarding malicious purposes and suspicious activities related to the particular executable file. The Task Manager is a place where people notice the background process that triggers high usage of CPU and other resources of the device. It even gets relaunched and is persistent, so even when people try to remove it they get to experience the same intrusive activities again and again. There might be an issue with some settings or preferences, processes that creates annoying loops.

Unfortunately, the xmr-stak.exe virus still can be the serious Trojan designed to run on those resources and generate cryptocurrency for the malicious actor, not the user. The file itself can be located in the folder belonging to the Hasher or different cryptography[2] program. But there are many reports from users and even researchers that the source code, particular files, and other contents related to this executable have malware.

xmr-stak.exe can affect the machine significantly and cause damage to your device, software, or affect the state of security. You can sometimes notice particular issues and symptoms that indicate the infection, so pay attention to details like:

There are no particular symptoms that could indicate the xmr-stak.exe virus infection, but you need to be cautious of the possibilities to get such malware installed and be suspicious about all the programs and files that occur out of nowhere. A long time on the machine can open many doors for the threat, so the longer it manages to run on the computer, the more issues it can create.

This is why many experts, malware researchers advise removing the threat as soon as it is possible. You may have a difficult time while trying to remove xmr-stak.exe because of the changes already made in the functioning of the machine. This is why you can run the machine in Safe Mode with Networking first. Then launch the AV tool. 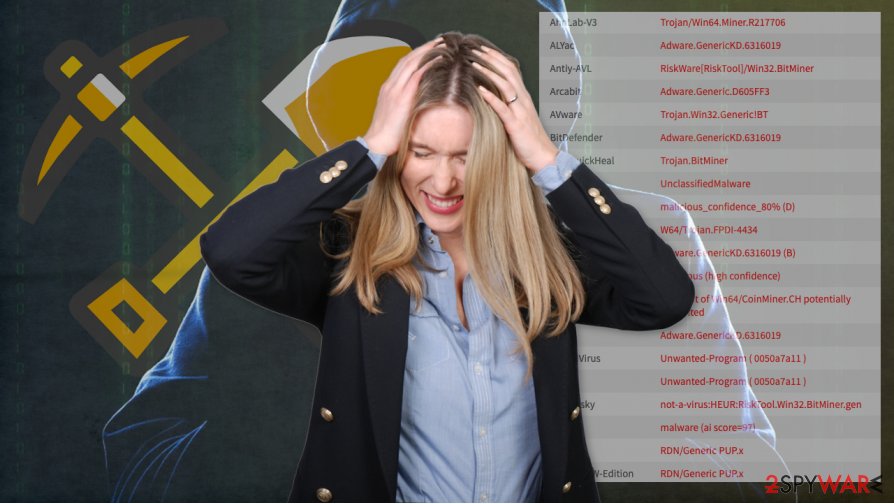 xmr-stak.exe is the file that can be related to cryptocurrency miner or even a trojan that collects such profits for malicious actor instead. When there are many functions that can be possibly designed to run via an xmr-stak.exe trojan, you as a victim of such a virus should react as soon as possible. The best way to remove the threat that infiltrates devices behind the user's back – anti-malware tools. SpyHunter 5Combo Cleaner or Malwarebytes can work perfectly for the particular diagnosis too.

This is the particular type of program that can determine if your device is affected by a trojan, and do you really need options for the xmr-stak.exe removal. However, scans using anti-malware or a security tool can help clear other intruders that trigger issues with your machine, so do not hesitate. Also, remain aware of the possible damage and affected system functions or files and run ReimageIntego for the general virus damage check.

Malicious files can land on the machine without your notice

It is possible to get such specific malware when you visit compromised sites and do not pay attention to particular issues like file attachments on the emails. The virus itself and all the symptoms may vanish when the particular goal is achieved. So nor the infiltration nor the infection itself is noticed or avoided.

The best way to keep the machine free of infections is to pay attention to details that can trigger problems with important parts and functions. You need to have the AV tool or security program running more often, so the software can indicate issues and possible intruders for you.

Make sure to determine the state of the security and get rid of the xmr-stak.exe virus if needed

It most cases, when this file and other associated data got reported as dangerous or potentially malicious, people questioned if the file itself os the one related to malware. To determine if you need to remove xmr-stak.exe or not – run the anti-malware program like SpyHunter 5Combo Cleaner or Malwarebytes and pay attention to the detection results.

When the application finds this file, or other programs malicious and dangerous, you can run the same program and allow it to clear all the intruders or dangerous applications. After the full xmr-stak.exe removal, you should also go through settings and system function alterations. ReimageIntego can do that for you automatically.

Try to reboot the machine in Safe Mode with Networking, so you can run the AV tool and properly check the system for malware

System Restore feature can also help with such issues as cyber infections. So you can remove xmr-stak.exe by recovering the PC in a previous state

Finally, you should always think about the protection of crypto-ransomwares. In order to protect your computer from xmr-stak.exe and other ransomwares, use a reputable anti-spyware, such as ReimageIntego, SpyHunter 5Combo Cleaner or Malwarebytes

Your opinion regarding xmr-stak.exe Cancel reply

You can quickly scan the QR code with your mobile device and have xmr-stak.exe manual removal instructions right in your pocket.