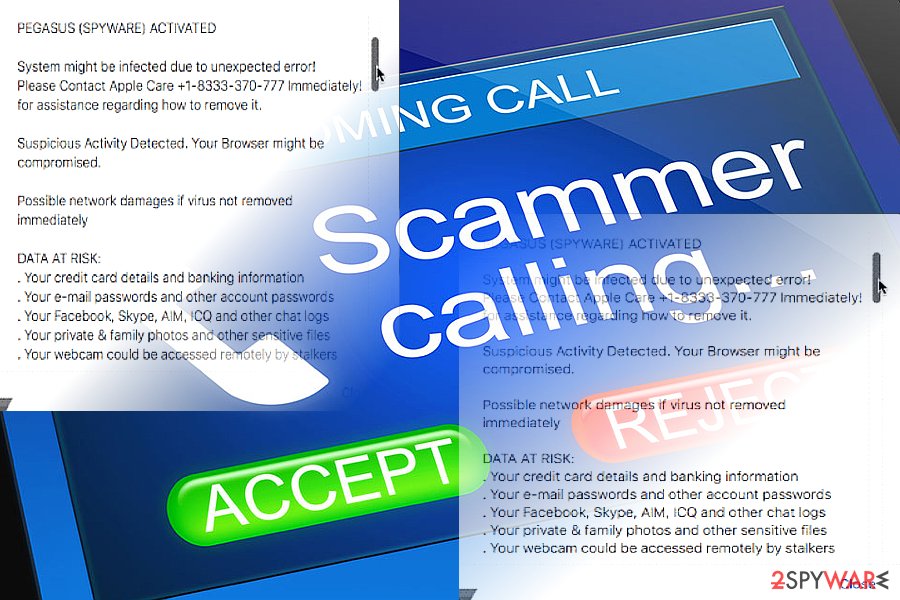 “Your Apple Device Has a Virus” virus spreads as a tech support scam targeting Mac and iOS community. This browser-based scam frightens users with Pegasus spyware. In order to save the data from theft, the message urges users to call +1-8333-370-777. Here is an extract from the message:

*YOUR APPLE DEVICE HAS A VIRUS*

System might be infected due to unexpected error!
Please Contact Apple Care +1-8333-370-777 Immediately!
for assistance regarding how to remove it.

According to the message, the following data is under risk:

“Your Apple Device Has a Virus” tech support scam: fake or genuine?

The scam developers indeed did a good job. They tied in legitimate information which might persuade Apple and iPhone users that indeed their computers might have been corrupted. They mention two things: Pegasus spyware and Apple Care, which is the genuine Apple support center.

But first things first, let us assure that this notification is fake. Whether you see such notification on Windows or Mac, note that such alerts do not pop up in random pages. Secondly, genuine notifications do not include a phone number.

Thus, what you have to do is exit the page or force shut down via Activity Monitor. However, it is recommended to remove “Your Apple Device Has a Virus” scam elements by clearing the browsing data or scanning the system with the Mac version of Malwarebytes. 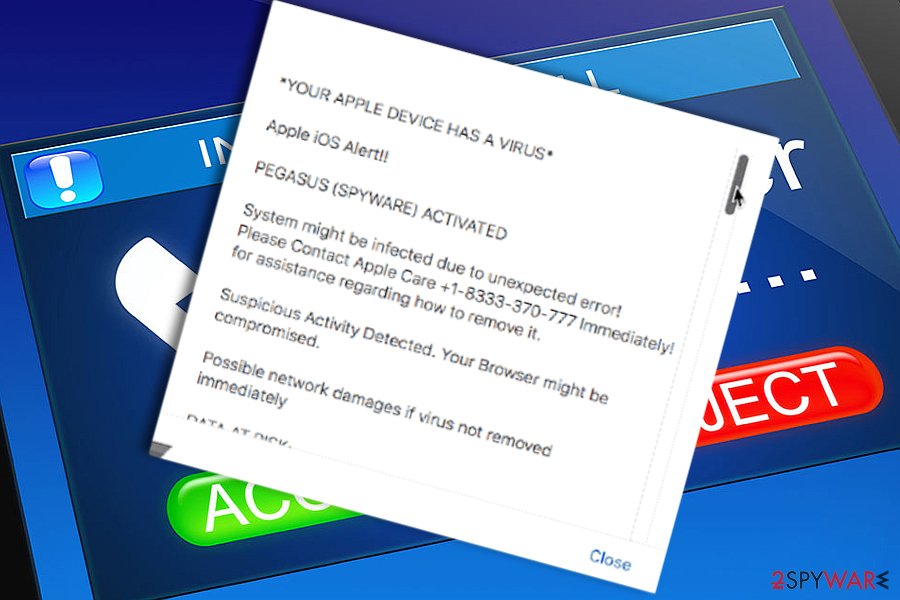 The image displaying “Your Apple Device Has a Virus" pop-up alert. It attempts to persuade users that their devices have been compromised with Pegasus spyware.

What is this Pegasus spyware?

If you have been familiar with Pegasus spyware, you might indeed get paranoid about the security of your Apple device.
As a matter of fact, Pegasus malware, which feeds on three zero-day vulnerabilities, was devised specifically for MacOS and iOS, though it has its Android counterpart as well[1].

In 2016, United Arab Emirates citizen Ahmed Mansoor discovered an exquisite malware campaign targeting iOS. He got a couple of SMS messages with shady links.[2] They were the harbingers of the main malware payload.

Clicking on the link would download Pegasus malware which would, later on, download remaining necessary files which would allow the malware to fully monitor’s users private messages. Keylogging features enable the malware to read encrypted content as well.

Another problem is that Pegasus enables to hide its tracks professionally. It is able to self-destruct if it is deprived of connection to Command and Control server within 60 days. Interestingly, the malware only targets specific users as it was designed by an Israeli company to belong to NSO group.

If you are wondering whether you have been infected with Pegasus via “Your Apple Device Has a Virus” scam, let us assure that there is no relation between these two. As discussed below, only selected users have been affected by the original malware.

You only need to cancel the window to exit the web page. If you cannot do so, close the browser via the Activity Monitor. Let us move on “Your Apple Device Has a Virus” scam removal methods.

If you noticed these alerts on iPhone, all you can do is exit the page, as IOS does not support security applications.
Though Apple products are hostile towards security utilities, in fact, you can install certain malware elimination tools on MacOS. Above-mentioned sample functions on the Mac as well. Thus, it will help you remove “Your Apple Device Has a Virus” web scripts.

Alternatively, below you will find guidelines which instruct how to eliminate the scripts on major browsers. If you use other than Safari browser, you will find them useful. Resetting the browser contributes to “Your Apple Device Has a Virus” removal as well.

On the final note, a widely-spread opinion that MacOS is fully immune to malware might turn out to be perilous as felons find ways to penetrate even most unbreakable systems. Other than English, Russian, French, Turkish[3] users should be vigilant of the scam.

To remove “YOUR APPLE DEVICE HAS A VIRUS” virus, follow these steps:

Do not get alarmed by “Your Apple Device Has a Virus” alerts. Close the web page. If you have security tool, scan the browser.

Uninstall “YOUR APPLE DEVICE HAS A VIRUS” from Internet Explorer (IE)

Eliminate “YOUR APPLE DEVICE HAS A VIRUS” virus from Microsoft Edge

Once these steps are finished, “YOUR APPLE DEVICE HAS A VIRUS” should be removed from your Microsoft Edge browser.

Delete “YOUR APPLE DEVICE HAS A VIRUS” from Mozilla Firefox (FF)

Erase “YOUR APPLE DEVICE HAS A VIRUS” from Safari

Jak usunąć “Your Apple Device Has a Virus"

You can quickly scan the QR code with your mobile device and have “YOUR APPLE DEVICE HAS A VIRUS” virus manual removal instructions right in your pocket.