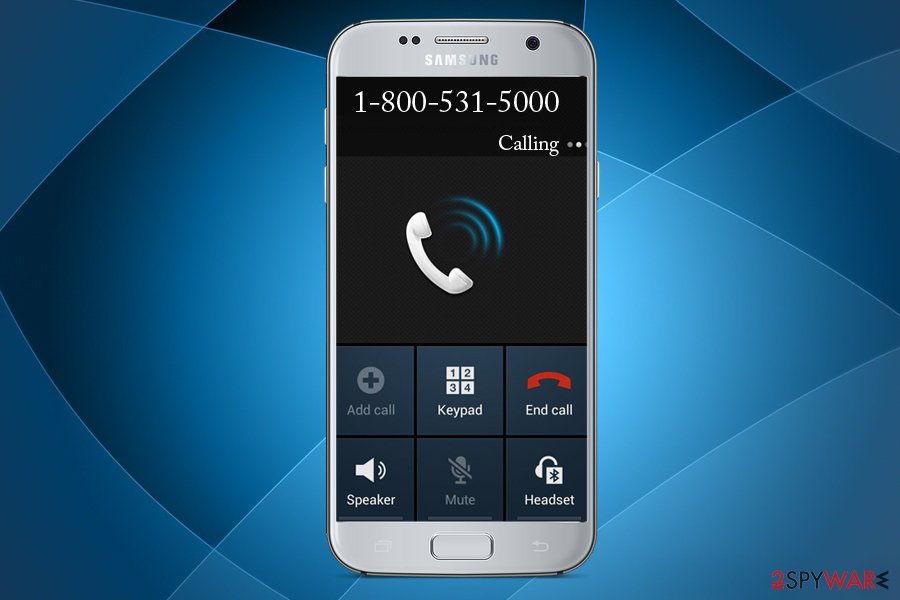 8005315000 is a scam call number that usually comes from a person with a heavy Indian accent. Allegedly, the person on the phone claims that the user is eligible for a great deal from a well-known American broadcast satellite service DirectTV. According to users' reports, they were offered a low-cost service for the internet and the TV cable for such prices as $89.99, $62.50, and similar. Typically, criminals calling from 8005315000 then ask users to provide their credit card details or purchase Amazon Gift Card to pay for the deal. Additionally, people claimed that they heard background noises when speaking to fraudsters, which concludes that the 1-800-531-5000 scam calls are coming from the Indian call center. Fortunately, such organizations are being tackled by Microsoft, the FBI, and other authorities, as practice shows.[1]

Perpetrators often use the names of famous companies in order to gain access to user's personal information or for money extortion purposes. Regardless of the reason, scamming schemes like 1-800-531-5000 call should be stopped to prevent harm to innocent users. Unfortunately, law enforcement cannot do much, as phone numbers can be registered relatively easily, and there are simply way too much of such activity going on.

Unfortunately, that means bad news for the end users. While most users are not that gullible and would figure out the 1-800-531-5000 scam, there will always be those who will fall for the trick. This might cost a large sum of money or even identity theft; however, those behind the malicious plot only seek cash.

Furthermore, unsolicited calls from 8005315000 or any other scam number can result in a high telephone fee, as the number might be registered to be charged at premium rates. Therefore, merely answering the call can empty your pockets!

Finally, crooks might ask you to provide remote access to your device. They might steal personal data, files or oven install malware that would track every keystroke[2] on your computer. If you suspect that your computer might be infected, scan your system with Reimage Reimage Cleaner Intego, SpyHunter 5Combo Cleaner or other reputable security software that can locate malicious components and eliminate them. 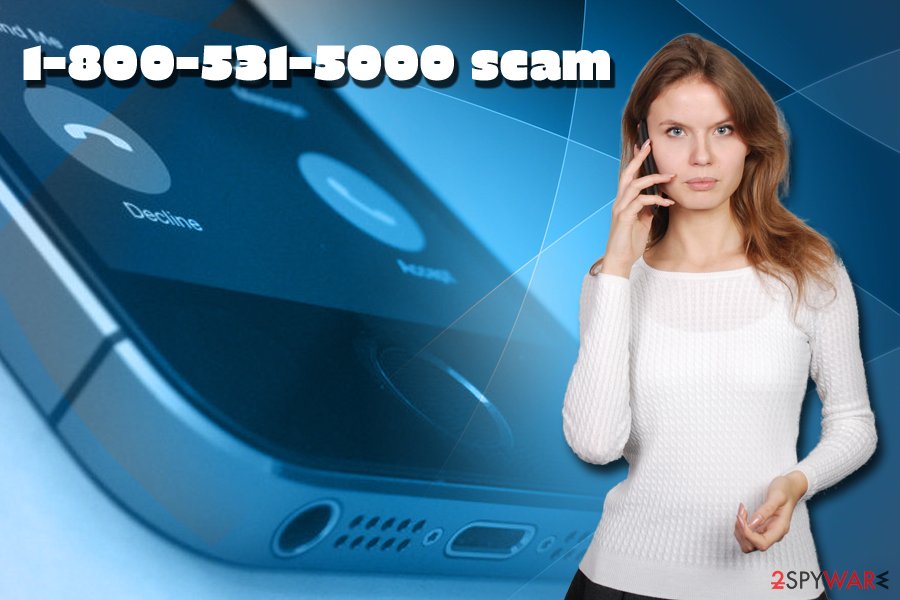 Be cautious to avoid getting scammed by Indian scam call centers

Indian scam call centers is a lucrative business,[3] and thousands of people are employed and trained to make sure the maximum profit can be gained. Unfortunately, such activity is highly illegal and results in millions of dollars in damages not only to regular users but also to small businesses and other organizations.

Therefore, it is vital to stay vigilant when getting calls from unknown numbers. You should be aware that every relatively-known name of a company, organization or service can be used in order to scam people. Simply remember, that people you cannot see directly can pretend to be whoever they want, and you need to make sure you do not fall for the lie.

Ask the caller for the specific details that only the company representative would know (for example, your customer ID, your full name, or any other information). NEVER provide payment details over the phone to somebody who called you, unless you contacted the firm by using legitimate number yourself.

And remember, everything that seems too good to be true, most likely is.

Stop 8005315000 spam calls and never engage in conversations with scammers

According to reports, the number +1-800-531-5000 might be actually connected to real DirectTV support. Criminals can mask the fake number with the real one so that it would seem that the call is coming from a legitimate source. Thus, while it is possible to merely block calls from via your phone, the best option would be to use specific software that would stop scam calls in the first place.

There are several applications that are designed to stop 8005315000 and similar scam calls. There are multiple different apps available, such as Hiya, TrueCaller, RoboKiller, Mr. Number, and many others. Simple visit Google Play or App store to download and install them (most of them are free, although paid versions provide more protection and improved functionality).

You can quickly scan the QR code with your mobile device and have 8005315000 manual removal instructions right in your pocket.