Adylkuzz is a stealthy Monero cryptocurrency miner [1] which was discovered shortly after the media broke out the news about the cyber world being targeted by numerous WannaCry ransomware attacks. It soon turned out that this malware also carries out its attacks by leveraging the very same EternalBlue exploit and DoublePulsar backdoor as WannaCry, but more on that later. What the security experts at Proofpoint and Bitdefender found out after a closer analysis was even more striking: the malicious miner has been spreading throughout the web way before the infamous ransomware. This could suggest that this stealthy threat could be the work of the same hacking group The Shadow Brokers, who have leaked the EternalBlue and DoublePulsar tools [2] from NSA’s secret databases. Nevertheless, while the creators of this tool remain undisclosed, so we don’t want to make any untimely presumptions. In the meantime, it is more useful to focus on the things that we already know about this virus and learn how to avoid or remove Adylkuzz from the infected computers. 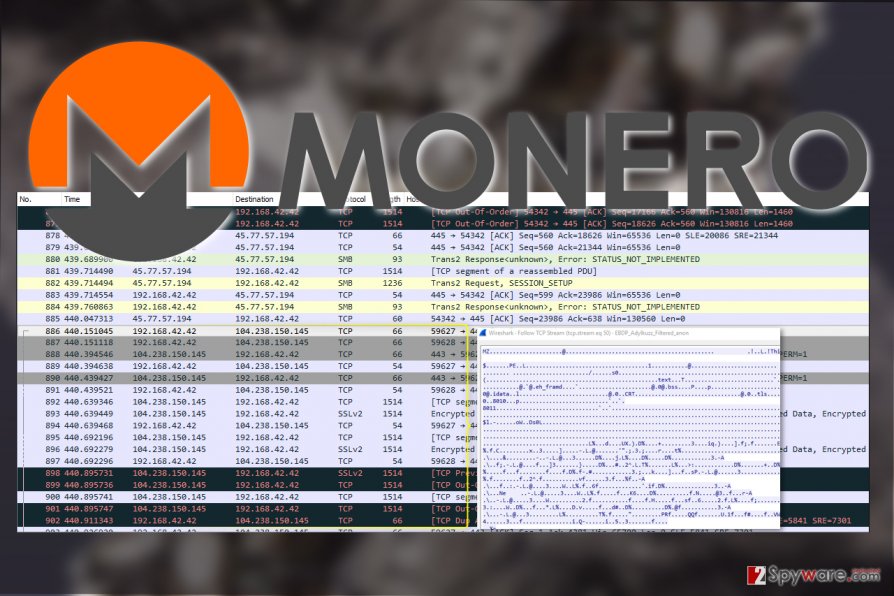 Unlike most mining software Adylkuzz is focused on mining Monero cryptocurrency instead of the usual Bitcoins. Monero is more anonymous than Bitcoin, and this is probably the main factor explaining the hackers’ choice. Though these currencies are different, their mining processes are more or less the same. Once the miner is on the computer, it connects the infected device to the large mining botnet and exploits its computing resources to generate crypto-money. While one PC generates just a few dollars, the entire network of computers can generate thousands. The worst part is that miners are true masters of disguise. They may run on the computer undetected for a long time, draining its resources bit-by-bit. Typically, devices infected with miners will demonstrate sluggish behavior and high CPU usage so if you notice these symptoms, make sure you get your system checked out. We recommend scanning the device with some professional and versatile security software, such as Reimage Reimage Cleaner Intego which will detect the threat and complete Adylkuzz removal automatically. 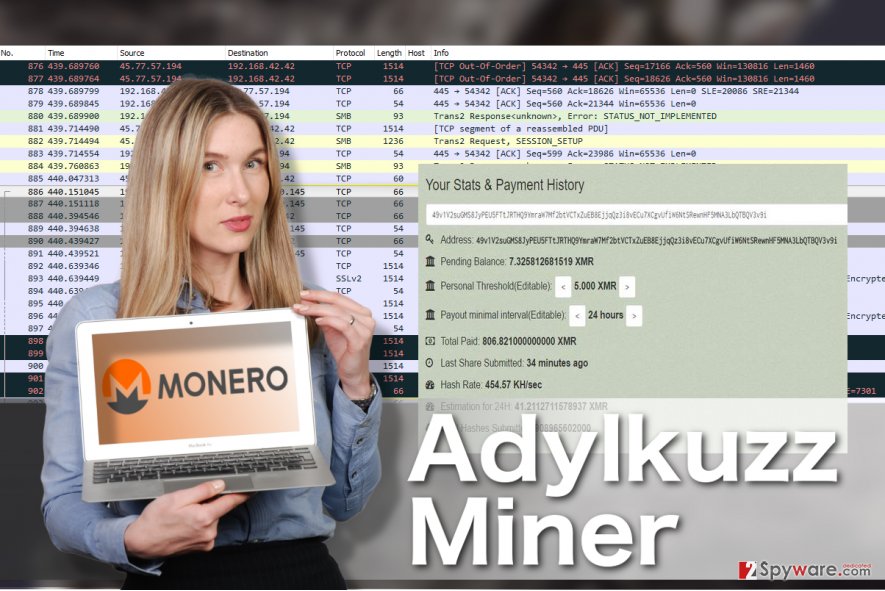 Adylkuzz Miner infiltrates the systems the same way the infamous WannaCry ransomware does and uses computer resources to mine cryptocurrency.

MS17-010 is that one nasty Microsoft Windows vulnerability which allowed Adylkuzz and WannaCrypt to compromise a huge number of computers across the globe. This security gap allows hackers to employ Microsoft Server Message Block (SMB) service and detect exposed PCs on a particular network. Then, they will use EternalBlue exploit to infiltrate the system and download DoublePulsar backdoor on it. Finally, the Adylkuzz miner will be sneaked into the system and start bringing illegal profit to its creators.

Remove Adylkuzz from your PC and recover your system

Crypto-miner infections hit hard when it comes to smooth system performance. They slow down the computer and triggers unnecessary errors. Adylkuzz removal can stop all this, of course, but it is not that easy to execute. The virus will target antivirus functionalities and block the security programs from detecting it. Thus, you might have to employ your own skills in order to remove Adylkuzz virus properly. In particular, you will have run your PC in Safe Mode which will disable some of the virus processes, making it easier to detect. We have prepared concise and comprehensive instructions how to enable Safe Mode below the article.

As we have mentioned, even the most sophisticated antivirus utilities may encounter problems when removing Adylkuzz miner virus. To make this process easier, we recommend enabling the Safe Mode and scanning your PC again.

Check out another malware decontamination technique below:

Guide which is presented above is supposed to help you remove Adylkuzz Miner from your computer. To recover your encrypted files, we recommend using a detailed guide prepared by 2-spyware.com security experts.

If your files are encrypted by Adylkuzz Miner, you can use several methods to restore them:

Finally, you should always think about the protection of crypto-ransomwares. In order to protect your computer from Adylkuzz Miner and other ransomwares, use a reputable anti-spyware, such as Reimage Reimage Cleaner Intego, SpyHunter 5Combo Cleaner or Malwarebytes

You can quickly scan the QR code with your mobile device and have Adylkuzz Miner virus manual removal instructions right in your pocket.