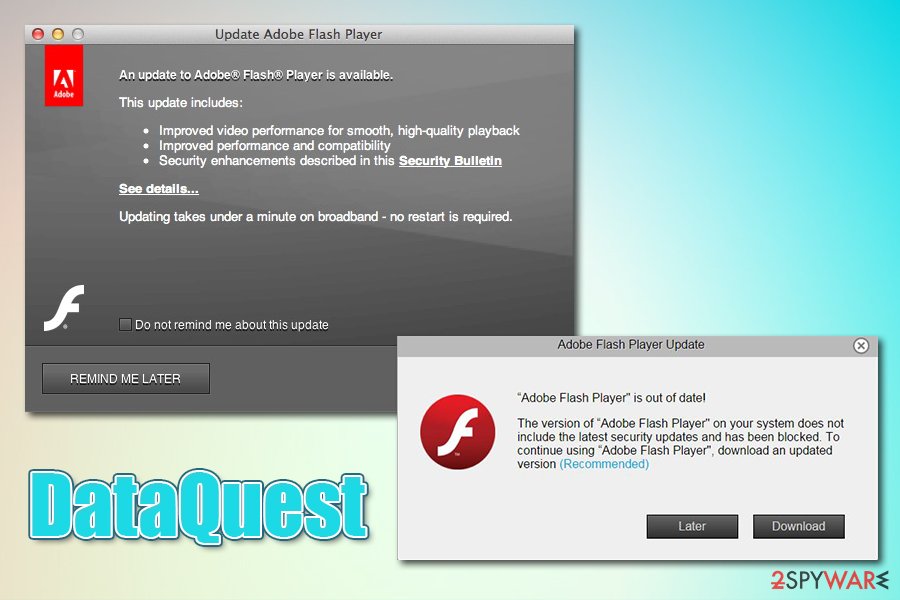 DataQuest is malware that delivers other unwanted software behind users' backs

DataQuest is an adware that reaches macOS users after they get trick to install fake Flash Player updates or during the installation of unsafe applications from third-party sites. The app belongs to belongs to the prominent Adload campaign – an interconnected network of malicious apps that abuse a built-in AppleScript to deliver additional malicious payloads without user notification. As a result, victims' computers become more infected over time, and only proper computer cleaning can stop the background activities of the DataQuest virus.

Due to the stealthy activity of DataQuest and other applications that might have been inserted without permission, users might not notice the infection immediately. Nevertheless, some of the symptoms may be visible right away, such as modified web browser settings of Safari, Google Chrome, and Mozilla Firefox. As a result, users can face redirects to various scam sites, pop-up notifications from the macOS like “Utility will damage your computer,” increased amount of ads on all websites, a slowdown of the machine, suspicious extensions installed without permission, etc.

Security researchers note that adware has been a growing threat to Mac users. According to experts' reports, Mac malware is now outpacing Windows infection rate,[2], and one of the major portions of the infections belongs to adware. While DataQuest can be considered as ad-supported software, its distribution and operation methods are much closer to those of malware.

The principle of DataQuest virus activity is very primitive – it is concentrating on delivering users ads, such as pop-ups, deals, offers, banners, in-text links, coupons, and other commercial content. While in some cases, these ads might be marked by an app or a service it is being delivered from, it is highly unlikely to see “Ads by DataQuest” or “Powered by DataQuest” or similar indicators.

When DataQuest is trying to display ads, it will attempt to connect to unknown domains in the background. This way, the pop-ups, and other ads can be called up when users are browsing the web. This activity may considerably slow down the web browser, and some websites may fail to load entirely. If the slowdowns continue after DataQuest removal, are probably low on space due to funk files – you can get rid of those with tools like Reimage Reimage Cleaner Intego.

Although the symptoms of DataQuest infection vary, you may see the following signs of the infection:

Besides these relatively obvious symptoms, there is a lot that the DataQuest adware can do in the background. One of the main activities that should be concerning is data gathering. Considering that the malware gains elevated permissions on the system, some of the browser extensions might be set to gather all the information you type into your web browser. Besides, adware also usually collects non-personally identifiable information as well, including the IP address, ISP, links clicked, sites visited, search queries, technical details, installed apps, etc. 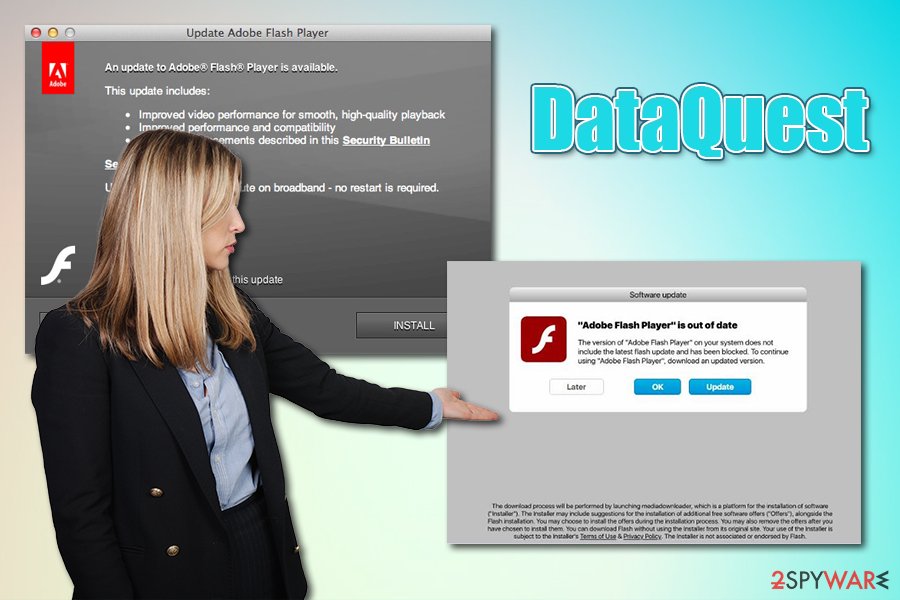 You should remove DataQuest from your machine as soon as possible, as its deceptive operation might lead to multiple severe consequences, including monetary loss, privacy issues, or even identity fraud. Keep in mind that the app might also be a sign that other threats are already present on the machine, including the notorious Shlayer Trojan.

For many years, Mac power users and even IT experts claimed that Mac malware does not exist, and there is no need to employ any third-party security tools in order to protect it. According to them, the built-in defenses like GateKeeper and XProtect are more than enough – and they would be correct several years ago. Most of Mac malware nowadays utilize various techniques to bypass these defenses, such as using fake digital signatures that would circumvent GateKeeper's functionality. Additionally, users can always grant permission for malicious files to make changes to the system once they are tricked by a sophisticated phishing alert online.

Thus, it is important to know how Mac malware spreads in order to avoid it in the future. Two main methods are used by cybercriminals: 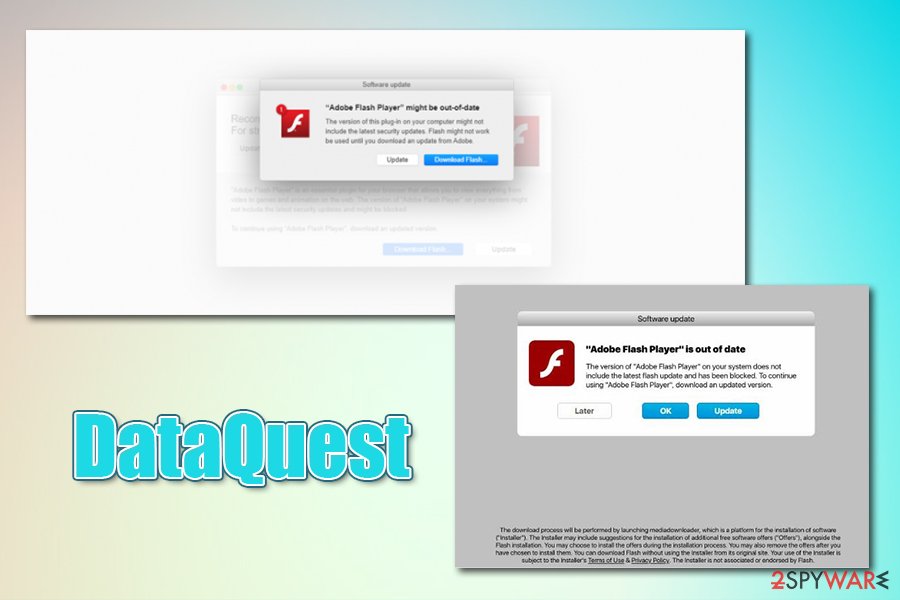 In most cases, users get infected with DataQuest malware after they get tricked by fake Flash Player update

Get rid of DataQuest malware

To remove the DataQuest virus from your machine, taking it to Trash will most likely not suffice. In some cases, you might not even find the app inside the Applications folder at all, as it can be functioning with the help of other persistence techniques. Some malicious files that are dropped on Mac can continue the unwanted activities even after the main app is terminated. Therefore, to get rid of the adware manually, you should also check the following locations for suspicious .plist and other files:

If you do not want to tamper with files inside your computer, you can perform automatic DataQuest removal with the help of security software. Simply download reputable anti-malware on your system and perform a full system scan – this will also eliminate all the underlying threats you might not be aware of. Finally, reset all the installed web browsers in order to eliminate unwanted browser extensions or settings.

Get rid of DataQuest malware by following these steps:

If you found unwanted browser extensions on Safari that you cannot get rid of – reset the browser:

Your opinion regarding DataQuest Cancel reply

You can quickly scan the QR code with your mobile device and have DataQuest manual removal instructions right in your pocket.