HackTool:Win32/Patcher is the heuristic name used for malware that has a purpose of patching programs to make them malicious 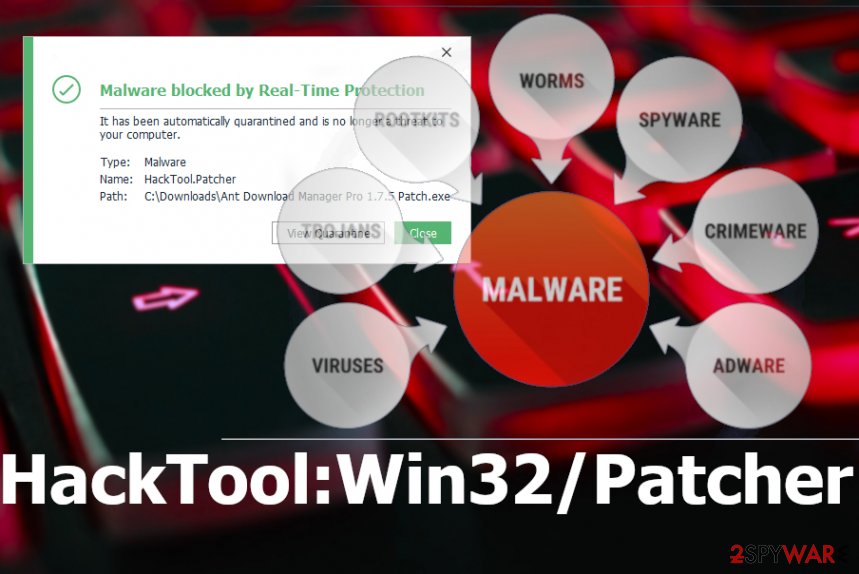 HackTool:Win32/Patcher is the malicious programs detection name that states about a particular virus which can create pirated versions of applications. This malware is designed to create not legitimate versions of known software or alter the once safe program into a malicious application. HackTool.Patcher is the type of a particular cyber threat that can often be downloaded from sites of a questionable nature.[1]

This name can indicate various malware from worms, trojans or spyware, HackTool:Win32/Patcher virus is the general malware that was detected on the machine. Your machine can also be infected with W32/PEPatcher, Troj/Bdoor-AZC, and Virus.Win32.Oliga at the time when the AV or Windows Defender shows you this heuristic name. All of these are creations of cybercriminals and need to be deleted as soon as possible.

These hacking tools are malicious and dangerous because threats like HackTool:Win32/Patcher can become a part of the serious malware campaign and hacker attack. Malicious actors use this type of malware to install other malware on the machine or access particular information, steal credentials.

HackTool:Win32/Patcher can be set to:

When HackTool:Win32/Patcher gets on the system it can run in the background and cause all the needed damage, so once you get the detection alert, you need to focus on virus removal. It is not known how long this malware spent on the machine and how much damage it caused already.

Experts[3] note that HackTool:Win32/Patcher is not a Remote Access Tool that may be legitimate and somewhat safe. This is a threat used to access valuable information about the victim and steal other important details or files from the machine.

HackTool:Win32/Patcher is especially dangerous because the malware that can access valuable users' information may lead to more damage later on than it makes to the infected machine itself. If the virus is set to steal information or banking credentials it doesn't focus on damaging the system.

Nevertheless, you can remove HackTool:Win32/Patcher from the machine and possibly fix virus damage. In the meantime, privacy issues and identity theft are bigger problems that you cannot fight with any software. Fortunately, if you react as soon as possible the threat cannot have enough time to steal your private information.

When such malware infects the machine, you can notice slowness of the device or occasional crashes and freezes of the system due to additional processes malware runs on the device. HackTool:Win32/Patcher install other programs and files to ensure the persistence and alters Windows Registry keys to make every PC reboot launch its processes automatically. 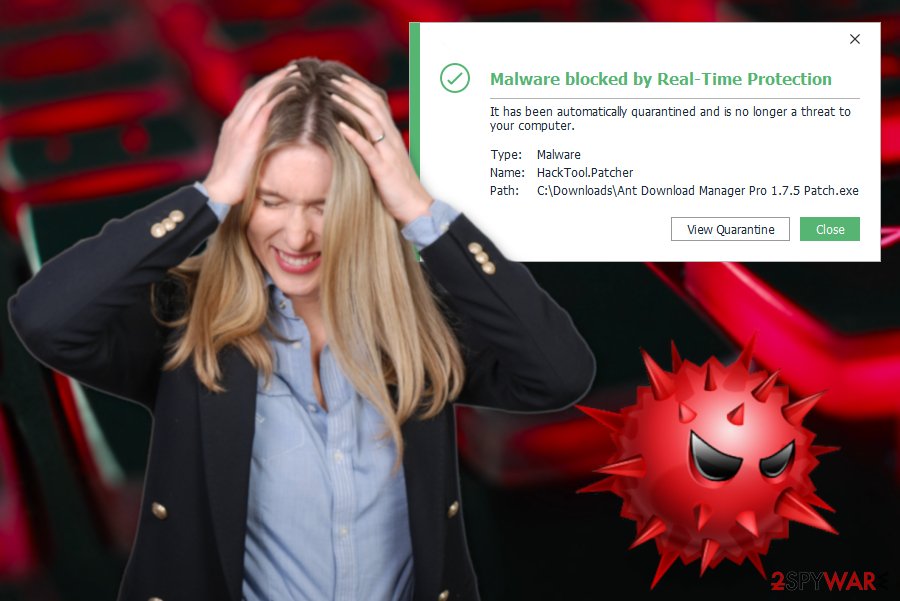 HackTool:Win32/Patcher is a heuristic name of the malware infection detected by the anti-malware tool.

You need to rely on proper tools that are designed to fight malware like ransomware, worms, trojans and other more dangerous versions of cyber threats. HackTool:Win32/Patcher removal can be quick and easy if you choose a trustworthy and legitimate tool like anti-malware programs.

Such software can also ensure that every file and program related to Hack Tool Patcher virus gets detected and eliminated. Also, programs like Reimage Reimage Cleaner Intego can fix virus damage and reinstall needed Windows files, that malware may damage or corrupt. The occasional full system scan cleans useless programs, files and improves the general performance of the device significantly.

When you keep the system up-to-date it is especially important how you choose the software provider and the source of your files, programs. When you download illegal applications or patches and crack your operating system or tools, you risk getting malware installed at the same time. You should note that such malicious file may be hidden in those cracks or come as an extra part of the installation setup. Choose Advanced options every time you download anything.

Infected files also come via spam email campaigns during which malicious actors include executables, Excel, Word, PDF files as attachments and when you open the email with such attachments and even download the file on the machine, you let the malware infiltrate the computer.

Various malicious websites can spread these files, other malware and infect the machine directly from the domain without any initial download or installation. These are sneaky malware, so pay close attention to your activities online and keep the AV tool running.

Get rid of any malware related to HackTool Patcher virus

Threats like HackTool:Win32/Patcher virus or any other trojan, worm, or spyware that comes out of nowhere and cannot be found as a particular program, creates a problem when the user tries to eliminate the malware. For that reason, all these more serious cyber infections require automatic antivirus tools.

HackTool:Win32/Patcher removal can be performed with professional anti-malware tools and security programs like Reimage Reimage Cleaner Intego, SpyHunter 5Combo Cleaner, or Malwarebytes. These are the tools that we can rely on and recommend for the victim of any cyber threat from PUP to a trojan horse.

When it becomes especially difficult to remove HackTool:Win32/Patcher and other malware, you can try rebooting the machine in the Safe Mode with Networking before the full system scan. This mode allows to disable other background programs and run a full system check without any interruption.

To properly fight HackTool:Win32/Patcher, you should enter the Safe Mode first and then scan the machine with antivirus program

You should benefit from the System Restore feature that allows recovering the machine in a previous state when HackTool:Win32/Patcher virus was not running on the PC

Finally, you should always think about the protection of crypto-ransomwares. In order to protect your computer from HackTool:Win32/Patcher and other ransomwares, use a reputable anti-spyware, such as Reimage Reimage Cleaner Intego, SpyHunter 5Combo Cleaner or Malwarebytes

Your opinion regarding HackTool:Win32/Patcher Cancel reply

You can quickly scan the QR code with your mobile device and have HackTool:Win32/Patcher manual removal instructions right in your pocket.