HTML:RedirME-inf is a false positive by Avast or AVG anti-virus, although it might indicate malware 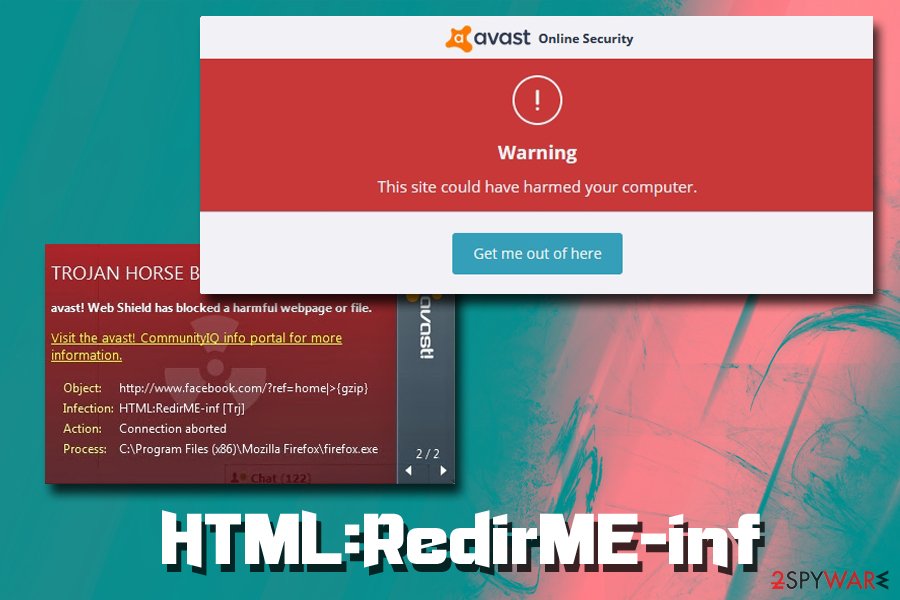 HTML:RedirME-inf is a detection name for a potentially malicious threat when users visit particular websites, although they are not necessarily dangerous. In most of the cases, users complained that their AVG or Avast anti-malware software start spamming Google Chrome, Mozilla Firefox, Internet Explorer, or another browser with HTML:RedirME-inf Trj warnings.

It is likely that the detection of HTML:RedirME-inf is a false positive[1] due to specific bugs within software updates for the engine. Back in 2011, Avast users were greatly affected by this issue, although the security firm quickly released a patch which stops the inadequate spam of detection which occurred on almost all legitimate websites.

Nevertheless, users started complaining again seven years later, as AVG was marking xml.plaimedia.com site as malicious, even though users never visited it, and prompts came when they were using sites like google.ca. All in all, if the detection is not a false positive, HTML:RedirME-inf removal should be performed immediately, as trojans are highly dangerous cyber infections.

Users are confronted with the following message:

We've safely aborted connection to xml.plaimedia.com because it was infected with HTML:RedirME-inf [Trj]

While it is possible that the detection is a false positive, you should not simply ignore it. The definition was put up for a reason, and that it does not mean that the real HTML:RedirME-inf [Trj] trojan infection is not possible.

If that is the case, HTML:RedirME-inf virus can perform a variety of functions on the host machine:

Without a doubt, excessive spying might not only result in unexpected money loss, login credential disclosure, compromised credit history, but also identity fraud or theft. Therefore, it is vital to remove HTML:RedirME-inf before it can cause any of the mentioned damages. 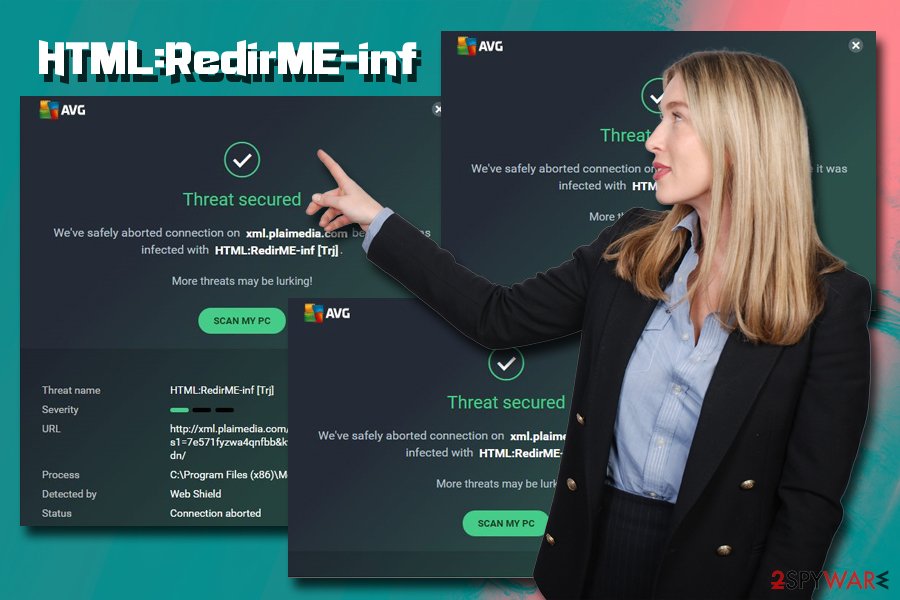 HTML:RedirME-inf is a trojan horse that can record sensitive information about infected users, although can also be a false positive

To do that, users should scan their devices with an anti-malware program, and it would be best to do that while in Safe Mode. We explain how to do that in the instructions below. After that, it is strongly recommended to use Reimage Reimage Cleaner Intego for a swift recovery.

However, make sure you first make sure that HTML:RedirME-inf is not a false positive. To do that, scan that detected file with tools like Virus Total, or use an alternative security application, such as SpyHunter 5Combo Cleaner.

Avoid trojan infections with the help of industry experts advise

Trojans are intrusive in nature, so they can perform a variety of system modifications, all while harvesting the most sensitive user information and not showing any signs of the activity whatsoever. For that reason, malware can lurk inside the machine for months before it is detected – if no adequate security measures are practiced, that is.

Users should be aware that negligence when it comes to online safety can result in drastic consequences, such as money loss, data loss, and other sensitive details expose to malicious actors. Thus, to avoid such consequences, you should take the advice from German security experts:[2]

HTML:RedirME-inf is not a new threat, and has been around at least since 2011

Remove HTML:RedirME-inf malware from your computer

Many reports has suggested that HTML:RedirME-inf [Trj] is, in fact, a false positive. These inconsistancies can happen from time to time, because certain files or installed programs might display a behavior that looks similar to malware. In such a case, anti-virus engine detects it as malicious and flags it. To make sure it is not a false detection, use another malware scanner.

If you are sure that the detection is not a false positive, you should not delay HTML:RedirME-inf removal. Because the infection is a trojan, it is not recommended trying to terminate it manually, as it performs deep modifications within the system, and only IT expert would be able to do such a tanks.

Thus, use anti-malware software to remove HTML:RedirME-inf virus. Before you perform a scan, enter Safe Mode with Networking as explained below.

To remove  HTML:RedirME-inf virus, you should enter Safe Mode with Networking and perform a full system scan:

You can also use System Restore to terminate the infection:

Finally, you should always think about the protection of crypto-ransomwares. In order to protect your computer from HTML:RedirME-inf and other ransomwares, use a reputable anti-spyware, such as Reimage Reimage Cleaner Intego, SpyHunter 5Combo Cleaner or Malwarebytes

Your opinion regarding HTML:RedirME-inf Cancel reply

You can quickly scan the QR code with your mobile device and have HTML:RedirME-inf manual removal instructions right in your pocket.