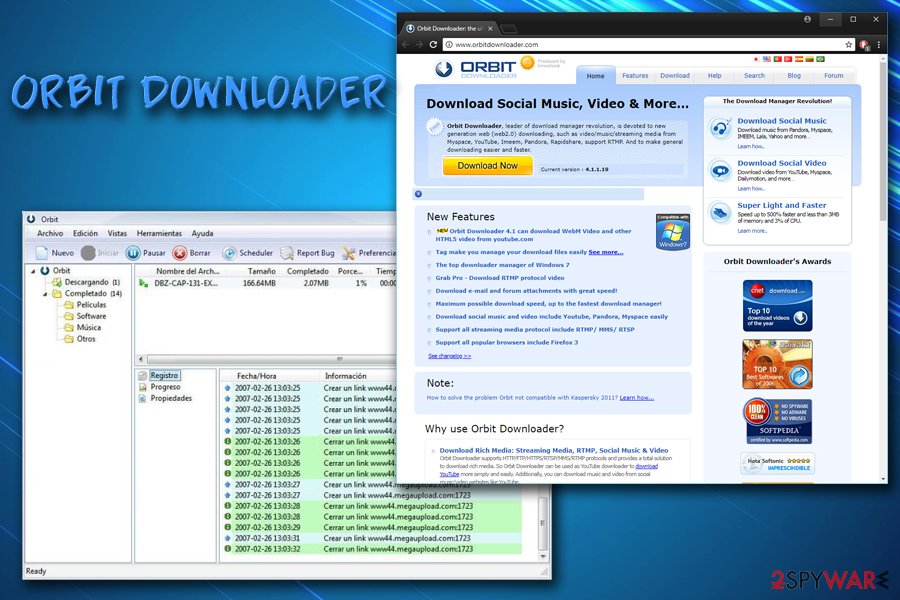 Orbit Downloader by Innoshock is a potentially unwanted program[1] that is presented as a download manager for Windows operating systems. Its primary function is to download embedded video files from such websites as YouTube or Vimeo. Only Internet Explorer, Mozilla Firefox, Opera and Maxthon web browser users can utilize this tool. Despite it being remarkably popular due to its functionality and improved download speeds, the application turned out to be spreading malware since version 4.1.1.15.

Originally, Orbit belongs to adware[2] category, meaning that it uses pop-up ads, offers, deals, coupons, discounts, in-text links and auto-play video to display sponsored content. The developers get revenue for every click made by users (pay-per-click-scheme), and it does not matter if clicks were accidental or not. However, users often are left frustrated due to the immense amount of adverts flooding their browsers, and they rush to find Orbit removal instructions online.

Typically, free programs like Orbit Downloader come in a package with other software users obtain on the internet. Unfortunately, developers of adware do not disclose how their products are installed, and users often get tricked. This is called bundling – a marketing campaign used by freeware and PUP developers. Although this distribution strategy is legal, users should be aware of it to avoid unwanted applications being installed on their computers by picking Advanced or Custom installation modes.

Another bad trait of adware is its ability to track their users' online behavior. Spying can range from mild to severe, and typically gathered data includes:

In some cases, PUPs can even gather personal data, like email address or full name. Security experts at viruset.no[3] recommend users not to disclose sensitive information online, especially when it comes to less-known websites. In the unfortunate turn of events, data leak might cause money theft or even identity fraud. Thus, do not hesitate whether or not you need to remove Orbit Downloader virus from your computer – do it immediately. For that, you can use Reimage Reimage Cleaner Intego or any other security software you trust. 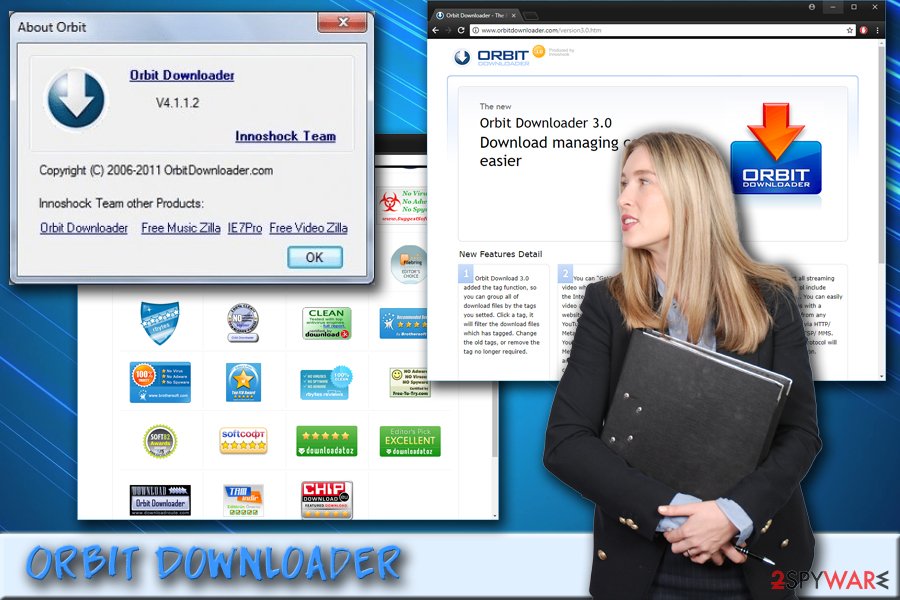 Security researchers found that Orbit was used for DDoS attacks

Orbit Downloader was around since 2006, and, considering the amount of potentially unwanted programs nowadays, it was nothing out of the ordinary – until August 2013.

Although download managers are popular tools and used by many, they can also be utilized by cybercriminals just as efficiently. Security researchers at ESET found[4] that, because the program is generating a significant amount of traffic, it can be used by hackers as a tool for Distributed Denial of Service[5] (DDoS) attacks. Cybersecurity experts identify Orbit malware as Win32/DDoS.Orbiter.A.

The DDoS Functionality was present within the program for some time, but it was used for malicious purposes only since version 4.1.1.15.

Soon after the discovery of the DDoS capability of the program, many popular software downloading websites started removing Orbit Downloader from their sites, which included:

It is unclear whether the developer made any statements about the malware component present in their product, but as of now, security experts urge users to remove Win32/DDoS.Orbiter.A from their machines and use a different file downloading program.

Unwanted program developers count on the fact that users may like the product they are offering. However, the fact that they introduce their software in a deceptive manner sparks concerns. It is not surprising, as PUP developers are well aware of the fact that most users are typically rushing through installation steps as they want to be done with the installation process as soon as possible.

That's why they employ freeware and shareware developers to inject adware into their installers. Unfortunately, it does not only come from shady installers of unknown software – major brands like Adobe or Flash are known to distribute additional components within their software or its updates. Therefore, it is vital to stay vigilant to avoid various junk on your machine.

We urge users never to rush installation process and read instructions very carefully. When prompted, always pick Advanced or Custom installation settings, and avoid Recommended/Quick ones. This way, you will be able to get rid of the ticks next to add-ons, PDF creators, file converters, download managers, etc. 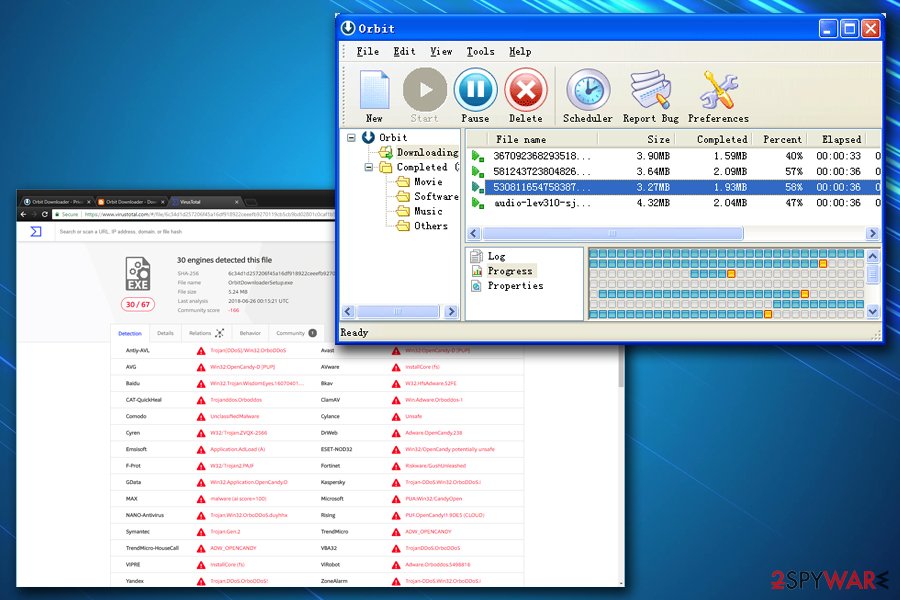 The installation executable is recognized as malware by Virus Total

Remove Orbit malware from your computer

The fact that the program is a PUP should warrant the Orbit removal. Nevertheless, in this case, it is an absolute must, as it is being identified as malware which enables hackers to perform DDoS attacks. Even though you can get rid of Orbit Downloader manually, we also recommend scanning your computer for any traces of malware.

If you want to remove Orbit Downloader virus manually, please check our instructions below this text. Make sure you execute each step attentively and in the correct order. Do not forget that you will have to reset all of your browsers manually to make sure that to settings are left off.

Because Orbit is considered to be malware, we highly recommend scanning your machine with reputable anti-virus software if you decided to remove Orbit manually. Otherwise, the security program will take care of everything automatically.

To eliminate Orbit malware from your Windows device, follow these steps:

Once these steps are finished, Orbit should be removed from your Microsoft Edge browser.

Get rid of Orbit from Mozilla Firefox (FF)

A full reset of Firefox browser is needed to make sure that no altered settings remain:

Your opinion regarding Orbit Cancel reply

You can quickly scan the QR code with your mobile device and have Orbit manual removal instructions right in your pocket.