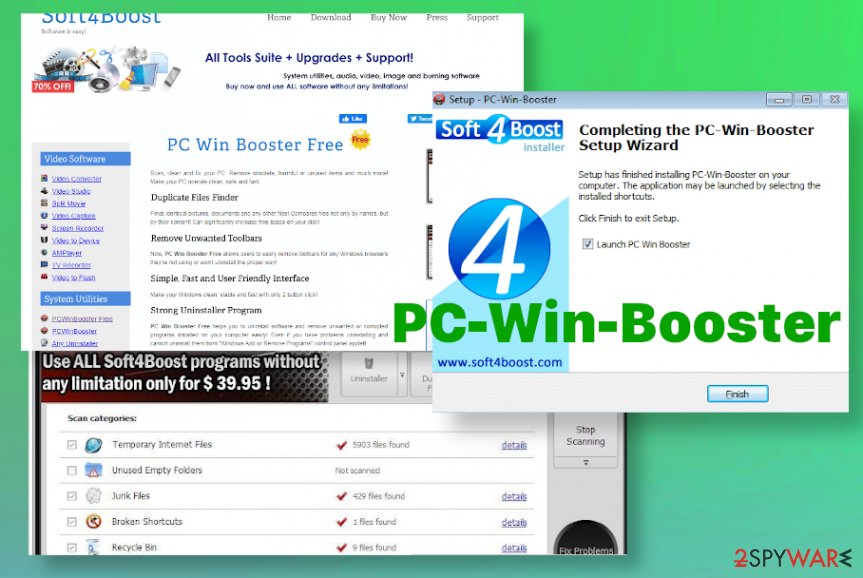 PC-Win-Booster –  program that has earned a negative reputation because some of the AV tools detect the application as potentially unwanted and indicates that the program is useless. All the features listed on the official Soft4Boost site that is promoting and delivering this optimizer claim to improve the speed and performance quality of the machine and even clean virus damage or malware programs directly. This is the deceptive program that lists all the cleaning features and aims to get users to purchase the full licensed version that is not fighting malware os fixing critical errors either.

This is a potentially unwanted program because it is not living up to all the claims and because of the issue with the distribution. Some of the users that have encountered the sudden installation of this tool call it a PC Win Booster virus. It is common for PUP developers to push their programs on the misleading sites, but other techniques include freeware installations, other useless cleaners, and so on. Users do not notice the download and installation of the shady tool when it comes alongside the other program installed on purpose.

PC-Win-Booster system optimizer uses intentional false positives to convince users that systems and devices have problems that their paid version of the optimizer can solve. PUP developers try to sell their products, claiming that the application fixes all the issues and improves the system fully.

Unfortunately, some desperate users fall for these tricks and install the useless PC-Win-Booster on the machine on purpose. It shouldn't be taken seriously because these programs prey on people that are gullible and desperate to get more life out of their devices. All the promotional ads and the official website has all the claims that encourage people to purchase the full version even because all the functions seem useful and needed.

PC-Win-Booster should fix PC errors, make the system run smoother, quicker, and free up some memory and space on the device by cleaning junk files, registry entries, useless programs, and so on. It even claims to solve issues regarding malware or unwanted applications. These exaggerated claims look legitimate enough for the people who allow the tool to infect the machine.

When PC-Win-Booster gets installed or injected via deceptive techniques and freeware bundling methods, the dishonest scan results show up. The tool claims to check the system fully and indicates many problems, errors that need to be fixed to help improve the PC performance and solve crucial problems with the OS. There are no features that could help with the machine and security.

You need to avoid getting the program installed or remove PC-Win-Booster from the system as soon as possible because it is not improving any part of the machine with those registry cleaning functions or junk file elimination services. This is one of many Windows tools that even Microsoft[2] is warning users about. This is not the program that could be used. Especially, when the PUP is considered intrusive and dangerous. 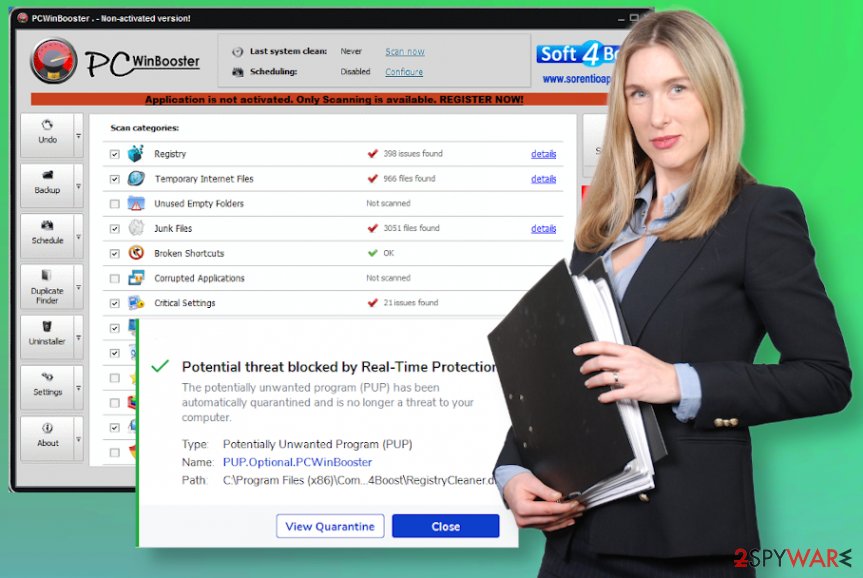 PC-Win-Booster is the program that can be detected as potentially malicious or dangerous. PC Win Booster rogue tool focuses on showing the list with issues that look legitimate and scary enough, so people can fall for the promotional trick and pay for the tool that is supposedly going to fix all the problems. However, the paid version can only clear some junk files and clear out the list of errors, not the system.

This tool cannot make any positive changes on the machine, but it makes alterations that affect PC-Win-Booster removal in a significant way. When some functions of the machine and programs that run on the computer get disabled, finding all the parts of the shady tool can be difficult. Anti-malware tools are needed because those detection engines are focusing on malicious or potentially dangerous behavior, so files can be found this way.

In general, experts[3] do not call this program a virus or malicious application, but PC-Win-Booster can be associated with shady services, third-party programs. There are additional symptoms of these PUPs, in regards to third-party services and advertisers. Redirects, banners, pop-ups, and other forms of commercial content fill up the screen with any type of PUP is injected on the system.

PC Win Booster and third-party companies can collect information about users and record views, visits to monetize them later. Unfortunately, tracked data and accessed information can be used for personalized ads and other intrusive content delivery. When you encounter any like this, be sure that adware or PUP-type intruder is running full speed on the computer.

The sooner you clean the system, the better. You need to clear all traces of the shady program, so run the proper anti-malware tool and terminate PC-Win-Booster, other tools, browser-based applications. Then you should run tools like ReimageIntego or system optimizer and find or even fix the virus damage that was left behind.

PC-Win-Booster is the useless tool that cannot do any of the functions listed on the official site it is distributed on.

Ways to receive the rogue tool without noticing

These so-called system optimizers use various methods for the shady and intrusive installation. In most cases, developers provide tons of promotional ads for the program and run the official website, which distributes the program as a great, system improving a piece of software. Even though those claims seem real and attractive, you shouldn't trust any random pages and PUP developers that spread tools on the internet.

The best way to avoid any infections is by choosing proper sources, official providers of tools, and applications. This way you ensure that there are no additional programs included in the downloading bundle or shady intruders.

However, the best option in such cases is proper installation methods because by selecting Advanced or Custom methods, you can go through the full list of the application included and de-select any shady parts of the installation list. Do so when downloading anything from the internet and avoid any shady PUP infiltrations.

You may have installed this tool yourself on purpose because you thought that all the claims are true, and this application will improve your time on the machine. Or your device started to run slow when the PC-Win-Booster virus appeared out of nowhere. No matter how you got the program on the computer, you need to perform a full system cleaning procedures, so there are no PUPs, or browser-based tools that can trigger unwanted activities, changes, and damage.

However, when you purchase the full versions of the useless software, you lose money. It is possible to contact creators and ask for a refund, but that may be the issue since PUP developers are not cooperative, in most cases. It may be the issue that you can remove PC-Win-Booster from the system using proper anti-malware tools and get rid of the unwanted activities, but money remains lost.

PC-Win-Booster removal is more important still because keeping such a tool on the system can trigger other installations and also lead to serious damage when the junk file cleaning and registry altering functions that the tool has affects crucial parts of the PC. If that happens, you need to fix those files yourself. It is better to get PC repair tools and let them safely recover the system to a normal state.

Get rid of PC Win Booster from Windows systems

Clear any traces of the shady tool, so all the programs related to PC-Win-Booster PUP

After uninstalling this potentially unwanted program (PUP) and fixing each of your web browsers, we recommend you to scan your PC system with a reputable anti-spyware. This will help you to get rid of PC Win Booster registry traces and will also identify related parasites or possible malware infections on your computer. For that you can use our top-rated malware remover: ReimageIntego, SpyHunter 5Combo Cleaner or Malwarebytes.

You can quickly scan the QR code with your mobile device and have PC Win Booster manual removal instructions right in your pocket.