Pony virus – a dangerous malware that can harvest personal data 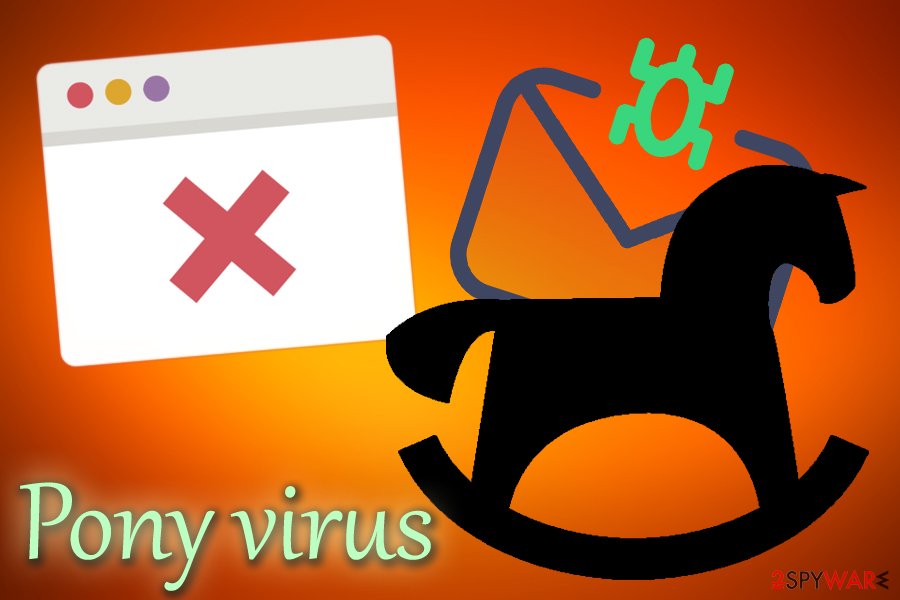 Pony virus is a trojan that infiltrates computers using deceptive techniques, such as fake Adobe Flash updates,[1] The HoeflerText Font Wasn't Found scam, spam emails, or as a drive-by download.[2] As soon as the user initiates the code, it loads Pony Loader into Windows, which is the main executable of malware (it is automatically terminated after the execution). The malicious application has one goal – to steal sensitive information and send it to hacker's hands. While losing personal data to cybercrooks is quite devastating, dealing with additional malware downloaded by Pony virus can be frustrating, to say the least.

Pony virus was designed in order to steal personal passwords that are saved on more than a hundred apps and social media, games, banking and other accounts. As soon as the data is harvested, it is sent to Command & Control Server – a remote server that is only accessible to the attackers. This is precisely how ransomware infection behaves when it tries to send the generated key to criminals.

Similarly to ransomware, Pony virus has only one goal – to retrieve money from unsuspecting victims illegally. For example, stolen banking credentials can be used to access users' money directly. Additionally, any other personal data (such as name, address, email, Social Security number, driver's license number, etc.) can be sold on the Dark Web or used for identity theft. As you can see, the consequences can be catastrophic. To prevent malware from causing more harm, you should remove Pony virus ASAP.

Another terrifying trait of Pony virus is that it is connected to a botnet[3] which can make the targeted computer into malicious malware spreading tool. For example, the infamous Rustock botnet was capable of sending out 192 phishing emails per compromised PC per minute. And of course, the more people click on the contaminated attachment, the more infected machines distribute malware automatically.

Furthermore, Pony virus serves as a backdoor to other malware. It is not uncommon for trojans to distribute ransomware. For example, one of the most prominent botnets – Necrus – is delivering such treats as Locky or GlobeImposter. These malicious applications are capable of completely locking up personal files and demanding a ransom to be paid in Bitcoin or another crypto. 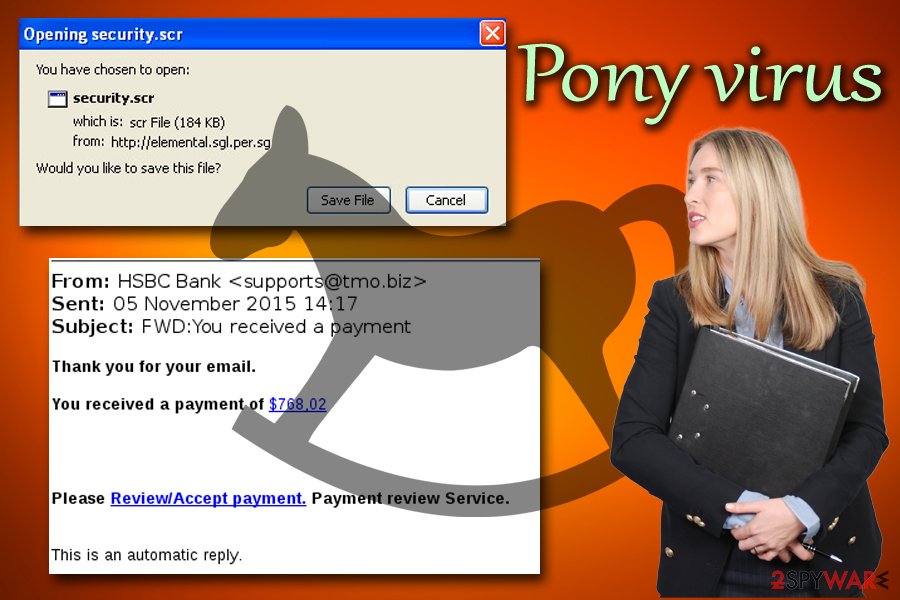 Pony virus is also capable stealing of digital wallets that contain cryptocurrency. According to reports,[4] the malware targets different currencies, such as Bitcoin, Litecoin, and others. Victims are known to suffer more than $220,000 in damages caused by Pony trojan.

If you suspect that you could be infected with the malware (for example, you recently opened a suspicious attachment in the spam email), make sure you scan your computer using Reimage Reimage Cleaner Intego, Malwarebytes or other reliable anti-malware software. This action will guarantee a prompt Pony virus removal.

Trojans can be attached to almost anything: free games, illegal programs, malicious browser plug-ins, and other questionable software. Such programs are a perfect distribution mechanism for viruses, so there is no surprise that hackers are usually using them for spreading their threats around.

How could you avoid malware? First of all, make sure you don't download any executables (they might be disguised under different extensions, such as .pdf, .html, .scr, etc.) from spam emails. Clicking links inside questionable messages would result in the infection as well. Therefore, make sure the email you are viewing is legitimate and comes from the person it is supposed to be.

When downloading and installing programs, it is advised to do a small research about them and check how your desired program is reviewed online. You should look for comments and similar reviews that could let you know about the trustworthiness of the application. Also, make sure you avoid fraudulent websites that might be filled with misleading/illegal/malicious content.

For users who are using digital currencies, security experts[5] strongly advice to store them in safe and encrypted e-wallets. In this case, the best solution would be choosing an offline storing device that guarantees better protection.

Finally, install powerful anti-spyware that is capable of preventing infiltration of such threats like this one. If you think that the virus has already infiltrated your computer and now is trying to steal your money, you should follow the guidelines below and check the system for this virus.

Pony virus removal should be your top priority, as it can cause more damage as the time goes on (e.g., additional malware infiltration). Therefore, download and install reputable security software an perform a full system scan. We recommend using Reimage Reimage Cleaner Intego or Malwarebytes, as these security applications are capable of detecting malware and eliminating all its tracers on the computer.

Security experts do not recommend trying to remove Pony virus manually. Such action can lead to severe damage to system files and will ultimately fail to get rid of the malicious application entirely. Only trained IT professionals are capable of such action.

You can also use System Restore for malware elimination:

Finally, you should always think about the protection of crypto-ransomwares. In order to protect your computer from Pony and other ransomwares, use a reputable anti-spyware, such as Reimage Reimage Cleaner Intego, SpyHunter 5Combo Cleaner or Malwarebytes

You can quickly scan the QR code with your mobile device and have Pony virus manual removal instructions right in your pocket.