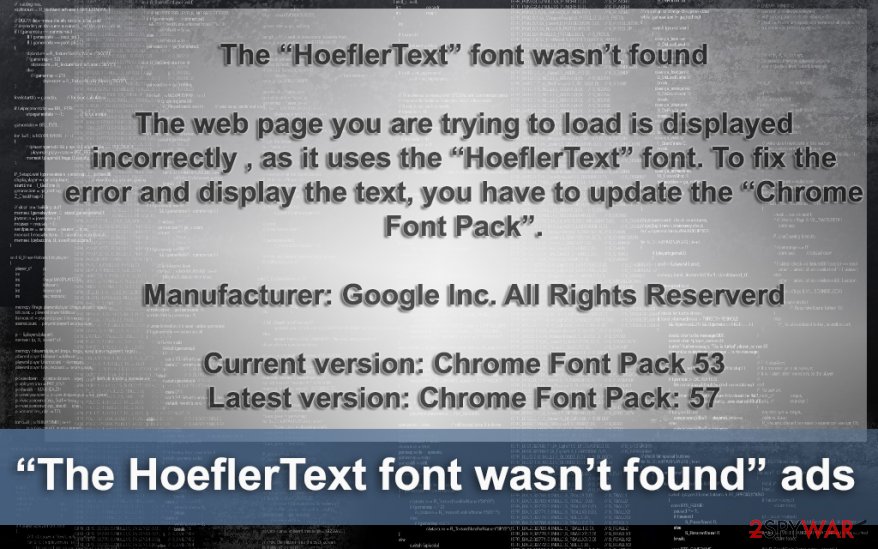 “The HoeflerText font wasn’t found” is a virus that distributes GandCrab, Spora, Zeus Panda, and other dangerous malware

“The HoeflerText font wasn’t found” is a cleverly engineered scam that displays a fraudulent popup, asking users to install the fake font to view the contents of the site.[1] It mainly targets Google Chrome and Mozilla Firefox users, as the alleged missing packages come under names Chrome_Font.exe, Chrome_Font_v7.87.zip, and Mozilla_Font_v7.87.zip, although users who use Safari or other browsers might encounter a “The HoeflerText font wasn’t found” pop-up message as well. The bogus alert shows up when the potential victim visits compromised websites[2] infected with a malicious JavaScript code.[3] The scam is developed to automatically scramble the text on a hacked site, which is why a warning about Chrome being outdated seems credible for less experienced PC users. Those who agree to install the fake font end up with dangerous malware, like ransomware or a banking trojan, on their system.

The initial version of the HoeflerText font[4] wasn’t found on the affected computer scam asks potential victims to update “Chrome Font Pack” in order to fix this error. However, instead of this font pack, you can end up with Fleercivet Ad Clicking Trojan or even Spora ransomware on your computer.[5] However, Spora is not the only crypto-malware that might be disseminated via HoeflerText scam.

At the end of February 2018, nao_sec analysis revealed that HoeflerText Font Update virus turned to GandCrab ransomware distribution. When redirected to hacked websites, potential victims are offered to fix the problem by installing an update for Google's Font Pack. Unfortunately, the supposed Font Pack downloads Font_Update.exe executable, which runs g.js and hacks the legitimate Netsupport Manager tool to download the ransomware payload. In case of success, the GandCrab ransomware renders all personal files useless by locking them with .GDCB file extension.

Although the “hoefler text” font wasn't found Chrome version prevails, on May 2017, malware researchers has discovered a new variant of the scam that targets Mozilla Firefox users. Cyber criminals use the same social engineering scheme. However, this time users are asked to install “Mozilla Font Pack.” However, installation of this fake update ends up terribly wrong. This scam distributes a Zeus Panda banking trojan.

Beware that the developers of this scam made it look very professional and realistic by filling it with the names of current and latest versions of the font and claiming that the message is delivered by Google or Mozilla Corporation. Bear in mind that your browser doesn’t need any updated fonts from the suspicious notification which is designed with the only purpose – to deceive you and make you open a malicious executive file that you can download from the described pop-up. 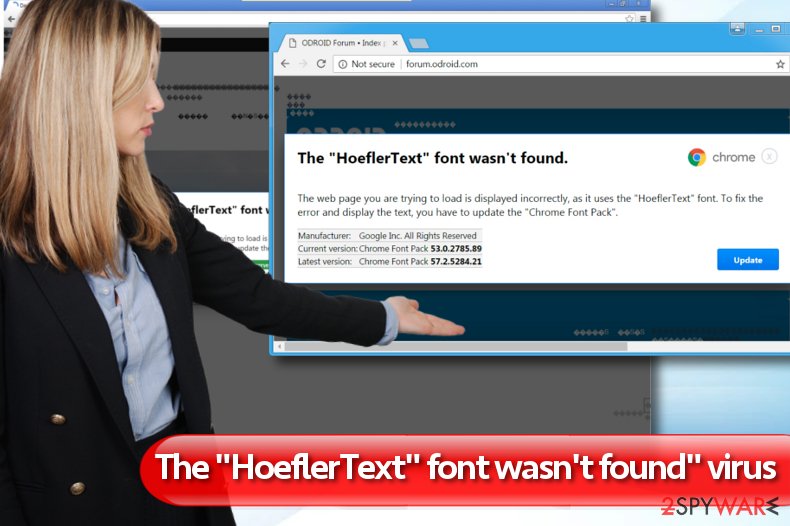 We suggest that you stay away from websites that display the defined alert because it is a sign that they have been compromised by cyber criminals. If you agreed to install the described update, your browser and computer need you to start “The HoeflerText font wasn’t found” removal. It’s the only way to get rid of the malware that infiltrated the PC and protect your computer from further attacks.

Remember that malicious programs are dangerous cyber threats[6] that can download and install additional malware to the compromised system, so you should take actions immediately to remove “The HoeflerText font wasn’t found” malware from the system. Therefore, do not hesitate and uninstall “The HoeflerText font wasn’t found” virus with the help of anti-malware software like Reimage Reimage Cleaner Intego or SpyHunter 5Combo Cleaner.

Considering how successful this technique was, it is not surprising that ransomware developers were quick to try these new malware distribution methods. The first one to employ “The HoeflerText font wasn’t found” scam[7] was Spora virus, the infamous ransomware that is well-known for using sophisticated ransom payment websites and providing a variety of paid services to the victims.

Ransomware is one of the most devastating cyber infections – it encrypts files with a sophisticated cryptography algorithms and suggests paying a ransom in exchange for data decryption tool. Based on the fact how quickly Spora adapts new distribution techniques and also considering how professionally-made this virus is, we expect nothing more but an increased number of virus attacks shortly.

Reportedly, compromised websites feature a Javascript code that attackers insert at the end of the page. This JavaScript code recognizes visitors who enter the site via Chrome and shows not the real, but a corrupted version of the website and triggers a pop-up stating that visitor's Chrome browser lacks the HoeflerText font, and suggests installing it in order to view contents of the website. The message says:

The new campaign that spreads the ransomware promotes Update.exe file. If the user clicks the Update button, downloads this file and executes it, the system gets infected with Spora malware, and the victim loses access to all of his files instantly. 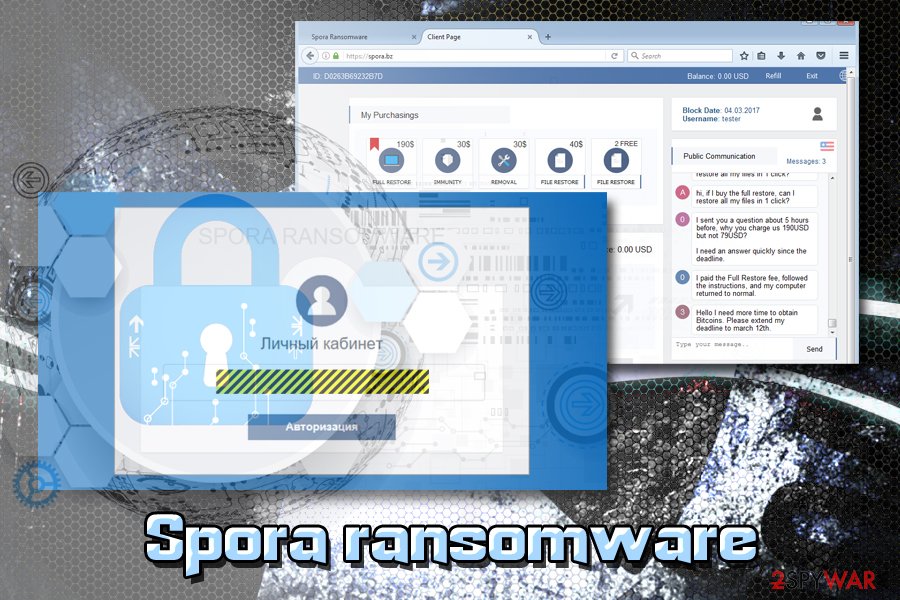 At the beginning of March 2017, security experts have noticed new HoeflerText ads attack targeted at Mozilla Firefox users.[8] Victims are tricked into visiting an infected website that includes a malicious JavaScript code. In this site, people receive a warning message that HoeflerText font was not found and due to this reason this web page is displayed incorrectly.

In order to fix this issue, victims are asked to install “Mozilla Font Pack” update. This alert window might look legitimate because it provides information about manufacturer, current and latest version of the Mozilla. Thus, computer users can get quite easily get tricked into clicking an “Update” button.

Once they do that, they initiate a download procedure. Users are shown a regular download window which informs about downloading a “Mozilla_Font_v7.87.zip” archive. Inside it, there’s a malicious Mozilla_Font_v7.87.js JavaScript file.

Meanwhile, the crafted website changes the fake alert window and provides instructions how to install a fake Mozilla font package. As soon as the download completes, users need to double-click the JavaScript file and start the installation. Once it’s done, users are supposed to reboot Mozilla and enjoy installed updates.

However, instead of updates, users agree to install Panda Banker virus. The virus is one of many versions of Zeus banking Trojan; thus, their private information is put at risk. When users click on this malicious file, they allow downloading a malware payload called “Mozilla_Font_v7.87.exe.”

As soon as it is successfully saved in C:\ directory, it is executed and starts the installation of banking Trojan. Malware infects two svchost.exe processes and launches its hazardous task. If you got tricked into this scam, you should initiate virus removal immediately by running a full system scan with malware removal software.

Followed by a great success of Spora distribution, hackers decided to use the HoeflerText font update scam for GandCrab ransomware distribution. Cybersecurity researcher officially shared the results of the nao_sec analysis,[9] which revealed the new tendency of the HoeflerText virus to redirect people to hacked sites injected with a JavaScript, which display scrambled text by default. Such sites generate a fake update prompt and urge the potential victim to update the Font Pack to fix the scrambled text. 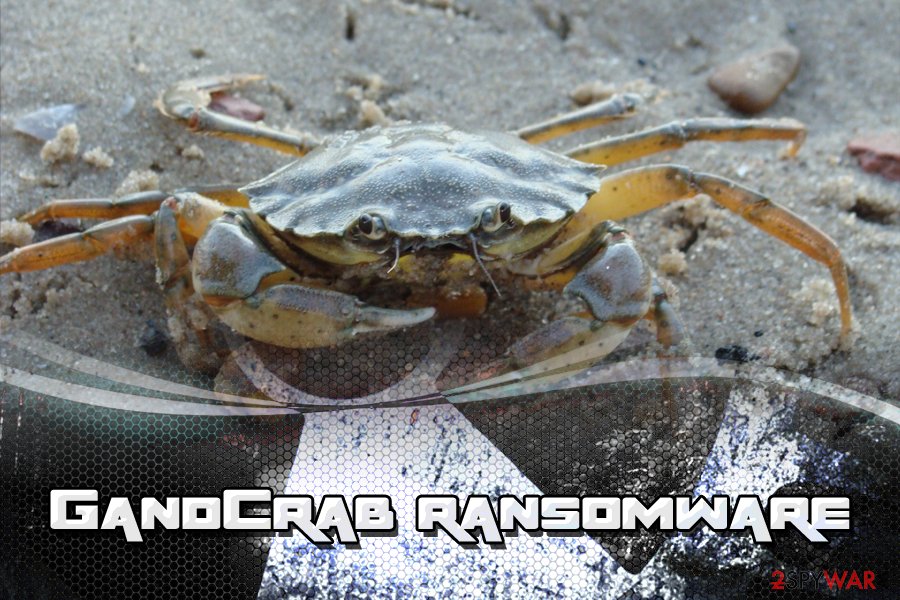 If Chrome's or Firefox's user clicks on the Update button, the Font_Update.exe file is downloaded and executes a g.js script. The latter may differ depending on the location of the victim. g.js file connects to NetSupport Manager remote access utility and can be found in a tokipp folder under %AppData%. In other words, the “hoeflertext” font wasn't found virus employs Font_Update.exe executable to run g.js script, which hacks the legitimate NetSupport Manager tool to download the GandCrab ransomware payload.

Thus, Google Chrome users have to beware that Font_Update.exe is not a HoeflerText font update. It's a GandCrab ransomware executable, which once activated renders all personal files useless by locking them with .GDCB file extension. In general, do not fall for clicking on pop-ups that offer to download updates unless you like dealing with cyber infections continuously.

As we have mentioned before, you can encounter these pop-ups on websites compromised by hackers who insert an additional piece of JavaScript code at the end of the page's source code. Consequently, Chrome or Firefox users will see a corrupted version of the website instead of the real one.

What is more, the additional code prompts a pop-up message stating that “The HoeflerText font wasn’t found.” If the victim agrees to install the suggested update, one simply downloads the Chrome_Update.exe or Mozilla_Font_v7.87.js file, which needs to be opened in order to activate the malware.

This fake Chrome update reportedly was used to distribute ad fraud malware dubbed Fleercivet[10]. As far as we know, the latest compromised websites that display “The HoeflerText font wasn’t found” alerts are serving Update.exe file, which is an installer for Spora ransomware virus.

Meanwhile, a fraudulent Firefox update is used for distribution and infiltration of Panda Banking trojan. Thus, this alert includes similar information about inability to show a website's content correctly and asks to install necessary updates. If you happen to enter a website that displays the described pop-up, better quit it immediately and do not come back to it. It might take some time for it to be fixed. If you have encountered such website, you can report it to us. 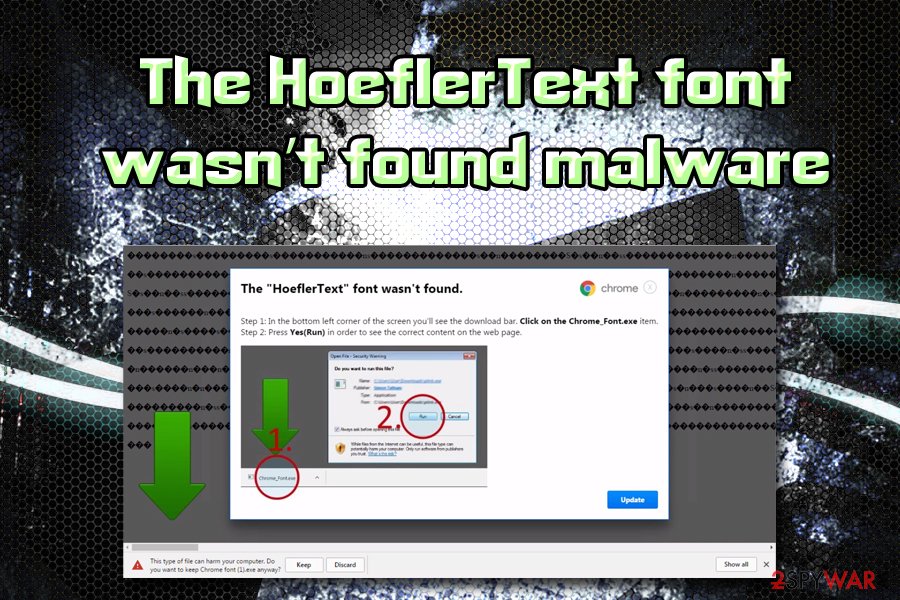 Google Chrome will usually warn you that the file might be malicious. Do not ignore these warnings

Getting rid of “The HoeflerText font wasn’t found” virus

“The HoeflerText font wasn’t found” virus is a very dangerous computer infection. After infiltration, it causes chaos on the browser by delivering misleading pop-ups, and it might also silently connect to various third-party websites via your Internet connection. However, in the worst case, you can get infected with a ransomware after installing this bogus update, and consequences will be devastating. So if you accidentally installed the virus, follow these instructions for a safe “The HoeflerText font wasn’t found” removal.

Finally, you should always think about the protection of crypto-ransomwares. In order to protect your computer from “The HoeflerText font wasn’t found” and other ransomwares, use a reputable anti-spyware, such as Reimage Reimage Cleaner Intego, SpyHunter 5Combo Cleaner or Malwarebytes

You can quickly scan the QR code with your mobile device and have “The HoeflerText font wasn’t found” ads manual removal instructions right in your pocket.