Program:Win32/Wacapew.B!ml can be a false positive detection or refer to an SDBbot Remote Access Trojan 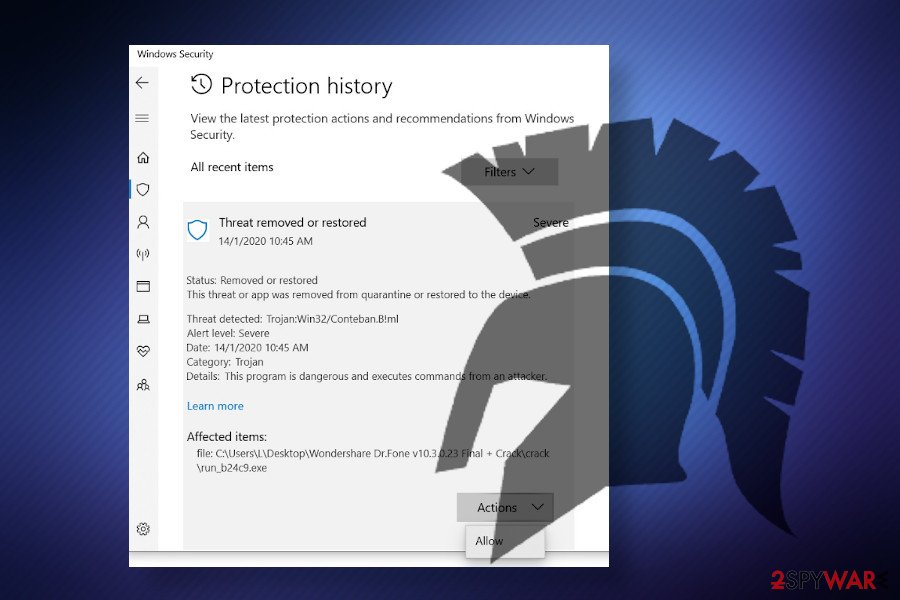 Program:Win32/Wacapew.B!ml is a generic detection name delivered to Windows users by Windows Defender antivirus program. Typically, people encounter a pop-up flagging malicious behavior on the machine after installing a piece of software, especially keygens, cracks of software for hack tools for the Windows license key. This issue has been extremely prevalent in 2019 as there were many reports on Microsoft forums.

Nevertheless, people keep asking how to remove Program:Win32/Wacapew.B!ml trojan up till now. If you keep getting a report from Windows Defender reporting this infection, the culprit may be wrong virus definitions of the in-built Windows security software. However, ignoring this detection may be a huge mistake because the detection may refer to the malicious mswinload0.dll file, which is one of the core processes run by Get2 downloader[1] and SDBbot RAT.

Program:Win32/Wacapew.B!ml detection alert by Windows Defender Antivirus can be a false positive. According to user reports, this security tool has had some issues with virus definitions and tended to flag reliable software as malicious. Upon testing the issue, Microsoft[2] has initiated comprehensive log changes for security intelligence update version 1.293.1036.0 and added renewed threat detections.

Upon the update, the issue regarding false positive detection of the Program:Win32/Wacapew.B!ml virus seems to have stopped. However, people are still having this same detection warning brought by Windows Defender Antivirus, while scanning the machine with alternative AV engines report the following detections:

In this case, the Program:Win32/Wacapew.B!ml detection can be related to a highly dangerous SDBbot Remote Access Trojan and Get2 Downloader. According to Proofpoint researchers who detected this threat in spring 2019, this malicious RAT allows hackers to take full control over the host machine and subsequently sends commands to download and run files, monitor the activities, harvest information, log keystrokes, take screenshots, capture Webcam shoots, and similar.

Program:Win32/Wacapew.B!ml virus is typically downloaded by a Get2 trojan. The latter can get into the system silently via spam email attachments (hpe_s_hp-inv_02[.]xls, dc123456[.]xls, business cloud invoice no142 09-09-2019[.]xls, etc.), roots into the system without manifesting its presence, thus ensuring persistence.

After that, the Get2 Trojan runs a pack of malicious processes and downloads the FlawedGrace, FlawedAmmyy, Snatch, and SDBbot RAT as secondary payloads. According to cybersecurity experts, Windows Defender and other AV security tools recognize the malicious performance of the mswinload0.dll file.

In the registry-based persistence mechanisms, a separate loader DLL is used to execute the RAT payload. In the analyzed sample, the loader was named “RegCodeLoader[.]dll” and saved to disk as “mswinload[.]dll” or “mswinload0[.]dll”. The application shimming-based persistence doesn’t use a separate DLL, but the code it patches into services[.]exe is similar in functionality. In both cases the random registry key and value name is patched into the loader code.

Anyway, if your security suite keeps warning you about a highly dangerous Trojan, evaluate the situation adequately, and take needed actions to remove Program:Win32/Wacapew.B!ml virus from the system completely. If the detection turns out to be related to the SDBbot RAT, it may lead to privacy violations, identity theft, or money loss.

If Program:Win32/Wacapew.B!ml Windows Defender Antivirus detection is bound to this particular security suite and none of the other AV engines detect issues on your device, it's possible that it's a false positive detection and you should report this issue to the Microsoft support. 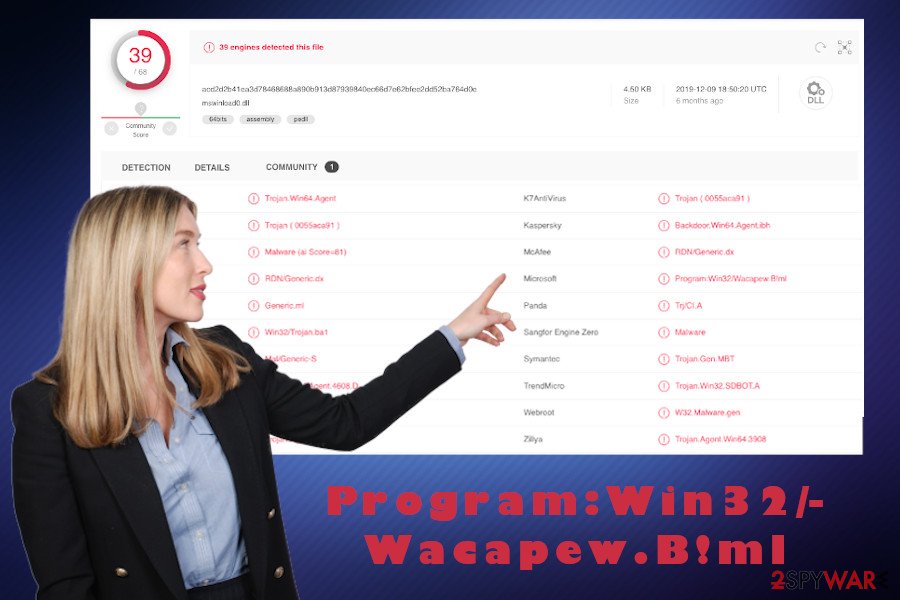 Otherwise, take action to protect yourself from hackers by initiating a thorough Program:Win32/Wacapew.B!ml removal. Malicious Trojans usually enable commands to disable AV software. Therefore, we recommend you to restart the machine into Safe Mode with Networking. You can rely on tools like SpyHunter 5Combo Cleaner, Malwarebytes, or another robust anti-malware.

Spam emails and pirated software can deliver Trojans and other viruses

Malicious payloads can get into the system via malicious spam email attachments or pirated software like keygens and cracks. Beware that suchlike malicious files do not disclose their presence. Instead, they remain in disguise with legitimate Windows system files, such as mswinload0.dll, Svchost.exe, or Winrmsrv.exe.

Payloads are responsible for downloading cyber threats, such as Trojans, spyware, malware, RATs, and more. Beware that they are developed in an extremely sophisticated manner to bypass antivirus programs without being noticed. Thus, you should evaluate online risks to prevent launching malicious files related to viruses.

In most of the cases, such viruses are being disseminated via malicious spam email attachments. Hackers can release tens of thousands of email that contain Microsoft Excel attachments under names like

Such attachments require to enable macros, which is a catch used by hackers to make users download malicious virus payload. Thus, if you received a questionable email message that you were not waiting for, it's better to send it to spam inbox or completely remove it. 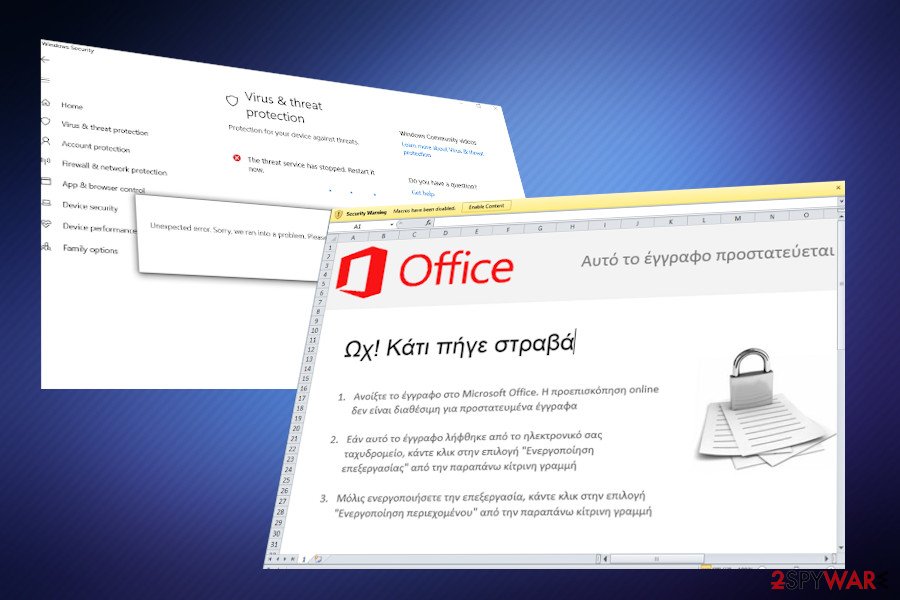 Program:Win32/Wacapew.B!ml warning should not be ignored as they may warn users about a severe cyber infection

Another perfect perfect medium for viruses to spread is pirated software. As pointed out by NoVirus.uk team[4], hackers can fill keygens and software cracks with malicious virus payloads quite easily. Thus, instead of downloading a “help” to hack some paid software, you can get your machine hacked.

Terminate Program:Win32/Wacapew.B!ml trojan to protect yourself from identity theft

When the Program:Win32/Wacapew.B!ml virus gets onto the machine, it can decrease its performance, increase vulnerability, and download other malicious entries to the system. Although it may be difficult to detect this entry manually, you can suspect the presence of a Trojan if the system keeps restarting all of a sudden, CPU usage gets high, AV engine keeps flagging malicious behavior, etc.

Keep in mind that severe computer viruses are exceptionally persistent and can hide malicious files over the system, disable AV tools, quarantine legitimate software, remove Windows registry entries, etc. Therefore, you should go to the Safe Mode and then focus on Program:Win32/Wacapew.B!ml removal.

To remove Program:Win32/Wacapew.B!ml virus completely, try using reputable anti-malware tools, such as Malwarebytes. Robust security tool ensures elimination of malicious files, clean PUPs, and other viruses. Nevertheless, AV tools are not programmed to repair the Registries and other Windows locations. Thus, we recommend scanning the system with Reimage Reimage Cleaner Intego tool that may increase the system's performance.

If you are dealing with the Program:Win32/Wacapew.B!ml trojan virus on your machine, try restarting it to Safe Mode with Networking and launch the security tool. Set it to scan the system thoroughly. Note that a full scan can take some time, so be patient.

Finally, you should always think about the protection of crypto-ransomwares. In order to protect your computer from Program:Win32/Wacapew.B!ml and other ransomwares, use a reputable anti-spyware, such as Reimage Reimage Cleaner Intego, SpyHunter 5Combo Cleaner or Malwarebytes

Your opinion regarding Program:Win32/Wacapew.B!ml Cancel reply

You can quickly scan the QR code with your mobile device and have Program:Win32/Wacapew.B!ml manual removal instructions right in your pocket.