RiskWare.IFEOHijack is a detection for malware which makes Windows launch alternative executable instead of the original one 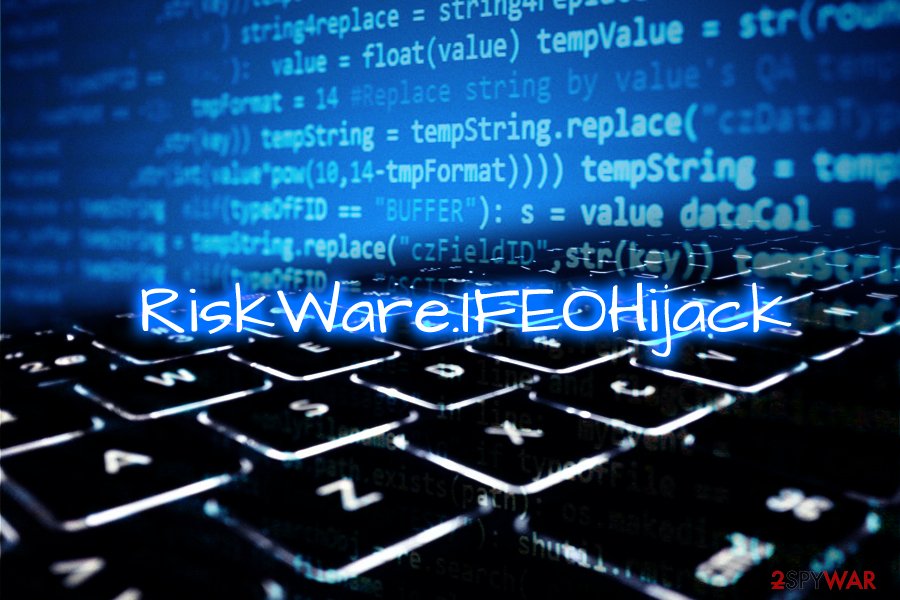 RiskWare.IFEOHijack is a generic detection name used by Malwarebytes in order to indicate behavior which is typical to malware on Windows operating systems. A debugger is set under the Image File Execution Options registry key (HKLM\SOFTWARE\Microsoft\Windows NT\CurrentVersion\Image File Execution Options\) which is related to a particular application, for example, Google Chrome or Mozilla Firefox. Due to the set debugger, when users try to launch a relevant app, they will launch an alternative executable instead and, if the security software is installed, RiskWare.IFEOHijack detection will follow.

While such behavior may be an indication of a false positive (for example, it is known that Avast's Cleanup – Background & startup programs feature alters the key to put applications to sleep),[1] many viruses may engage in these actions, and Malwarebytes flags them as RiskWare.IFEOHijack. Therefore, if you encountered such detection by your security software, it should be investigated further to make sure no malware like banking trojan TrickBot is involved.[2]

The usage of the debugger may cause several issues after RiskWare.IFEOHijack removal. It was reported by Microsoft researchers[3] that users might get ERROR_FILE_NOT_FOUND error when trying to run the target application the registry of which was modified. As a result, the target app will no longer work correctly until the path to the debugger is corrected, or debugger uninstalled.

Additionally, when the File Execution Options key is modified by malware, it can be set to do multiple malicious tasks:[3]

Evil can be done with the Image File Execution Options key. Malware can install themselves as the “debugger” for a frequently-run program (such as Explorer) and thereby inject themselves into the execution sequence.

Note that the ability to use the Image File Execution Options key for evil purposes is not a security hole. To modify the key in the first place requires administrator permissions. Consequently, anybody who can exploit this feature already owns your machine.

This immediately points to the conclusion that those that are infected with RiskWare.IFEOHijack virus most likely installed a malicious application themselves without knowing it, and the required permissions were granted for malware to cause the changes in the first place.

For a full RiskWare.IFEOHijack removal, you should immediately access Safe Mode with Networking and scan the machine with anti-malware software, such as ReimageIntego, SpyHunter 5Combo Cleaner, or Malwarebytes. The security application should be able to eliminate the core malware files, and all the installed components/modules automatically and also fix the Windows registry issues. For further instructions, please check our removal guide below. 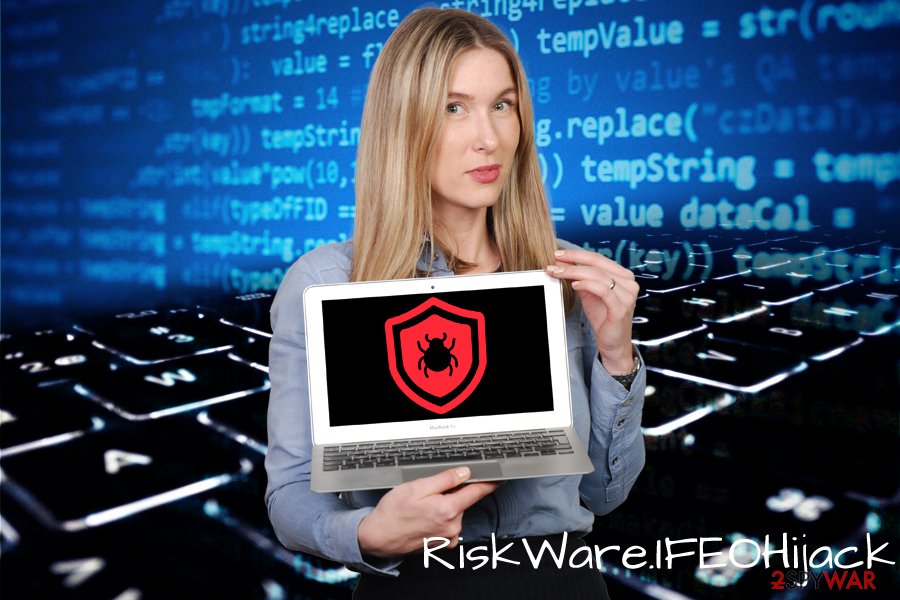 RiskWare.IFEOHijack is a general name by Malwarebytes used to determine malicious software that sets a Debugger key under HKLM\SOFTWARE\Microsoft\Windows NT\CurrentVersion\Image File Execution Options\ in Windows Registry

Protect your machine from online threats by being attentive online

As mentioned above, it is highly likely that malware that triggered the alarm of the security application was installed by the computer owned due to a lack of knowledge when it comes to safe online behavior or simple negligence. Regardless of what the reason is, it is vital to make sure that optimal precautionary measures are applied in order to prevent malware from entering the machine and stealing sensitive data, installing other threats, or performing other malicious actions before the damage can be caused.

Security researchers from novirus.uk[4] warn users that they should always be careful when it comes to online behavior. Here are some general security tips you could follow to prevent malware infections in the future:

Get rid of RiskWare.IFEOHijack virus if it is not a false-positive

While there is a chance that RiskWare.IFEOHijack is indeed a false-positive – its presence on the device always requires taking actions. If you are sure that the file is safe (for example, an element from Avast anti-malware suite may be causing the false-positive detection due to the modification of the precisely same registry key), you should add it to Malwarebyte's exception list as follows:

You can add RiskWare.IFEOHijack file to exclusion if you are sure that the detection is a false-positive

However, you need to remove RiskWare.IFEOHijack virus if it is connected to malware infection. To get a better indication for that, you should scan your machine with other security software in Safe Mode with Networking – we explain how to access it below. RiskWare.IFEOHijack removal should prevent personal information compromise or a complete takeover of your machine by malicious actors.

The best environment to delete the malware in is Safe Mode, as it only loads Windows with only basic drivers and processes, preventing malware from operating. Here is how to enter the mode and remove RiskWare.IFEOHijack by using anti-malware software:

Finally, you should always think about the protection of crypto-ransomwares. In order to protect your computer from RiskWare.IFEOHijack and other ransomwares, use a reputable anti-spyware, such as ReimageIntego, SpyHunter 5Combo Cleaner or Malwarebytes

Your opinion regarding RiskWare.IFEOHijack Cancel reply

You can quickly scan the QR code with your mobile device and have RiskWare.IFEOHijack manual removal instructions right in your pocket.