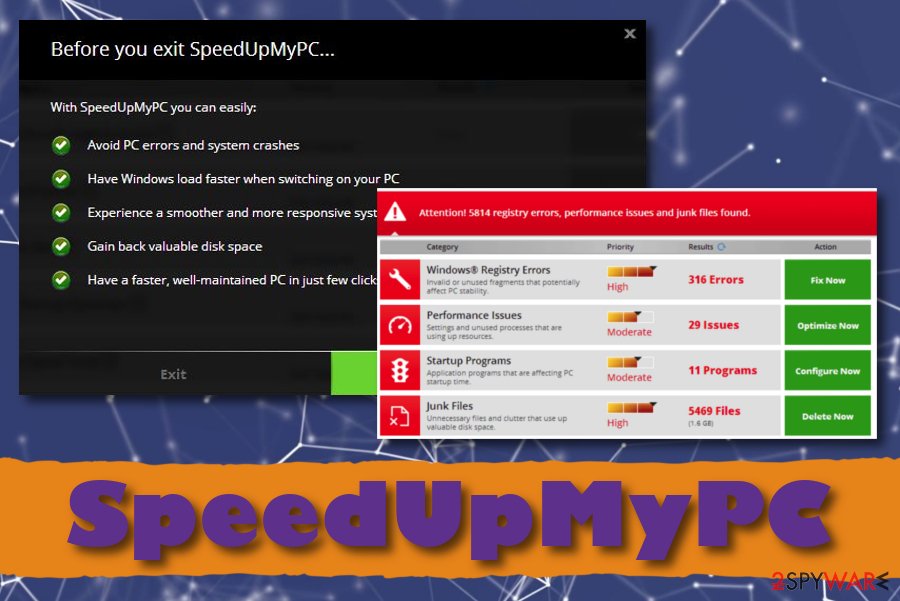 SpeedUpMyPC 2014, also known as Uniblue SpeedUpMyPC 2014, is a questionable program that is presented as a powerful PC optimization tool capable of making PCs run faster. The most important thing that you have to remember about this program is that it may show up on your machine without you even noticing that. According to various reports, it may be spread in a bundle with video recording or streaming software, download managers, PDF creators, and similar programs, so you should be very careful when downloading these programs on your computer. Once SpeedUpMyPC enters the system, it starts checking it for bad registry entries, junk files and other things that are closely related to PC's speed. Later on, these components are presented as crucial errors that can be fixed only by purchasing the license key for the advanced version of the security tool.

SpeedUpMyPC virus is a term used for describing this fake system tool although it is not malicious. However, this name is added due to the secrecy of its installation and misleading scan results. Additionally, this rogue software is capable of modifying the Windows Registry[1] and Task Manager and injecting suspicious entries/files.

If you have somehow installed SpeedUpMyPC on your computer, you will supposedly overcome components such as speedupmypc.exe and speedupmypc.tmp. These types of files allow the security software to boot up when the computer is launched. Furthermore, the PUP creates its own startup tasks in your Task Scheduler for automatical appearance.

You should never trust applications such as SpeedUpMyPC because they provide misleading scan results as dangerous threats that can be cured only with the advanced version of the program. Do not waste your money on completely useless software and use a reputable anti-malware tool for scanning your system properly.

SpeedUpMyPC might claim to be able to optimize, clean, and repair your entire computer. However, this is just a trick to convince you to purchase the entire product. Besides, the program can truly eliminate some registry entries that it provided as hazardous but note that some of the keys might appear to be crucial objects that cannot be removed.

You can find SpeedUpMyPC promoted on different third-party pages or it can come injected into software bundles. It does not matter through what kind of way the PUP enters your system, you should not let it stay here for long as the only things it will do is annoy with its fake virus alerts and take space on your machine/device.

What you should do is remove SpeedUpMyPC from the system and get a reliable tool instead. You can find true errors with a different antivirus program such as Reimage Reimage Cleaner Intego. This way you will be able to measure the results and will supposedly find out that there are no similarities. Also, you can get rid of the app with manual guidelines.

Manual SpeedUpMyPC removal is described and simply showed at the end of this article. These elimination instructions work for both Mac and Windows OS. Even though this rogue security tool[2] shows up mostly on Windows computers we still cannot decline the possibility that developers might release a similar version suitable for Mac OS X.

Suspicious security programs may show up on your PC without downloading them because they are often distributed as a free component of various free programs. This method, that is commonly used between third-party developers is known as bundling and it has already initiated various discussions on the Internet because it relies on the fact that people fail to monitor installation of the software.

Fortunately, avoiding unwanted installations of third-party products is not as complicated as it may seem from the first sight. You just need to opt for the Custom or Advanced installation method and then carefully follow every installation step. Then, look for “optional downloads” and similar hidden components and prevent their installation by unchecking the checkmark that claims that you agree with their installation.

Experts from NoVirus.uk[3] claim that another popular downloading source of potentially unwanted products is third-party websites. There might be more than one source that promotes the same product as this type of method brings greater income. Do not get tricked by such websites and always use only official downloading sources for your software. Additionally, you should run antivirus protection that will alert if you aim to install anything suspicious.

Kill all processes related to SpeedUpMyPC

Technically, this fake computer repair tool is not malware but the name SpeedUpMyPC 2014 virus is stilled used as we have seen lots of complaints about it. If you are bothered by its constant system scanners, exaggerated reports about system issues and similar annoying activities, you shouldn't waste the time and remove this system optimizer from your computer.

In order to succeed in SpeedUpMyPC 2014 removal process, you need to scan your entire machine and locate all suspicious entries and files that the potentially unwanted program might have brought to the system. For this purpose, you can run a full machine check-up with Reimage Reimage Cleaner Intego or SpyHunter 5Combo Cleaner that will take only a few minutes of your time.

However, if you want to remove SpeedUpMyPC 2014 by yourself, you are welcome to. Just be sure that you have the skills for doing this. So, if you have enough self-confidence and no doubts are bothering you, you can continue with the following instructing steps that will show you how to clean both Windows and Mac operating systems.

You can delete the fake system tool from Windows with the help of these guidelines:

Terminate the annoying program from Mac OS X by completing the following steps:

Your opinion regarding SpeedUpMyPC 2014 Cancel reply

You can quickly scan the QR code with your mobile device and have SpeedUpMyPC 2014 manual removal instructions right in your pocket.