System Optimizer Pro review: a free tool that promotes the paid version of the program 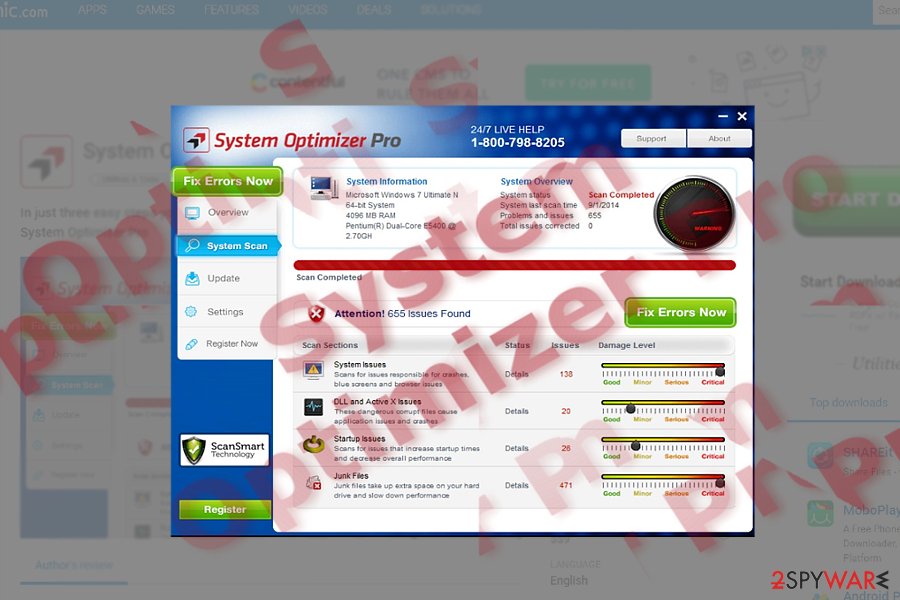 System Optimizer Pro by 383 Media Inc. is a PC optimization program that claims to clean computer and fix system and registry errors. However, security experts noticed negative features of this tool that puts it into the category of potentially unwanted programs (PUPs). Besides, computer users often mistake it with PC Optimizer Pro. The latter app is also known for causing troubles.

This free program also offers tech support. If users have some problems with a program, they can call 1-800-798-8205.All might seem fine and dandy, but soon the software reveals its nature. When you attempt to fix the found issues and problems, an additional window appears asking you to purchase the full version. By purchasing the full System Optimizer Pro version, you solve not the real issues but fake ones.

This is purely a marketing technique[1]. However, the software might make the system more vulnerable as it fails to optimize the system properly. In other words, there are only a few programs which might indeed boost the performance of the system. After all, the fewer questionable apps reside on the system, the better. Therefore, you should remove System Optimizer Pro.

The key feature of all questionable optimization tools is to persuade users that their operating systems are in need of technical assistance. Unfortunately, less advanced or senior users alerted with hundred of fake issues might indeed purchase the full edition of System Optimization Pro.

Experts from Hungary[2] do not recommend buying the full version of the program because it’s not only the waste of money, but you may easily reveal your banking information[3] to third-parties too.

The full version does nothing except that it eliminates fake messages. While this program does not behave maliciously, some cases of rogue security tools exhibit aggressive behavior. For instance, Windows Antivirus Helper,[4] even meddled with real security applications preventing them from functioning properly.

However, some users report that the program appeared on their computers out of nowhere and started displaying threatening system scan results. Indeed, the program might be installed in the software bundle. If it happens to you too, you should perform System Optimizer Pro removal using professional malware removal program, such as Reimage Reimage Cleaner Intego or Malwarebytes. 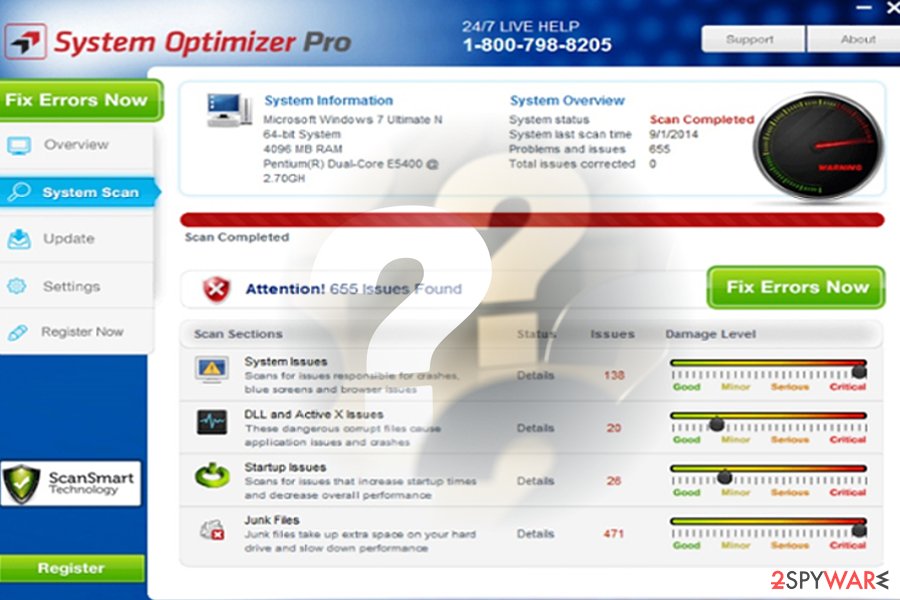 Users can download this dubious program intentionally and unintentionally. This application is promoted via:

Therefore, System Optimizer Pro hijack might occur if you download some freeware or shareware[5] using Quick/Recommended setup. Therefore, if you are surprised by software’s appearance, you should be more careful with the installation of free programs next time. Now it’s time to get rid of this tool.

This doubtful application may not only cause annoying ads during your browsing. It may also negatively affect your computer's performance by consuming lots of PC's resources. In order to avoid that, you should follow these simple steps and remove System Optimizer Pro from the system. Some users reported having difficulties uninstalling the PUP.

If you happen to be one of them, it is recommended to perform System Optimizer Pro removal in Safe Mode. Windows 7 users can enter the mode by tapping on F2 before Windows logo appears (before booting into the OS). Windows 10 users can do it in two ways.

In case you find any difficulties uninstalling the program, use malware elimination tools to eliminate the PUP completely. We recommend choosing Reimage Reimage Cleaner Intego, SpyHunter 5Combo Cleaner or Malwarebytes.

You can quickly scan the QR code with your mobile device and have System Optimizer Pro manual removal instructions right in your pocket.