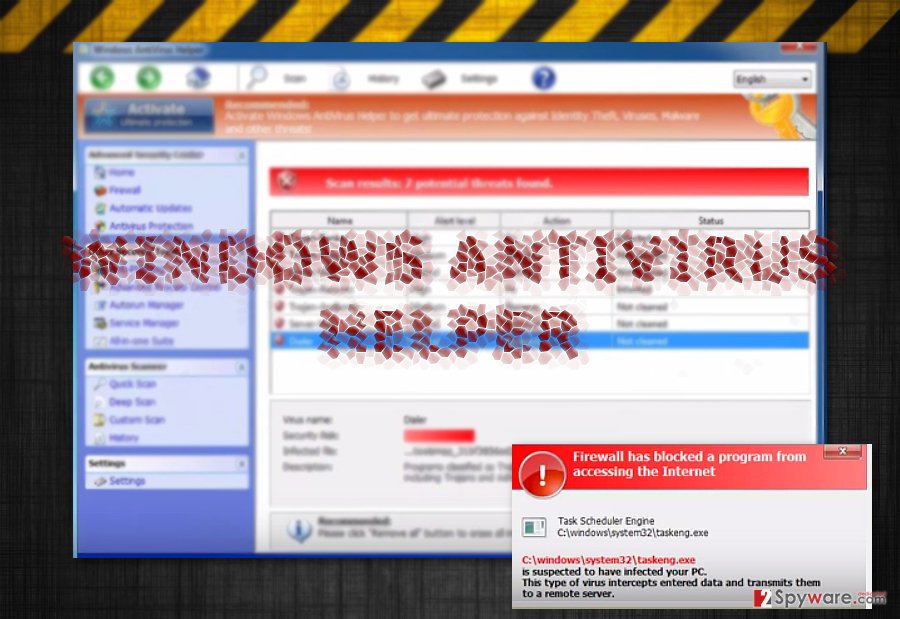 Windows AntiVirus Helper functions as a rogue cyber security tool[1] associated with Rogue.FakeVines family of malicious apps. It is presented as a utility which locates and eliminates all threats present on the system.

This specific program relies only on misleading techniques when seeking this aim. In order to trick people into opening their wallets, Windows AntiVirus Helper counterfeits notifications about a heavily infected operating system. Thus, alarmed by such fake messages, users may rush to purchase the full version of the software.

However, there is a catch: before you do so, you are asked to sign up and enter your credit card details.[2] Eventually, the services of this rogue antivirus tool will cost you $100.

You will also see the transaction and Windows Antivirus Helper phone number. The latter might be promoted in the app, though it may display different numbers.

In contrast to other rogue security applications, this software will directly interfere with the legitimate Windows applications and processes. It may even prevent Google Chrome, Internet Explorer, Mozilla Firefox or another browser from running. Naturally, it may also meddle with the launch process of genuine anti-virus utility.[3] Due to such activity, we highly recommend performing Windows Antivirus Helper removal. ReimageIntego or Malwarebytes will help you get rid of this application.

One of the key most annoying features of this malware is that it starts right after you log in to Windows. The scan only takes a couple of minutes during which you may be bothered with such warnings:

Firewall has blocked a program from accessing the Internet

c:\windows\system32\taskmanger.exe
is suspected to have infected your PC.
This type of virus intercepts entered data and transmits them
to a remote server.

Additionally, other fake notifications will bother you. Some of them try to frighten users that their operating system has been infected with trojans and other more elaborate malware threats:

Besides, antivirushelper.com has also been used to spread this PUP. As it can be expected it is filled with misleading phrases and logos that you should never take seriously.

In order to evade Windows Antivirus Helper hijack, bear in mind these tips: always check programs before downloading. Make sure you read users' reviews to know more about them. Also, despite how useful the app or the source looks, make sure you download it only after you select “Custom” or “Advanced” installation settings. Then, you need to remove all unnecessary add-ons. 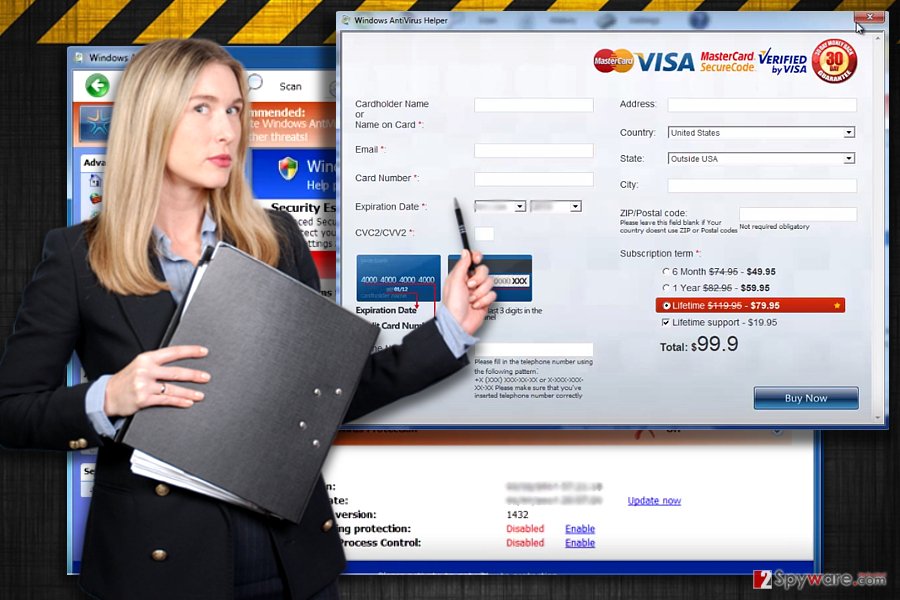 Windows Antivirus Helper aggressively promotes its services. However, contrary to its claims, it may even make your system more vulnerable to real viruses.

If order to bypass the processes and annoying behavior of the malware, you may restart the system in Safe Mode. You may also remove Windows AntiVirus Helper virus manually via the Control Panel. It is very likely that the tool may prevent you from doing it. The same applies if you decide to perform automatic Windows AntiVirus Helper removal. Below instructions will explain how to delete the tool in Safe Mode.

It is very likely that the tool may prevent you from doing it. The same applies if you decide to perform automatic Windows AntiVirus Helper removal. Below instructions will explain how to delete the tool in Safe Mode. UK users[4] should be especially vigilant.

Choose Safe Mode with Networking to access the system with the Internet connection. Then, you will be able to download real cybersecurity tool and delete Windows Antivirus Helper.

Guide which is presented above is supposed to help you remove Windows AntiVirus Helper from your computer. To recover your encrypted files, we recommend using a detailed guide prepared by 2-spyware.com security experts.

If your files are encrypted by Windows AntiVirus Helper, you can use several methods to restore them:

Finally, you should always think about the protection of crypto-ransomwares. In order to protect your computer from Windows AntiVirus Helper and other ransomwares, use a reputable anti-spyware, such as ReimageIntego, SpyHunter 5Combo Cleaner or Malwarebytes

You can quickly scan the QR code with your mobile device and have Windows AntiVirus Helper manual removal instructions right in your pocket.