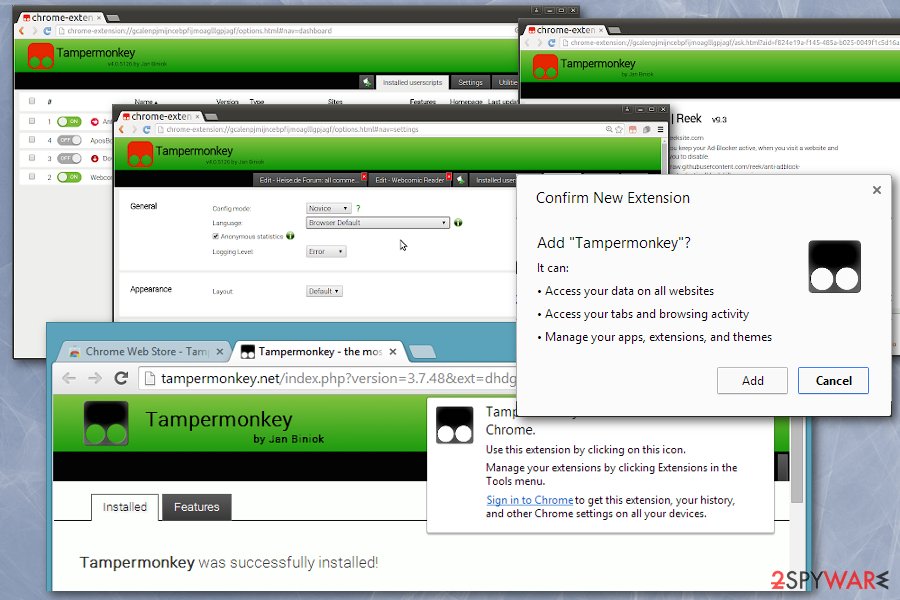 Tampermonkey is a userscript managing application that is usually downloaded intentionally for Chrome, MS Edge, Firefox, Safari, and Opera web browsers. The extension is widely popular, residing in more than 10 million users computers due to its useful functionality – it allows modification of certain visited website function modifications which would otherwise be unavailable.

Tampermonkey allows users to choose from more than 400,000 different JavaScript[1] scripts that each is used for different functions. For example, “Auto Close YouTube Ads” script allows the automatic closure of the ad as soon as the “Skip ad” option becomes available, while “Anti-Adblock Killer” prevents websites from blocking the feature. This is how Tampermonkey add-on can make the online experience of many users much more efficient – it provides many customization options.

However, like many browser extensions, Tampermonkey is not without the problems. First of all, while the application is itself safe, it might, potentially, load unsafe scripts from unknown sources. Loading outside scripts might be just as dangerous as downloading an executable from Torrent sites. Besides, some users complained about Tampermonkey removal and self-reinstallation problems.

While Tampermonkey is a useful app with plenty of customization options, it might sometimes not be safe. However, it all depends on how users use it, as loading malicious scripts without realizing it is also a possibility. Malicious scripts can abuse the vulnerabilities of the web browsers, installed programs, or the operating system. For that reason, malware[2] installation might be performed automatically, without user consent.

Most of such JavaScripts are embedded on hacked or malicious websites. Unfortunately, scripts for Tampermonkey might be hosted on malicious sites that users might download intentionally, thinking it is legitimate. Therefore, the reckless behavior can indeed lead to malware.

Please pay attention to the description of what Tampermonkey app can do:

Read and change all your data on the websites you visit

Modify data you copy and paste

Manage your apps, extensions, and themes

If you combine these permissions with a malicious script that you might have downloaded, the consequences might be devastating. 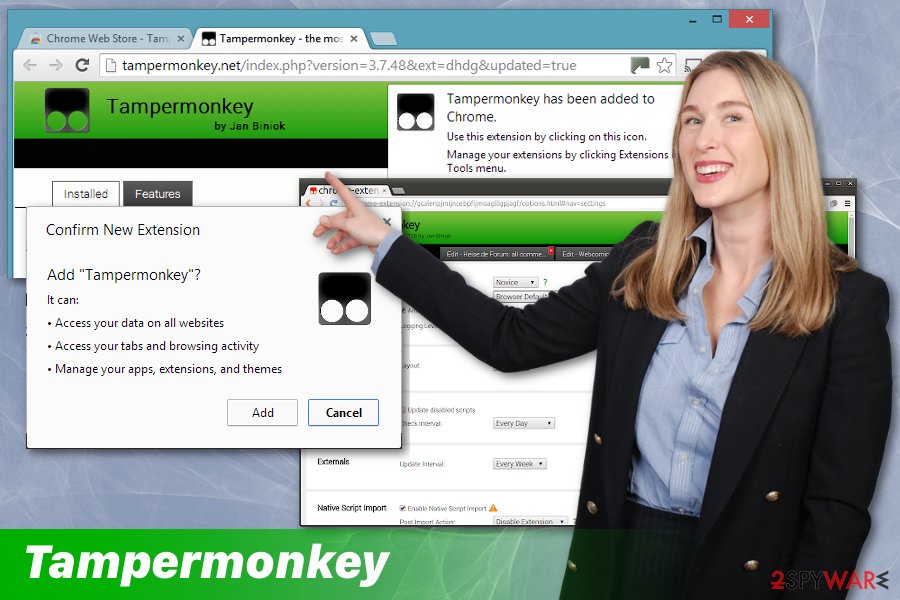 Tampermonkey is an add-on that helps users manage scripts for various sites. Unfortunately, not all of the downloaded scripts might be safe, resulting in suspicious app behavior

To make sure that your computer is safe, we recommend scanning it with anti-malware software like Reimage Reimage Cleaner Intego or SpyHunter 5Combo Cleaner, especially if you noticed strange browser behavior – redirects, excessive ads, extensions installed without your consent, or overall slowness of the computer operation.

Another problem that prompted users to call the extension “Tampermonkey virus” is its reinstallation problems. Several users claimed that even after getting rid of the application, it gets reinstalled as soon as the browser is restarted.[3] Some also stated that after such installation, they were unable to remove Tampermonkey, as the option was missing entirely.

To get rid of Tampermonkey, you should check our guidelines below. In the worst-case scenario, the reinstallation of the browser might be required.

Automatic (re)installation of browser extensions might not necessarily be related to the extensions themselves, but rather with installed potentially unwanted programs[4] on the machine. In most of the cases, such unwanted apps like adware come bundled with freeware or shareware.

These free programs are usually hosted on third-party sites. While there is nothing illegal about offering several applications via the installer, some of these optional components might be ad-sponsored and even malicious. Therefore, it is especially important to make sure the installation process of new applications is performed as carefully as possible. Here are some experts' tips[5] on the matter:

In some cases, Tampermonkey removal might be hindered by another malicious application that is installed on your machine – that is when the suspicious reinstallation cycle might be observed by users. In such a case, it is vital to locate and terminate all the PUPs and malware that might be hiding on your machine. 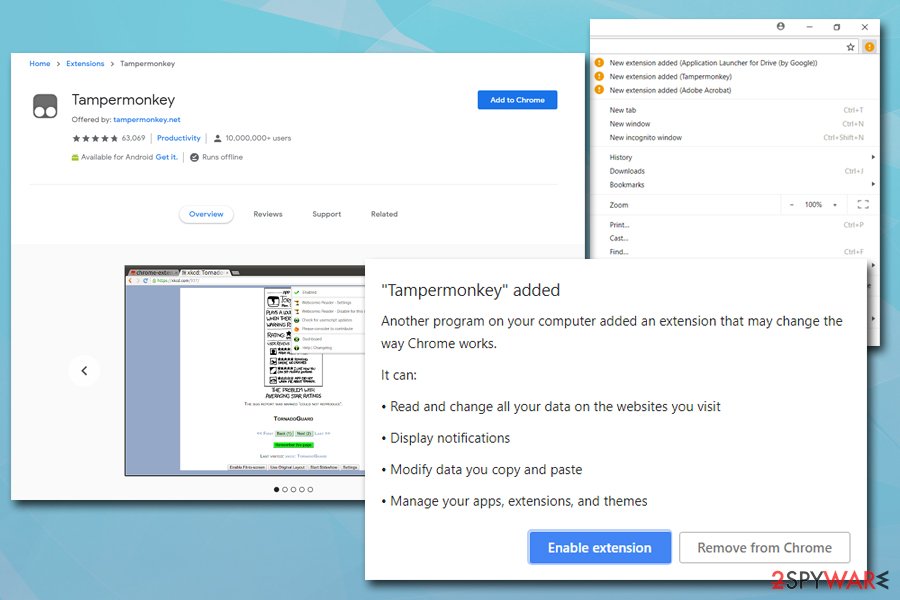 In some cases, users might install malicious scripts for Tampermonkey. This results in automatic reinstallation and removal problems of the app

You should first check the installed program list via the Programs and Features (Windows) or Applications (Mac) folders and uninstall everything suspicious. Then, make sure you reset each of the installed browsers – the action is mandatory to prevent altered settings from returning the unwanted activity of the PUP. Finally, you should scan your machine with anti-malware software to make sure your computer is secure.

In some cases, all these actions might be not enough to remove Tampermonkey. The underlying reason might be modified registry or other vital operating system parts. In such a case, experts recommend reinstalling the browser altogether and then performing a repeated security scan.

You can eliminate Tampermonkey from the device with this guide:

Once these steps are finished, Tampermonkey should be removed from your Microsoft Edge browser.

Get rid of Tampermonkey from Mozilla Firefox (FF)

Don't forget to clean the browser after Tampermonkey uninstallation:

Change settings to default on your Chrome, to make sure it normally works:

Your opinion regarding Tampermonkey Cancel reply

You can quickly scan the QR code with your mobile device and have Tampermonkey manual removal instructions right in your pocket.