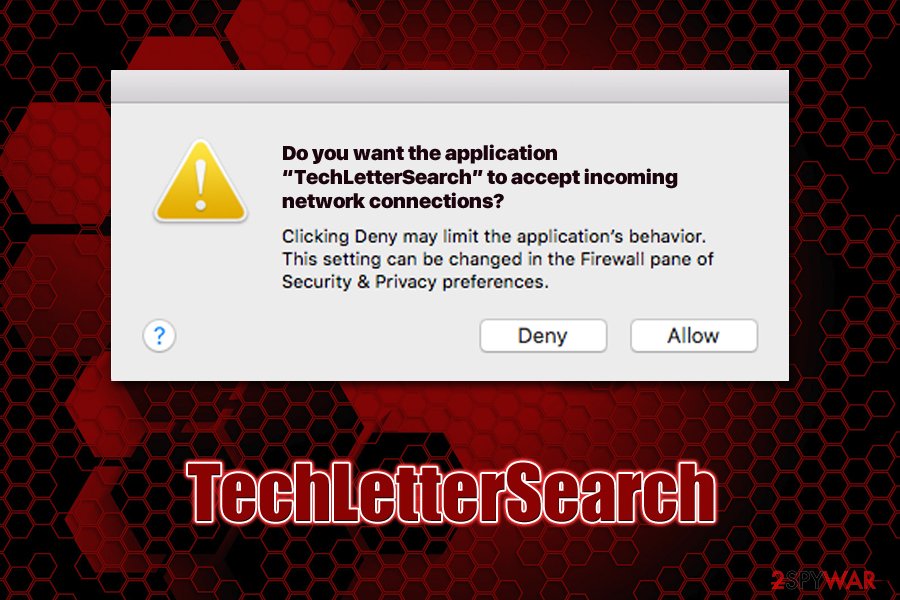 TechLetterSearch is an adware program that users may find on their Mac computers. In most cases, this borderline malware app is distributed via malicious websites that show fake Flash Player update prompts, or might be found bundled with freeware from third-party websites. As a result, users are rarely aware of the PUA's entry, and only start noticing its existence after they notice Mac prompts and suspicious TechLetterSearch ads.

Additionally, TechLetterSearch virus will engage in various background behavior that is not immediately visible. For example, the adware will try to establish new network connections with predetermined sites – this is when Mac will warn users with the following notification:

Do you want the application “TechLetterSearch” to accept incoming network connections? Clicking Deny may limit the application's behavior. This setting can be changed in the Firewall pane of Security & Privacy preferences.

Note that this prompt should never be ignored, and you should never allow TechLetterSearch to connect to its network, as it can result in various unforeseen consequences, including additional software installation, which might not be safe. However, users reported that the pop-up warning shows up several times a day, and they do not know to remove these TechLetterSearch prompts, as they disturb normal computer operation.

Another invisible activity that TechLetterSearch will engage in is data tracking. Adware applications are designed to produce various types of ads to users, and they are usually delivered with the help of a virtual layer, redirects, sponsored links, etc. The PUP is capable of doing so by altering the web browser settings, and sometimes establishing its own profile for persistence – the latter can make a regular TechLetterSearch removal and almost impossible task. 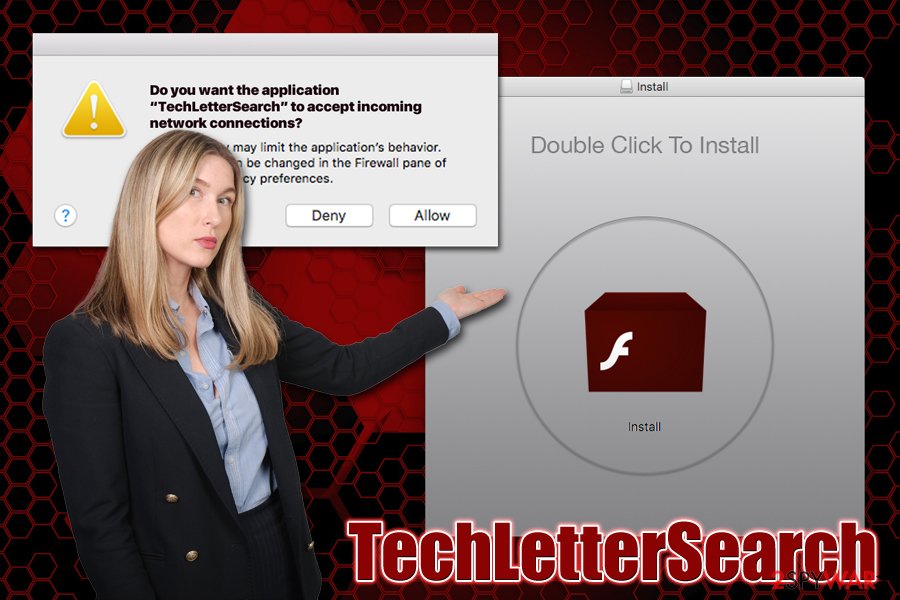 The TechLetterSearch data collection practices are performed with the help of tracking technologies such as web beacons,[1] cookies, pixels, JavaScript, and other invisible components. Typically, the collected information includes:

In some cases, however, the potentially unwanted app like TechLetterSearch might grant itself elevated permissions during the installation, which would allow it to read sensitive data on all websites, such as credit card details.

Therefore, while TechLetterSearch might seem like a nuisance that keeps showing ads on all sites and the cause of occasional system warnings, it can be much more than that. Keep in mind that it is spread with the help of fake update prompts or scam sites, it might be able to read sensitive information on all the sites that you visit, and also may promote bogus software via advertisements.

Therefore, do not hesitate to uninstall TechLetterSearch as soon as you detect its prescience on your macOS. You can either do it anti-malware tools like SpyHunter 5Combo Cleaner or refer to our manual removal guide below. Tip: if you want to get rid of useless files on your Mac and speed it up, we encourage using Reimage Reimage Cleaner Intego.

Fake Flash Player updates have been around for years now, and users are still falling for a very old trick. Flash is generally outdated and inefficient software will be terminated by its developer Adobe,[2] as it has too many security flaws that can be abused by cybercriminals and is also often used in scam schemes online. Besides, all modern web browsers have its functionality embedded, so there is no need for an actual plugin to be installed in the first place. However, because the software was so prevalent for many years, users still think it is needed, and some don't even know if they have it installed on their system.

A simple social engineering trick does wonders for cybercriminals, however, as they merely say that they need to update Flash in order to allegedly view website's contents, or that the update is simply due. However, what users are downloading and installing is not a real Flash, but an adware app that can cause a wide array of web browser disturbances, such as redirects, pop-up ads, and similar. In some cases, users also install scareware[3] like Advanced Mac Cleaner, as well as malware (Shlayer Trojan) in the same way. 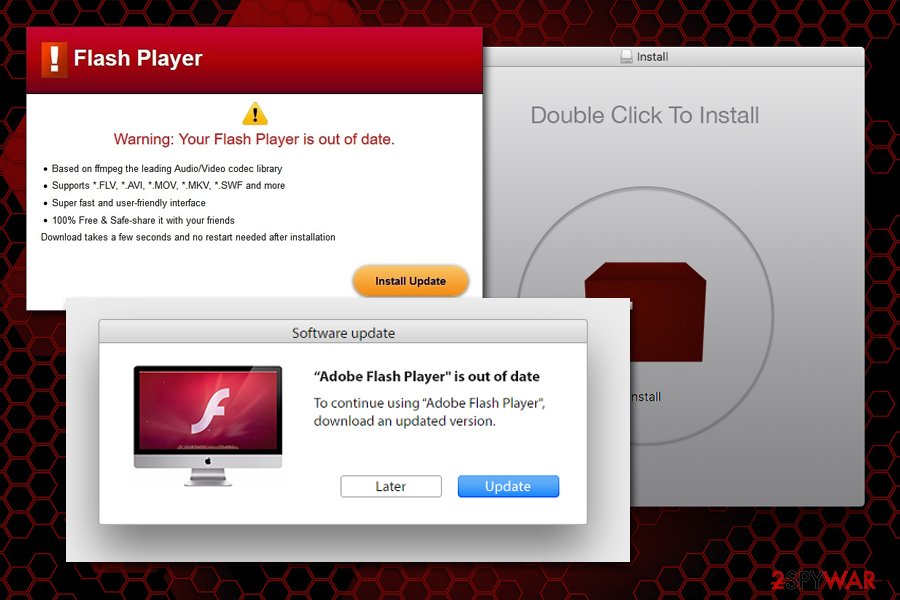 Therefore, it is best to uninstall Adobe Flash Player altogether, as it is generally useless software for a regular user. If you insist on having it installed, you should always visit the official Adobe site and get it from there. In other words, never believe random notifications, such as update prompts and virus infection warnings that come from within the browser.

Additionally, experts[4] highly advise choosing official software download sources, such as App Store, Amazon, Google Web Store, and so on – these stores have millions of apps combined, so there is plenty to choose from. If, however, you decide to stick to third-parties, watch out of optional components during the installation – pick Advanced/Custom setting, and get rid of all the offers on the way.

Many computer users still believe that Macs cannot fall victim to malware, as Apple implements various built-in security measures that stop much of computer parasites. While it is technically true, there are various ways of malicious software of entering Macs, and TechLetterSearch virus is a perfect example.

Spread with the help of fake updates, it tricks users into letting itself in, and then performs a variety of changes and drops multiple files on the system. For that reason, users may struggle with TechLetterSearch removal. If you want to terminate this potentially unwanted application manually, you should check the following folders on your macOS:

Additionally, there you should get rid of TechLetterSearch profile (if present):

However, if you do not want to bother with manual elimination, you can easily remove TechLetterSearch automatically with the help of anti-malware software – all you have to do is install it and then perform a full system scan. Note: do not forget to update definitions of security software before proceeding.

To get rid of adware apps on macOS, move it to Trash as follows:

Get rid of TechLetterSearch from Google Chrome

Remember to reset Google Chrome after you get rid of TechLetterSearch to ensure its ads do not return:

Your opinion regarding TechLetterSearch Cancel reply

You can quickly scan the QR code with your mobile device and have TechLetterSearch manual removal instructions right in your pocket.