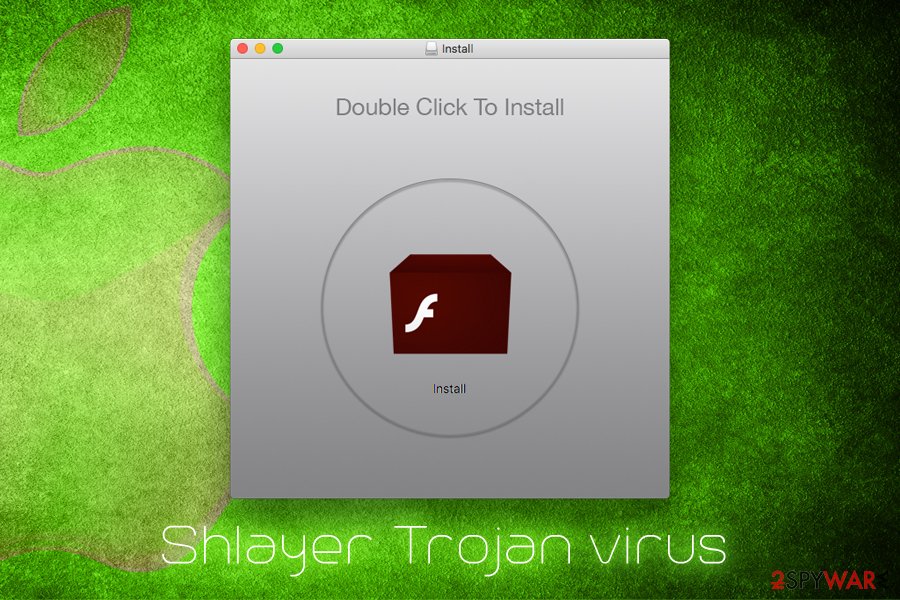 Shlayer Trojan virus is malicious software that targets Mac users and is typically installed via BitTorrent file sharing sites or fake Adobe Flash updates. Also known as OSX/Shlayer or Crossrider, the threat is especially dangerous because it establishes configuration profiles which increase the persistence and users struggle when trying to get rid of it. The most recent variant of the virus that spreads via rogue Flash Player updates focuses on disabling the macOS Gatekeeper security agent.[1] The discovery was made by TAU researchers, and according to them, versions from 10.10.5 to 10/12/.3 can get affected by this updated version. The malicious installer uses DMG, .pkg, .iso, .or zip file formats.

The primary purpose of Shlayer Trojan virus is to download and install various potentially unwanted programs, such as Advanced Mac Cleaner or Mac Cleanup Pro. Initially, Apple does not allow automatic installations of apps that do not come from Apple store, but Shlayer Trojan enables such functionality and macOS gets filled with bloatware that degrade the operation of the device. It is also known that the malware changes Google Chrome's or other browser's search engine to Chumsearch.com.[2]

Shlayer Trojan virus is one of the most well-known malware that is designed for Macs. Users typically wonder around BitTorrent sites and download a crack for legitimate software. It is not surprising that such illegal tools are often malicious, and most of the security applications will detect the file as malware, regardless of its functionality.

Alternatively, users might get infected when they get redirected to a malicious site that prompts them to update Adobe Flash. When Shlayer Trojan virus is launched, it will display two installation methods: Express (recommended) or Custom Installation (expert). If the latter is chosen, users can see what is actually being installed:

Shlayer Trojan virus installer will install the following onto the macOS:

Once installed, Shlayer Trojan virus will perform the scan using Advanced Mac Cleaner and activate Siri's voice that says that the computer has multiple problems (which is obviously a lie). As typical to scareware, it will show numerous issues and, users who want to fix them need to pay a hefty $107 for it. As evident, users should ignore these warning and remove Shlayer Trojan virus together with the unwanted programs that it installed.

However, even after Shlayer Trojan virus removal, users will not be able to get rid of all the traces left by PUPs because it sets up a malicious configuration profile that lingers until the profile is deleted. We explain below how to accomplish that. Until then, users will still see Chumsearch.com as their main page on Safari and Chrome. 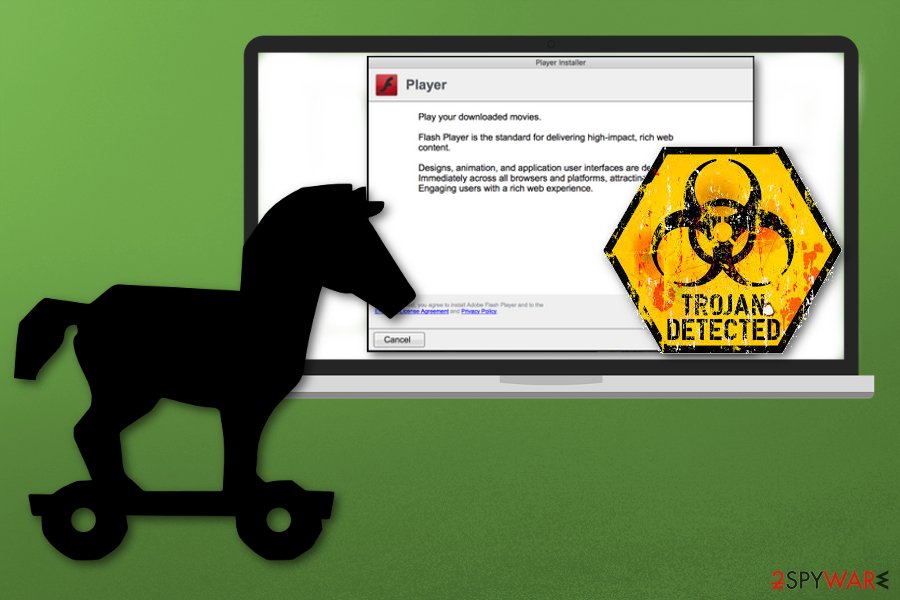 As researchers reported, samples discovered during their analysis affects most of the newest versions:

Samples discovered by TAU have been seen to affect versions of macOS from 10.10.5 to 10.14.3. To this point, all discovered samples of this malware have targeted only macOS. The malware employs multiple levels of obfuscation and is capable of privilege escalation.

Attackers use the legitimate code signing through Apple's developer program and that allows them to bypass MacOS's restrictions and warnings that are enforced using gatekeeper. However, Shlayer virus still uses shell scripts to deploy secondary payloads, run commands and execute scripts.

The final payload collects information from the system, creates a unique ID for the infected device and downloads other malware from the remote server. That secondary malware payload is an .app executable, as TAU report writes:

Once the malware has elevated to root privileges, it attempts to download additional software (observed to be adware in the analyzed samples) and disables Gatekeeper for the downloaded software using spctl. This allows the whitelisted software to run without user intervention even if the system is set to disallow unknown applications downloaded from the internet.

Shlayer Trojan virus can read and transmit the data you type while the malware is installed. It means that your name, passwords, and even banking details are at risk of the exposure. In addition, users will suffer from constant ads and redirects during their web browsing.

To detect the unwanted software on your device, check your applications folder. If you see any apps you never installed or the ones mentioned above – you should be concerned. The best way to protect your Mac is by employing reputable security software. We recommend using Reimage Reimage Cleaner Intego or SpyHunter 5Combo Cleaner, although you can use any other trusted AV engine that would detect malicious processes automatically. 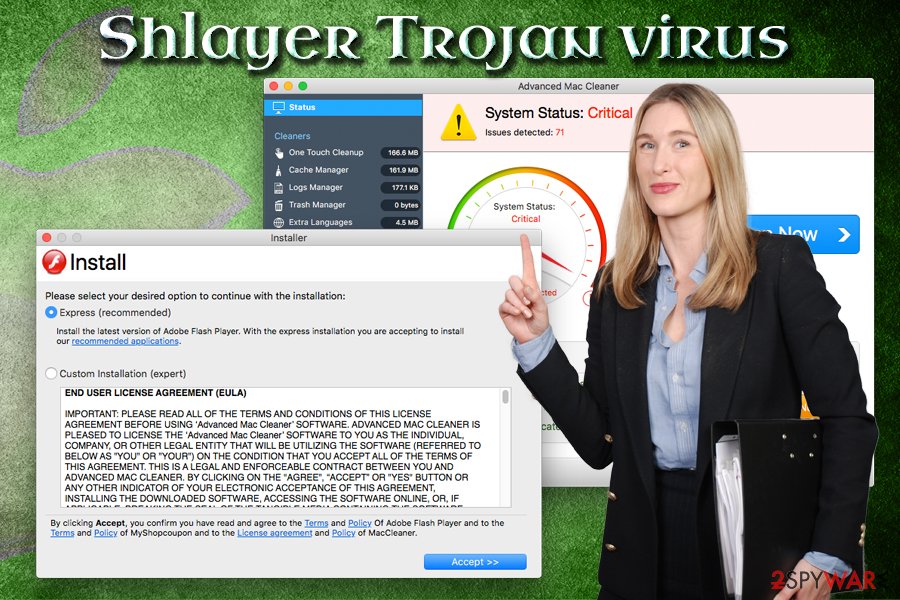 Adobe Flash is an outdated platform and is barely used anymore, as it will be shut down in 2020.[3] The player is known to have multiple security flaws,[4] and have been abused by cybercriminals for years (fake updates). Besides, most modern browsers have the feature already built-in, so there is no need to download Adobe Flash.

However, if you ever find the need for Adobe Flash, download it from the official website. Additionally, set it to click-to-run mode, so that it would not launch automatically on dangerous sites.

As it is typical of malware, it is widely spread on BitTorrent sites. Therefore, experts[5] recommend staying away from them. However, if you will be torrenting, keep in mind the following:

Remove Shlayer Trojan virus with the help of these instructions

The first thing you have to do is to remove Shlayer Trojan virus and the applications that it installed. If you are savvy enough, you can proceed simply go Application folder and look for apps mentioned above. However, be aware that OSX/Shlayer is designed to download and install unknown programs automatically. Therefore, we recommend users using profession software that could take care of Shlayer Trojan virus removal automatically.

Once the unwanted applications are removed, you will have to delete the malicious profile that Shlayer Trojan created. Please follow these steps:

Finally, we recommend resetting each of the installed browsers as described below.

To remove Shlayer Trojan virus from your Mac, follow these steps:

To make sure all the settings are reset on MS Edge, follow these instructions:

Once these steps are finished, Shlayer Trojan should be removed from your Microsoft Edge browser.

Get rid of Shlayer Trojan from Google Chrome

You need to reset Safari by performing these steps:

You can quickly scan the QR code with your mobile device and have Shlayer Trojan virus manual removal instructions right in your pocket.