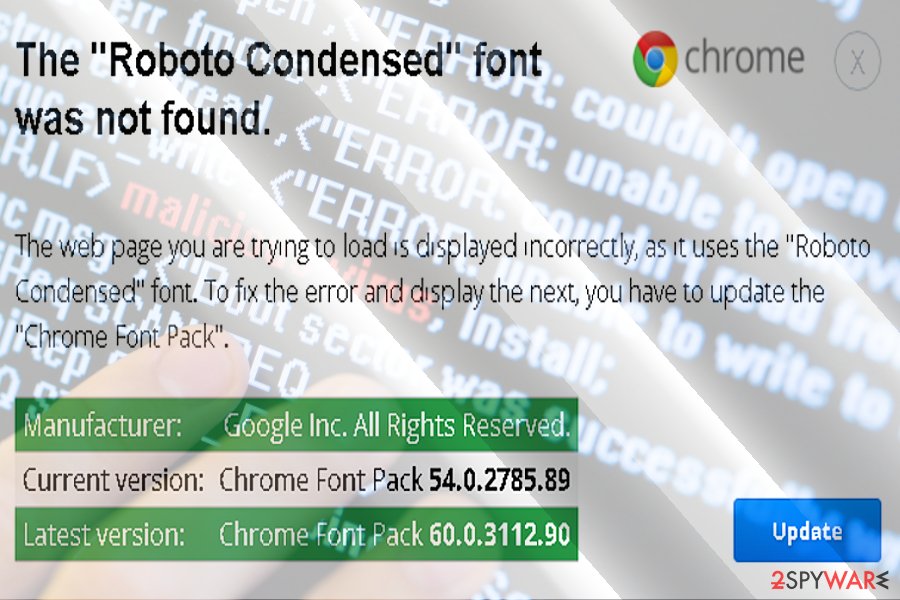 “The Roboto Condensed font was not found” is a deceptive error message that might be delivered by a malicious website. The adware, which is responsible for redirecting users to this site, is usually installed in software packages and attack Chrome and Firefox users. However, Internet Explorer and Microsoft Edge users might encounter it as well.

The “The Roboto Condensed font was not found” virus is similar to “the HoeflerText was not found” and “the ArialText Font Was Not Found” – malspam campaigns designed to deliver Lukitus[1] and Spora ransomware. This example of malware was noticed spreading XMRig CoinMiner, Nymaim[2] or Ursnif malware. However, in October 2017, researchers spotted pushing crapware too.

The very campaign emerged when you get misguides to an infected domain, which converts the content of a web page and into an unreadable collection of characters. Then, the notification appears indicating that “The Roboto Condensed font was not found.”[3]

Unfortunately, the malware developers made a good job counterfeiting the logo and entire message to make it look like a realistic notification.

Interestingly, Internet users will not see a scrambled page, but instead the very pup and additional pop-ups loading in new tabs. You should remove “The Roboto Condensed font was not found” virus right away. Reimage Reimage Cleaner Intego or Malwarebytes will help you do that faster.

It might be amusing if not frustrating to think that cyber villains expect to succeed in their plans fishing for gullible users with the same technique. However, as the case of Facebook video and message viruses reveal, the campaign might prove to be highly successful.

If a user who has not encounter malware may indeed fall for into the trap as the message is professionally forged. If you dare to install fontpackup.exe, you might see the aftermath of dealing with Nymaim malware or cryptominer. You should perform “the Roboto Condensed font was not found” removal even if you did not download the offered payload.

On October 2017, malware researchers announced that malware started spreading crapware and InstallCapital adware. The operation method remains the same. If users agree to install “update” from a malicious website, a new malware is installed on the computers.

Once adware bundle is executed on the computer, it connects to a remote server. When the connection is established, it downloads an encrypted configuration file which includes a bunch of information. However, it might differ from one victim to another. Therefore, the configuration files might include different URLs, command line argument and various software EULAs based on affected Windows OS version or computer’s geographic location.

During the installation of InstallCapital’s bundle, users are offered to choose between recommended Express Install and Advanced Install. The pre-selected Express install offers to download “recommended additions” such as including System Healer, DNS Locker, Search Awesome and others. However, if you choose Advanced Install hoping to reject installation of these entries, you are wrong. These ad-supported programs will be still installed automatically.

Once this terrible package is installed, user’s DNS settings might be changed in order to display aggressive ads and to mine virtual currency. However, installation of this fake “The Roboto Condensed font was not found” update might lead to the installation of more dangerous programs, such as Trojans or keyloggers. 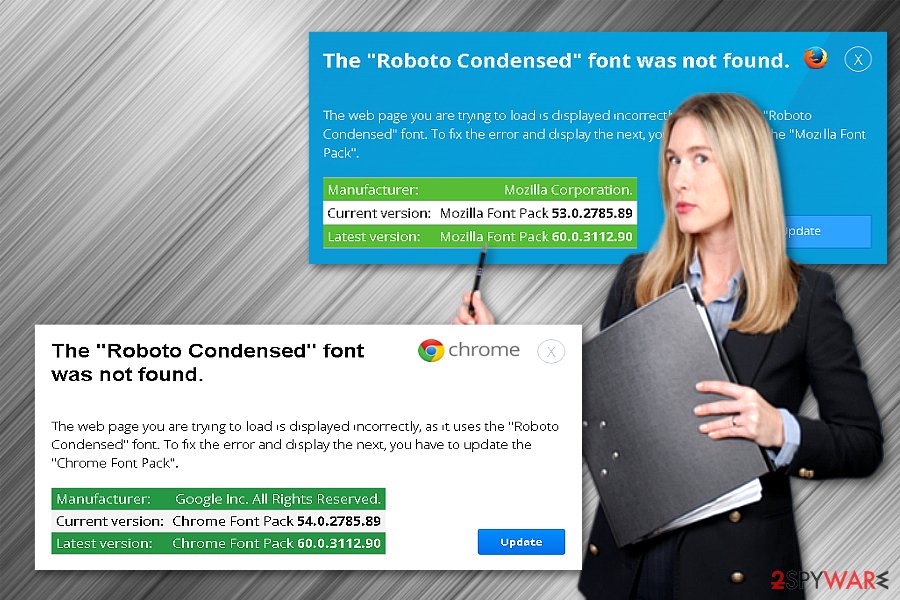 As discussed above, you are likely to encounter the malware if you wander away to an infected site and activate the malicious script. Therefore, mere vigilance will not be sufficient in battling the malware. Download and install malware elimination tools.

On the other hand, it still requires partial users’ participation to conduct the attack. Note that neither of Chrome or Firefox updates do not appear in random sites or when you download a shady file from torrent sharing or movie streaming site. Securing or browser with a tool and paying attention to downloadable content will help you lower the risk of “The Roboto Condensed font was not found” hijack.

You can get rid of it by resetting the browser. In order to complete “the Roboto Condensed font was not found” removal, you may scan the browser with a security tool. On the final note, all users, whether you reside in Russia [4] or the UK, should be wary of this browser threat.

To remove “The Roboto Condensed font was not found” virus, follow these steps:

Delete “The Roboto Condensed font was not found” from Windows systems

Once these steps are finished, “The Roboto Condensed font was not found” should be removed from your Microsoft Edge browser.

Exit the page containing “The Roboto Condensed font was not found” notification and clean the browser.

Remove “The Roboto Condensed font was not found” from Google Chrome

Reset the browser to eliminate all web objects and scripts of “The Roboto Condensed font was not found” malware.

Delete “The Roboto Condensed font was not found” from Safari

You can quickly scan the QR code with your mobile device and have “The Roboto Condensed font was not found” virus manual removal instructions right in your pocket.