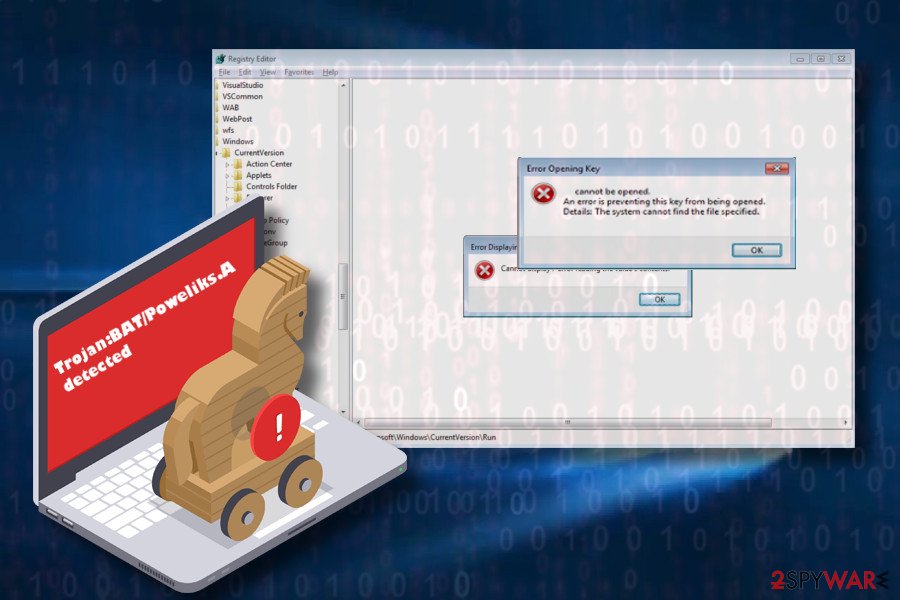 Trojan:BAT/Poweliks.A is a name of a Trojan[1] horse returned to PC users by an AV-engine. This name can be used interchangeably with the following: Poweliks Trojan, Trojan.Poweliks, Trojan.Poweliks!gm, SONAR.Poweliks!gen1 and similar. The virus stands out from the others since it's is not detectable in the form of a file.[2] It resides in Windows Registry and relies on Watchdog maintenance.

First detected in 2014, the malware mutated in many ways, but most of AV engines are still struggling to detect and immunize it successfully. Trojan:BAT/Poweliks.A malware does not have related files. That's why it's known as Fileless Trojan. Once executed, the malware uses various registry tricks, to name but a few:

In short, specialists find it difficult to remove Trojan:BAT/Poweliks.A Trojan due to the intricate performance mechanism it uses. Once the Powerliks gets inside, its payload decrypts targeted values, runs PowerShell scripts to take control over Watchdog process and misuses rundll32.exe file to infect Windows Registry.

Trojan is a malicious cyber infection that can cause serious problems. They are often used for the distribution of ransomware, spyware, and other malware. Thus, NoVirus.uk[3] team urge people to remove Trojan:BAT/Poweliks.A without a delay using ReimageIntego, SpyHunter 5Combo Cleaner or Malwarebytes.

Nevertheless, this trojan is not the most dangerous infection in the wilds. It's a tool employed by hackers who seek to generate pay-per-fraud activities to increase income from advertising. It is developed in a way to display keyword-based ads. It initiates a fake search by typing in default keywords and the browses for the required URLs. The minimum ads the

Trojan:BAT/Poweliks.A Trojan is requested to load is 3,000 by default, though not a single one will be revealed to the user of the infected PC. However, their content is not being investigated, so there's a high risk of getting infected with ransomware, spyware, keylogger or another severe cyber infection via trojanized invisible ads. 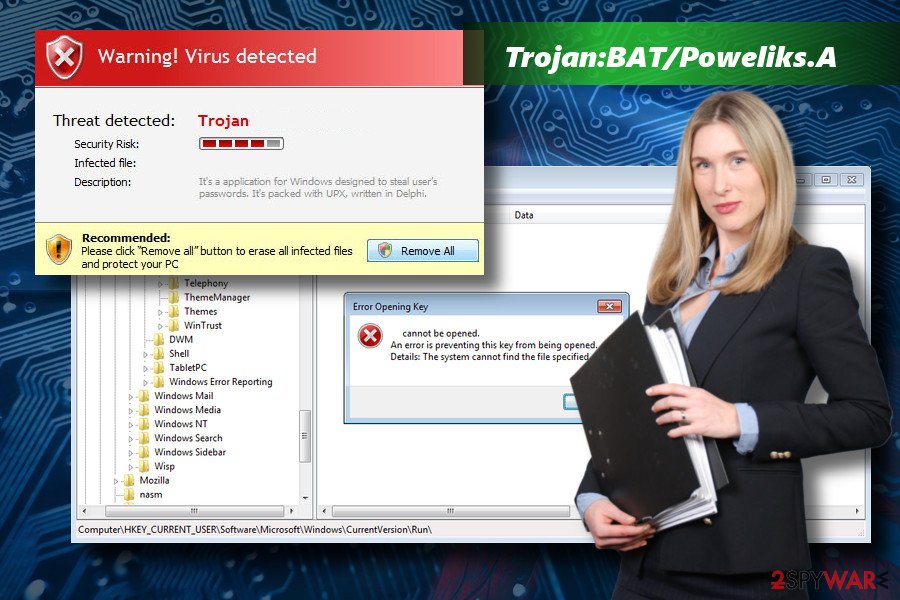 Trojan:BAT/Poweliks.A is a Trojan that is used by hackers to initiate click-fraud activities. It can generate malicious ads and initiate fraud clicks on them, thus leading to virus infection

Spam email allows Trojan to circulate on the web since 2014

According to cyber security experts, the file-less Trojan is most frequently distributed via malicious spam email attachments. Typically, they are disclosed in the form of Doc file from a shipping company USPS. It claims to contain package-related information.[4]

In this case, the only way to secure your system from infection is to report such an email as spam and remove it asap. Keep in mind that legitimate companies are not distributing suspicious-looking emails with attachments unless the client is informed about that in advance.

Besides, the virus can use rogue software updates or infected ads to get installed on a target system. Watch out for prompts to update FLV Player, Google Chrome, Flash Player, Java, and similar software.

Remove Trojan:BAT/Poweliks.A from the system and restore Windows Registry easily

Tech-savvy people may find it easy to remove Trojan:BAT/Poweliks.A virus manually at first, but the process is more complicated than it initially might seem. The process requires a careful termination of multiple processes, the removal of the virus, and a restoration of Windows Registry entries.

To initiate Trojan:BAT/Poweliks.A removal successfully, designate this task to a professional anti-virus program, such as ReimageIntego or SpyHunter 5Combo Cleaner. The first program recommended performs as a robust optimization tool. It contains a full database of Windows system's files and is capable of fixing Windows Registry. Thus, we would strongly recommend relying on Reimage.

WatchDog process can block your antivirus program completely. If you cannot run the program that is currently installed on your PC, you should follow this tutorial to boot the system into secure environment.

If the previous method did not work, try to delete Poweliks this way:

Finally, you should always think about the protection of crypto-ransomwares. In order to protect your computer from Trojan:BAT/Poweliks.A and other ransomwares, use a reputable anti-spyware, such as ReimageIntego, SpyHunter 5Combo Cleaner or Malwarebytes

Your opinion regarding Trojan:BAT/Poweliks.A Cancel reply

You can quickly scan the QR code with your mobile device and have Trojan:BAT/Poweliks.A manual removal instructions right in your pocket.