Trojan:vbs/mutuodo.a is a malicious Trojan horse related to PriceFountain adware 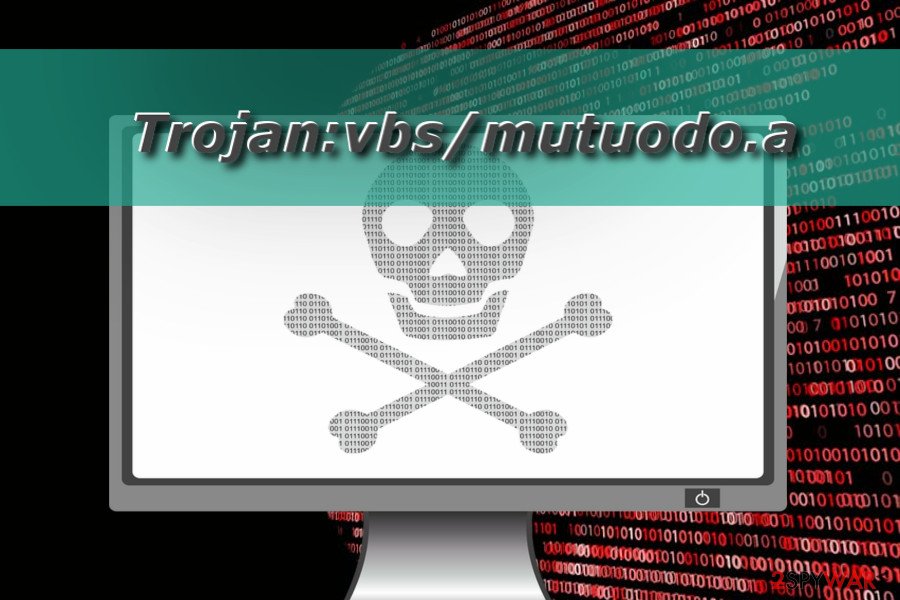 Trojan:vbs/mutuodo.a is a malicious file that is recognized as a Trojan horse[1] by most of the reputable AV-Engines. Windows Defender, Symantec, BitDefender, and other powerful security utilities name it Mutuodo Trojan or Mutuodo virus. It's a hazardous cyber infection, which is related to Win32/Prifou family of Trojans and PriceFountain adware.

Mutuodo Trojan is extremely dangerous. Cybersecurity experts from lesvirus.fr[2] initiated an in-depth analysis of its capabilities. According to them, the PriceFountain, an infamous adware program, might be infected with Mutuodo virus and once installed run Win32/Prifou.exe, wscript.exe, UpdateTask.exe, and other malicious scrips.

Upon successful infiltration, the Mutuodo Trojan virus attempts to root deeply into the operating system. It creates new registry entries and may try to modify the existent ones. These are a few Mutuodo virus related registry entries:

All these changes are initiated to set PriceFountain value. This application is known for displaying intrusive online advertisements within web browsers, track people's web browsing activities, and initiate other intrusive activities without authorization.

Nevertheless, mutuodo trojan along with PriceFountain or any other PUP might turn out to be extremely malicious. Recently, several people reported[3] that the infiltration of this Trojan ended up with a total system's hijack since the Trojan managed to compromise Microsoft account's password. It can open a backdoor to other malicious infections, such as Spyware, Worm or even Ransomware.

To protect your PC from damage, remove Trojan:vbs/mutuodo.a virus from the system. Keep in mind that it's not enough to delete PriceFountain or other PUPs related to the Trojan. It's a must to stop all malicious processes and immunize the Trojan itself. 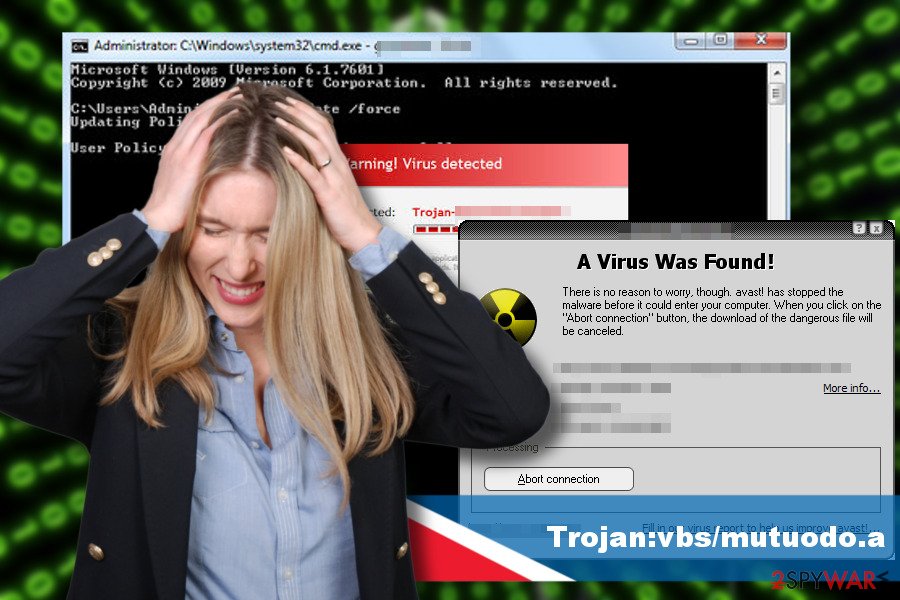 Trojan:vbs/mutuodo.a is a malicious Trojan horse that infects the system with adware-type programs, but can open backdoor to more dangerous cyber infections. Immediate removal required.

Although Trojans, unlike other cyber infections, do not reproduce by infecting other system's files nor do they self-replicate, they seek to open the backdoor on the targeted system and this way give the malicious user access to the system, exposing confidential or personal data to the risk of being leaked.

Thus, an immediate Mutuodo is a must. Otherwise, the Trojan can cause irreversible damage to the system and the data stored on it.

The name Trojan horse has been given to this infection not without reason. Relating the name with the history of Troy implies that the Trojan as a virus refers to some program or file that does not look suspicious from the initial inspection. However, once it gets into the system, it initiates malicious activities and can be extremely dangerous.

While a reputable anti-virus might help to evade Trojan infections, new Trojans may not be recognized as threats. Outdated virus database may also be the reason why a malicious program bypassed the protection.

Trojan horses are usually distributed as hidden components of mini-games or torrent files. In many cases, they spread as stand-alone installers. Hackers may try to spread them in malicious spam email attachments, fake software updates, and similar means. Thus, make sure to keep your antivirus updated and avoid interference with suspicious content online.

Mutuodo removal is a complicated process, which has to be initiated in phases. First of all, Trojan-related processes have to be disabled, and the main executable file immunized. Subsequently, the related components and corrupted Windoęws Registry entries have to be eliminated.

To remove Mutuodo Trojan from the system entirely, it's a must to use a professional anti-malware program. In fact, there's no other way to get rid of this infection except to get rid of it using ReimageIntego, SpyHunter 5Combo Cleaner, Malwarebytes or similar anti-malware tool.
Manual removal is not only impossible, but an attempt to eliminate malicious files can cause even more damage to the system.

If Mutuodo virus blocks the anti-virus and you cannot launch it or download another security tool, follow the instructions provided below to boot the system into Safe Mode with Networking:

If you cannot get rid of a Trojan horse because it blocks your security tool, try to launch if after booting the system into Safe Mode with Networking:

If the previous method did not help to get rid of Trojan:vbs/mutuodo.a virus, try these steps:

Finally, you should always think about the protection of crypto-ransomwares. In order to protect your computer from Trojan:vbs/mutuodo.a and other ransomwares, use a reputable anti-spyware, such as ReimageIntego, SpyHunter 5Combo Cleaner or Malwarebytes

Your opinion regarding Trojan:vbs/mutuodo.a Cancel reply

You can quickly scan the QR code with your mobile device and have Trojan:vbs/mutuodo.a manual removal instructions right in your pocket.