Tumblr virus is the attack during which malicious actors create fake accounts to send messages with malicious content.

Tumblr virus is the type of malware affecting users who are using this service. This term has been used to describe various scams, pop-up redirects, and even more severe malware campaigns. Malicious actors are using different tactics, e.g. social engineering or even fake messages to swindle personal information to misuse it in further crimes. Since this network has millions of users from all over the world, and the platform is filled with various content, it is not hard to run into malicious or at least questionable link leading to the attack.

The more popular platform is, the more attractive for scammers it becomes. There are numerous types of Tumblr malware targeting separate accounts and aiming to steal personal information or infect the machine and gather details from the PC directly. In the article, we discuss all possible versions of Tumblr virus that can be delivered via the blogging platform.

Tumblr virus can include different campaigns because malicious actors typically aim for different goals. Aggressive phishing campaigns, saying that the account will be deactivated, target people who are actively using this platform for blogging. Scammers are either willing to steal users' credentials or even scare victims into paying a ransom. Unfortunately, such tactics work pretty well since people get scared.

Beware that Tumblr virus can also bring malware to the system. It is done with the help of spam misusing the name of this microblogging community. If you received an email asking you to download the attachment, you should scan it before downloading the file to the system because it can easily trigger the automatic installation of some rogue tool. These scams can even use compromised accounts to set up legitimate-looking pages and blogs.

You can run into Tumblr virus while visiting adult-related content, e.g. videos, or webpages with external malicious links. If you, out of nowhere, were asked to visit some Tumblr link to “see something interesting,” make sure you ignore this suggestion as there is almost 100 percent chance that you will be redirected to the dangerous site seeking to infect your system with Mac or Windows virus. 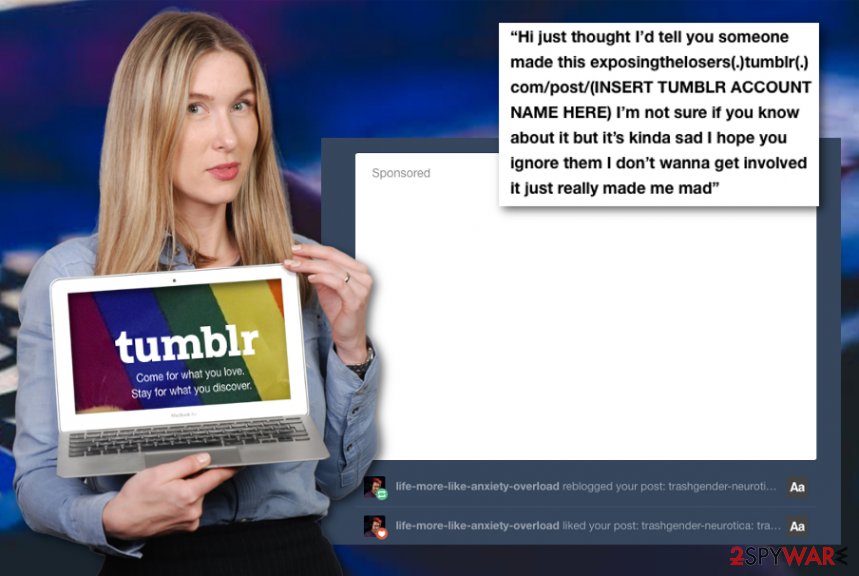 Tumblr virus is the threat that tricks people into revealing their personal details to criminals or info-gathering bots.

Finally, Tumblr virus can also be used for data tracking that involves gathering users' details about online activities and preferences, for example:

As a result, people hiding behind Tumblr virus accumulate numerous amounts of sensitive information and sell it or use it in further crimes. They can easily set up personalized pop-up ads and banners, asking victims to take their part and win a specific prize or get some benefit in other way. However, this is how to whole malicious technique goes further and leads victims to malware.

Tumblr virus can be used by many different actors that aim to trick people into installing bogus software or visiting third-party pages. These are the more severe variants known to spread around:

Tumblr reblogging scams are using chain letter tactics.[1] In these scam campaigns, cybercriminals are expecting people to fall for the fake warning messages like “Your account will be deleted if you do not reblog this” or “Your account will be reactivated if you do not reblog”. These scams are typically spreading via emails and have become fairly common, in these cases.

Typically, such hoaxes redirect their victims to other pages, fake donation pages or foreign ad-supported websites where people can unwillingly get infected with unwanted programs or even malware. These particular scams can also target corporate accounts, so make sure you instruct your employees about this type of scams.

Such Tumblr virus variant also is called sockpuppet attack because it involves malicious users hiding behind fake accounts targeting legitimate users. The purpose of such attacks is to make people follow bogus accounts back. Once the account gains followers, it can post gore pictures, chocking content, or material embedded with malicious links. This is not the content that you want to be exposed to, especially when the account you manage is a corporate blog.

Bogus Tumblr accounts are typically using random names, no avatar, and similar signs showing that something is wrong. In most cases, just pay attention to these red flags and avoid such accounts when they follow you. Just ignore them and wait until Tumblr team takes care of them.

Profiles delivering such posts seem legitimate because they have avatars, normal-looking account names. However, once the link gets clicked, it typically redirects you to suspicious pages filled with promotional content, fake updates, and similar stuff. Do NOT click on these offers to prevent more serious malware on the system.

The developers of Tumblr virus are also working on obtaining leaked data from breaches to misuse stolen email addresses and account credentials. Various vulnerabilities and bugs in such platforms can reveal personal data of users that is valuable when the criminal is expecting to use it in secondary scams.

Not so long ago we discussed the particular issue with Tumblr security and personal data[2] which is closely related to scams involving email notifications, messaging apps or even other social media. All the possible variants depend on stolen information since it can be an email address, the full name and other logins leading to serious issues.

The more particular scam that can also involve stolen information affects people all over the world and aims to get personal details from victims with the purpose of getting their money or lead to identity theft. Email notifications claim to have your Tumblr account credentials and gathered pornographic or otherwise disturbing photos of you. Scammers claim to reveal such information if you restrain from paying them. In most cases, these people have one password of yours and aim to scare you by trying to guess that you use the same login info for more that one account. This is how criminals make people believe their claims.

Various users reported about such malware on their mobile devices when suspicious messages get sent from their accounts to other people.[3] It also involves messages about hacked account or pages not loading properly on the phone only. When your blog and account work normally on the PC, but issues appear on the mobile device, you can be sure that the particular machine has malware and your account is not hacked. 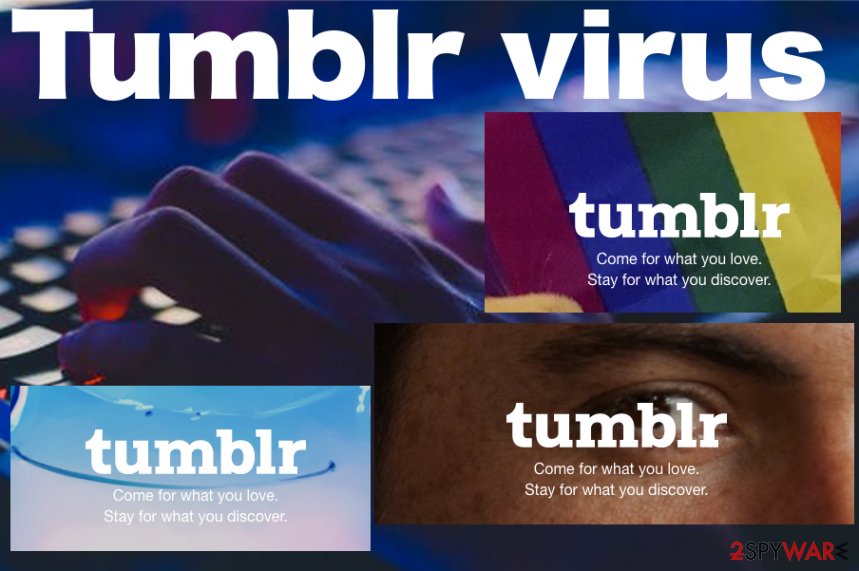 You can avoid such infiltrations and those scary email scams if you pay closer attention to the content you visit and change your passwords to different and more complex ones. You can remove Tumblr virus no matter which campaign you got targeted by if you use professional anti-malware tools and clean the machine from malware automatically.

Tumblr virus removal process can be complicated if you are dealing with a few different versions or a more severe campaign. For that reason, we recommend rebooting the machine in the Safe Mode with Networking so your AV tool can gather all the malicious files and delete them. We also offer to scan the device with ReimageIntego, so virus damage is cleaned entirely.

Many security experts[4] note that any social media malware can involve messages and campaigns on other platforms too target people via other channels. Tumblr virus can also send Facebook regarding messages or even scammer alerts like the FBI virus, as various people reported online.[5]

Virus delivery methods also depend on the developers' goal

In the cybersecurity world malicious files, infected sites, other online content can deliver different programs, or even allow the attacker to access your device remotely. When malware involves social media, blogging platforms, or other services, the main legitimate website is not the one that you get these malicious programs from. The main social network is safe to use, but content involved on the website can lead to infiltrations of cyber threats.

A few examples of how such a virus can be distributed:

The best tip you, as a social media user should take from this article is to create complex, long passwords for your accounts, choose different ones for all accounts, so there is no luck when malicious actors play the password guessing game. Keep anti-malware programs on your PC, so the tool can block PUPs and other malware before it enters the machine.

You need to remove Tumblr virus no matter the particular type of malware that it is based on. The best tip we can give you as cybersecurity researchers – scan the machine thoroughly with an anti-malware program and clean the device by deleting any indicated threats or even system errors and issues.

Tumblr virus removal becomes difficult when malicious actors create a threat with the capability of changing registry entries, system preferences, adding programs or applications directly to the computer. For that purpose, we suggest rebooting the machine in the Safe Mode before cleaning the system with tools like ReimageIntego, SpyHunter 5Combo Cleaner, or Malwarebytes.

When it is difficult to remove the Tumblr virus, you can rely on System Restore feature that can recover the device in a previous state before virus attack and damage

Finally, you should always think about the protection of crypto-ransomwares. In order to protect your computer from Tumblr and other ransomwares, use a reputable anti-spyware, such as ReimageIntego, SpyHunter 5Combo Cleaner or Malwarebytes

You can quickly scan the QR code with your mobile device and have Tumblr virus manual removal instructions right in your pocket.