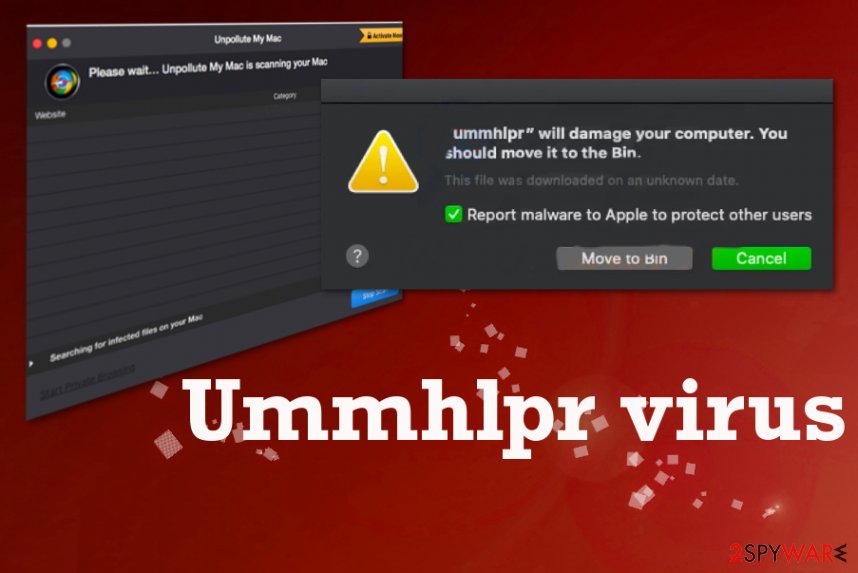 Ummhlpr virus is the program that spreads on macOS devices when Unpollute My Mac gets installed and shows questionable pop-up errors. Ummhlpr virus is the unwanted application that gets installed with the rogue system optimizer and causes pop-up messages stating about the possible damage. This is not a malicious program, but it causes frustration and runs in the background affecting the speed significantly. As for the initial program that infiltrated the machine, Unpollute My Mac is a tool advertised as a utility that optimizes the macOS devices and solves problems regarding the corrupted files or even malware. Unfortunately, those claims are not real and there is no reason to use such rogue tools as legitimate system programs. When the potentially unwanted program gets on the machine you are forced to encounter various issues like system freezes and pop-up errors.

This shady Ummhlpr Mac Virus is advertised on deceptive websites and often gets distributed via such pages since clicking on promotional content can also trigger the direct download of the application or associated files. Sometimes you can find ummhlpr.app.zip, other programs in the system or ummhlpr process running in the background and even causing additional slowness due to the usage of CPU or other resources. These symptoms even appear when the initial rogue tool is deleted from the system, so the uninstallation is significantly affected.

You may even install more dangerous malware if you leave the Ummhlpr unwanted program running in the background. The application changes various parts of the system and alters settings to keep running in the background for long. All the modifications significantly diminish the performance and interfere with the speed, so this behavior should indicate the suspicious PUP infiltration.

If the ummhlpr.app.zip runs on the system for a while, the machine can become exposed to malware content and various programs get added to the system without permissions. Due to such vulnerabilities, your device may get infected with viruses that can:

You need to remove Ummhlpr virus as soon as possible, so you can avoid the additional infiltration of such threats. The best solution for the infection of this sort is the anti-malware tool because a program like Reimage Reimage Cleaner Intego can indicate the possibly malicious programs and files, remove all the potential intruders completely, during one system check. 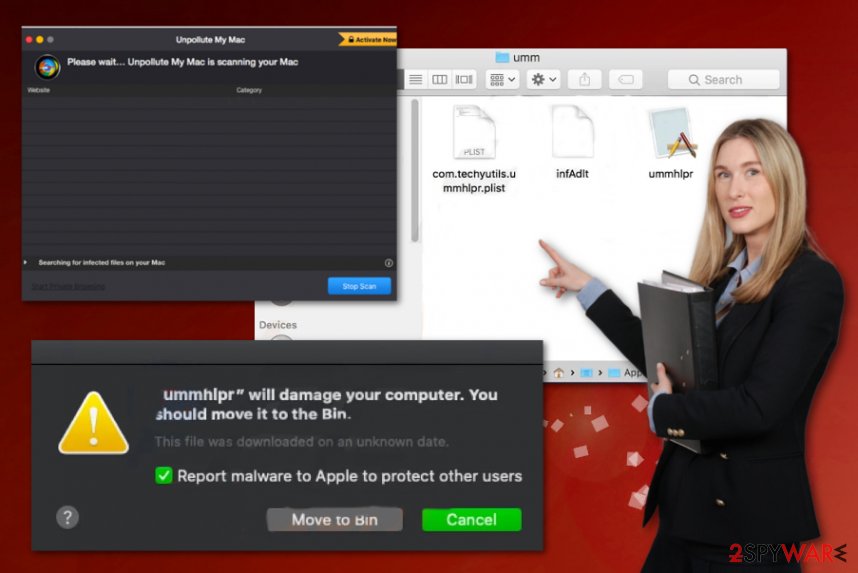 Ummhlpr virus is the application that remains unnoticed until the unwanted usage of resources like CPU or memory affects the slowness of the machine. Once the Unpollute My Mac gets loaded on the system, ummhlpr.app.zip starts also running in the background. Even though on macOS you can uninstall and get rid of the program automatically by dragging the folder to Trash, some files get left behind. Due to these leftovers, unwanted activities are not ending and although the application is gone, your machine still runs slow.

Ummhlpr virus gets promoted on shady pages and distributed using various deceptive techniques, so you shouldn't trust anything found online, especially when content promotes tools and programs that resemble other suspicious software. All these macOS optimizers claim to have many features improving the machine and cleaning the malware even, but there is nothing valuable.

Make sure to perform Ummhlpr virus removal with automatic tools, so all the programs, files and associated logs or files planted in different libraries get eliminated completely. Your device should immediately run more smooth and stop crashing. You may need to go to Activity Monitor and manually find the process running in the background that makes the biggest difference.

Ummhlpr virus, unfortunately, can cause issues with your privacy and identity if you leave it running for a while in the background. This way application finds its way to settings and alters them, also various commercial content can expose you to content that is focused on ad-tracking and collecting. Experts[3] always say that any PUP that redirects and shows commercial material can access details about your browsing preferences. 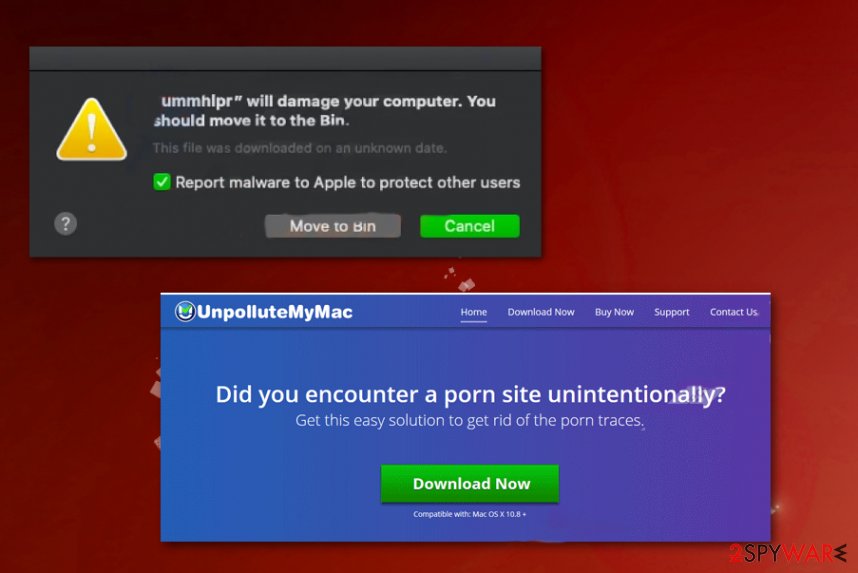 Pop-up errors and other messages about possible damage can be not legitimate in most cases, so you should take into consideration facts that downloaders and installers from unofficial pages can include intruders and malicious scripts which, in most cases, gets hidden during the installation process.

This happens because Recommended or Quick options allow all the extra offers get downloaded and installed. You should go for Advanced or Custom installations, so the full list is revealed and you can de-select unwanted programs from that list. We recommend doing this every time you install anything from the internet. This is especially important when you don't choose official providers and go for torrent services or deceptive sites.

Eliminate all the files associated with rogue tools, including Ummhlpr virus processes and applications

You need to remove Ummhlpr virus because setup wizard, installers and other core files left behind can renew the installation of the suspicious system tool. This is how you encountered this cyber infection in the first place by installing the rogue software willingly or not.

Ummhlpr virus is the part of a setup package and installer belonging to various macOS system tools that are considered unwanted applications and possibly damaging programs. This is a questionable program that can cause all sorts of problems and pose danger to your information, credentials, and files stored on the machine.

This application interferes with crucial processes and can even disable some security functions, so Ummhlpr virus removal is a crucial step in the security of your machine. Remember that all those cyber threats can also lead to installations of more serious malware.

Get rid of Ummhlpr from Mozilla Firefox (FF)

You can quickly scan the QR code with your mobile device and have Ummhlpr virus manual removal instructions right in your pocket.