Lavasoft web companion is a system tool which has been actively spreading around with the help of bundling.

Web companion is a legitimate application created by Lavasoft. According to developers, the program can add an extra layer of protection by blocking potentially unwanted programs like adware or browser hijackers. Ironically, Web companion itself is a PUP, as it usually gets installed with shareware and freeware programs deceptively. This so-called security tool cannot be trusted by computer users because it can display false positives and mislead its victims into believing that they are infected by bogus viruses. Additionally, Web companion actively pushes its paid version as the only way to evade issues that it detected. However, security experts, Reddit community and other respectable parties do not believe that it is worth spending your money on such a questionable tool.

The main problem related to the software is the methods used in its distribution. The developers of Web companion have already admitted that their product is distributed via popular marketing method called bundling[1]. They clearly identify in their FAQ section that the application might appear on user's computer without direct permission and start operating on the system:

Web Companion is most commonly distributed within another software product that you or someone who uses your PC has elected to install. This is known as “bundled software distribution” and is a practice widely used by software makers worldwide to make money while delivering free software to their end-users.

While some users might question what is Adaware Web companion, others refer to this program as Web companion virus. Security researchers indicate that this is not the right term to describe this software. It should be attributed to Potentially unwanted program category because of its stealthy techniques used to enter the system and also sell its licensed version. However, we should also add that program's activity can also be quite annoying and cause trouble when trying to uninstall this so-called system protection tool.

Once installed, Web companion claims to protect against the following threats:

However, users start receiving notifications about detected threats from the app right after the first scan is finished. Unfortunately, these alerts do not have an expiry date, so you can be flooded with never-ending messages each time you start using your computer. It has been significantly deteriorating users' browsing experience because it keeps popping up without a break.

Unfortunately, virus scan results and additional ads by Web companion virus are not necessarily trustworthy. Developers aim to generate revenue and try to trick people into believing that their computers are infected to continue using less than reliable services. In some cases, users might even be prompted to purchase the premium version or install additional security tools. 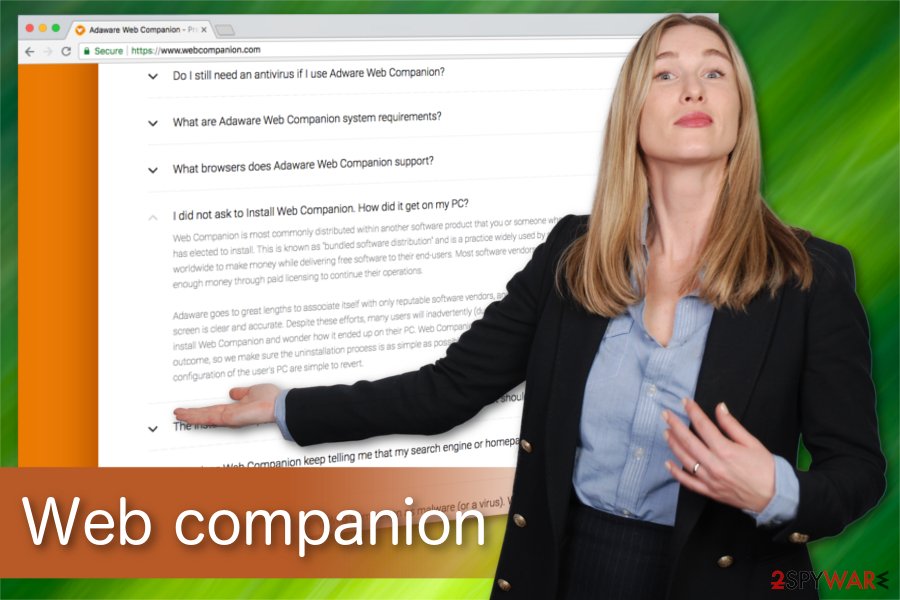 Web companion is often described as a virus since it delivers annoying virus scan pop-ups.

Therefore, we recommend you to get a trustworthy tool to maintain your computer's security. In addition, if you have been questioning yourself “should I remove Web companion from the system,” our answer is “yes, you should.” You can uninstall the app from Windows 7, Windows 10 or other Windows operating system with the help of the step-by-step guide given below.

Manual Web companion removal doesn't take much time. However, run our recommended tools to make sure that there are no leftover files on the system. Keep in mind that such apps tend to modify the computer's registry and initiate additional modifications to start working with every system's startup. To revert these changes, we suggest using Reimage Reimage Cleaner Intego.

People keep finding the app installed without their approval. Ways to prevent it

The answer to the question how did Web companion get installed on my computer is more than simple —  this security tool spreads in a bundle with third-party applications. In other terms, you install the software during the installation of free programs. Even though this distribution technique is legitimate, users can fail to identify and reject programs they don't want to install. As a result, victims have started numerous discussions about the unexpected appearance of this tool on Reddit, Quora, Microsoft, and similar tech forums.[3][4]

Although, here are some tips on how to avoid the installation of additional components: 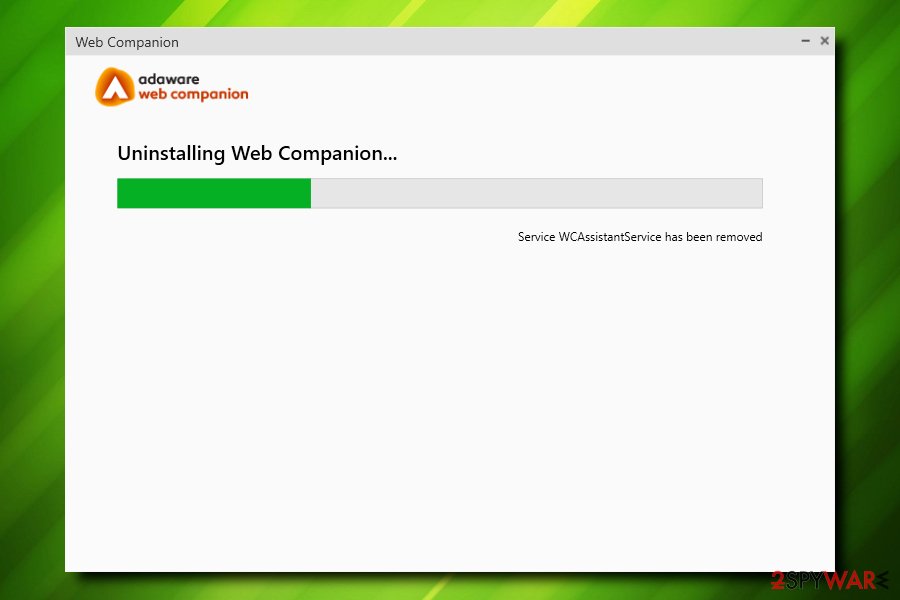 How to uninstall Web companion from Windows

If you have already tried this security tool and found it useless, we recommend you to remove Lavasoft Web companion right away. You have two options — manual and automatic elimination for the removal of this app. However, as we have already pointed out, the app is not malicious and you should have no issues while trying to get rid of it manually.

Nevertheless, as BedyNet.ru[5] researchers and other experts declare, the best way to protect the computer against potentially unwanted programs in the future is to have a reliable antivirus installed on the system. It will also uninstall all unnecessary applications that might have come to your system via software-bundles.

In this case, perform Web companion removal from Windows 10 and other versions by using the guidelines presented below. We highly recommend uninstalling all suspicious entries from the system to prevent other issues on your computer in the future. To prevent software bundles, don't forget to monitor installation of every software you download. For that, you just need to opt for Custom/Advanced installation mode.

Get rid of Web companion from Windows systems

To uninstall Adware Web Companion from Windows, follow these steps:

If you are using an older Windows version, go thru these steps:

You can quickly scan the QR code with your mobile device and have Web companion manual removal instructions right in your pocket.