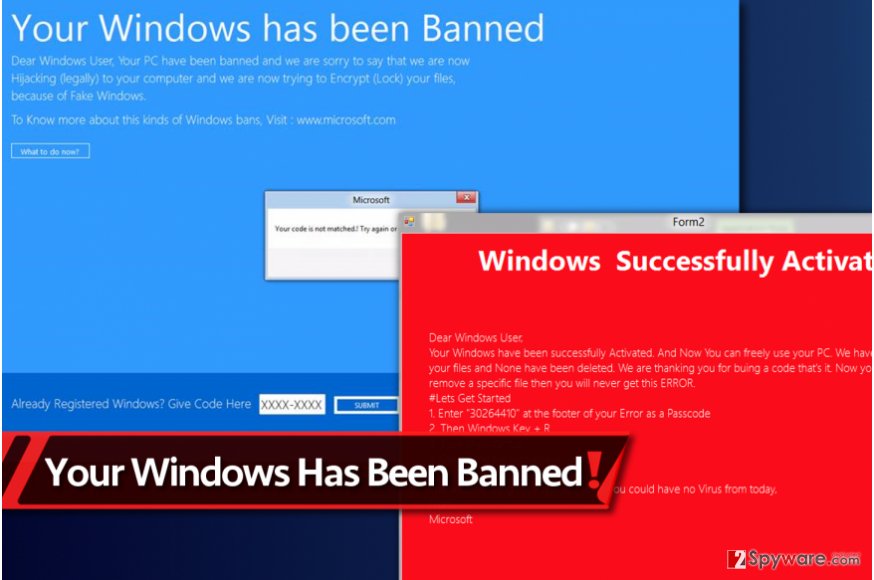 Your Windows Has Been Banned virus is a deceptive malware-type program meant to frighten the computer user and make him call tech support scammers. In fact, it is very similar to “Your Windows Has Been Blocked” virus. Among the recent Internet scams[1], these viruses occupy exceptional positions.

Comparing with other tech support scams[2], “Your Windows Has Been Banned” creates more trouble. What is more, its technical structure is more complex as well. Alternatively, this virus is called as Black virus Lockscreen. Due to its distinctive feature to demand “some free,” it highly resembles ransomware threats which often encrypt the files and later on demand money in exchange for the unblocking service.

In some cases, the latter threats lock the screen as well. Though the alert might look terrifying, you should not give in to the pressure and pay the money. Follow our “Your Windows Has Been Banned” removal instructions. They include the steps how you can exit the lock screen and then proceed to the elimination steps.

Questions about Your Windows Has Been Banned virus

Though similar tech support scams have become relatively convincing and realistic, there are some obvious flaws and mistakes which suggest that the presented message is a hoax. However, users who are not tech-savvy[3] may easily get alerted and frightened by such accusations that the device was blocked due to suspicious activity. Take a look at the message:

Your PC has been banned because we detected unusual activity on your computer. To protect the Windows service and its members. Your PC maybe has been infected with viruses that do an unusual activity. To grant access back to your PC, please pay some free to trusted Microsoft Technician and the Microsoft Technician will give you a code to unlock your PC. To contact nearest Microsoft technician, please click the button below.

If a real Windows error occurs, the operating system will display BSOD[4] (“blue screen of death”) and guide you through the instructions to automatic repair or troubleshoot.

However, in the case of Your Windows Has Been Banned malware, you are encouraged to pay a certain amount of money. Keep in mind that such behavior is certainly illegal and Microsoft will never ask you to pay any money for solving issues.

For the future note, you should also not rush to follow any guidelines if you see an indicated number of a supposed technician. Luckily, famous virus researcher, Michael Gillespie, found the code which unlocks the lock screen – 6666666666666666.

After you type it, the same message will appear but only in README.txt file. In any case, it is not entirely difficult to remove Your Windows Has Been Banned. One of the ways to do that is to run Reimage Reimage Cleaner Intego.

If this scam operates as the ransomware, particularly Black Virus Lockscreen, then you might see the following message:

'Your PC has been infected with Black virus, this virus will destroy all your files in 72 hours, to prevent this you just have to send a tweet with this template:

New version of Your Windows Has Been Banned virus

Recently, a new version of Your Windows Has Been Banned virus emerged. This virus also works like a screen locker, which means that it doesn't encrypt victim's files. The virus arrives in the form of microsoft.exe file, but the name of this file can differ depending on the version of it. The virus displays a full-screen message, which says:

Dear Windows User, Your PC have been banned and we are sorry to say that we are now Hijacking (legally) to your computer and we are now trying to Encrypt (Lock) your files, because of fake Windows. To know more about this kinds of Windows bans, visit: [Link to Microsoft's official website].

Of course, this scam has nothing to do with the real Microsoft and the company never uses such tricks to force users purchase “legal Windows keys” by installing screen-locking software on their computers. This virus makes a few tweaks in Windows Registry[5] to disable Task Manager. Once the victim clicks on a “What to do now?” button, the virus explains that the user needs to pay $200 to microsoftxyber@hackindex.com via Paypal.

However, you shouldn't pay such sum to scammers, especially because it is possible to unlock the computer for free. Researchers from Microsoft discovered that the virus has the unlock key embedded in the virus' code, and it is 30264410. The virus will display a “Windows Successfully Activated” message, which can be closed by clicking “X” button. We strongly recommend scanning the system with anti-malware tool afterward. 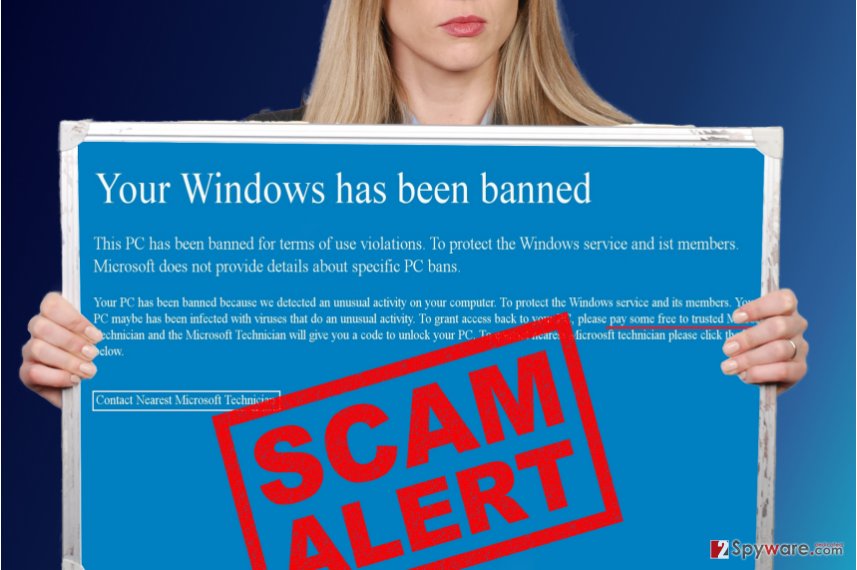 Your Windows Has Been Banned virus launches such window on the computer screen.

“Warning! Your Windows Has Been Blocked” virus emerges in 2017

“Warning! Your Windows has been blocked” is another deceptive alert displayed by various phishing websites. These websites are designed to look like Microsoft Support site; however, they are filled with warnings and error messages from scammers. Usually, these sites contain a phone number written in large font. Besides, Your Windows Has Been Blocked scam pages trigger a pop-up that says:

Your Windows has been blocked due to suspicious activity! Please call Support Now! Call Toll-Free: +1-888-616-9444 (Toll-Free) to find the right solution.
Are you sure you want to leave this page?

The deceptive message keeps appearing on the victim's screen and often prevents the victim from closing the phishing website. Besides, these sites play audio messages suggesting that victim's privacy was infringed by some malicious programs and that victim's computer and personal data are at risk.

These threats are fake, and you should not react to them. Instead, remove “Warning! Your Windows has been blocked” virus using anti-malware software and continue browsing the Internet without any interruptions.

The reason why scammers want you to call them is that they want to swindle money or valuable personal information from you. Do not give them an opportunity to do it. Never call someone who claims that your system was compromised and check your computer with an anti-malware software to identify the infection first.

Your Windows Has Been Banned hijack most likely occurred when you downloaded a corrupted software or clicked on a malicious link. Surprisingly, there is a fair chance to encounter the virus while downloading the content from file-sharing domains as well.

The malware has the potential to evolve into a devastating cyber infection as it encompasses the features of adware, malware, and ransomware. Such shape-shifting form enables it to spread and wreak havoc faster.

Since it has distinctive characteristics of file-encrypting viruses, it might employ spam or software bundling for distribution in the future as well. You should install a reputable anti-spyware tool and run along with anti-virus to boost up the protection level of your computer.

Besides, choose Custom or Advanced settings whenever you install new programs. These will provide you with information about programs included in your download. If you see some unexpected ones, deselect the permissions to install them.

“Your Windows Has Been Banned” removal tutorial

The fastest way to remove Your Windows Has Been Banned virus is to use anti-malware software. When it comes to malware or ransomware, we always recommend users to shift to automatic elimination. After you install a security tool (Reimage Reimage Cleaner Intego or Malwarebytes), check for the updates. It goes without saying that it could take ages for an inexperienced PC user to find all of virus' components.

It is vital that the software would have the newest virus definition in order to delete this virus or any other malware completely. The tech support scam malware may have rooted deeply in the system and hid its registry entries as well.

Likewise, it is important that the virus would be eliminated with all its files. Before you proceed to “Your Windows Has Been Banned” removal, unlock the screen. The following instructions might come in handy as well.

To remove Your Windows Has Been Banned virus, follow these steps:

Remove Your Windows Has Been Banned using Safe Mode with Networking

It is a must to restart your computer in a Safe Mode with Networking in order to removeYour Windows Has Been Banned virus. Follow the instructions we prepared for the best results.

Remove Your Windows Has Been Banned using System Restore

Guide which is presented above is supposed to help you remove Your Windows Has Been Banned from your computer. To recover your encrypted files, we recommend using a detailed guide prepared by 2-spyware.com security experts.

If your files are encrypted by Your Windows Has Been Banned, you can use several methods to restore them:

Though this virus does not encode personal files, but you should keep in mind that this tool helps recover some files after ransomware infects the device.

Finally, you should always think about the protection of crypto-ransomwares. In order to protect your computer from Your Windows Has Been Banned and other ransomwares, use a reputable anti-spyware, such as Reimage Reimage Cleaner Intego, SpyHunter 5Combo Cleaner or Malwarebytes

Your opinion regarding Your Windows Has Been Banned virus Cancel reply

You can quickly scan the QR code with your mobile device and have Your Windows Has Been Banned virus manual removal instructions right in your pocket.

Poll
How did you remove Your Windows Has Been Banned virus?
4.83 % used phone support
20.93 % downloaded software
26.23 % used free removal instructions
46.97 % combined software and removal instructions
0 % used email support
1.04 % got answer using Ask us service
Your vote has been submitted!
Vote »
I have problems with Your Windows Has Been Banned virus removal
View results »