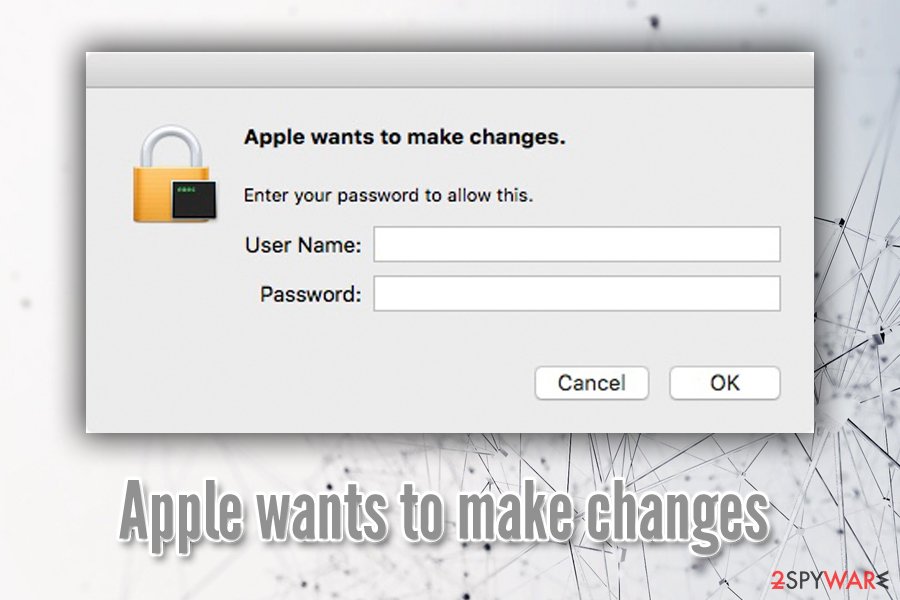 However, “Apple wants to make changes” alert is a scam and should not be trusted. Users are asked to provide their login credentials in the following message:

It is not clear what is to be changed and for what reason and users should immediately question this. The goal of “Apple wants to make changes” is to make users provide their login credentials or install potentially unwanted programs/malware on their computers.

However, it is also worth mentioning that the reason for “Apple wants to make changes” prompt to show up is most likely an adware[1] extension that is attached to one of the browsers, or even malware. To stop these annoying prompts, users need to terminate this malicious software from their machines as soon as possible either manually or by using anti-malware software.

In some cases, the suspicious “Apple wants to make changes” pop-up might also be embedded on a particular site. In such a case, it might be triggered as soon as users get redirected from another malicious website. Then, the only way to stop “Apple wants to make changes” notifications is by using ad-blocking apps like Ad-block or uBlock. Otherwise, the termination of adware is the only way to get rid of the pop-ups.

“Apple wants to make changes” virus is mimicking legitimate pop-ups that require users to enter their login details, for example, “Finder wants to make changes.” This is done to make users believe that the pop-up is genuine and that the information is required for certain activities to be performed.

Nonetheless, there are no details of what exactly is being changed or why. Additionally, Apple would never use its name in such notifications. Therefore, users should not enter any details into the bogus window and hurry up with “Apple wants to make changes” removal.

There are several other similar scams triggered by adware, including:

While authors of these scams typically try to make users pay for useless software, “Apple wants to make changes” scam might use Mac's credentials to remotely access it and install malicious software, such as keyloggers, ransomware,[2] or crypto-mining malware.

However, as it turns out, “Apple wants to make changes” is a just a part of the scheme that crooks use to mislead users into providing their personal information and downloading unwanted software or malware. “Apple” is not the only words that are chosen for the scam scheme, as users also observed pop-ups like “Network Layer wants to make changes” – this is no accident, as the malware behind the prompt uses a predetermined list of words and changes them from time to time.[3]

One of the infected users' computer examination showed that the prompts were very likely started due to Sombrisec – this component is the one that initiates the admin prompts and is a part of backdoor Trojan.[4] Additionally, the Tituricsec should be immediately eliminated if found on the system as well, as it is a part of the notorious SafeFinder virus. 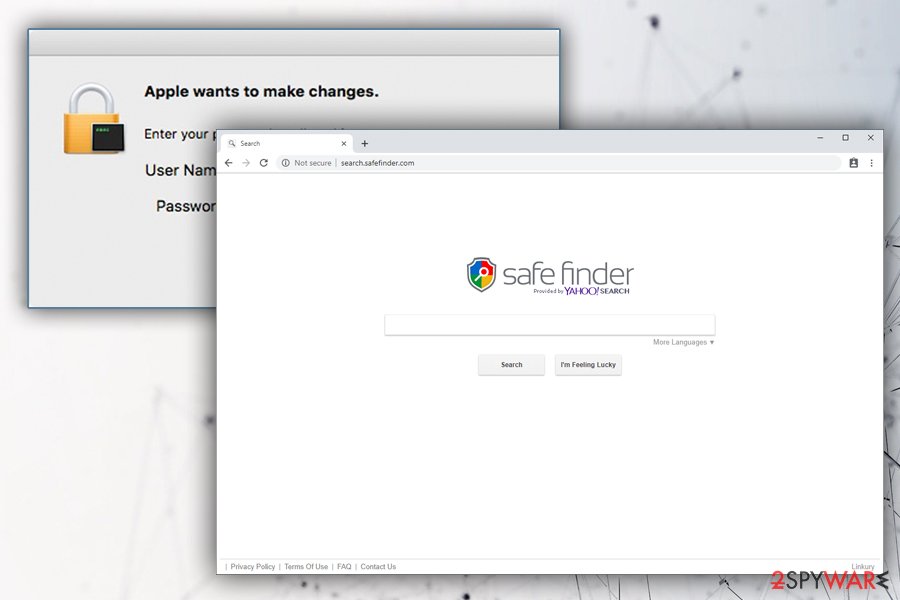 “Apple wants to make changes” pop-ups might stem due to several computer infection on the system, including Trojans and Adware.

Adware is an ad-supported application that usually delivers pop-ups, banners, tech support scams and other commercial content to the used browsers. Its goal is to advertise products or services of sponsored parties and obtain revenue that way. However, some adware is straight out malicious and initiates pop-ups like “Apple wants to make changes” seeking to swindle users' personal data and make then install other potentially malicious software.

In most of the cases, users get infected with adware after installing applications not from the official App store or after being prompted online to install fake Flash[5] or other updates. Because most do not recognize that what they downloaded onto their Mac is not an update, the malicious software can operate in the background and show the “Apple wants to make changes” alerts and similar messages.

Such infections are prevalent and extremely dangerous, as it poses serious privacy risks, like stealing money or even identity theft. Thus, do not enter any details if you see this fake message, and simply close it down. However, the fact that these fake alerts are present on your machine indicates an infection of a potentially unwanted program. To remove “Apple wants to make changes” pop-ups, you should scan your computer using anti-malware software.

As soon as all the suspicious applications are uninstalled, you should check for traces left by the PUP. We recommend using automatic tools like Reimage Reimage Cleaner Intego for such a process.

Along with the deceptive pop-up, users will most likely notice the increased amount of ads. If clicked, users can be redirected to malicious websites and prompt the installation of other rogue software. Additionally, users have to deal with constant rerouting problems, as well as bogus search results. Thus, it is vital to stay away from any links that are encountered while “Apple wants to make changes” pop-up window is present in the system. 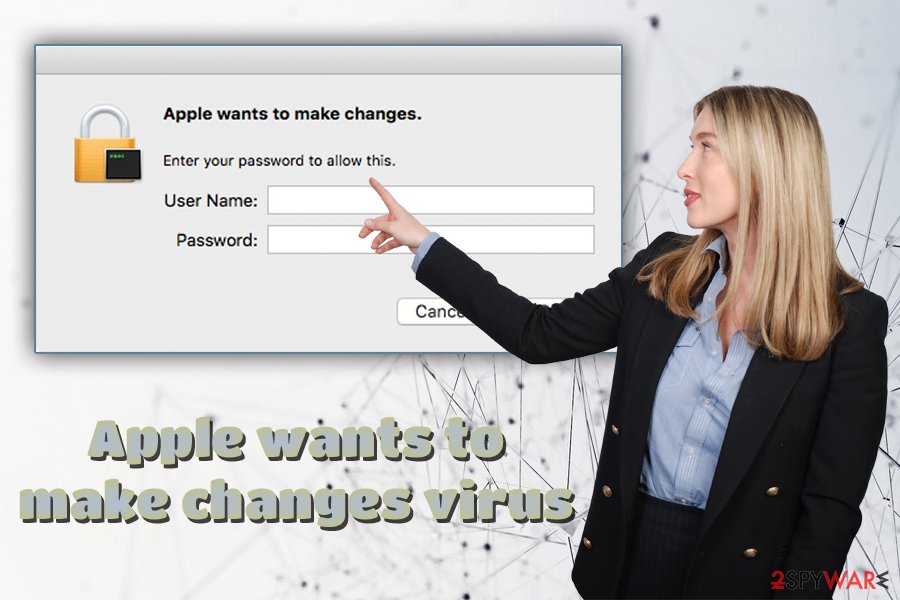 Some adware can pose a serious risk – avoid its installation entirely

Some aggressive adware might as well be treated like malware, as the goal of it is to steal private information, money, or inject viruses on the computer. Therefore, avoiding such threats in the first place could save you a lot of distress. Security experts from bedynet.ru[6] advise users to take these precaution measures:

Many users on official Apple forums were asking about the message in question. The answer is simple: the pop-up is fake and “Apple wants to make changes” removal is the only way to stop it. In order to achieve that, users will have to eliminate adware and malware from their Macs.

While it is possible to remove “Apple wants to make changes” virus manually, we do not recommend doing so. After eliminating suspicious applications, traces of the PUP can still be left on the machine. Therefore, by using reliable anti-virus software, you will not have to worry about the malicious pop-ups coming back. The real-time protection is particularly important when it comes to the infection of new threats.

If you choose to remove malware manually, you should check the following locations for malicious entries on your Mac:

Please check if you have these entries. If so, remove them immediately:

To remove Apple wants to make changes, follow these steps:

Make sure you follow these steps carefully to get rid of Apple wants to make changes pop-up virus:

Get rid of Apple wants to make changes from Microsoft Edge

Once these steps are finished, Apple wants to make changes should be removed from your Microsoft Edge browser.

As soon as the PUP is eliminated, clear you Safari browser as follows:

Your opinion regarding Apple wants to make changes Cancel reply

You can quickly scan the QR code with your mobile device and have Apple wants to make changes manual removal instructions right in your pocket.