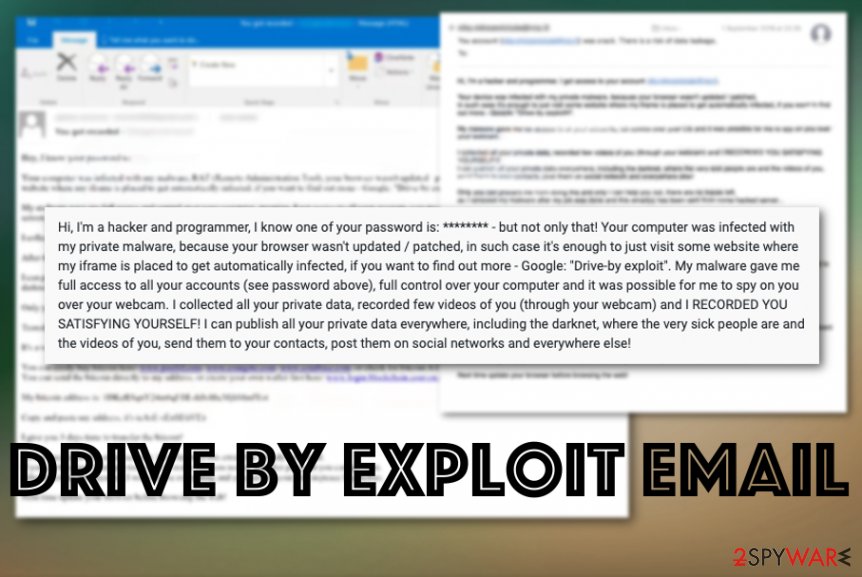 Drive by Exploit email is a scam campaign that sends emails with a false message about the hacked account or infected system.

Drive by Exploit is is a term that was incorporated in a recent money extortion scam campaign, and the email author claims that the computer owner was infected with malware using this technique. However, the term, strictly speaking, is not entirely correct, as the infection method the fake email creator is referring to is called “Drive-by download” or “Drive-by install” – this is one of many signs that victims should pay attention to when dealing with Drive by Exploit scam.

Drive by Exploit email is a common type of scam that goes around the internet, targeting people whose email login credentials were previously compromised in one of the data breaches. Unfortunately, those claims about a disturbing video and webcam recordings frighten users and they fear for their privacy and reputation. Hackers demand at least $726 in Bitcoin to allegedly keep the compromising records undisclosed. However, you should be aware that crooks are simply lying about getting malware into your machine via the drive-by download method.

Questions about Drive by Exploit email

However, Drive by Exploit email scam is elaborate, because many users are unfamiliar with the term “Drive by exploit,” and, while it is not entirely accurate, such infection method exists and can be used as one of the major attack vectors by cybercriminals – the information leakage is always a possible threat. This is why experts[1] recommend changing all the passwords to complex ones that are never reused for different accounts.[2]

Drive by Exploit email is only one of many similar extortion/sextortion scams that surfaced online. This one was reported multiple times online in these past few months, so it seems that criminals are not stopping with their malicious campaigns.[4] People who receive the scammy message report that it comes with a lengthy notification and all those claims about your private information, hacked account, pornographic content.

The email message states that all the malicious activities can only be stopped by paying the ransom demanded on the scammy Drive-by Exploit email. Although reports from victims state that the message is pretty much the same for all the targets, a ransom amount can go from $726 to $1200. Remember that these are fraudulent statements, and there is no malware on your device, in most cases.

Nevertheless, you should exit the window with that scam message and try to remove Drive-by Exploit email traces and possibly related programs, files. Also, your device may be exploited due to some vulnerabilities that you are not aware of, so get an anti-malware tool and scan the machine to avoid serious malware infection consequences. After a scan with anti-virus, we also recommend using Reimage Reimage Cleaner Intego for best results. 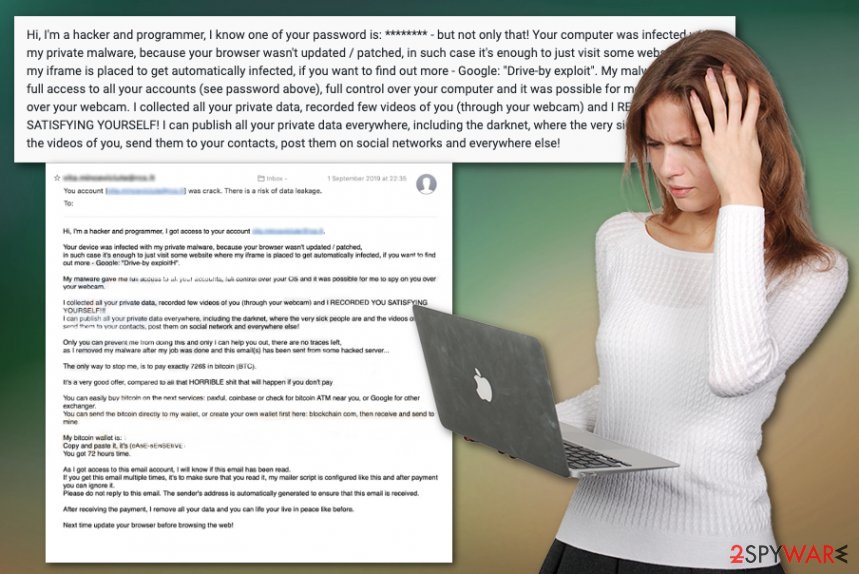 Drive by Exploit is an email scam that focuses on getting money or personal information from victims. Drive-by Exploit email delivers the message stating that the person sending it is either a programmer or a hacker and tricks into believing that your device or email account has been hacked. There is no need to panic because this is a classic scam campaign that focuses on short claims and intimidation, high-pressure tactics.

Your computer was infected with my private malware, because your browser wasn't updated / patched, in such case it's enough to just visit some website where my iframe is placed to get automatically infected, if you want to find out more – Google: “Drive-by exploit”.

My malware gave me full access to all your accounts (see password above), full control over your computer and it was possible for me to spy on you over your webcam. I collected all your private data, recorded few videos of you (through your webcam) and I RECORDED YOU SATISFYING YOURSELF!

I can publish all your private data everywhere, including the darknet, where the very sick people are and the videos of you, send them to your contacts, post them on social networks and everywhere else!

You need to exit the email as soon as possible and remove Drive by Exploit email, any traces of other malware, and programs that possibly got installed already behind your back. To fully eliminate the issues surfacing on the computer, you should rely on professional anti-malware tools that can find and delete those malicious programs.

Additional tips for Drive by Exploit email removal can be: 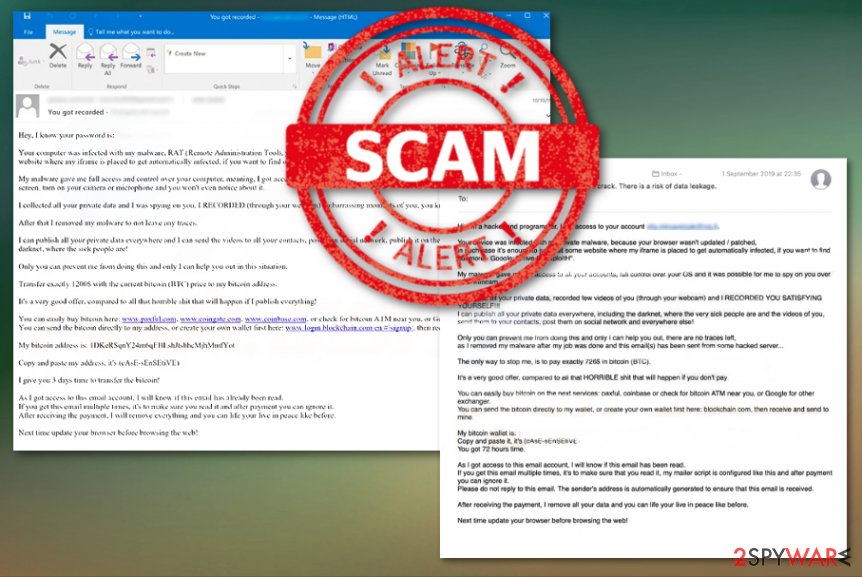 Drive by Exploit email is the malicious campaign based on social engineering and fraudulent techniques to get money from gullible people.

Malicious files may be attached to emails and deceptive advertisements

Malware campaigns involve various distribution techniques and methods used to spread infections behind the user's back, while no symptoms are caused. It happens when various deceptive techniques get employed. Deceptive sites, copies of real domains with malicious scripts all over them, even other spam emails deliver payloads on the targeted computers.

Criminals disguise their products as common files and even plants malicious scrips in push notifications, deceptive promotional sites. You need to pay close attention to anything that appears on your screen, especially when it involves emails, social media accounts. Try to keep the AV tools running and securing the machine.

Drive by-Exploit email virus can also occur on mobile devices, despite the operating system, so you should be aware of these fraudulent emails when you check the email box on your iPhone or Android phone. The best way to avoid any infiltration of malware is to run malware scans more often on all your devices.

Drive by Exploit email removal can be performed with the anti-malware program also, and this is the best way to clean any program that can initiate the infiltration of different malware. Powerful security programs can also indicate system flaws and security issues.

You can remove Drive by Exploit email, other intruders, and PUPs that your antivirus tool indicates with a few clicks of the computer mouse. This is the best way to tackle cyber infections because all traces can be cleaned automatically. Of course, double-check before any other steps and make sure to avoid shady emails in the future.

To remove Drive by Exploit email, follow these steps:

Your opinion regarding Drive by Exploit email Cancel reply

You can quickly scan the QR code with your mobile device and have Drive by Exploit email manual removal instructions right in your pocket.