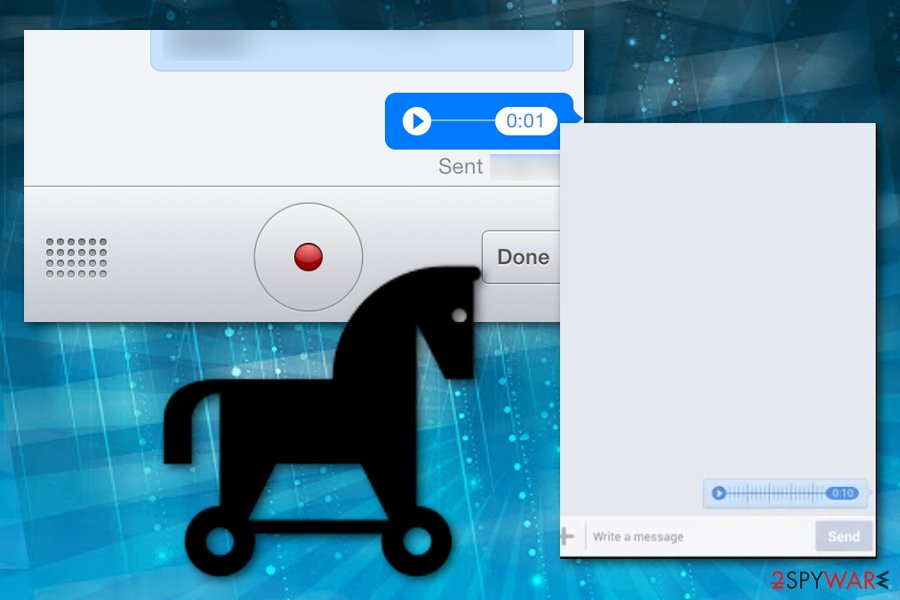 Facebook voice message virus, also recognized as Facebook Messenger voice message virus, is a malware-based campaign that distributes trojans and other types of threats via fake voice messages. This type of cyberattack has been developed over the past years and has been hitting users worldwide by employing different tactics. There is a chance that you might receive Messenger voice message virus from a fake or stolen Facebook account or get tagged in a group post that includes the misleading voice message. Even though the message itself might not always directly launch the installation of malware, it might reroute the user to some type of potentially dangerous website where cyber threats such as trojans, ransomware viruses, cryptocurrency miners, browser hijackers, or adware are distributed.

Facebook voice message virus is a malicious campaign that belongs to the wide Facebook virus category. A malware-based attack can attempt to target any type of user, nevermind your age or location. Regarding this fact, every user needs to be careful not to fall for the tricks that are employed by cybercriminals. However, according to Virusai experts,[1] there truly might also be some malware exploited for attacking people from specific countries, regions, and other types of groups.

Facebook voice message virus can be really dangerous if its voice messages are taken for granted and opened by the targeted victim. You can receive Messenger notifications from random users or some people that you even know if their accounts got hacked by some types of crooks. The malware might be executed directly by pressing on the provided voice message or you can get redirected to a website where some types of viruses are deployed.

Furthermore, the user can get tagged in some type of group post that includes malicious voice messages. This content can also reroute the user to a misleading website that provides suspicious content (links, ads) that contains the malicious payload. Nevertheless, the message itself might include a hyperlink that directly downloads the malware to the targeted computer system. This way you can get infected with a dangerous parasite through Messenger voice message virus.

There are big chances that Facebook Messenger voice message virus will infect you with a Trojan horse[2] as these cyber threats can include a wide range of features that are beneficial for the cybercriminals. If you catch this dangerous infection, you will likely not spot any symptoms at first as the malware is programmed to hide itself to remain persistent for a longer period of time. The Trojan virus can even end up disabling your antivirus software to avoid detection.

If you are an advanced user that is always curious about his computer state and the entire cyber environment, you might be able to detect some signs that malware has been placed on your computer after opening a mysterious voice message placed by Facebook voice message virus. Most of the symptoms include highly-increased CPU[3] work level, random processes running in the Task Manager, struggling software, windows are failing to minimize or maximize properly.

If you have been experiencing these types of symptoms lately, you should be aware that there is a big chance of a malware infection residing on your computer. You can check that out by running a full malware scan with your antivirus program. If you see that your antimalware is being blocked, you should reboot your Windows computer in Safe Mode with Networking as shown at the end of this article and continue with the Facebook voice message virus removal immediately.

When you remove Facebook voice message virus from the PC, you need to make sure that the Trojan that had been hiding in the machine did not make any damage to the system and its components. If you encounter some altered areas, you can try repairing them with ReimageIntego or any other fixing tool. Note that the removal of the cyber threat is a very important process that you need to get concerned about once finding the first symptoms of malicious infection.

If you postpone the elimination of the malware, there is a big chance that Facebook voice message virus will bring you big losses and unrepairable corruption. Trojans can include your machine in a botnet, provide remote computer access to the crooks that will be able to complete any types of activities on your PC, including the installation of other malware forms, e.g. ransomware, spyware, additional trojans, the destruction of valuable files, folders, and programs.

Nevertheless, if Facebook voice message virus appears to be a trojan, there is a big chance to experience data theft. The malware is capable of accessing all the sensitive data that is provided on your computer, including banking details that might let crooks to access your bank account and wipe out all of the money that is placed there. Also, personally-identifiable data might be shared in the dark web market as a way to earn income.

If Facebook voice message virus brings other malware such as ransomware to the computer system, you will get your files encrypted and be provided with ransom demands. If it is cryptocurrency mining software that is placed on your PC, the malicious program will overuse your system's resources for collecting digital currency. Adware and browser hijackers are the least harmful threats that can infiltrate your PC but they are capable of hijacking browsers and causing other interruptive activities such as advertising and redirecting that can lead the user to malware-laden pages at the end.

Avoid unknown voice messages on Facebook that can spread malware

Facebook virus campaigns are widespread nowadays and one of them works through the distribution of malicious voice messages. These Messenger notifications can look completely legitimate from the first view, however, they mostly come from a hacked or stolen Facebook account that you should be aware of. Additionally, you can get tagged in some type of group post where a voice message is also distributed.

The first thing that you need to do is to be careful when receiving any type of voice message. If your friend tells you that he/she is going to send you this type of notification, then it is fine to open it. However, if you receive the message from a random person, this should raise a lot of questions for you. We recommend deleting the received content instead of risking to open it and getting infected with dangerous malware such as a Trojan virus.

The same goes for group tags. If you have been tagged in some random post that includes a voice message, you should remove the tag and avoid clicking on the provided content as the message can execute the installation process of the malware or lead you to a domain where malicious software is distributed.

If you have been infected with some type of malware, you need to remove Facebook voice message virus that has invaded your computer system as soon as possible. Do not postpone this process as there is a big chance of receiving complete PC or software damage. Employ reliable antimalware software and go take care of your machine. If the malware has been preventing you from using these types of tools, you should boot your PC in Safe Mode with Networking as shown at the end of this article.

When you complete Facebook voice message virus removal, try using programs such as SpyHunter 5Combo Cleaner or Malwarebytes to find out the damaged areas on your computer. If they have detected any compromised locations on your PC, you might be able to fix them by running software such as ReimageIntego or any other similar and helpful tool.

To diminish malicious changes on your Windows computer system and deactivate the malware, you should apply the following steps and reboot your machine in Safe Mode with Networking

To disable the malicious piece of software and diminish all of the misleading settings that were applied to your computer, use the below-provided instructions to activate the System Restore feature

Finally, you should always think about the protection of crypto-ransomwares. In order to protect your computer from Facebook voice message and other ransomwares, use a reputable anti-spyware, such as ReimageIntego, SpyHunter 5Combo Cleaner or Malwarebytes

You can quickly scan the QR code with your mobile device and have Facebook voice message virus manual removal instructions right in your pocket.