JobCrypter ransomware – dangerous cryptovirus that returns with the French version

JobCrypter – a dangerous ransomware that appeared at the beginning of 2016. The ransom message displayed by the malware is written in French and uses the story about the need to feed big families. However, such trickery does not deny the fact that the hackers are using a file-encrypting virus to make their victims to pay 300 EUR per computer. The virus returned with new strength on July 2018. At the moment, hackers are using the .css file extension to mark encrypted files and an email address called frthnfdsgalknbvfkj@outlook.fr.

JobCrypter is attacking PCs in the form of a trojan horse[1]. Reportedly, this malware is distributed as a ZIP file via spam emails that presents itself as an important invoice, business document or similar notice. When a user attempts to extract this malicious ZIP archive, the virus sets itself to run at the next computer startup.

After rebooting the computer, JobCrypter starts its malicious processes immediately – it encrypts personal records including audio, video, music files, and documents. Then it drops a ransom note saying that to recover the personal records, the user must pay approximately 300 euros by purchasing Paysafe cards and send their ID codes to three email addresses provided. Certainly, such sample of the malware does not only cause amusement but a great load of problems for the affected users.

During last year, the virus did not go well as there were more complex ransomware samples spreading around. However, to everyone's surprise, JobCrypter ransomware emerged again in July 2018. It seems that the ransom message did not change much except that it was updated in terms of technical capacity.

If you got infected, make sure you remove JobCrypter to prevent the loss of your files. If you can see the .css extension appended to your data, it means that the virus has already encrypted your data behind your back. In this case, start the elimination with ReimageIntego to prevent yet another encryption on your computer. 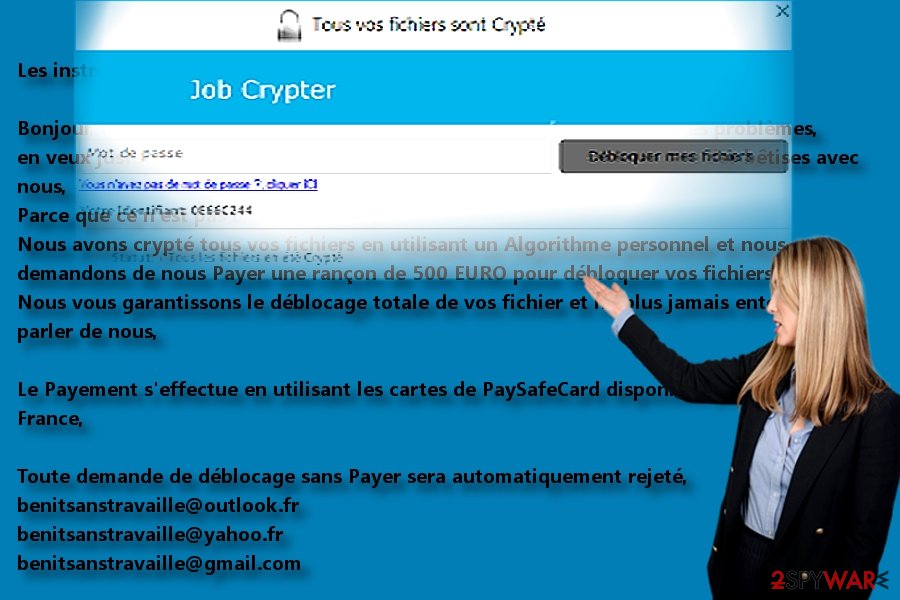 JobCrypter ransomware is claiming that its developers are "unemployed" and are waiting for the financial support.

Despite the presence and emergence of such sophisticated threats as Sage virus and Spora ransomware[2], the malware owners decided to keep the old veneer. Instead of communicating with their victims via TOR network,[3] they use an old method related to PaySafeCard.

What is more, the amount of the ransom has been raised as well. The crooks demand 500 EUR for decryption of the files in contrast to the previously requested 300 euros. They elaborated the structure of the distributing malware as well. Luckily, major anti-virus tools are able to detect Job Crypter. It is detectable under such names:

Lastly, the racketeers simplified the payment procedure. The original version suggested using SafeCard payment services. Now crooks simply ask to contact them via the indicated email addresses. It is unwise to meddle with the penetrators. Focus on JobCrypter removal.

The transmission tendencies of the malware

JobCrypter hijack is delivered via spam emails[4]. Therefore, to avoid installing the virus, you should keep out of emails that come from unknown senders, and do not download or open any files attached to them. If you have even the smallest suspicion, contact the sender to make sure that it is a real person.

What is more, restrain from visiting torrent and similar file-sharing domains or insecure download websites[5] because they might harbor quite destructive threats. If you ever encounter pop-up ads that suggest installing software updates when browsing online, ignore them. It is very likely that these “updates” include malicious files attached to them. Avoid clicking on doubtfully reliable ads or banners on gambling or pornographic websites, as it is believed that such websites might provide dangerous content.

Remove JobCrypter virus automatically by combining an anti-virus app and malware removal software. Update them and start the scan. If you cannot launch them or your computer screen is locked, follow below-suggested guidelines. Keep in mind that data recovery procedure will take effect when the malware is fully exterminated. To disable the virus and proceed to the JobCrypter removal, reboot your PC to Safe Mode at first. All the necessary information on how to do it is provided below.

On the final note, pay attention while downloading any content from the Internet to prevent similar malware in the future. Do not enable any extensions and plug-ins without verifying their reliability.

Though JobCrypter virus seems to be less elaborate, it may still wreak havoc on a system and prevent you from removing it. Launch your security apps in Safe Mode.

Guide which is presented above is supposed to help you remove JobCrypter from your computer. To recover your encrypted files, we recommend using a detailed guide prepared by 2-spyware.com security experts.

If your files are encrypted by JobCrypter, you can use several methods to restore them:

Decrypting the files with ShadowExplorer

Shadow volume copies are the copies of your files and programs created by an operating system. This program recreates the files by using these copies.

In December 2016, IT experts have devised a free decryption tool. However, it was created for the first version of the malware. On the other hand, JobCrypter 2.0 virus does not seem to possess a highly exquisite structure so you might stand a chance.

Finally, you should always think about the protection of crypto-ransomwares. In order to protect your computer from JobCrypter and other ransomwares, use a reputable anti-spyware, such as ReimageIntego, SpyHunter 5Combo Cleaner or Malwarebytes

You can quickly scan the QR code with your mobile device and have JobCrypter virus manual removal instructions right in your pocket.