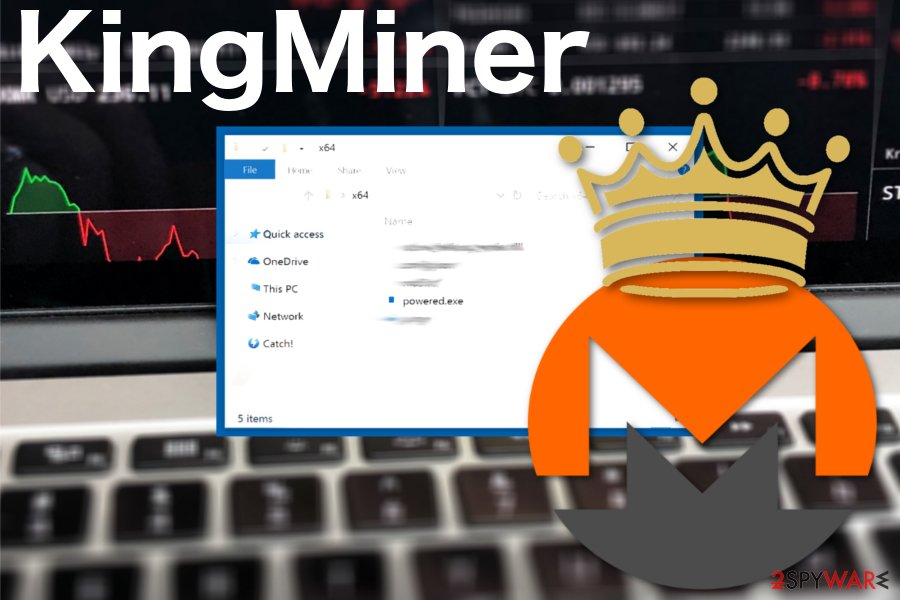 KingMiner trojan is a malware that generates cryptocurrency while powered.exe runs in the background. This is yet another trojan horse that uses XMRig crypto mining program to generate Monero cryptocurrency.[1] The process can remain unnoticed for a while because the malware shows no symptoms. However, KingMiner virus uses resources of your computer, for example, it utilizes CPU. When you notice the suspicious process running in the background and using almost 100% of CPU, it becomes noticeable. The cryptocurrency mining process is affecting the performance of your device to benefit the hacker, so you need to get rid of this malware immediately after its detection.

KingMiner developers use a modified version of a well-known XMRig cryptocurrency miner, and the main purpose of this malware is to mine Monero to benefit cybercriminals. However, the trojan horse can be responsible for additional functions:

However, this process is related to KingMiner trojan, but people cannot associate it with any threat for a while. When the file starts utilizing almost 100% of the CPU or using other resources, people start considering virus infection. All this background activity causes system freezes or crashes, issues with graphics or drivers.

Various antivirus programs can detect the trojan malware dubbed KingMiner, but the detection name differs from tool to tool:

Nevertheless, you need to remove KingMiner as soon as possible to make sure that no important parts of the device got affected by this notorious malware. The best solution for these silent cyber infections is anti-malware tools like Reimage Reimage Cleaner Intego, or any other security software of your choice.

Perform KingMiner removal and make sure to clean the system if you want to use the device as before. Also, follow our tips and enter the Safe Mode with Networking before you perform a full system scan to make sure the virus and all related files can be removed entirely. 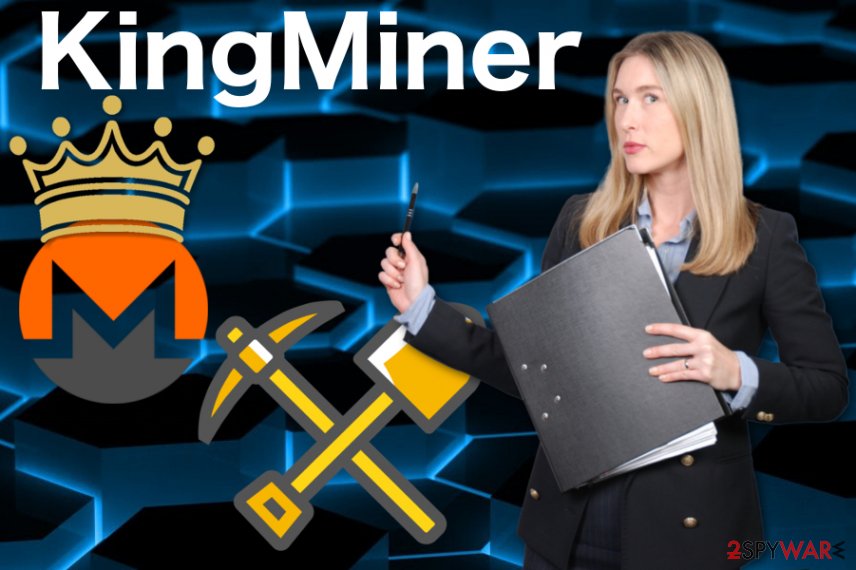 KingMiner virus is a trojan horse that generates Monero cryptocurrency by running in the background of your device.

Using suspicious websites as your software providers or getting programs from the internet via p2p services can lead to malware infiltration and unwanted installations. Also, opening emails from unknown sources, especially if the email contains file attachments, can result in more severe malware infections.

Trojans, malware or even ransomware can spread on the system when you open the infected document. Researchers[4] note that spam email campaigns get more and more advanced because emails often fo straight to your regular email box and contain well-known company or service names as a disguise.

When you open the infected Word or Excel, PDF file malicious macros are triggered, and payload launches in the system. Then direct malware is installed on your computer or malicious script is spreading further on the targeted network. You can avoid this infiltration by installing advanced anti-malware and scanning the system occasionally.

Remove KingMiner from the system with anti-malware tools like Reimage Reimage Cleaner Intego, SpyHunter 5Combo Cleaner or Malwarebytes and clean the system further this way. A full system scan using these programs detects all malicious files, programs or potential threats and helps to delete them.

After the automatic KingMiner removal using anti-malware, make sure that no additional processes are running in the background of your computer. You can check this in your Task Manager, then end the process that is suspicious or using high CPU.

You may need to enter the Safe Mode before scanning the system with antivirus program because KingMiner virus is a persistent threat that alters various parts of the system and even adds Windows registry keys to make sure the malicious process is loaded every time your PC is turned on.

Finally, you should always think about the protection of crypto-ransomwares. In order to protect your computer from KingMiner and other ransomwares, use a reputable anti-spyware, such as Reimage Reimage Cleaner Intego, SpyHunter 5Combo Cleaner or Malwarebytes

Your opinion regarding KingMiner Cancel reply

You can quickly scan the QR code with your mobile device and have KingMiner manual removal instructions right in your pocket.