LOPTR ransomware: Locky will not withdraw from the market anytime soon

LOPTR virus operates as the latest version of Locky ransomware family[1]. This threat has remained one of the most destructive threats along with Cerber malware since 2016. Like its predecessor, the latest edition employs the same combination of algorithms, RSA-2048, and AES-128. It does not take too long for the victims to spot the malware as it appends .loptr file extension to personal files. Furthermore, the ransomware replaces users‘ background into the ransom note. In order to retrieve files, the malware suggests downloading Tor browser and access .onion sites. There a victim should insert the ID key. He or she will get the decrypter only after remitting the payment. Despite the network and evolution of Locky, there are significantly fewer reports about retrieved files. Since the first appearance, the malware has released multiple versions. Most well-known are Zepto, ODIN, Osiris, .zzzzz file extension virus, Hucky, etc. On February, its activity significantly deteriorated. However, the virtual community rejoiced not for long as on April, the malware returned with a new spam technique[2]. Thus, it would be better to switch to LOPTR removal. Reimage Reimage Cleaner Intego or Malwarebytes ensures the elimination of the threat. 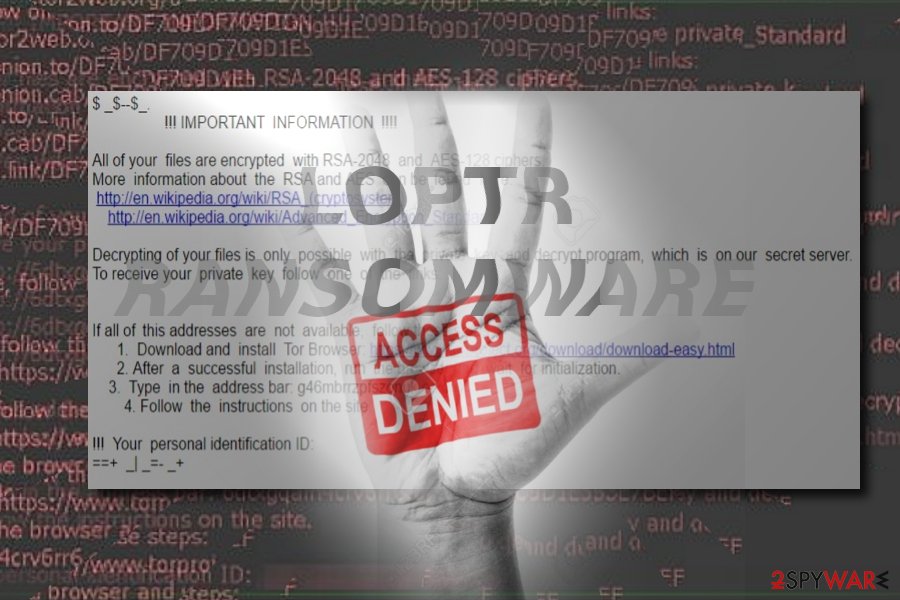 The name “Locky” evokes the image of the Scandinavian god bearing the same name. The subsequent version, Odin, suggested that the hackers are taking inspiration from Norse mythology. However, other alternative versions presented a new theory. Several months ago, Locky reinforced its attack with Aesir ransomware. The name is taken from popular PC game Bayonetta 2. There, the God of Chaos, Aesir, is constituted of two entities: Loki and Loptr. Thus, it suggests that the cyber criminals also engage in playing PC games which might imply their young age. Taking into account the success of this malware, an individual or small team of cyber crooks are unlikely to maintain the campaign of the ransomware. It is speculated that other racketeers or groups of felons from other countries cooperate to keep the virus alive. A while ago, the Hungarian version of Locky had been released to spread terror. Botnets are another factor explaining why this malware still rampages on the cyber space. Necurs botnet, which earlier focused on ordinary spam, now shifted to spreading this family of malware[3]. Thus, the current version might also be using this botnet to deliver its attacks. Nonetheless, even if users get infected with this troublesome infection, it is still possible to remove LOPTR.

Transmission techniques of the virus

LOPTR hijack might be distributed via several campaigns. The developers of Locky prefer using spam emails. Usually, the hackers target users with fake subpoenas and package delivery emails and payment receipts. Note that at the end of the last year, Locky infiltrated “Facebook” and spread its malicious .svg photo file[4]. Thus, even if you receive an email with alarming content, do not rush to open the attached file without verifying the sender. In addition, since the malware joined forces with a series of other malware such as Nemucod trojan and RIG exploit kit[5], there is a risk to get infected with this malware if you browse suspicious websites overcrowded with links offering to uninstall shady apps or visit questionable domains. In order to limit the probability to encounter this menace, make sure you install a security application. In addition, since now malware is becoming more sophisticated, digital tools may not always help you escape the threat. While you await for the update of your security applications, note that you may avoid a number of threats simply by employing your ultimate weapon – your rational mind. 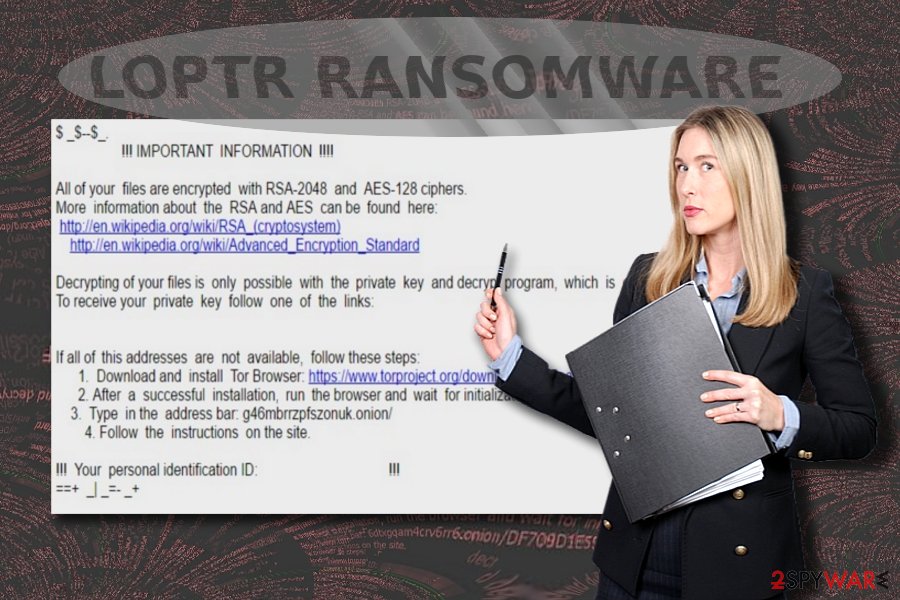 There is hope that LOPTR will not evolve into a bigger cyber campaign as not all versions of Locky are evenly active and destructive.

There are many articles covering Locky and its modus operandi. Despite how menacing it may look, there is a way to terminate the malware. Remove LOPTR virus with the assistance of malware elimination tool. Our previously recommended tools might come in handy as well. However, note that such applications do not decrypt files. For that purpose, you might find relevant information about data recovery at the bottom of the page. If you cannot perform LOPTR removal, restart the device into Safe mode or opt for System Restore.

Safe Mode grants you access only to a limited number of functions. However, then you are able to continue Loptr removal.

Guide which is presented above is supposed to help you remove LOPTR from your computer. To recover your encrypted files, we recommend using a detailed guide prepared by 2-spyware.com security experts.

If your files are encrypted by LOPTR, you can use several methods to restore them:

Though there is no 100% guarantee that the program will restore all your files, you might give it a try.

If you are in a quite desperate situation, i.e. if you do not have backup copies which you could use for data retrieval, this tool might succeed in recovering your files. There are no reports whether the current version of malware deletes shadow volume copies — the main tool of Shadow Explorer. By using these patterns, the app restores files.

If you are infected with the malware, the crooks might offer you to purchase their decryption software. bear in mind the elaborate structure of Locky and its terror on the cyber space. Even if you succeed in restoring files, note taht the software might serve for future infiltration.

Finally, you should always think about the protection of crypto-ransomwares. In order to protect your computer from LOPTR and other ransomwares, use a reputable anti-spyware, such as Reimage Reimage Cleaner Intego, SpyHunter 5Combo Cleaner or Malwarebytes

You can quickly scan the QR code with your mobile device and have LOPTR ransomware virus manual removal instructions right in your pocket.