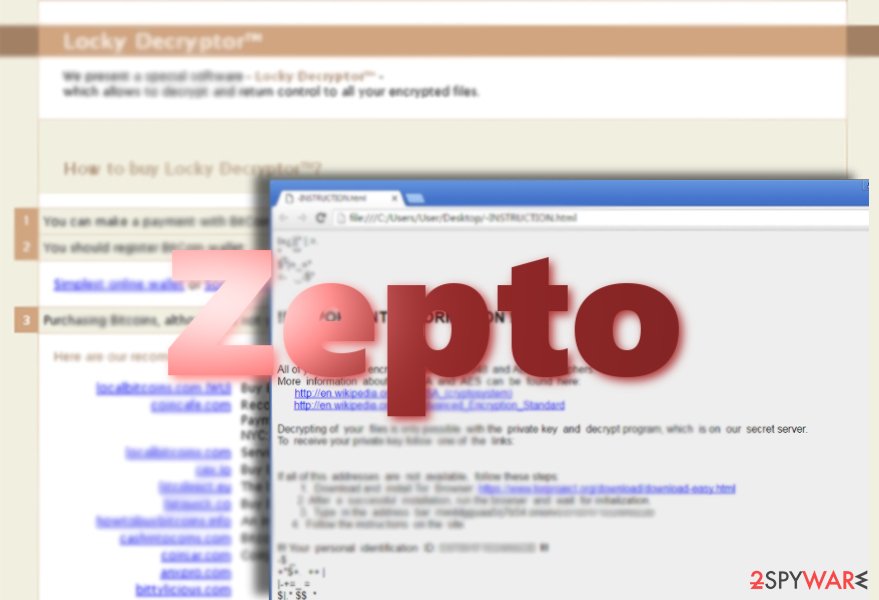 Zepto ransomware is one of the dangerous Locky virus versions which performs data encryption. This ransomware family is considered to be one of the most hazardous cyber threats of 2016 and spreads via malicious spam emails[1]. According to the researchers approximately 150 thousand letters were holding the obfuscated payload of Zepto ransomware as an attachment[2]. The malspam campaign is detected spreading via Necurs botnet and compromised files contain .zepto extension. Zepto virus uses the combination of AES 128 and RSA 2048 algorithms to encode information.

The latest versions detected of Zepto ransomware are Lukitus and Ykcol. Users are tricked into downloading an infected .zip or .docm attachment by tempting subject lines, such as the following:

Similarly to Bart ransomware, this virtual infection attempts to deceive users to execute a JavaScript file or enable macros. Once it's done, it encodes files with RSA-2048 and AES-128 ciphers. As a result, they get blocked bearing .zepto extension. At the end of the encryption process [3], Zepto ransomware changes the desktop picture with an image that presents information about the virus and a request to pay a ransom. If this menace has befallen you, you should still remove Zepto. You might also try this free Zepto Decrypter afterward.

Now the attention might be directed to Lukitus and Ykcol versions which hide in .7z email attachments. Though Zepto virus was most active in the end of 2016, even now some companies report getting infected with this version. Since the cyber criminals shuffle Locky variations, it would not be surprising if you can get infected with Zepto malware after opening .7z attachment. 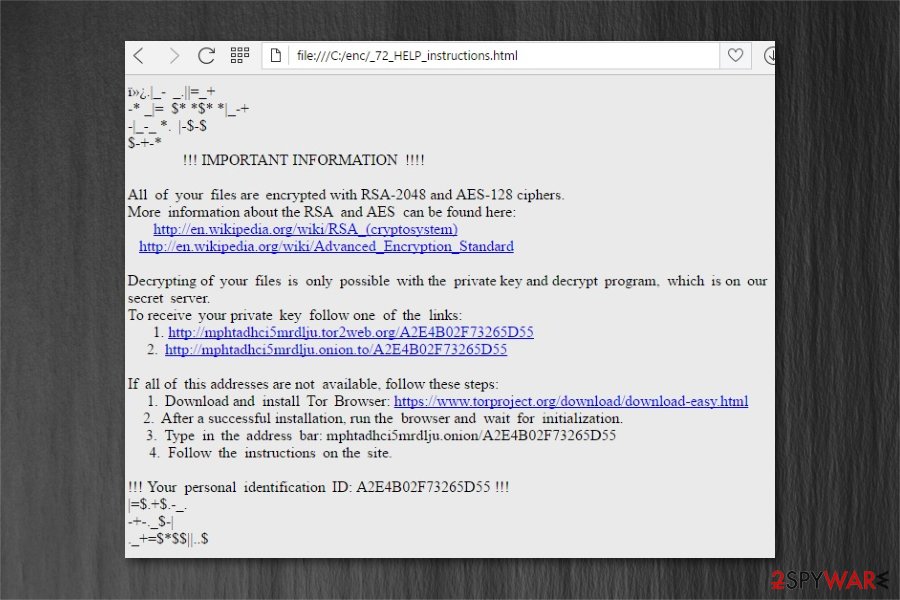 Take into the consideration that hackers apply emotional pressure to persuade users to hurry with the payment [4]. Likewise, they succeeded in collecting more than $100,000 with the help of Zepto ransomware. Let us assure that there are ways to complete Zepto removal. The most effective of them is to use Reimage Reimage Cleaner Intego.

Like in the previous versions, Zepto activates via the dll file which is executed by rundll32.exe file. The latter is a legitimate system process. Likewise, it allows escape users' intervention. Just as other ransom-demanding viruses, this malware leaves one of the following ransom notes:

Zepto ransomware states that there is no other way to decrypt files but to pay a ransom and receive a private key and a decryption program. We highly discourage you from purchasing the tool promoted by the perpetrators as it seems a malicious software as well.

Instructions on how to access Zepto payment site are also provided by this virus. During the investigation process, we discovered that the payment site advertises Locky decrypter which was used by another ransomware called Locky. Now it can be purchased for 4 Bitcoins (approximately 2541 USD).

Of course, you should never think of that because you can be left without both, your files and your money. To recover your data, you should remove Zepto first and then restore your files from a backup. Take a look at the ransom note by Zepto virus:

Decrypting of your files is only possible with the private key and decrypt program, which is on our secret server.
To receive your private key follow one of the links:

If all of this addresses are not available, follow these steps:
1. Download and install Tor Browser:
2. After a successful installation, run the browser and wait for initialization.
3. Type in the address bar:
4. Follow the instructions on the site.

After Locky rampaged on the virtual world for a couple of months, soon afterward, the cyber campaign of Zepto was launched. It reached its peak in July. Ordinary and corporate users all around the world were assaulted by Zepto ransomware. Thus, even if you reside in Sweden[5], which is regarded as the country with the lowest malware rate, stay vigilant.

As previously mentioned, the threat employs swift [XXX|XXXX].js file for a disguise. By pretending to be a financial report or invoice, it captures victims' attention. Opening the attachment enables Zepto ransomware to start its mischief in thousands of computers. After sending HTTP GET requests, the threat is able to get important information about victims computers. This also enables .zepto file extension virus to infect the bigger amount of computers.

By planting its wscript.exe executable [6] among the registry files, Zepto ransomware keeps the device in its claws even if you reboot it. Moreover, the virus has been updated to such extent that even Windows Defender fails to block it. Therefore, it is of crucial importance that your security applications are updated daily.

Moreover, ODIN ransomware appeared as a backup to the original version of the threat. It seems that the felons do not intend to step aside. 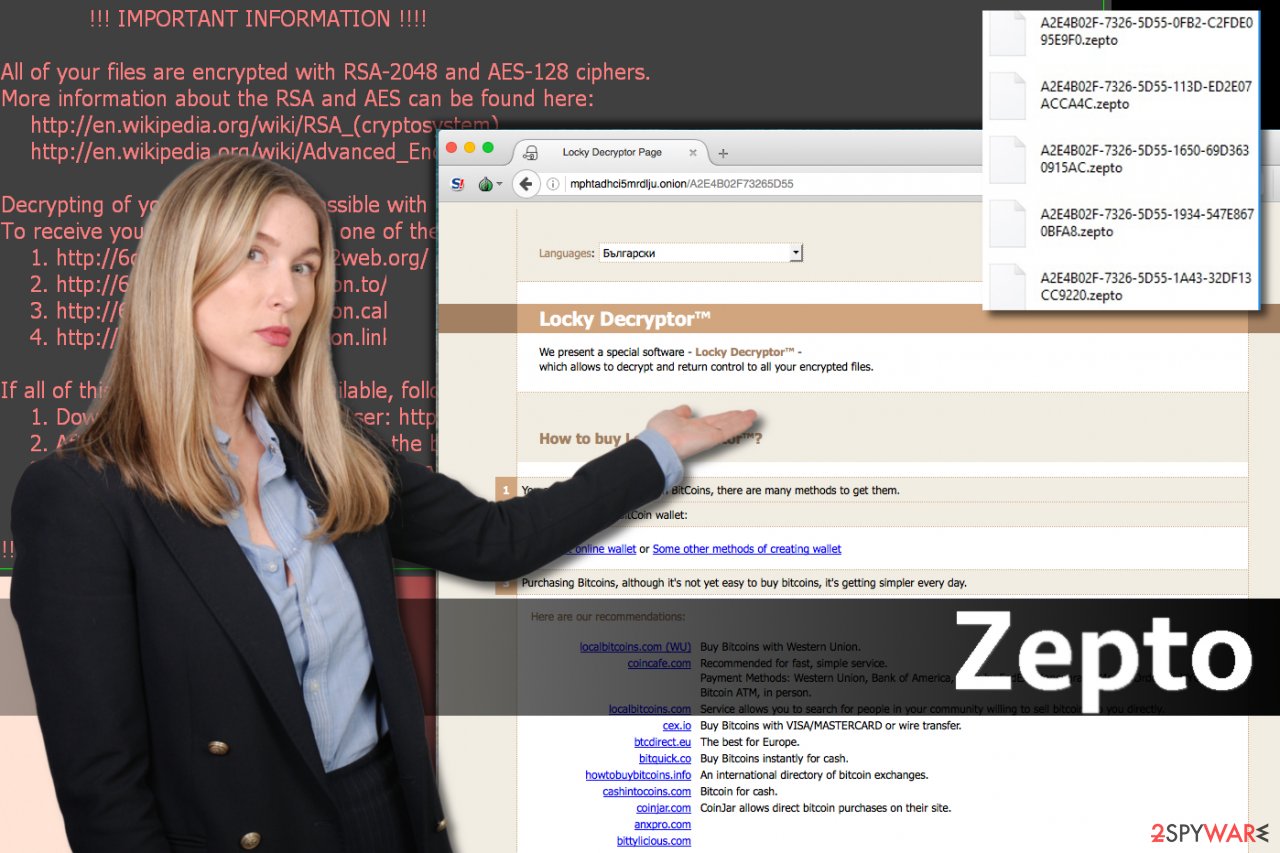 Despite all the new variants of Locky ransomware, Zepto virus is still detected spreading all across the world. Researchers note that this file-encrypting cyber threat reached its distribution peak of 150% from July to September in 2017. Nonetheless, since then, though the spam campaign of this particular version subsided slightly, IT specialists spot its variations once in a while. The recent Zepto version disguised under luainstall.dll file. It also disguised under the following names: 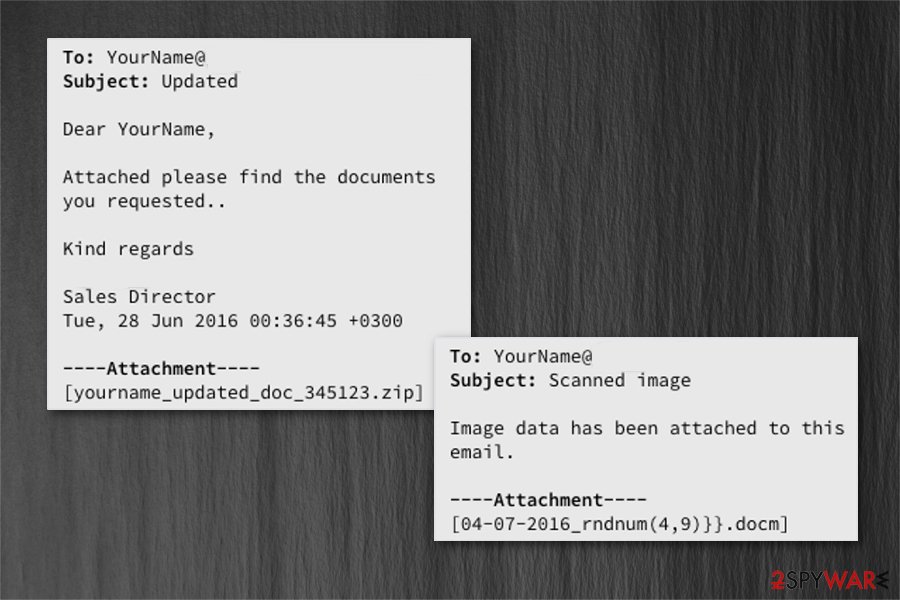 However, they were asked to install the plugin to play the video. This bogus plugin is Nemucod Trojan which is responsible for activating malware on the affected computer. Malware analysts expect Zepto to spread on Facebook or other social networks as well. Therefore, chances to encounter this cyber menace remain high. The only free and safe data recovery solution is backups.

The peculiarities of the original Locky ransomware

The precursor of Zepto ransomware, known as Locky virus, has numerous versions which are regularly released in the cyberspace. The original version of the file-encrypting virus was first discovered in February. Attackers keep upgrading the malware to ensure that decryption tools by security firms would be disabled. Additionally, the updates help to improve the security of cybercriminals and help them remain anonymous. 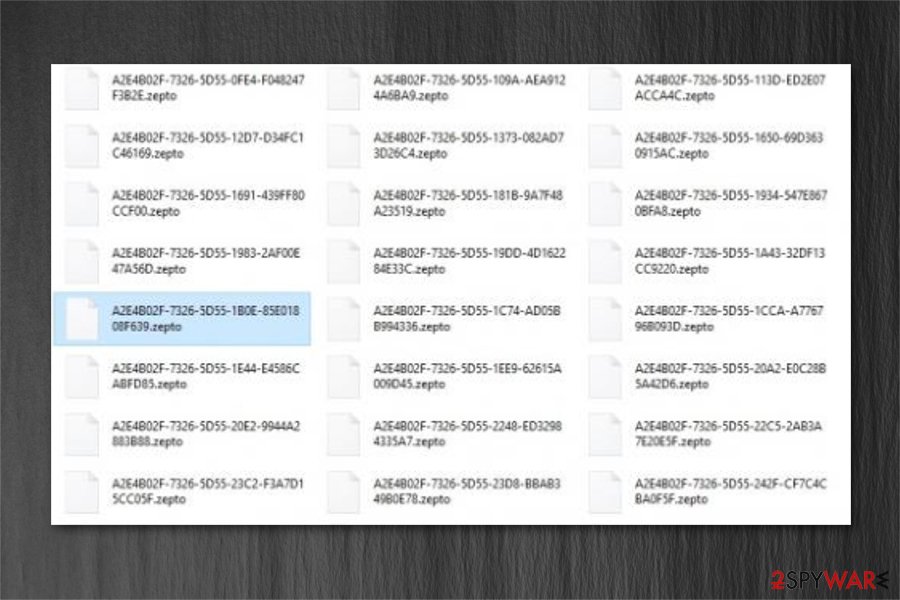 Files encrypted by Zepto ransomware are appended with .zepto extension at the end of the filename.

Zepto is not as advanced as its previous version. However, security experts have already started making the virus decryption tool which should be quite similar to Locky decrypter and should show up anytime soon. This virus was, and still is, one of the most powerful ransomware variants and none of the malware researchers attempts’ to create a decryption tool for it were successful. 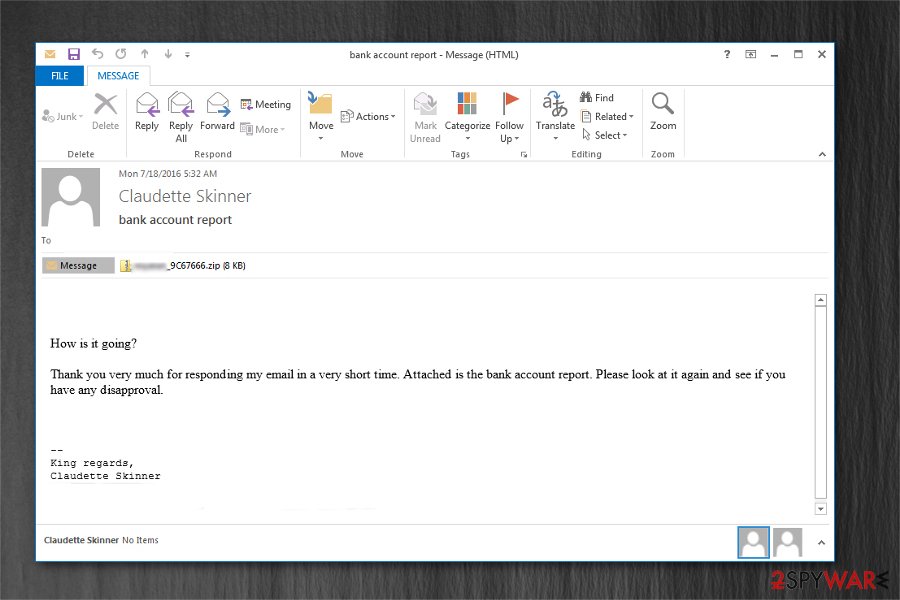 Victims receive innocent-looking emails from non-existent people with malicious attachments which are holding the payload of Zepto ransomware.

Unfortunately, it seems that these cybercriminals know what they are doing, and they do take advantage of their programming skills because their malicious programs appear to be uncrackable. If you are reading this article and your computer is not infected yet, please follow these rules to protect your computer from this ransomware and avoid a need to deal with Zepto removal:

Such malicious code can be activated via Word Macros function or by launching JavaScript file, so make sure you don’t do that in case you see a scrambled text after opening Word document that you have received via email. 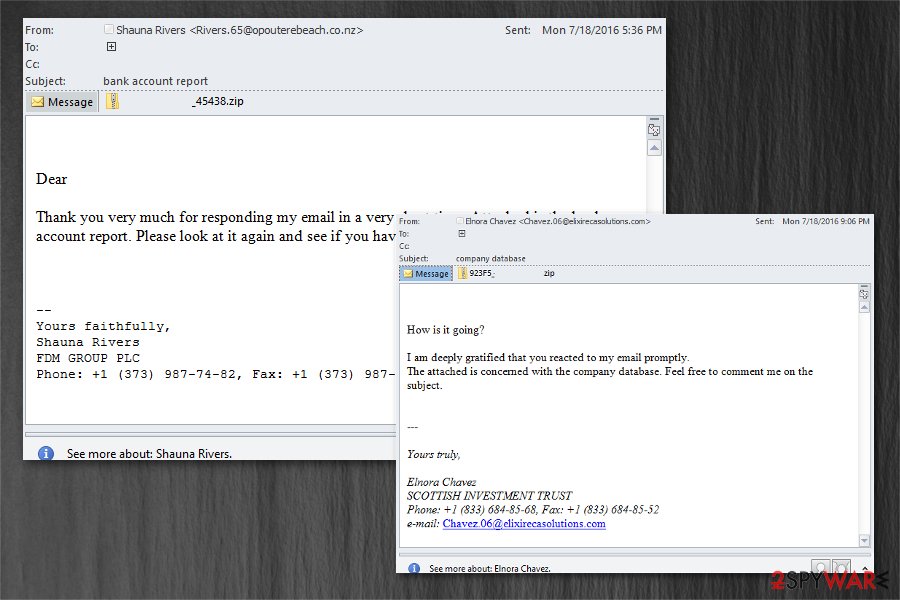 People are tricked to infiltrate their systems with Zepto ransomware via malspam campaigns.

Criminals also send JS files, which can be activated just by opening them. In addition, though such method is not widely practiced, but beware of exploit kits. They might be trojans, rogue malware or any malignant files.

By passing themselves off as legitimate files they might slip into the system and then launch Zepto when the time comes. In order to decrease the possibility of such malware attack, do not forget to update your security applications daily.

In general, we recommend you to avoid clicking or opening any kind of content online if you are not sure if it is secure. Cyber criminals use numerous techniques to deceive computer users, and it can be hard to keep up with the news and know all sources of infection.

Users who want to remove Zepto ransomware should keep in mind that this cyber threat is highly dangerous. Not only it can trick you into uninstalling essential system files but also let other malicious programs inside your computer. Thus, follow the instructions to get rid of this file-encrypting virus safely.

Zepto removal requires advanced IT knowledge. Likewise, we recommend you to get help from professional antivirus tools, like Reimage Reimage Cleaner Intego, or Malwarebytes. They are designed to identify and locate all ransomware-related components to clean your entire computer system.

Once you get rid of Zepto ransomware, you will be able to proceed to data recovery. You can decrypt files with .zepto extension using an official decryption tool. It is presented at the end of this article alongside alternative solutions to retrieve compromised information.

Ensure that the virus won't block an antivirus software by rebooting your PC into Safe Mode with Networking.

Guide which is presented above is supposed to help you remove Zepto from your computer. To recover your encrypted files, we recommend using a detailed guide prepared by 2-spyware.com security experts.

If your files are encrypted by Zepto, you can use several methods to restore them:

Use Data Recovery Pro to recover your files encrypted by Zepto

Originally, Data Recovery Pro was created to retrieve the files after an unexpected system crash or simply after the careless elimination of the files. However, you can also try using it to recover your important files.

You should be able to recover the data using Windows Previous Versions feature if the System Restore was enabled on your computer. For that, use the following guide:

One of the main features of Locky and its “cousin” Zepto, which helped it to retain the title among ransomware threats, is its ability to locate and delete the volume shadow copies. They are automatically created by the operating system in case a system is crashed unexpectedly. However, you should still try to recover your files encrypted by Zepto with the help of these steps:

You might launch this utility to decode the files affected by Zepto.

Finally, you should always think about the protection of crypto-ransomwares. In order to protect your computer from Zepto and other ransomwares, use a reputable anti-spyware, such as Reimage Reimage Cleaner Intego, SpyHunter 5Combo Cleaner or Malwarebytes

You can quickly scan the QR code with your mobile device and have Zepto virus manual removal instructions right in your pocket.