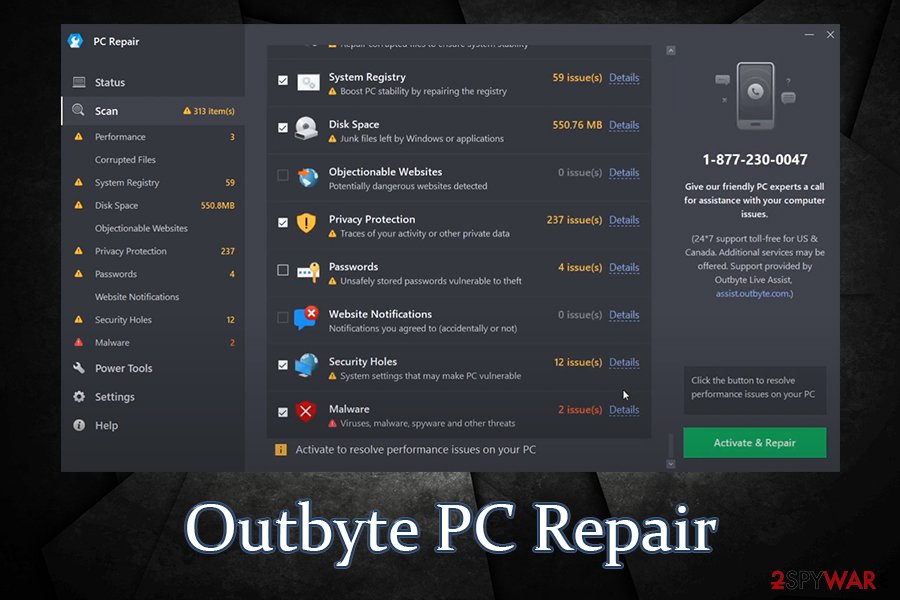 Outbyte PC Repair is a potentially unwanted program that claims to be able to fix performance issues, protect privacy, report unsafe passwords, remove malware infections, etc. While most applications of such type spread via software bundles or their official websites, this PUP might be delivered with the help of fake Windows or Flash Player prompts – a method typically used by malware. Nonetheless, developers recently posted a message claiming that rogue distribution tactics were the fault of the affiliates.

As soon as Outbyte PC Repair is installed, it will perform a full scan, which will check invalid entries, junk files, and other parts of Windows. After the scan is complete, users will be suggested to fix all the found problems. Unfortunately, the shown scan results might mislead users, as they typically show hundreds of found entries – it can mislead users into believing that heir computer health is poor. In other words, while Outbyte PC Repair itself is not malicious, it can be misleading, and there are better optimization tools out there.

If you need a reliable application that can fix issues on your PC, remove Outbyte PC Repair as explained below and employ Reimage Reimage Cleaner Intego instead, as it does not use rogue distribution tactics like the former.

While many potentially unwanted programs typically collect a variety of data about users, Outbyte PC Repair seems to be doing well in this regard. Even though some limited amount of data is collected during the purchase of the product, this data is not shared with other parties, as explained in the Privacy Policy:

Outbyte Computing Pty Ltd. does not sell, rent or lease the collected information or part of it to any third party.

While the functionality of the Outbyte PC Repair might be useful in some cases, the way found problems are marked is not adequate. During our tests, the scan results found over 6.4k entries, most of which revolved around registries that have no impact on computer performance whatsoever.

Furthermore, there were many more results that can be considered dubious, to say the least, e.g., legitimate websites like scamwatch[.]com or onetrust[.]com were marked as “Misleading claims or unethical,” imgur[.]com was detected for “adult content,” even the browsing history was marked for deletion and found as an “issue.”

As previously mentioned, such a display might mislead users and make them believe that their machines are more damaged than they actually are. In many cases, users will see that they have hundreds of issues on their computers, despite that most are relatively minor or even harmless.

The following sections are checked and repaired by Outbyte PC Repair:

Possibly the biggest mess-up by Outbyte PC Repair is its distribution techniques. In most cases, when users land on suspicious websites, they are shown a fake warning or a popup, which claims that something is outdated, or that their computers are infected with viruses and need repairs. The campaign that was used to distribute Outbyte PC Repair showed users system-like notifications that impersonated the Windows update window and also claimed that the system is missing cumulative updates. Rogue? Without a doubt. Outbyte Computing Pty Ltd. claimed that this occurred due to its affiliates. 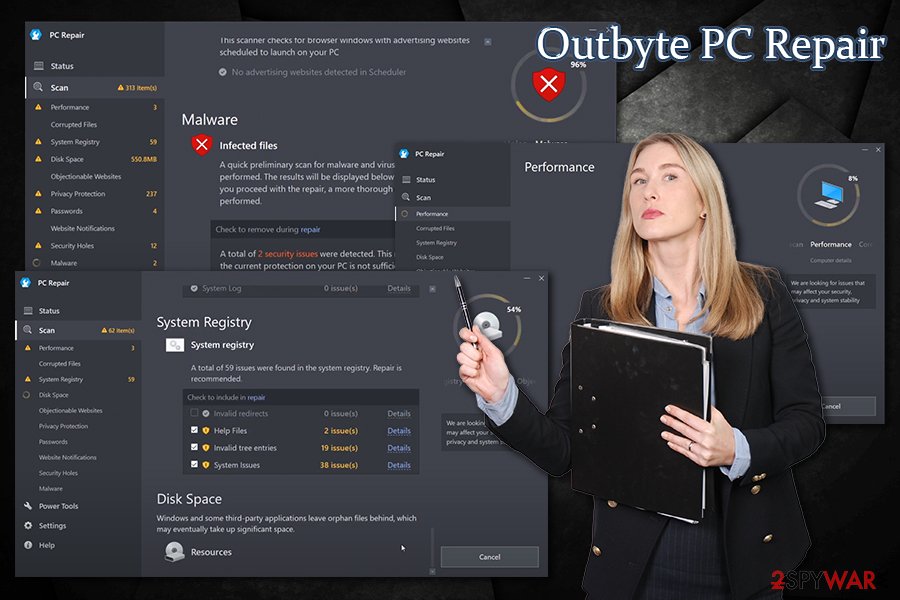 However, companies that develop software should be aware of whom they partner with, and blaming rogue affiliates for everything is just plain wrong. Fake updates for Windows and Flash Player are not adequate methods to advertise software and, while it will increase the count of downloads, as well as profits for the developers, it will diminish Outbyte PC Repair reputation greatly.

For Outbyte PC Repair removal, check the bottom section of this article. If you see any adverts after its termination, you should also reset the web browsers are explained below.

Watch out for fake update prompts and software bundles

While many potentially unwanted programs can be downloaded from their official websites, it is not mostly how users download them. Quite often, companies employ affiliates that run ads on specially crafted websites, and some of these websites can be less than secure. Mostly, users are displayed fake messages about their computer health or that an update of particular software, as well as the operating system, is required. However, this is all scam to make them download and install the offered app – affiliates receive a commission for every of such downloads.

Therefore, it is in their best interest to make users download the software. In other words – a higher volume of downloads, higher payments from the app developers. Unfortunately, some of the programs distributed in such a way might be straight out malicious or serve as a backdoor for malware. Thus, it is important never to download anything that is offered through rogue messages claiming that the computer is infected with viruses.

Another marketing technique that is often employed by developers is software bundling. In most cases, software bundle packages are downloaded from third-party websites that offer freeware. Similarly, as in the scenario described above, website authors receive a commission for additional applications that are installed on users' systems. While this technique is by far more legitimate than fake update prompts, it is deceptive nevertheless.

During the installation process, users can often pre-ticked boxes, misleading offers, misplaced buttons, fine print text, and similar tricks. Besides, optional components are often hidden under Advanced/Custom settings, so if Recommended/Quick mode is chosen, users will install PUPs without noticing it in the first place. 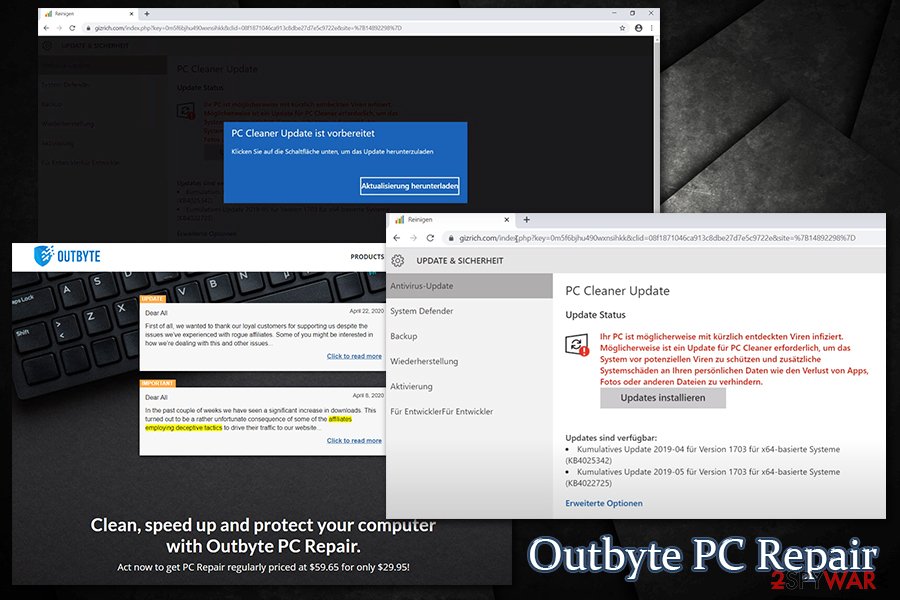 Delete Outbyte PC Repair if you did not install it intentionally

There should not be any difficulties when trying to perform Outbyte PC Repair removal. All you have to do is access the Control Panel and then reach the list of the installed apps – you can uninstall the program from there. If you need a detailed step-by-step guide on how to do that, please check the instructions below. For smooth termination, you should also shut down the running process PCRepair.exe via the Task Manager, which you can call up with Ctrl + Shift + Esc keyboard combination.

If you are satisfied with the app and you did install it intentionally, you do not have to remove Outbyte PC Repair from your computer. In the end, it can remove certain issues and possibly make it more secure, increase disk space, etc. Nonetheless, you should also check what precisely is deleted manually by clicking “Details” next to scan results, as you don't want to delete something that you actually need.

To remove Outbyte PC Repair from your Windows machine, follow these steps:

Get rid of Outbyte PC Repair from Microsoft Edge

Once these steps are finished, Outbyte PC Repair should be removed from your Microsoft Edge browser.

Chrome reset is not mandatory, but it might be needed if you see an increased amount of advertising, even if you deleted all potentially unwanted programs from your system:

You can quickly scan the QR code with your mobile device and have Outbyte PC Repair manual removal instructions right in your pocket.