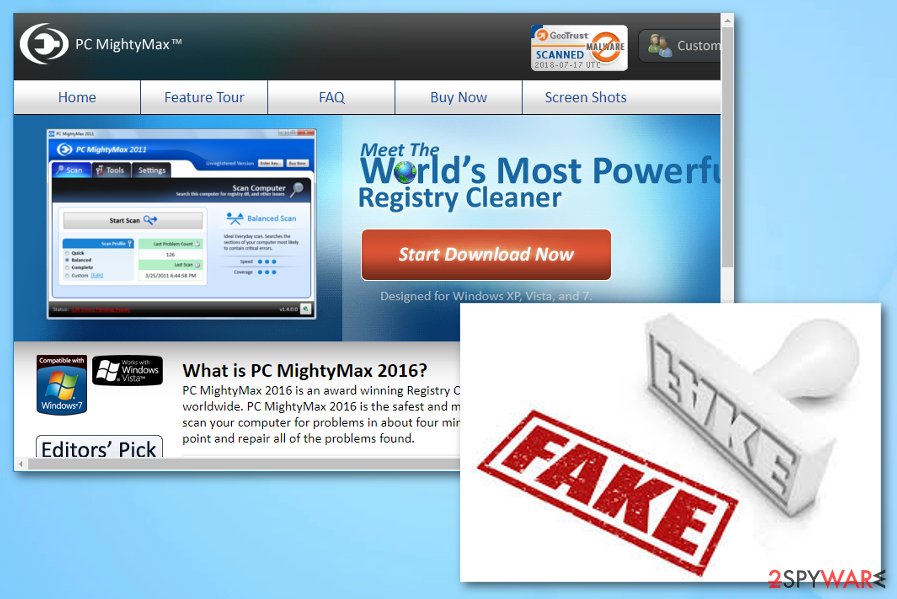 PC MightyMax is considered to be a fake optimization tool which displays only fake warnings during its activity on victim's system. Such program can infiltrate the system stealthily or you can download it from its official website. Once inside the computer, it starts producing numerous warnings about various system threats and infections. However, all of them are false because PC MightyMax has no virus database and cannot detect any threat or PC-related issue. All these errors it displays are showed just to gain income from PC users. Developers collect revenue from people who fall into believing that they need to buy the full version of this harmful.[1]

The main functionality of PC MightyMax is quite annoying because it starts system scans to “detect” various threats each time the PC is rebooted. Additionally, it starts showing you numerous alerts announcing about numerous computer infections. If you leave the sound on, it might even produce beeping sounds while active.

Although such fake fixing program claims to be “trusted by over 8,000,000 users worldwide”, all this is due to trick users into downloading such hazardous software on their computers. If you ever encounter this app and its notofications[2], be careful and do not fall for it as numerous gullible users have already done. Even more, do NOT buy its license as it is a straight way to the money loss and identity theft.

If you want to stop the annoying activity, you need to remove PC MightyMax virus from your computer the same minute you spot it. For such purpose, you can uninstall the app manually or rely on anti-malware tools. We advise using ReimageIntego or any other reliable anti-spyware to doublecheck the system and make sure that errors reported on your computer are fake. The antivirus program will also help you with PUP's removal.

There are lots of similar PC optimization tools that are fake. You should ignore their fake warning messages and get rid of them without wasting the time. Otherwise, they may start tracking your browsing routine and fill your favorite websites with fake warning messages.

PC MightyMax removal is the only way to stop the false warnings caused by this PUP. They bring no real value to the user and just interrupt your activity by interrupting you while you are using your computer. 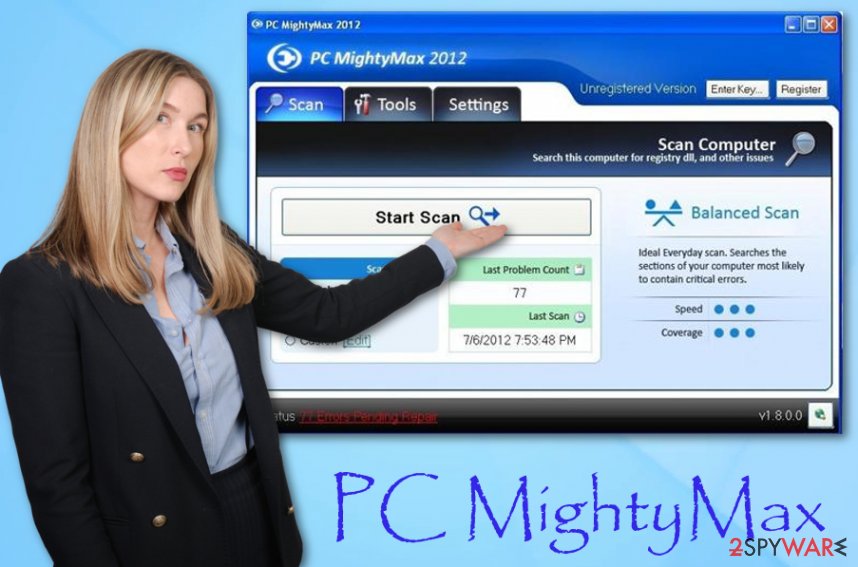 PC MightyMax virus is a fake cleaning tool has a purpose to collect revenue from gullible users by convincing them to buy the full version.

According to cybersecurity professionals[3], PUPs such as fake cleaning tools enter the system through other legitimate programs. They come bundled within them without any clear notice due to the users' careless behavior. When downloading regular software, people might rush or skip thru installation steps.

To avoid various infections, go to the Custom or Advanced section while installing freeware and shareware on your computer. Then, opt out of all unnecessary components that are typically presented as optional.

Fake PC optimization tools can also be downloaded from their original sites. Here, they are presented as legitimate and trustworthy tools. However, you should always read several reviews about the app before installing it on the system.

Some other ways used for the distribution of PUPs are various ads that interrupt people while they are browsing the Internet. Once you click on such content, it redirects you to a fake page used to promote useless apps and goods. Better stay away from questionable sites and leave them if any of them occurs in your way.

To remove PC MightyMax virus you need to download and install anti-malware. Such professional help is required if you want to get rid of the cyber threat permanently. You should take care of the process as soon as you spot the fake optimization tool on your system.

Furthermore, to avoid damaging consequences that are typically caused if PC MightyMax removal is not initiated, you need to make sure that no PUP-related components are left on your system. For this reason, open Task manager and run thru your apps. Guiding steps will help you doublecheck your system.

To delete PC MightyMax from your Windows OS, follow these steps:

After uninstalling this potentially unwanted program (PUP) and fixing each of your web browsers, we recommend you to scan your PC system with a reputable anti-spyware. This will help you to get rid of PC MightyMax registry traces and will also identify related parasites or possible malware infections on your computer. For that you can use our top-rated malware remover: ReimageIntego, SpyHunter 5Combo Cleaner or Malwarebytes.

You can quickly scan the QR code with your mobile device and have PC MightyMax manual removal instructions right in your pocket.