Phobos ransomware is the dangerous cryptovirus that spreads around as a processhacker-2.39-setup.exe executable 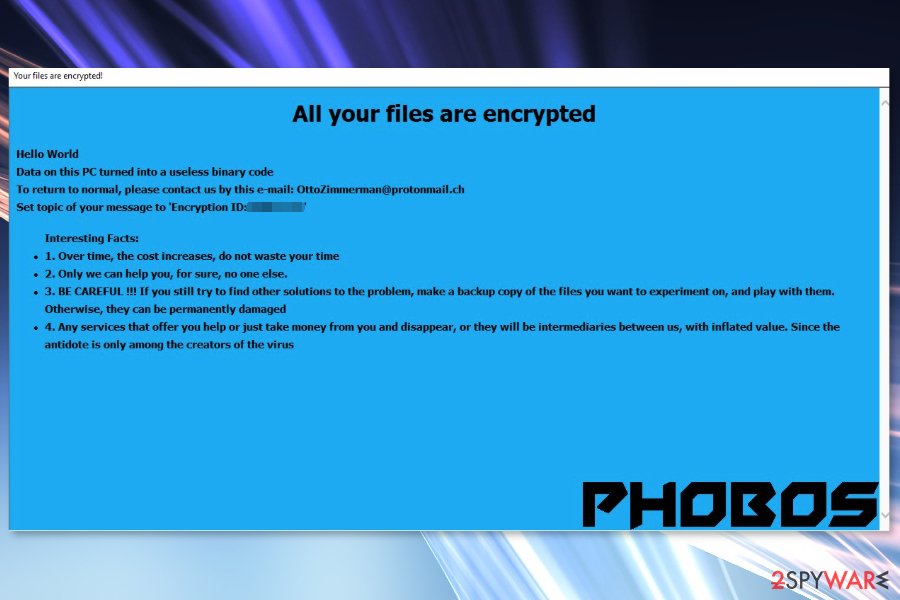 Phobos ransomware is a file locker that first emerged in 2017. Nevertheless, malware came back a year later with two new variants.

Phobos ransomware is a cryptovirus that resembles a large Dharma family and was discovered by security researchers back in October 2017. Since its initial release, malware went under the radar for more than a year, until new variants started emerging at the end of 2018 and 2019. Initial infection used .[ID].[email].PHOBOS file extension and a Phobos.hta note asking victims to email virus developers via OttoZimmerman@protonmail.ch to find out the amount of ransom that needs to be paid in order to retrieve access to locked data.

Later versions kept the extension .phobos, but used different contact addresses, along with the composite extension. The most recent contact emails changed to ofizducwell1988@aol.com and fobosAmerika@protonmail.ch. Currently, Phobos virus is actively attacking users all around the world, asking for as much as $5,000 ransom in return for the decryptor. It still remains active in summer 2019 – the more recent versions are Actin ransomware and Mamba ransomware.

Phobos ransomware virus mostly spreads via malicious spam emails[1] or fake installers[2] (processhacker-2.39-setup.exe) for applications like Process Hacker 2. Once inside the computer, it starts scanning the system, targeting the predetermined file extensions.

In the Phobos virus ransom note, criminals explain that the information stored on the affected computer was “turned into a useless binary code.” In order to make victims to follow the ransom payment instructions, crooks tell that other third-party data recovery services will not help them.

However, they might take the money and disappear. Though, this situation is most likely to happen if you contact and transfer the money to authors of the Phobos ransomware virus. Cybercriminals are not eager to help you because the only focus is getting money from the victims.

Over the course of December 2018 and February 2019, hackers released numerous new variants, which use different emails, including: 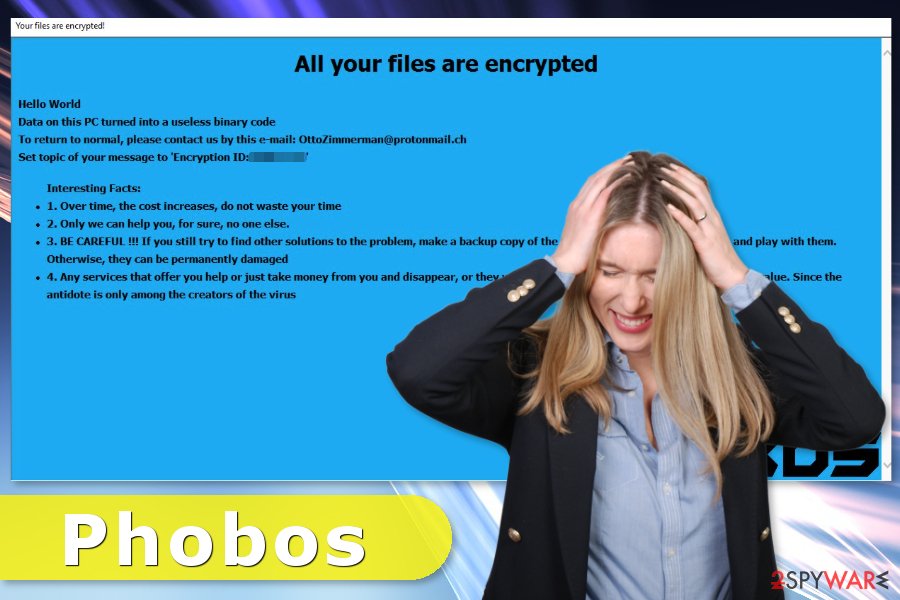 Once all files are encrypted, Phobos ransomware virus delivers a ransom-demanding message.

2019 came with even more news about Phobos virus because the ransomware started exploiting weak security to attack users all over the world.[4] It also targets businesses and large companies since these attacks ensure bigger profit from a single victim.[5] Badly secured RDP and other flaws used to enter the network and execute the malicious processes like file-locking and system changes.

Phobos ransomware developers varied their ransom notes, naming them Encrypted.txt and Data.hta. One of the latest messages states the following:

All your files have been encrypted due to security problem with your PC. If you want to restore them, write us to the email ofizducwell1988@aol.com

In case of no answer in 24 hour write us to theese emails: FobosAmerika@protonmail.ch
If there is no response from our mail, you can install the Jabber client and write to us in support of phobos_helper@xmpp.jp or phobos_helper@exploit.im

It seems like the virus is gaining success of receiving payments, as Phobos ransomware developers already received 3.5 BTC ($13,257 at the time of the writing) into their Bitcoin wallet.[6] It once again proves that the ransomware business model is extremely successful, and these type of infections will not go away anywhere. For that reason, using comprehensive security measures is a necessity. 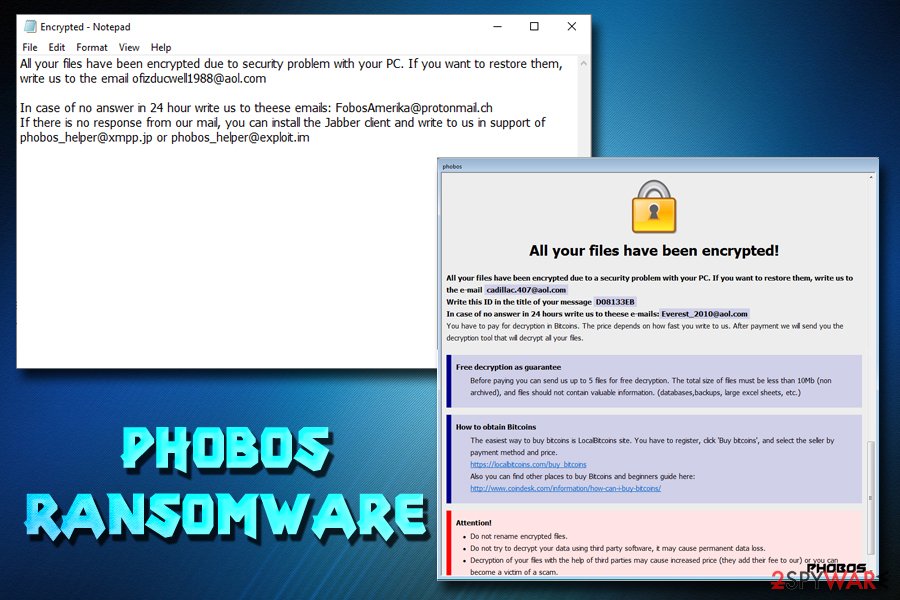 Hackers behind Phobos ransomware warn victims that, in case the ransom is not paid within a specific period, the size will increase significantly. However, cybersecurity specialists do not recommend contacting criminals and following their instructions because it might result in money loss.

If you got infected with the virus, do not panic, stay calm and focus on Phobos ransomware removal. Trojans and ransomware often operate together to proliferate even more malware on the machine. Thus, ransomware infection might not only damage your files but corrupt the system as well. These threats often install programs, files or other malware to ensure the persistence.

However, you should not try to eliminate malware-related files manually. To remove Phobos ransomware safely and successfully, you have to obtain a reputable software and terminate the virus within several minutes. As soon as malware is eliminated, we suggest you scan the machine with Reimage Reimage Cleaner as it can fix all the damage done by Phobos virus. 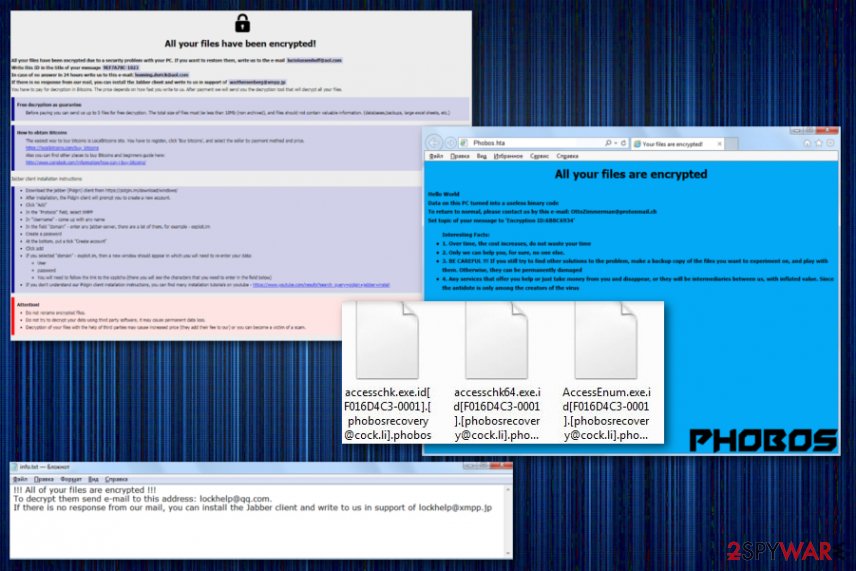 Phobos ransomware comes out with versions more dangerous than previous ones.

The virus that came out first in 2017 is known for cybersecurity researchers for a while now, so data encryption and other extortion- based functionalities are analyzed. It is believed that the malware mainly is distributed from Ukraine and that the developers mimic dome features from other crypto malware. Since October 2017, this family expanded and even though the virus mainly uses .phobos extension to mark the files there are more versions that users tend to think.

The first Phobos virus distribution month up until February 2019, delivered versions with the same .phobos file marker and only changed the contact information or names of the ransom notes. All the first variants looked similar to the Dharma ransomware because of the ransom message delivered as a hta program window and containing the thorough instructions about the payment. The full file marker added to encrypted files includes victims' ID and a full email address besides the .phobos at the end.

The ransom note for these particular versions differs from Encrypted.tx, Data.hta and contained pretty much the same message. The only few differences were particular countries where the versions got released. January 2019 found versions were more spread in Brazil than other countries.

The later ransomware variants throughout these activity years, including this .phobos marker, also mixed up the ransom note file names between Info.txt, info.hta, and encrypted.txt.

Frendi ransomware was the version that came out at the end of February 2019. This is the first version known to researchers that haven't marked files with the initial .phobos appendix. The particular file extension that lands on encoded files include the .frendi appendix and tlalipidas1978@aol.com contact email. The same email address also included as the name of the main executable with ransomware payload.

Later on, a few more .phobos versions got delivered and after that at the start of April additional Frendi virus variants with withdirimugh1982@aol.com contact email emerged.

.phoenix is a file extension that also appeared in multiple versions of the virus throughout the years. Like other versions, not much changed from the initial cryptovirus, this threat included a few different contact emails in the ransom notes and file markers. autrey.b@aol.com and Costelloh@aol.com, hickeyblair@aol.com are one of those. Ransom notes resembling Dharma family and marked with PHOBOS at the corner remained the same for years, while developers only changed the contact information and IDs per victim.

This .actor file appendix appeared once or twice in these Phobos virus campaigns, which is not common for the developers. One of these variants found in 2019, at the start of May, contained returnmefiles@aol.com on the file extension and delivered a text file name Encrypted.txt with a few sentences, as per usual. Although, the common HTA window was not delivered, according to some victims, this version was spotted at different times the same year with the same contact information.

Mamba ransomware came out with a few distinct features and an alternate name of HDD Cryptor. This virus was more dangerous because at first, it started targeting large businesses and attacking victims to gain large amounts via ransoms up to 70 000$. This was one of the versions that exploit unprotected RDP to infect the machines. Contact emails for this particular version are known to be fileb@protonmail.com, back7@protonmail.ch.

The version that again targets more PC users and individual victims –  Actin ransomware. This is one of many versions in this family, but the only one with the particular .actin file appendix. This threat also uses AES algorithm for the encryption process and demands victims to contact developers via kew07@qq.com to get their files back allegedly. All those claims shouldn't be trusted because these cybercriminals know what they are doing and they have no goal to help people. Actin virus also came out more than a few times and had different emails for each campaign, including upfileme@protonmail.com, thedecrypt111@qq.com. 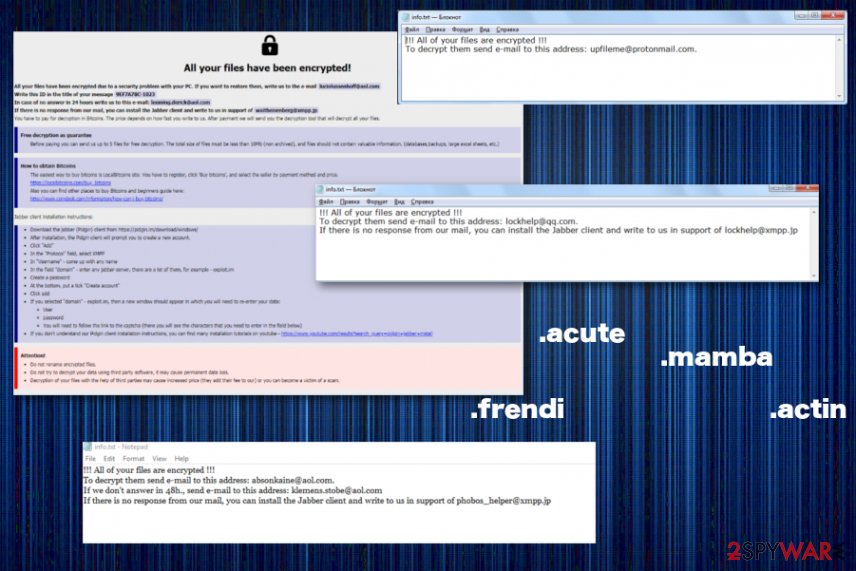 The slightly changed version from the previously described one, Acton ransomware was one of the less repeated variants int his Phobos ransomware family. Delivering the same info.hta program window with the payment instructions and contact information this time threat leaves out a ransom text file. Data encrypted by the virus get extensions including datadecryption@countermail.com.

The more recent versions in Phobos ransomware started to get more unique names and file extensions. Virus developers occasionally release variants with the original .phobos, but June 2019, in particular, was the month of new ransomware releases. .adage virus file marker comes in the traditional pattern .id[XXXXXXXX -1096].[lockhelp@qq.com].acute common for all the versions in Phobos family since 2017.

Distribution methods of the file-encrypting virus

The crypto-malware can get inside the device when a user clicks on a malicious link, opens or downloads an infected file. The malware executable can be included in the email or presented as a useful program in various torrents or download sites. Thus, users have to be careful and avoid questionable content online.

Trying to locate and wipe out malware-related files manually might end up with serious damage to the system. Therefore, we do not recommend risking to delete wrong files. It’s better to dedicate Phobos removal for the professionals. We mean, you should obtain a reputable malware removal software, such as Reimage Reimage Cleaner or SpyHunter 5Combo Cleaner, or Malwarebytes and get rid of the cyber infection automatically.

However, ransomware might be resistant and block security programs. For this reason, you should reboot the computer to the Safe Mode with Networking first in order to remove Phobos ransomware virus entirely. You can find the instructions below.

In order to run automatic malware removal, follow these steps:

These instructions can help to get rid of the virus with the help of antivirus software too:

Guide which is presented above is supposed to help you remove Phobos from your computer. To recover your encrypted files, we recommend using a detailed guide prepared by 2-spyware.com security experts.

Only backups can help to restore all files encrypted by ransomware. However, we highly recommend trying alternative third-party tools that might help to recover at least some of the lost data.

If your files are encrypted by Phobos, you can use several methods to restore them:

Originally, this software is designed to recover files after the system wreckage. However, it might be helpful after the ransomware attack.

Follow these steps to restore individual files after the ransomware attack (note: System Restore has to be enabled before the attack):

The Phobos virus should not delete Shadow Volume Copies, so this tool might be helpful:

Phobos decryptor is not available yet.

Finally, you should always think about the protection of crypto-ransomwares. In order to protect your computer from Phobos and other ransomwares, use a reputable anti-spyware, such as Reimage Reimage Cleaner , SpyHunter 5Combo Cleaner or Malwarebytes

You can quickly scan the QR code with your mobile device and have Phobos ransomware virus manual removal instructions right in your pocket.