This computer is blocked – a pop-up scam that imitates Microsoft 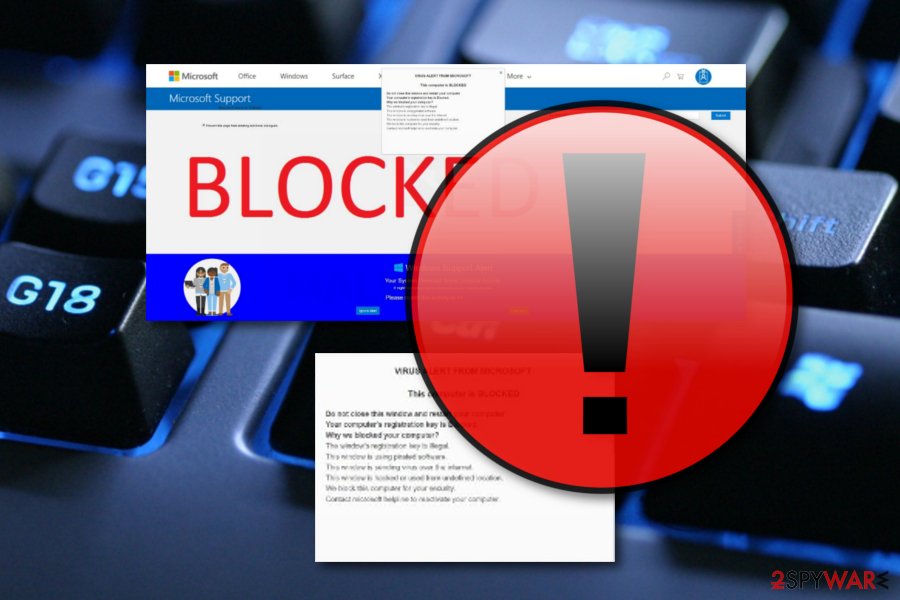 This computer is blocked is adware-based content that gets inside system unnoticed and tries to convince people to call the fake tech support line. This new example of tech support scam locks affected computer’s screen and delivers a fake security message that falsely informs about blocked computer due to detected unusual activity on the PC. The lock-screen also states that the computer has been infected with viruses and has been blocked due to security measures. In order to fix this issue, victims are asked to call nearest Microsoft Technician via the given mobile phone number. This computer is blocked lock screen message might trick and convince many computer users that it’s a real notification from Microsoft.[1]

If you take a closer look at the message, you may find spelling mistakes that should reveal the crooks. Thus, calling the provided number is not recommended. Scammers might try to get your private information, get access to your computer or convince to purchase the bogus software. Indeed, your computer might be infected and need to be taken care of, but you should focus on This computer is blocked removal only.

“This PC Has Been Blocked” virus might make system modifications in order to start itself automatically every time the user reboots the computer. Thus, when you turn on the computer or log in to your account, the virus delivers a lock screen that prevents from accessing the desktop. The suspicious program might also be capable of disabling Task Manager[2] and other Windows services to make access to the computer more complicated. This is how the misleading text looks like:

However, malware researchers found a few ways that help to unlock the screen and remove This computer is blocked from the system with the help of Reimage Reimage Cleaner Intego or other reputable malware removal program. Additionally, you can delete the adware application or another dubious application that is causing the appearance of this pop-up by using our manual step-by-step guide that has been provided at the end of this informative article.

However, you should identify the cause of this scam first before you start eliminating it as there might be no potentially content that has been forcing the This computer is blocked pop-up scam to appear. Similar scamming apps can be met on suspicious-looking websites and provided just as an additional pop-up notification or as a redirect. Prevention of these ads might be very simple, all you need is AdBlock[3] on your web browser. 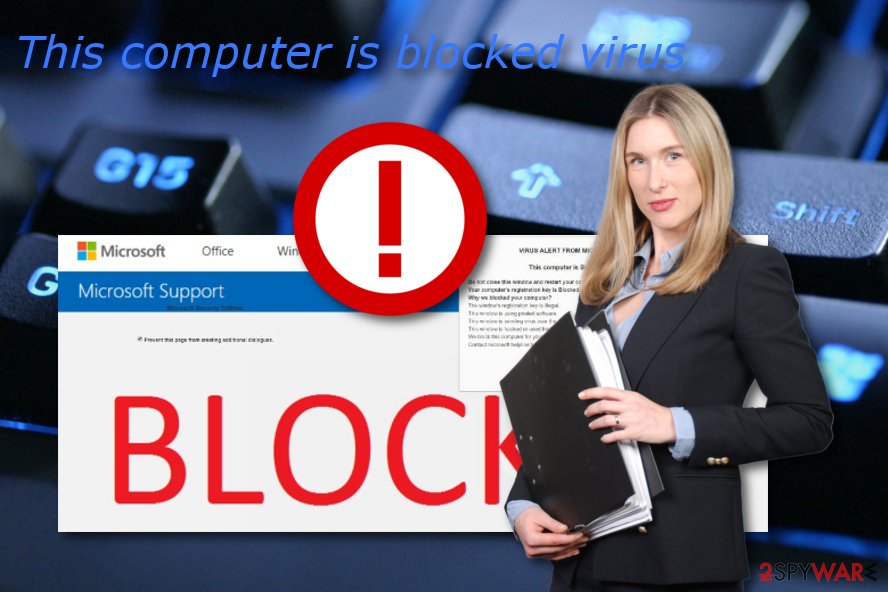 If an ad-supported program is the guilty one for all of this scamming activity, the situation might be a little bit more difficult as adware programs have the capability of pushing a big number of pop-up ads, including This computer is blocked. Moreover, these potential threats are known for their redirecting activities that can take the computer users to affiliate websites and infect their computer with malware through infection hyperlinks/advertisements.

Getting back to This computer is blocked, we want to say that you should not postpone the elimination of this pop-up. You should take all actions possible to get rid of it from your computer screen. Be aware and do not call any given phone numbers and do not provide any sensitive details for these fake technical experts. If you do, you will supposedly regret it in the future as private information is very easy to misuse nowadays. 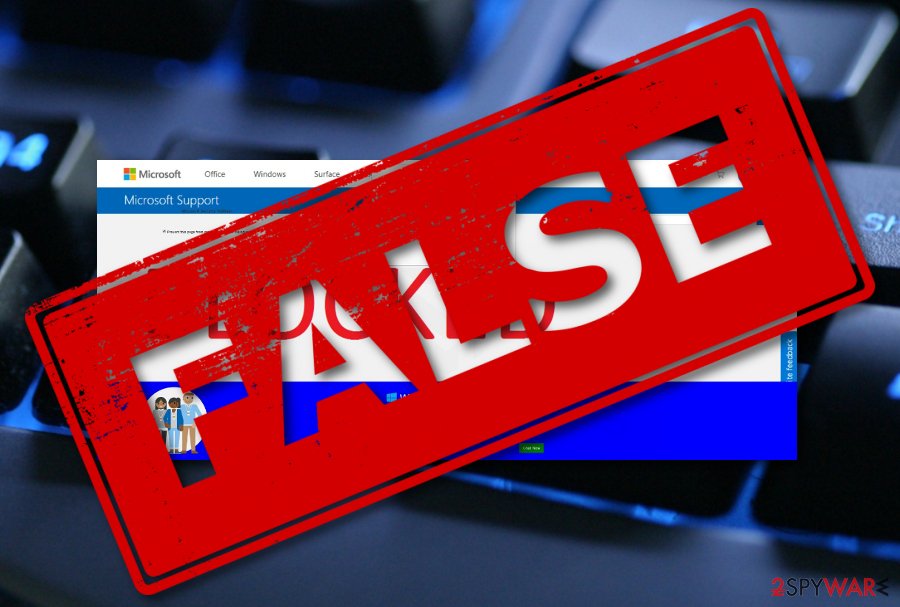 Due to the increasing popularity of Mac machines and devices, hackers are not sleeping and creating more and more threats that can be launched in Mac systems. As we have already mentioned about This computer is blocked pop-up scam, developers have released a very similar version named This Mac computer is blocked that targets Mac operating systems.

Creators also announced potential danger and claim that the entire system has been locked due to safety measures. These people urge not to restart the computer or even more harm will be planted. Instead of taking actions on their own, users are convinced to call the fake technical support number for help to fix the issue. 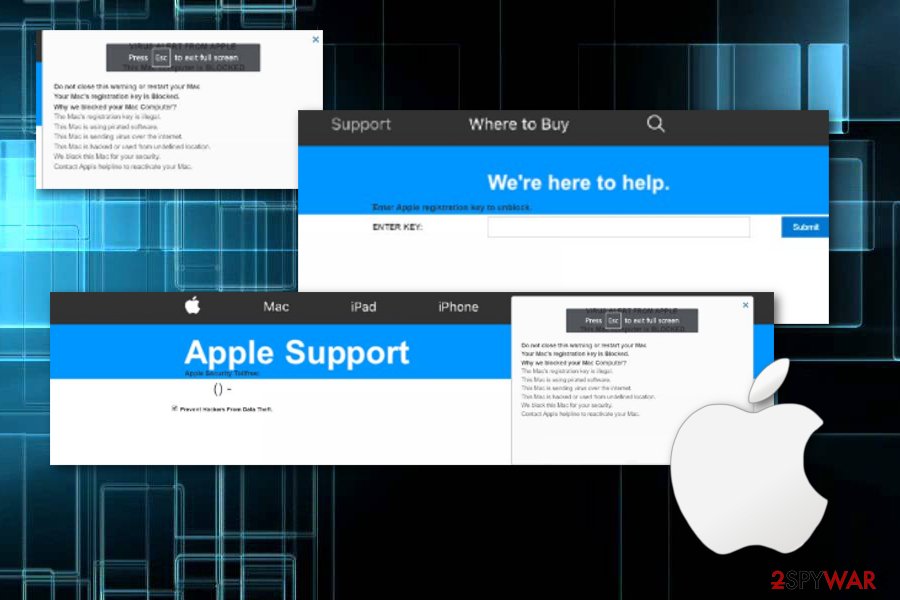 This Mac computer is blocked is only another scary message that you should avoid believing. There is no need to call the fake tech experts as they might try to convince you to provide some private information about yourself or your computer system. The Apple logo is used here just to give a reliable look to the message but the original company does not have anything in common with it. If this scam appears on your computer system, you will receive this type of message:

According to computer experts,[4] you can easily run into a pop-up scam on a suspicious-looking web page. However, if adware has been forcing the appearance of a scam, these programs use stealth techniques to infiltrate the computer system. One of them is known as “bundling”.

“Bundling”[5] is a deceptive marketing technique when the developer injects suspicious content into software packages. When downloading the software, the user also installs the PUP. To prevent this from happening, you should use the configuration mode which offers Custom or Advanced installation.

Additionally, download strong antivirus software that includes a browser protection feature. This function bombards alerts on your computer screen whenever you are trying to visit a questionable website.

If you let scamming content to overflood your machine, you might find launching programs very troubling due to the CPU overuse that is caused by intrusive pop-up ads. Remove This computer is blocked virus from your Windows computer system and make sure that no adware-related content has been left in browsers.

If you want to, you can perform This computer is blocked removal by using the below-provided guidelines that will help you to get rid of the cyber threat and its cause from web browser applications such as Google Chrome, Mozilla Firefox, Internet Explorer, Microsoft Edge, and Safari. If your computer has been infected by the Mac version of this scam, you can find elimination instructions for OS X also.

To remove “This PC Has Been Blocked” virus, follow these steps:

Delete “This PC Has Been Blocked” from Windows systems

Get rid of scamming content from your Windows computer. Use these steps to complete such process:

Remove “This PC Has Been Blocked” from Mac OS X system

If the scam has shown on your Mac system, you can remove it by using this guide:

Uninstall “This PC Has Been Blocked” from Internet Explorer (IE)

Once these steps are finished, “This PC Has Been Blocked” should be removed from your Microsoft Edge browser.

Erase “This PC Has Been Blocked” from Mozilla Firefox (FF)

If you have spotted some rogue content in Mozilla Firefox, get rid of it with the help of these instructions:

Eliminate “This PC Has Been Blocked” from Google Chrome

Remove all suspicious objects from Google Chrome by using these guidelines:

Delete “This PC Has Been Blocked” from Safari

Your opinion regarding “This PC Has Been Blocked” virus Cancel reply

You can quickly scan the QR code with your mobile device and have “This PC Has Been Blocked” virus manual removal instructions right in your pocket.

Poll
How did you remove “This PC Has Been Blocked” virus?
3.7 % used phone support
11.25 % downloaded software
17.66 % used free removal instructions
65.24 % combined software and removal instructions
0 % used email support
2.14 % got answer using Ask us service
Your vote has been submitted!
Vote »
I have problems with “This PC Has Been Blocked” virus removal
View results »