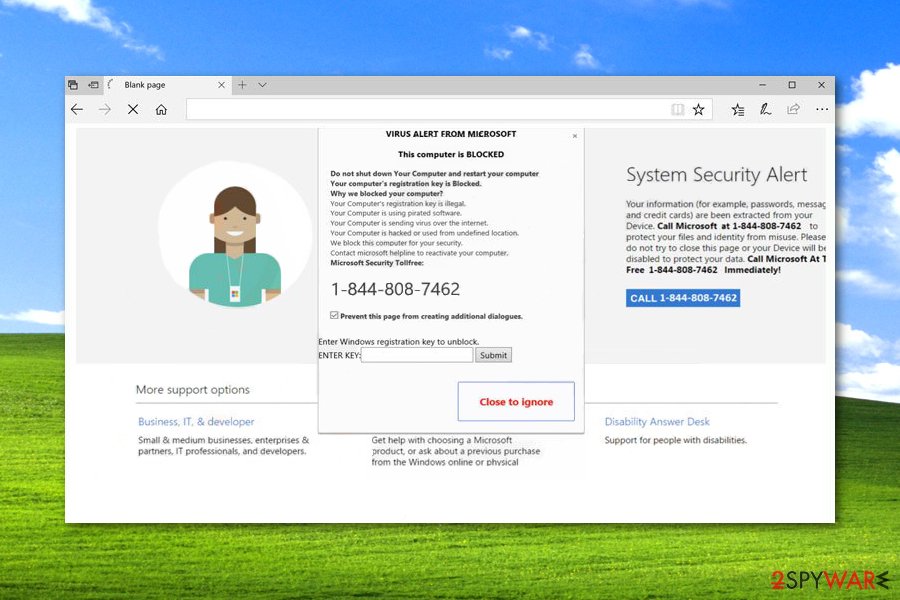 VIRUS ALERT FROM MICROSOFT is the social engineering attack based on scaring people.

VIRUS ALERT FROM MICROSOFT is the wide list of scams using the statement that the computer is blocked due to infection. Users get encouraged to call the toll-free number to receive help. However, this is one of the numerous technical support scams[1] pretending to be a real notification from Microsoft. Scammers are trying to convince their victims that their computers will be blocked if they won't contact Microsoft support to solve this issue.

In reality, this Microsoft Inc Warning is nothing but a fake alert used to swindle money from unaware PC users or even open up backdoors for additional hackers and malware. Instead of dialing their given number, you should scan your computer with an anti-virus program. This procedure will help you to get rid of adware which is responsible for causing VIRUS ALERT FROM MICROSOFT error.

The main purpose of VIRUS ALERT FROM MICROSOFT scam is to convince users to call a fake support line 1-844-808-7462 by telling them that their computers are in real danger. The pop-up message which is used to mislead people typically provides such information:

This computer is BLOCKED

Other version displays such warning:

System has been infected by Virus Trojan.worm!055BCCAC9FEC – Personal information (Banking Details, credit cards, and Account Password) may be stolen. System IP Address – is unmasked and can be accessed for virus spreading. Microsoft has reported to the connected ISP to implement a new firewall. Users should call immediately to Technical Support 1-844-507-3556 for free system scan.

Additionally, VIRUS ALERT FROM MICROSOFT tells that user’s privacy can be at risk too. The system security alert informs that passwords, messages, credit card information and other personal details have been stolen from the device, and only dialing the “Microsoft Helpline” can help to protect this data.

However, calling authors of VIRUS ALERT FROM MICROSOFT virus will cause problems only. Scammers might have numerous scenarios to get your personal information, install malware or gain remote access to your computer. [2] Later on, you might find yourself struggling to receive lost money back or fix severe computer damage after some type of malware attack.

Unfortunately, information obtained during such scams and attacks like VIRUS ALERT FROM MICROSOFT scam can get used in later campaigns like sextortion email attacks. During such, people get tricked into paying the ransom when scammers expose their passwords or real names to prove the danger.[3] However, emails, passwords, and full names can be stolen or leaked in previous incidents.

Additionally, you should not believe that it’s indeed a toll-free phone number that is shown on the alert. It might be just another lie that can literally cost you a lot. Instead of grabbing your phone, you should close the browser’s tab and make sure that you do not have additional adware installed on your PC. VIRUS ALERT FROM MICROSOFT can install other malicious content in the background. 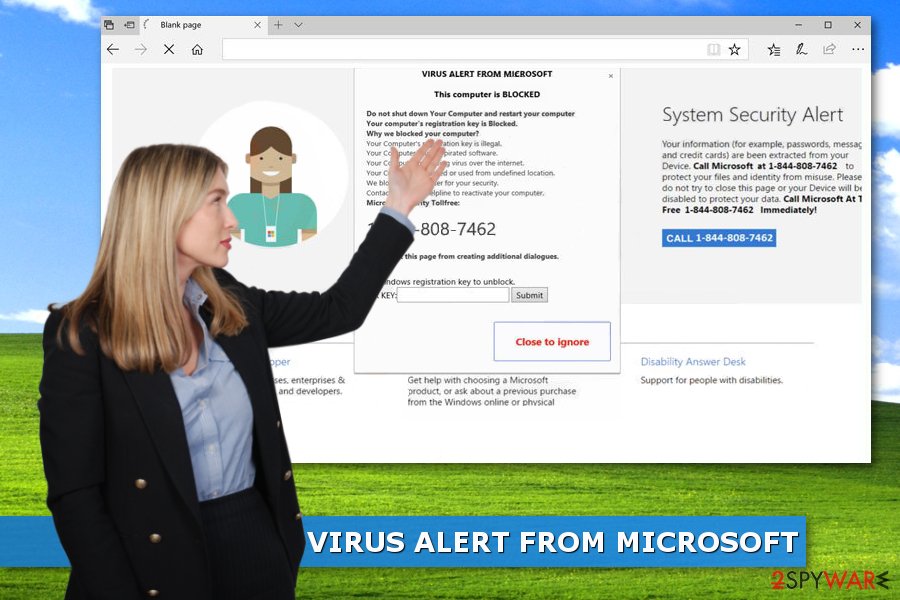 Main signs of the scam

Even though you have the possibility of meeting various scams on unsecured third-party websites, especially, secondary-downloading sources, gambling pages, and similar, typically, VIRUS ALERT FROM MICROSOFT scam starts appearing when an ad-supported application is installed on the computer. This potentially unwanted program (PUP) can be downloaded manually or can infiltrate the target device during freeware[4] or shareware installation.

However, if some adware-type program is the true reason why you are seeing VIRUS ALERT FROM MICROSOFT virus, be prepared to face even more annoying activities. Once inside, the adware virus not only starts redirecting its victim to scammers' website but might also:

Therefore, you have to remove VIRUS ALERT FROM MICROSOFT from the computer to protect your browsing sessions. Note that the adware program can be deleted manually. However, it might be a complicated task because it may have installed a bunch of helper objects, extensions or applications that are hard to detect.

For this reason, we recommend automatic VIRUS ALERT FROM MICROSOFT removal which will help make elimination easier. This method requires scanning the computer with powerful anti-malware software and optimization tools like Reimage Reimage Cleaner Intego. Once the AV engine detects all potentially suspicious objects in the machine, you can start performing the elimination process. You can then clean the machine using system software. 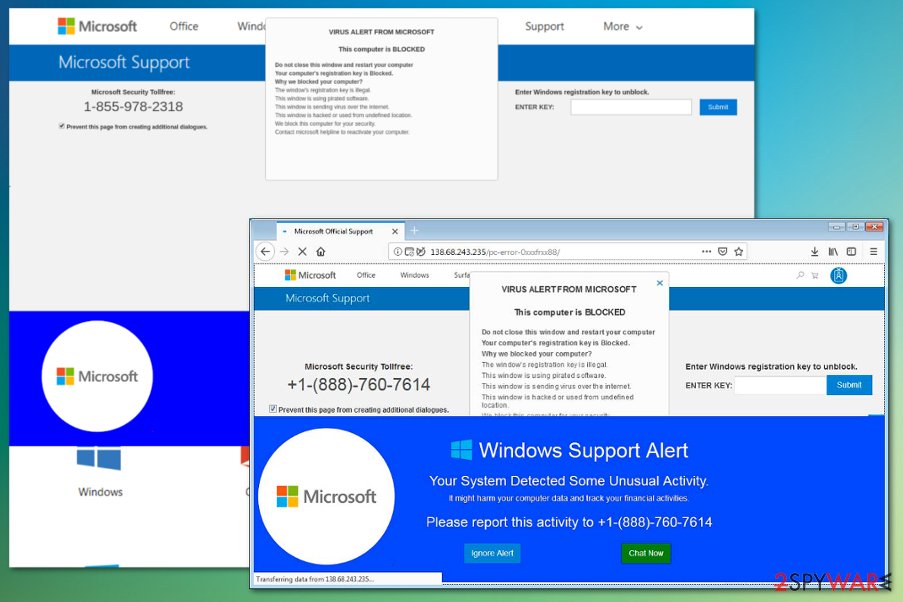 VIRAL ALARM OF MICROSOFT is a scam that is very similar to VIRUS ALERT FROM MICROSOFT. This technical support scam aims to place misleading pop-ups on the user's desktop and threatens the person that the machine got blocked for safety, virus distribution has begun, the Windows OS is hacked, computer data and finances may be at risk, and the only way to fix things and unlock the supposedly blocked machine is to make a call via the +1-833-272-0272 technical support number. Here is how the entire message looks like:

The registry key of the window is illegal.
This window uses pirated software.
This window sends virus over the internet.
This window is hacked or used from undefined location.
We block this computer for your safety.
Contact Windows helpline to wake up your computer.

Windows Support alarm
Your System Has Discovered An Unusual Activity.
It could harm your computer data and your financial activities.
Please report this activity an +1-833-272-0272
Ignore warning
Chat Well

VIRAL ALARM OF MICROSOFT is served by the 43.255.154.93 IP address and it also might support a related domain such as web-web-tec-host-err.xyz. You may have encountered this fake alert message while visiting third-party websites that lack recommended security. If this is the case, closing the window which is displaying the pop-up should be enough. However, in some cases, adware[5] might be secretly injected into your system and providing you with this bogus note. Check this possibility out by completing a full malware scan. 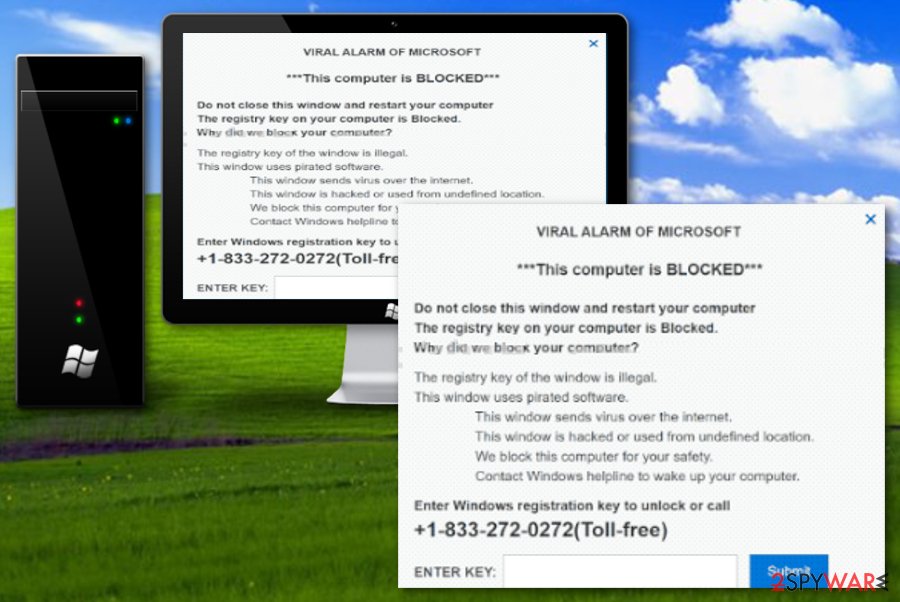 Make sure that you do not fall for any tricks that are provided by VIRAL ALARM OF MICROSOFT as all of its aims and goals are illegal. The developers only care to receive income from you which can be brought to them in many different ways. For example, if you decide to call the fake number, you will supposedly be asked to provide remote access to your computer system, buy some rogue security products, or reveal some personal information about yourself. All of these actions can lead to negative consequences such as:

An ad-supported application which is responsible for redirects to technical support scam website usually spreads as an optional component in freeware or shareware packages. It might be presented as a useful application or browser extension. However, soon after the hijack, it will start bothering you with its intrusive pop-ups and redirects.

Promotional advertisements that push allegedly useful and legitimate programs can also cause automatic downloads and installations of rogue tools. When such processes don't require your permission, you cannot notice the infiltration. To avoid the silent installation of unwanted apps, you have to use Advanced/Custom installation instead of Quick/Recommended settings.

The latter installer does not reveal third-party programs and installs them without asking the user’s permission. Meanwhile, the Advanced installer allows monitoring the processes and opting out additional apps. Besides, you should always keep an eye on what type of websites you are visiting. Make sure that all of them are properly secured and safe to proceed with.

To remove VIRUS ALERT FROM MICROSOFT from your computer, you can follow the instructions at the end of the article and lookup for adware. However, these potentially unwanted programs often drop bogus registry keys and similar components on the system which might be difficult to locate for less-advanced users.

If you want to speed up VIRUS ALERT FROM MICROSOFT removal, you should rely on a reputable anti-malware program. However, specialists from viruset.no[6] also suggest resetting each of the affected browser’s settings after system scan. This helps to delete tracking cookies and stop scammers from following your steps online.

To remove “VIRUS ALERT FROM MICROSOFT” scam, follow these steps:

If your browser continuously redirects you to misleading websites that are trying to swindle your money, you should lookup for adware on your PC. To get rid of it, make sure you remove all suspicious programs that you cannot remember installing on your system.

Once these steps are finished, “VIRUS ALERT FROM MICROSOFT” scam should be removed from your Microsoft Edge browser.

Uninstall suspicious extensions and reset Google Chrome as shown below:

Your opinion regarding “VIRUS ALERT FROM MICROSOFT” scam Cancel reply

You can quickly scan the QR code with your mobile device and have “VIRUS ALERT FROM MICROSOFT” scam manual removal instructions right in your pocket.