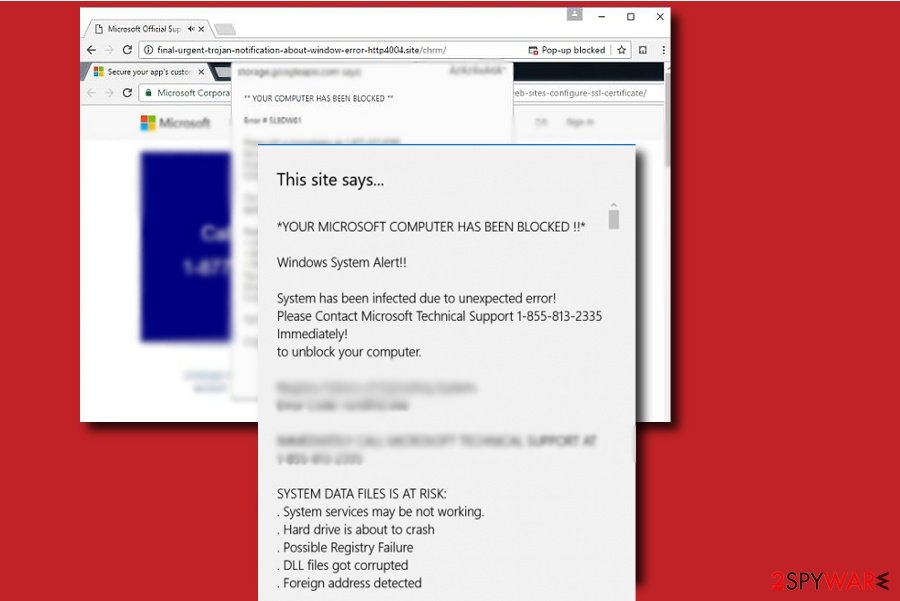 Microsoft Critical Alert (also known as Critical Alert from Microsoft) is scamware that hails from the huge group of viruses called Technical support scams. There are numerous malicious websites that have been misused by hackers to deliver the fake security alert claiming that the victim's system is dealing with issues due to some new error. The main aim of Critical Alert from Microsoft is to trick people and swindle money or personal information from them. Claims about system errors are just a provocation to contact the fake Microsoft Technical Support via the provided mobile phone number: 1-855-813-2335 or something similar.

To give a more terrifying look, the Microsoft Critical Alert scam site starts claiming that the computer has been locked and various personal or technical information might be in danger of exposure. Besides, when infected with such scamware, victim’s web browsers usually start launching phishing pages that are Microsoft Support page look-alikes[1].

A part of the Critical Alert from Microsoft message looks like this:

*YOUR MICROSOFT COMPUTER HAS BEEN BLOCKED !!*

System has been infected due to unexpected error!

to unblock your computer.

However, cybercriminals who distribute notes similar to Critical Alert from Microsoft can be easily recognized. Tech support scammers usually register domains that have something to do with words “security,” “alert” or “Microsoft.”[2] Besides, the alert is also full of grammar or spelling mistakes which would not appear if the message has truly been written by specialists. Thus, being vigilant helps not to get tricked by criminals.

The purpose of the Microsoft Critical Alert virus is to deceive people into calling tech support scammers[3]. Scammers might convince people into buying and downloading useless or even malicious security programs to delete detected spyware or other malware from the computer. Additionally, the “toll-free” phone number might be just a trick. The phone call might be extremely expensive. 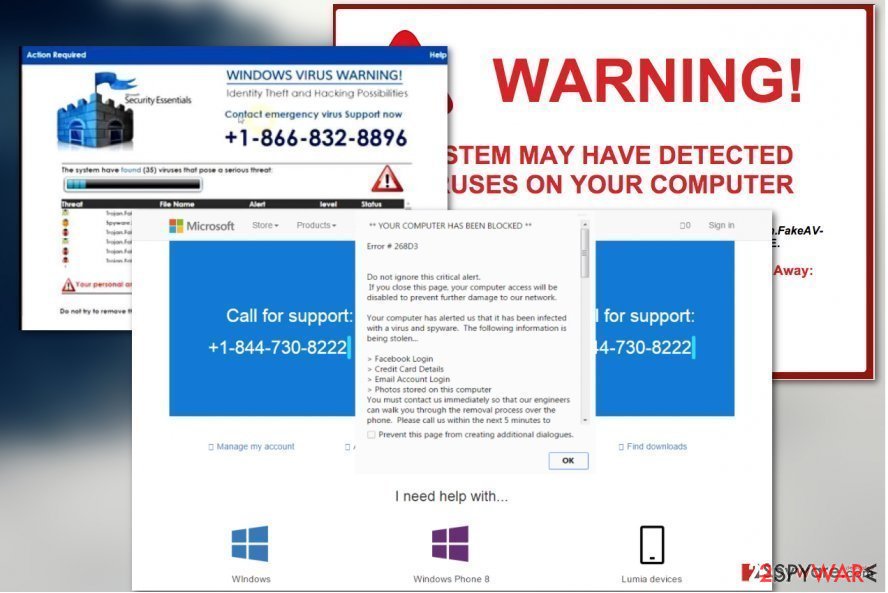 Nevertheless, you might be tricked into revealing some personal information about yourself and crucial technical details that can be misused in the future. If you ended up on this website once, it might be triggered by some site that forces these redirects. However, if the problem repeats, you should focus on Critical Alert from Microsoft removal which often looks like an adware program.

If one of these seems familiar, you should check what is hiding behind the scam. The full Microsoft Critical Alert removal requires revealing potentially unwanted apps that trigger such fake alerts on your web browser. For that, we highly recommend you to scan the system with Reimage Reimage Cleaner Intego or another anti-malware software to identify and remove Critical Alert from Microsoft.

Calling the number provided in Microsoft Critical Alert pop-up virus will only connect you with tech support scammers that will try to convince you that you need to fix imaginary problems using some rogue security software[4] they will suggest buying. All that scammers want to do is to either rip you off or place malware[5] on your computer by using revealed information for remote connection to the machine. 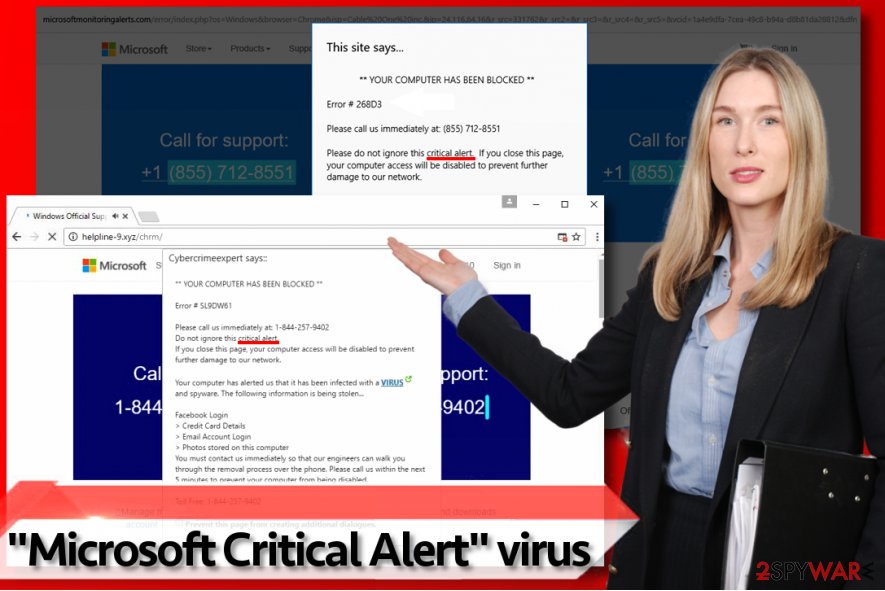 If you ever encounter Critical Alert from Microsoft on your Windows computer, you should find out from where this scamming message is coming. In some cases, such scamming content might start appearing on your machine if you are a frequent visitor of third-party sources. Entering these pages and clicking on them might cause redirects one of which might be exactly this type of scam.

If you have found out that the appearance of Microsoft Critical Alert has been caused only by phishing websites, you can try downloading an ad-blocking tool to your computer for notification prevention in the future. We suggest using browser tools such as AdBlock or Adblock Plus. However, if the scam keeps appearing very frequently, you should scan your computer for adware that might be displaying this message. 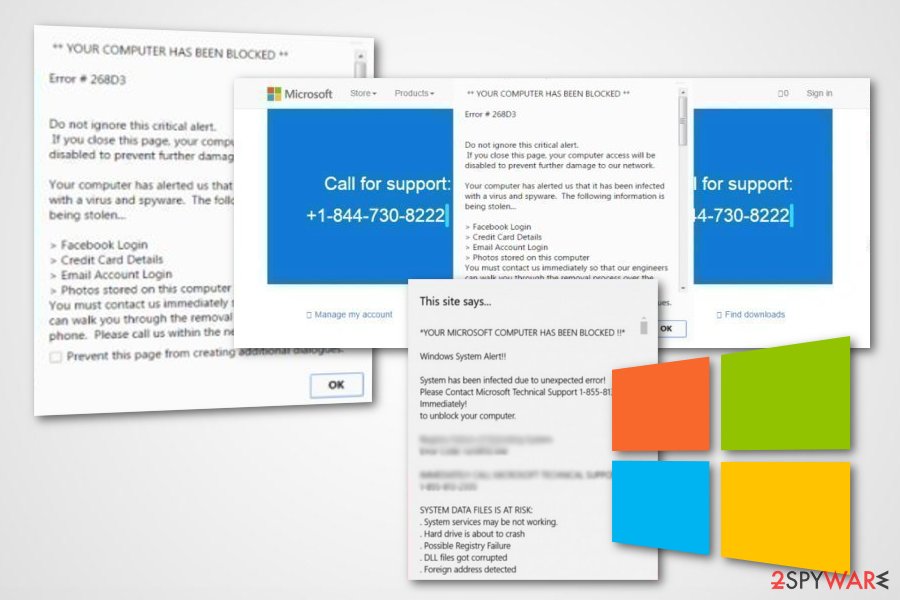 Scamming apps can be distributed via spam, however, in most cases, users install it alongside untrustworthy freeware. Thus, it is important to choose reliable sources to download software and adjust installation settings in the right way. Remember that you should always choose Custom or Advanced settings for installing software because they reveal all unexpected additions and allow you to drop them off if needed.

Do not believe that “recommended” software installation settings such as Default or Standard are the “right ones” only because the installer suggests choosing them. However, if you haven’t followed these security tips, you may have unintentionally installed some potentially unwanted programs that spread nasty scams. Thus, you should never forget such a precautionary measures in the future.

Continuously, Virusai.lt experts[6] claim that using reliable antivirus/antimalware protection will let you secure the computer system at a higher level. Furthermore, if the tool includes a safe browsing feature, you will be warned when trying to enter a possibly infectious website. Just note that all software needs to be updated once in a while and antimalware/antivirus tools are not an exception.

If your browser started displaying deceptive alerts and urge you to call toll-free helpline because, according to suspicious “Microsoft technicians,” your computer is all messed up, remove Microsoft Critical Alert virus immediately. Do not waste your valuable time calling the scammers – better check your PC with automatic malware removal tools.

Your antivirus or anti-malware software will detect a “Tech support scam” type virus instead of some suspicious Trojan that the phishing web page tells you about. The software takes only a couple of minutes to get rid of the infection. For Microsoft Critical Alert removal, we highly recommend using Reimage Reimage Cleaner Intego or Malwarebytes software.

Use these instructing steps to clean your Windows operating system from suspicious-looking content and get rid of all questionable processes:

Get rid of “Microsoft Critical Alert” from Internet Explorer (IE)

If you have found any suspicious extensions, add-ons, or plug-ins in your Microsoft Edge web browser, this type of content can be removed by following these instructions:

Once these steps are finished, “Microsoft Critical Alert” should be removed from your Microsoft Edge browser.

If there is any adware in your system, you might find infectious content in your web browser apps too. Clean Google Chrome with the help of these steps:

You can quickly scan the QR code with your mobile device and have “Microsoft Critical Alert” virus manual removal instructions right in your pocket.