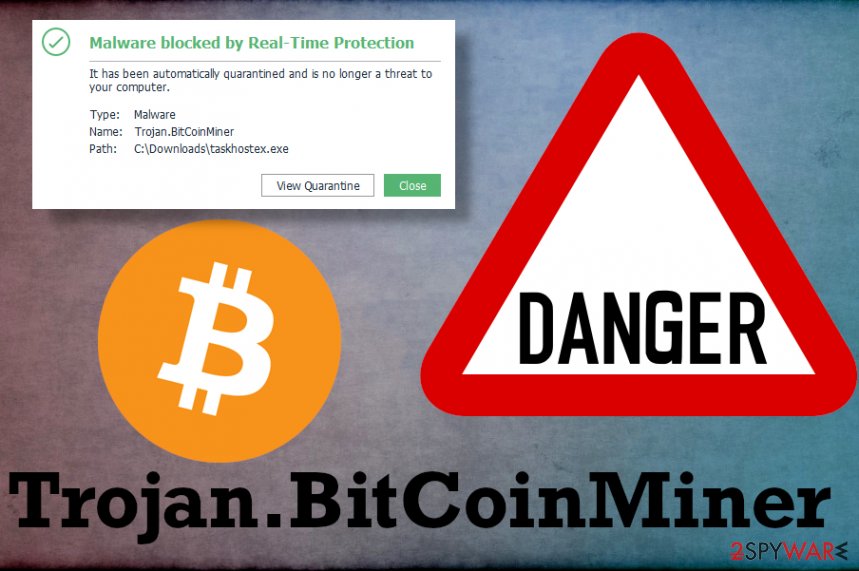 Trojan.BitCoinMiner is a detection name of a type of malware that belongs to the Bitcoin virus category. These types of computer infections are programmed to utilize hardware such as CPU or GPU in order to perform complex mathematical calculations, generating cryptocurrency in the process. While the practice itself is not malicious, and many users can run such operations on their systems if so desired, an app injected into the machine without permission is malicious and should be terminated immediately.

Upon infiltration, Trojan.BitCoinMiner performs a variety of changes on Windows machines and begins its malicious processes immediately. In most cases, the malware is set to operate as soon as users turn on their PCs. During this process, computers' fans are running at full capacity, and CPU usage jumps as high as 100%. Since the virus is programmed to deliver Bitcoin digital currency to cybercriminals' wallets, users themselves do not get any benefit from the mining process, but instead could suffer serious financial losses and even hardware component corruption.

Besides, if your security software flagged Trojan.BitCoinMiner on your system, there is a chance that there is a backdoor[1] installed on your machine. You need to fully determine the intruder and clear all the possible threats fully.

While the detection name indicates that this Trojan is designed to mine Bitcoin, it is not always the case. Trojan.BitCoinMiner can also abuse computer resources to mine Monero, Ethereum, Litecoin, and many others. Regardless of the currency type, however, all the funds are delivered directly to cybercriminals' hands.

There are many ways how you could get infected with Trojan.BitCoinMiner virus. By definition, a Trojan indicates that a user tried to install something that he believed is harmless, but turned out to be malicious. There are several different instances when such a scenario could occur, for example:

To sum up, the infiltration lies within users getting tricked, as they believe that they are installing something harmless. If the boobytrapped file turns out to be malicious, their security software would immediately stop the infection. In the meantime, those who do not have a robust security tool installed would have to deal with Trojan.BitCoinMiner removal.

Once on the system, Trojan.BitCoinMiner will begin to generate cryptocurrency, all while showing a variety of symptoms. The immediate impact of cryptomalware might not be significant, if not considering the significant decline in the performance of the computer. Additional changes that malware can trigger in the system may affect the performance of the OS significantly, so rely on ReimageIntego and make sure to repair affected or corrupted files.

However, Trojans can be programmed to perform a variety of tasks, so there is a chance that other malware can be installed as well. As a result, victims might suffer from such consequences as banking credential exposure to malicious parties or even identity theft. You need to fully remove Trojan.BitCoinMiner to get rid of any additional malware installed behind your back. Use anti-malware tools and clear infections thoroughly. 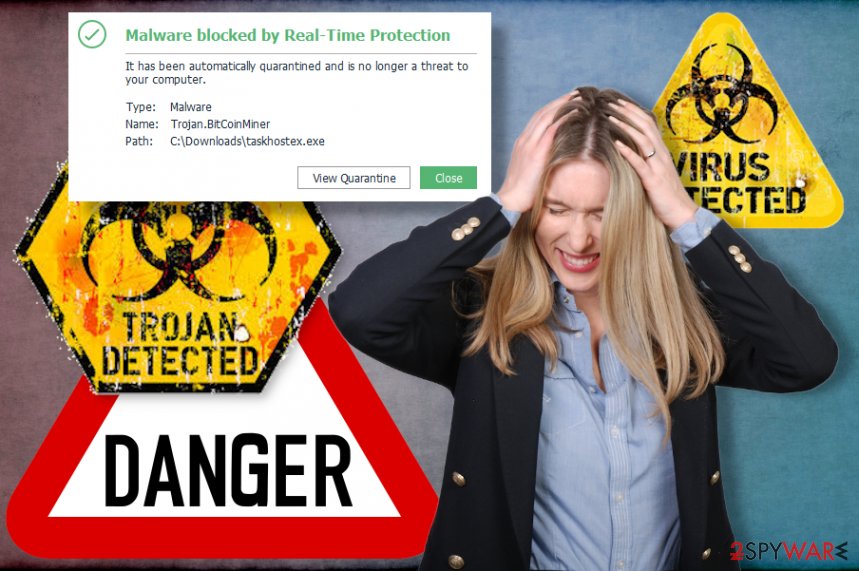 Trojan.BitCoinMiner - malware that focuses on getting cryptocurrency from users or using their devices to mine the Bitcoin.

Trojans can appear as an attractive program, screensaver, an application, or an update to one. It gets installed behind the users' back and triggers needed processes, runs programs that affect the system but do not trigger any symptoms. Unfortunately, once malicious program or file gets downloaded and open, the trojan can perform anything that author designed it for.

Spam email notifications can include links to malware pages, hacked sites, direct documents containing the malicious script, or a macro virus coding. Experts[3] always note that any material online can be dangerous, especially sites and emails that you are not expecting to get or are familiar with.

Pay attention to questionable senders and sites that display suspicious material. Any links on Financial-themed email messages should be taken seriously. If you are not using the service or the company that sends you invoices is not the particularly known product or service provider, you should be suspicious. Delete any emails that are not waited and make sure to ignore shady senders.

The generic detection of the Trojan.BitCoinMiner identification

This particular Trojan.BitCoinMiner virus detection result appears on the screen when the machine is infected by the trojan malware. Even though such threats mainly infiltrate and run in the background, your AV tools indicate the danger automatically.

If the anti-malware engine that you have shows this result, you need to remove Trojan.BitCoinMiner using a powerful AV engine like that. Other security tools like SpyHunter 5Combo Cleaner or Malwarebytes can also help, but make sure to check the PC with a few alternate tools to get the best results.

After the Trojan.BitCoinMiner removal and system cleaning, you may need to repair functions or programs additionally. Trojans can migrate on the machine and inject scripts that damage the machine, files, functions. So rely on PC repair applications like ReimageIntego and recover functions properly.

Reboot the system in Safe Mode to find all threats using AV tools and clean off all the traces of the Trojan.BitCoinMiner virus

Finally, you should always think about the protection of crypto-ransomwares. In order to protect your computer from Trojan.Bitcoinminer and other ransomwares, use a reputable anti-spyware, such as ReimageIntego, SpyHunter 5Combo Cleaner or Malwarebytes

Your opinion regarding Trojan.Bitcoinminer Cancel reply

You can quickly scan the QR code with your mobile device and have Trojan.Bitcoinminer manual removal instructions right in your pocket.