VBS:Malware-gen is a virus that is capable of modifying targeted system settings for malicious purposes 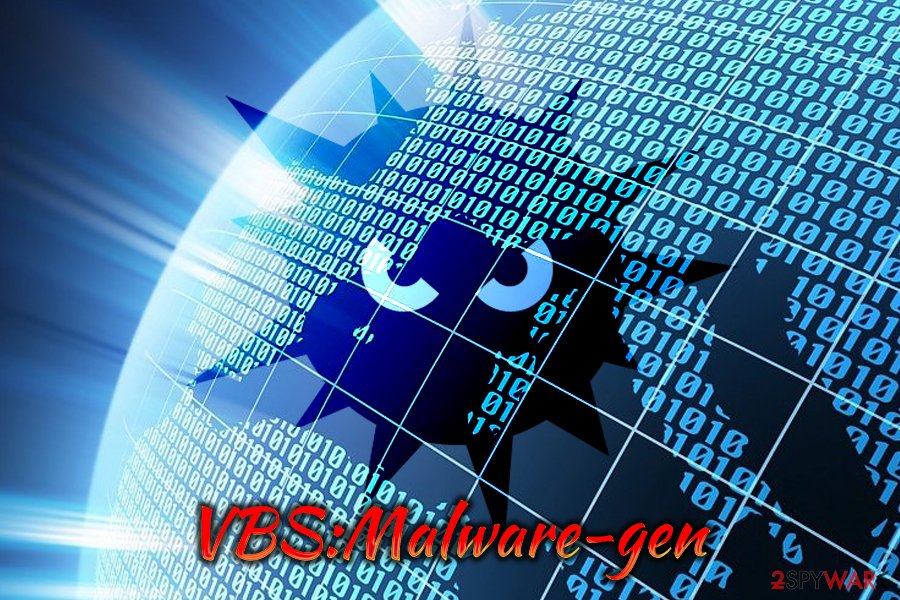 VBS:Malware-gen is a generic name used for various trojan horses. The threat can range from harmless ads display to straight out data stealing, remote computer access, and other malicious activities. Additionally, malware can serve as a backdoor[1] to other malware, such as self-propagating worms. VBS:Malware-gen trojan usually enters computers without users noticing, and hackers use such distribution techniques as exploit kits,[2] weak passwords, open RDP, spam emails, and other tricks, often including social engineering techniques. While most detections by AV engines are legit, users have reported that certain anti-virus tools detected regular system files as false positive.[3]

Since VBS:Malware-gen represents a variety of different computer viruses, it is hard to speak about its traits. Nevertheless, we will try to describe the typical behavior of a trojan horse, which would help you detect and remove VBS:Malware-gen from your machine.

Once VBS:Malware-gen enters the targeted computer, it performs a series of changes, which can range from:

Malware performs these change to accomplish the goal it is set to do: steal data, turn the computer into a spam machine, redirect to sponsored websites, and similar. Crooks behind malware always seek for personal gain, and they do not care what the user have to through. VBS:Malware-gen can result in permanent data loss if it lets in ransomware virus in.

Additionally, stolen personal information such as banking details and other credentials can be sold in the black market for profit. It goes without saying that the presence of VBS:Malware-gen can significantly compromise your online safety, as well as computer security.

Unfortunately, trojan horses rarely produce any symptoms. This complicates VBS:Malware-gen removal procedure, especially for those who do not use comprehensive security software. Thus, experts[4] highly recommend downloading and installing anti-malware software, such as Reimage Reimage Cleaner Intego or SpyHunter 5Combo Cleaner, which would prevent most of the malicious applications from entering the PC.

As we already mentioned, security software forums are filled with reports of AV engines recognizing several legitimate processes as VBS:Malware-gen. In such a case, it is a false positive and should be ignored. If users proceed with certain file removal, they can damage the system or prevent it from functioning correctly. 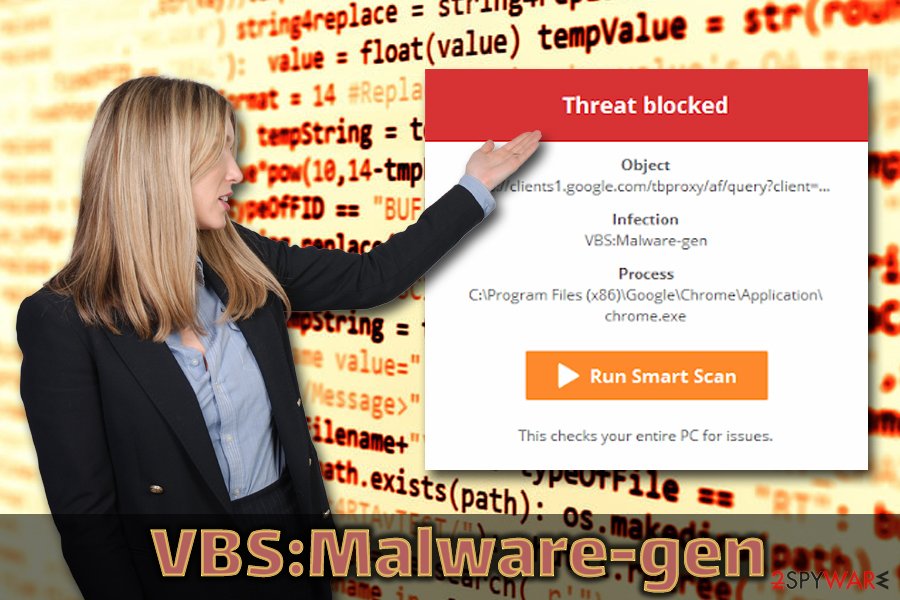 VBS:Malware-gen is a trojan horse that can infiltrate machines without users noticing and steal personal data or inject additional malware

Trojans should be avoided at all costs

While no method would protect your machine from infection completely, there are several things you can do to improve its security and reduce the chance of virus infiltration. If you think that you are immune to infections, you are wrong, and even those who never been affected by malware usually face their first time at some point.

Trojan infection is a severe risk, and it should be taken care of as soon as possible. Of course, to remove VBS:Malware-gen virus, you will have to employ reputable security software. We suggest you download and install tools like Reimage Reimage Cleaner Intego, SpyHunter 5Combo Cleaner or Malwarebytes and run a full system scan. Beware that some malware might hinder proper operation of security software. In such case reboot your PC and enter Safe Mode with networking – it will temporarily disable the virus.

Do not even try manual VBS:Malware-gen removal. Malicious software is embedded deep within the system, and restoring the machine to its previous state is a mission impossible for a regular user. Therefore, merely trust security software to do the job for you instead.

Finally, you should always think about the protection of crypto-ransomwares. In order to protect your computer from VBS:Malware-gen and other ransomwares, use a reputable anti-spyware, such as Reimage Reimage Cleaner Intego, SpyHunter 5Combo Cleaner or Malwarebytes

Your opinion regarding VBS:Malware-gen Cancel reply

You can quickly scan the QR code with your mobile device and have VBS:Malware-gen manual removal instructions right in your pocket.